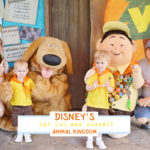 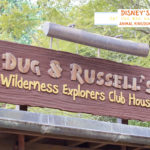 Find out all about finding other characters like Russell and Dug from Disney and Pixar’s Movie, UP! in our Ultimate Guide to Planning your Disney Holiday!

Meeting Disney characters is the most exciting thing about the magic of Disney parks – and although every interaction in Florida has been fun, there are some that were amazing. Russell and Dug at the Wilderness Explorers Clubhouse was one of those – and it taught our own little Wilderness Explorers a thing or two, too.

WHERE CAN I MEET RUSSELL AND DUG?

On Discovery Island, in the Animal Kingdom Theme park is where you’re going to find the Wilderness Explorers Clubhouse – and it has a little queuing area under shade [hooray!]. It’s worth queuing for.

DISNEY AND PIXAR’S UP!

If you haven’t seen UP!, you really should. Get lots and lots of tissues and watch it with someone who doesn’t mind bawling their eyes out with you. And if you watch it with someone who loves you, and remains dry-eyed, it’s time to re-evaluate your relationship [just kidding]. It’s the most heart wrenching and amazing love story between Carl and Ellie – but I won’t give anything more away. Russell and Dug are central characters in the film and Dug being a dog, and a gorgeous dog at that, I fell in love with him immediately. We even have a plush which says “I only just met you, and I love you.” Awww.

WHAT MADE THIS MEETING SO SPECIAL?

First of all, Disney dogs are the best. Secondly, we’d dressed the boys in little homemade Wilderness Explorer costumes as we’d been doing the Wilderness Explorers Club Challenges around the park that day too. So we queued and I had in my pocket something for the boys to give to Russell. It was an Ellie badge we’d bought on Etsy.

So when it was out boys’ turn to meet Russell and Dug, they wandered over [read: ran. Lyoto ran with his little 20 month year old legs, full force at every character he met] to meet them and hug. Then I prompted Jensen to give Russell the badge and it was beautiful. I mean, cry my eyes out amazing. Russell was beside himself and the interaction was FANTASTIC. It felt like it lasted forever, and when we came away, Jensen said he made Russell happy so he was happy. Wahhh.

WILL DISNEY PHOTOGRAPHERS BE THERE?

I’m going to say usually, yes. For us, no. In fact, I’m surprised I had any photos as I was crying so much – but I’m glad I managed to actually snap some as the Photopass man disappeared minutes before we were meeting them. Thankfully the cast member took a shot of us together on my camera. Always ask, they’re always happy to help out!

Even if your little one isn’t into autographs yet, those that have an autograph book with them inevitably get to spend a little more time with each character. We take a big book and chunky Sharpies with us. Russell was Gav’s favourite as he knew who Lyoto was named after [Lyoto Machida, MMA fighter] and they had a manly bonding time together. Haha.

Any Disney photo is an amazing photo – but it’s more fun to have photos of you posing in stances to remind you of the fun you were having. Dug was brilliant and was trying to get them to make Mickey ears. I wanted to take Dug home, he was just so adorable with the boys.

OUR ULTIMATE GUIDE TO PLANNING YOUR DISNEY HOLIDAY