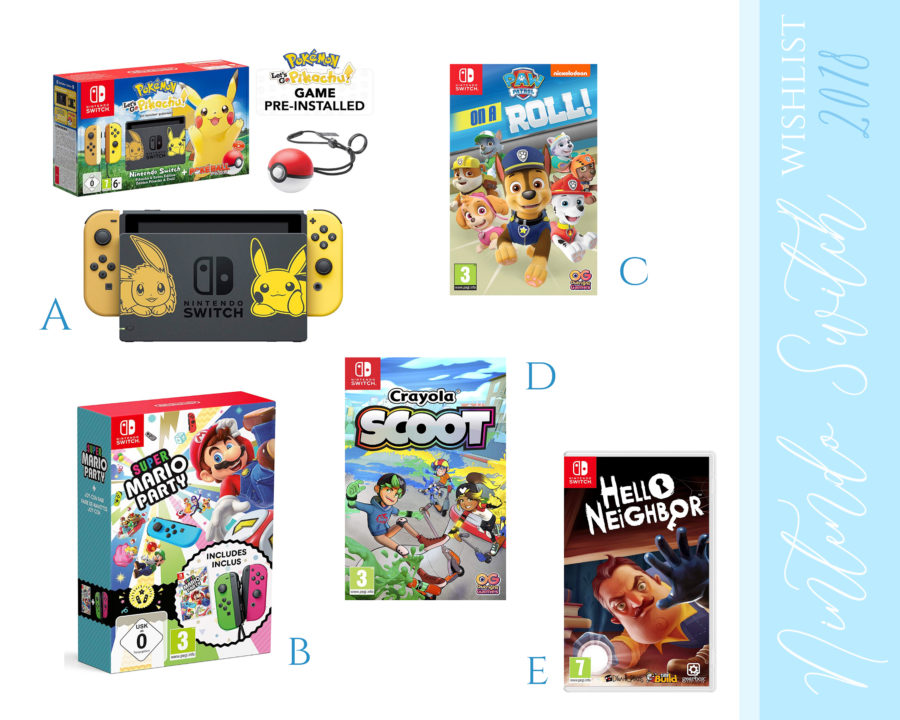 It’s our Nintendo Switch Wishlist!  Only a terrifying 14 days until Father Christmas makes his trip around the world and as seems to be the case quite a bit these days, I am SO far behind on any kind of readiness it’s laughable.  Plus, getting out of the boys exactly what they actually, genuinely would love for Christmas as opposed to what they’ve just seen on TV or YouTube that day is very difficult which slows me down quite a bit.  Also, finding out what their little hearts desire and not giving the game away is getting harder as they get older.  However, that being said, they don’t have the newest, fanciest consoles or games and have been very far behind when it comes to the gaming world and although I’d be fine with that ordinarily, I’d actually rather they were playing the games themselves than watching people on YouTube play the games.

So I told the boys that I was working on a gift guide for boys who love Nintendo Switch games and I asked them to imagine what they would get if they could only pick their top five – and one of them had to be a Nintendo Switch console.

A – Nintendo Switch Let’s Go Pikachu Limited Edition Bundle – Ever since Dan TDM featured this on YouTube, it’s been all we’ve heard about.  Complete with Pikachu and Evee themed Joy-Con controllers, a Nintendo Switch Dock, a digital copy of Pokémon: Let’s Go, Pikachu! and a Poké Ball Plus controller, this is the top of Father Christmas’ list this year.    I don’t know about the boys, but after watching Pokemon on TV for YEARS now, I’m ready to feel like a Pokémon trainer with the Poké Ball!

B – Super Mario Party [including neon Joy Con] – we included this because we have three boys and my poor ears can’t take them complaining over whose turn it is, who held the controller the longest, who breathed over it and who gave it a sideways glance – you get the idea.  So four player games are the way to go for us most of the time!  Super Mario is my favourite childhood computer memory [I can still remember getting the first Nintendo Entertainment System from Father Christmas when I was little] and there are over 80 mini-games to play that I cannot wait to have fun with!

C – Paw Patrol On A Roll.  Remember this game from the Twitter Party?  It was so much fun and the boys loved roll playing the Pups on missions and winning Pup treats.  It’s a gorgeous, colourful game which is suitable for Hero to play at 4 years old without getting frustrated.

D – Crayola Scoot.  This is the first Crayola game in 14 years and the second Outright Games title the boys asked for – and given we have so many Crayola products in our house, I figured this was one that wasn’t going to make any mess at all!  Themed in a scooter park, the aim of the game is to become the Crayola Color Cup Champion by competing across three worlds.  I love that this is a game where everyone in the family can play, and there is no online play.  I’m not keen on the boys having that function available and so I feel safe letting them play this one – and even safer that I know there won’t be any inappropriate content in a Crayola game!  This is made by Outright Games, like the Paw Patrol On A Roll that we played last week at the Twitter party.

E – A controversial one, Hello Neighbour.  Never would I have considered this game for the boys had it not been for them watching hours of the footage with Dan TDM and FGTeev on YouTube, and now I too want to see what it’s like.  We’ve waited for it to arrive on Switch from Desktop in the USA and just as it does, the new version, Hello Neighbour: Hide and Seek has been released. At least now when we’ve finished the game [if we can], we have something to go on to!

We’ll be reviewing these games in separate posts after Christmas if you’re Switch novices like us, or if there are any you haven’t played yet!  If you’ve got any recommendations for us, drop us a line! 🙂

A CHRISTMAS GIFT GUIDE BY A SEVEN YEAR OLD BOY

WISE[ISH] WORDS FOR THE JONES BOYS
« CHRISTMAS GIFT GUIDE FOR HIM 2018
HP CHROMEBOOK 14 REVIEW: A LAPTOP FOR LYOTO »