SUBSCRIBE TO OUR NEWSLETTER FOR SIX SECRETS TO AN EGG-CEPTIONALLY FUN EASTERTIME AT HOME!
You are here: Home / GAMES AND TOYS / OREGON SCIENTIFIC SMART GLOBE MYTH: THE REALITY 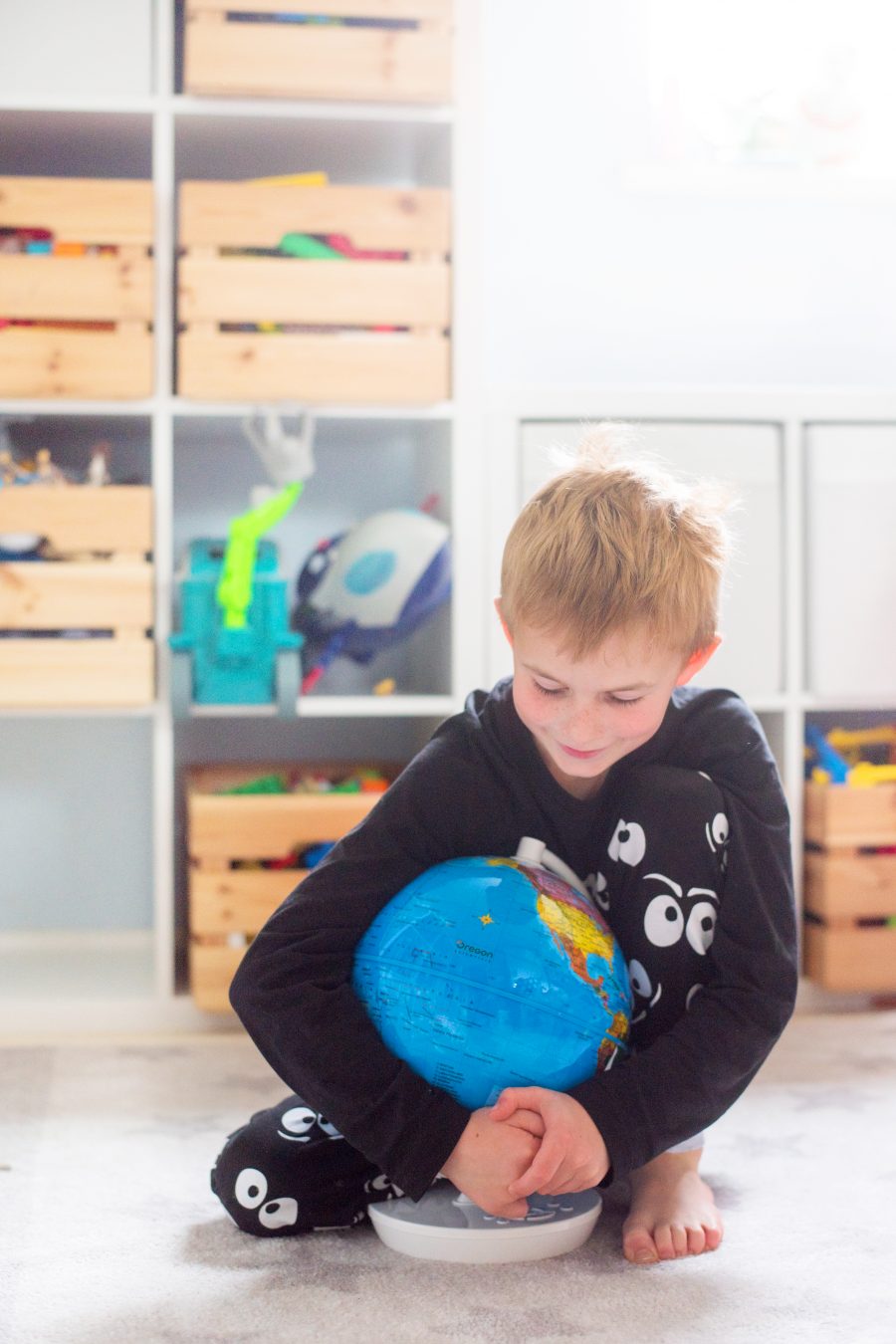 Last year we were very excited to review an Oregon Scientific Globe and since we’ve had it, it’s been used for every homework possible and the boys love showing it to their friends because, well, it’s amazing.  This week we were offered the chance to review another globe of theirs – the Oregon Scientific Smart Globe Myth – and although you’re probably thinking, “why on earth do they need another globe in their teeny home?”  it’s because this is no ordinary globe. This is a globe with secret or two.

The Globe has itself is about a foot in height and stands on a little white base with buttons on it.  It has two, well, three modes really. 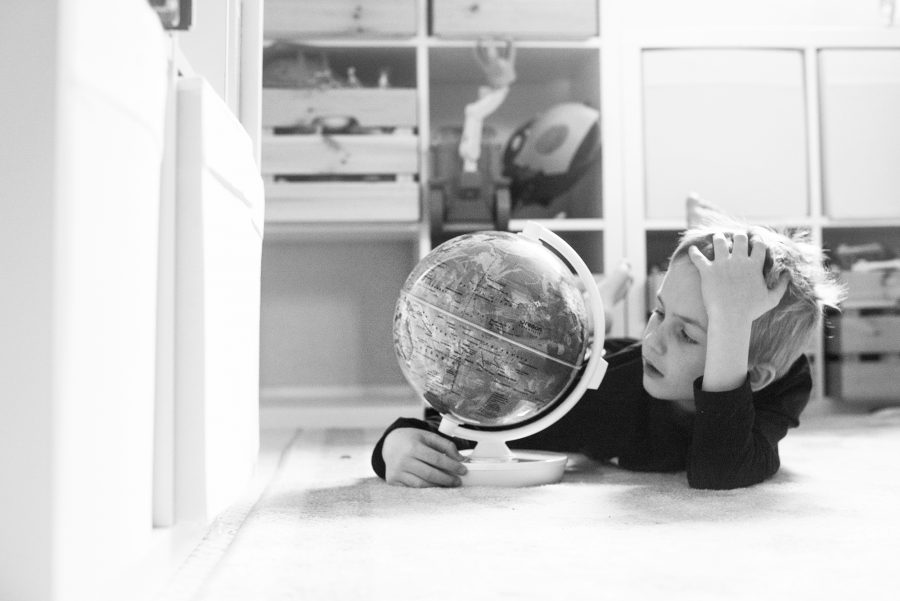 There’s daytime mode, when the globe does what all good globes do and teaches about continents and countries, capitals and the like – and also has some audio facts about the earth that can be accessed by a button on the stand of the globe. 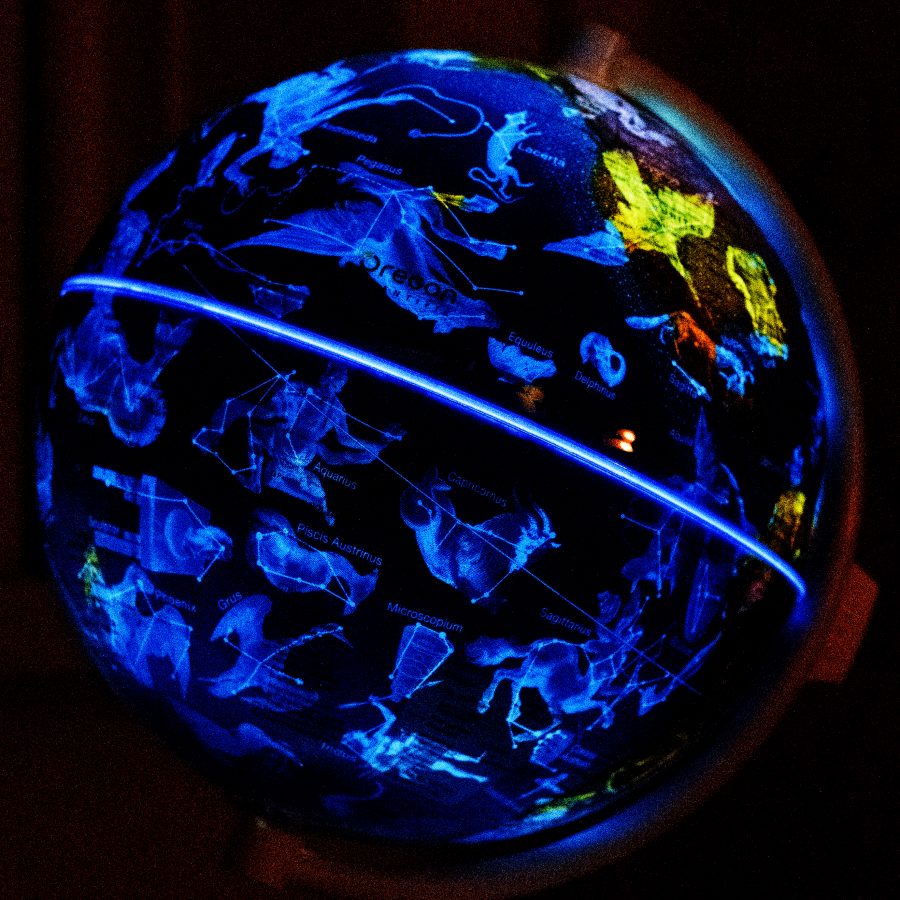 In night mode, the globe can be switched on like a light with three different brightness levels, and shows the night sky.  This left our boys open-mouthed as the lit up illustrations can’t be seen in daytime mode, just like in real life. They seem to appear from nowhere and it’s magical!  There are planets and stars, and apparently there are 88 beautifully illustrated constellations.  And in addition to the pretty constellations covering the globe, there’s also a button on the stand which when pressed tells 12 constellation myths – stories of all of the star signs they’ve seen in Granny’s magazines.  The boys had never heard any of these before and were completely amazed. 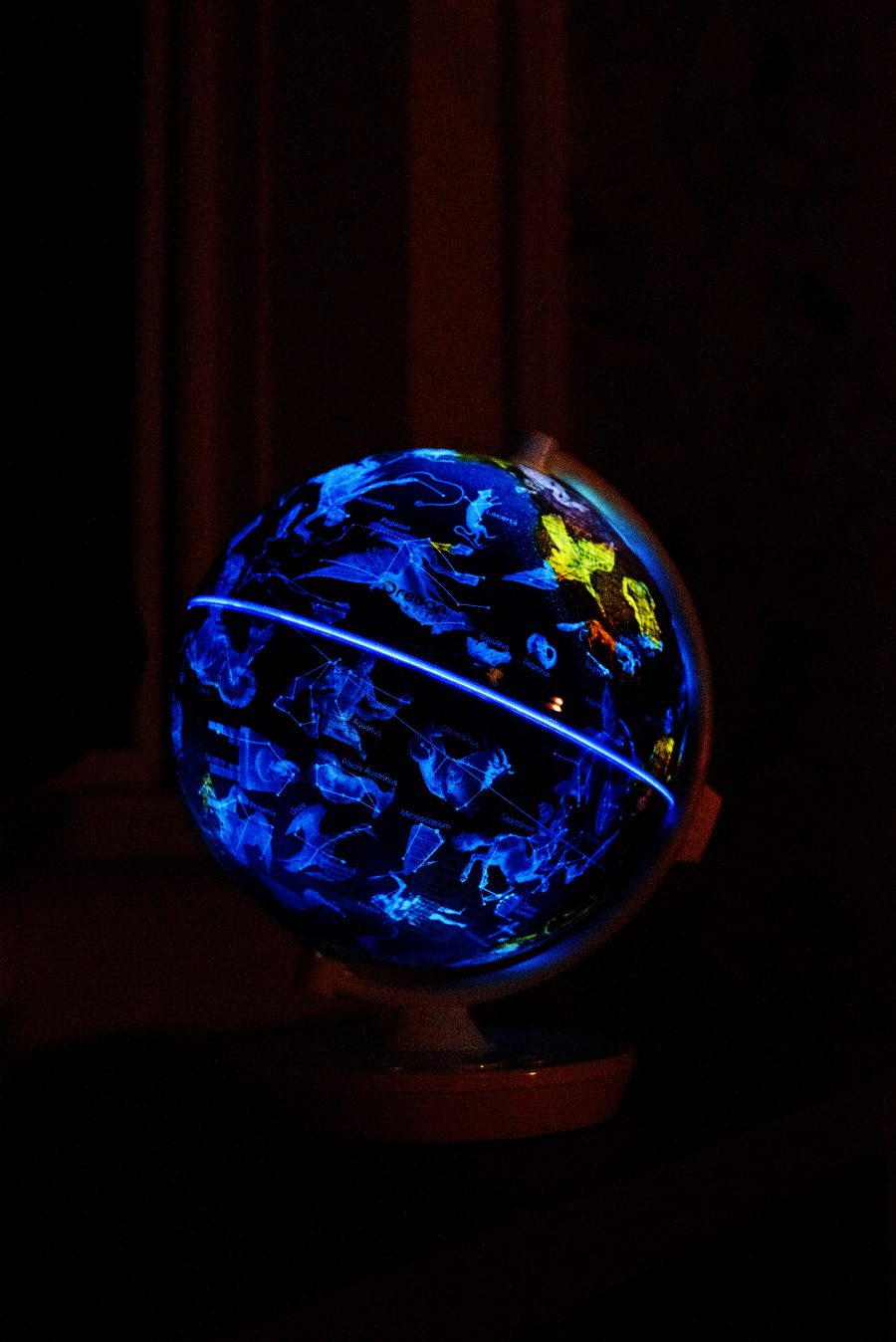 The third mode [I’m calling it a mode] was just crazily exciting for the boys. Augmented Reality using the app which you can download.  We saw animals and dinosaurs so far, but there’s even more to discover! Once the app is downloaded and loaded up, hold your phone in front of the globe and it detects and scans the globe, then shows the magic, superimposing the 3d one to the globe.  You can select different items [like a dinosaur] that you see to learn about them.  Honestly, I never got a look-in, there was so much excitement about it all, but I’m going to when they’re asleep. 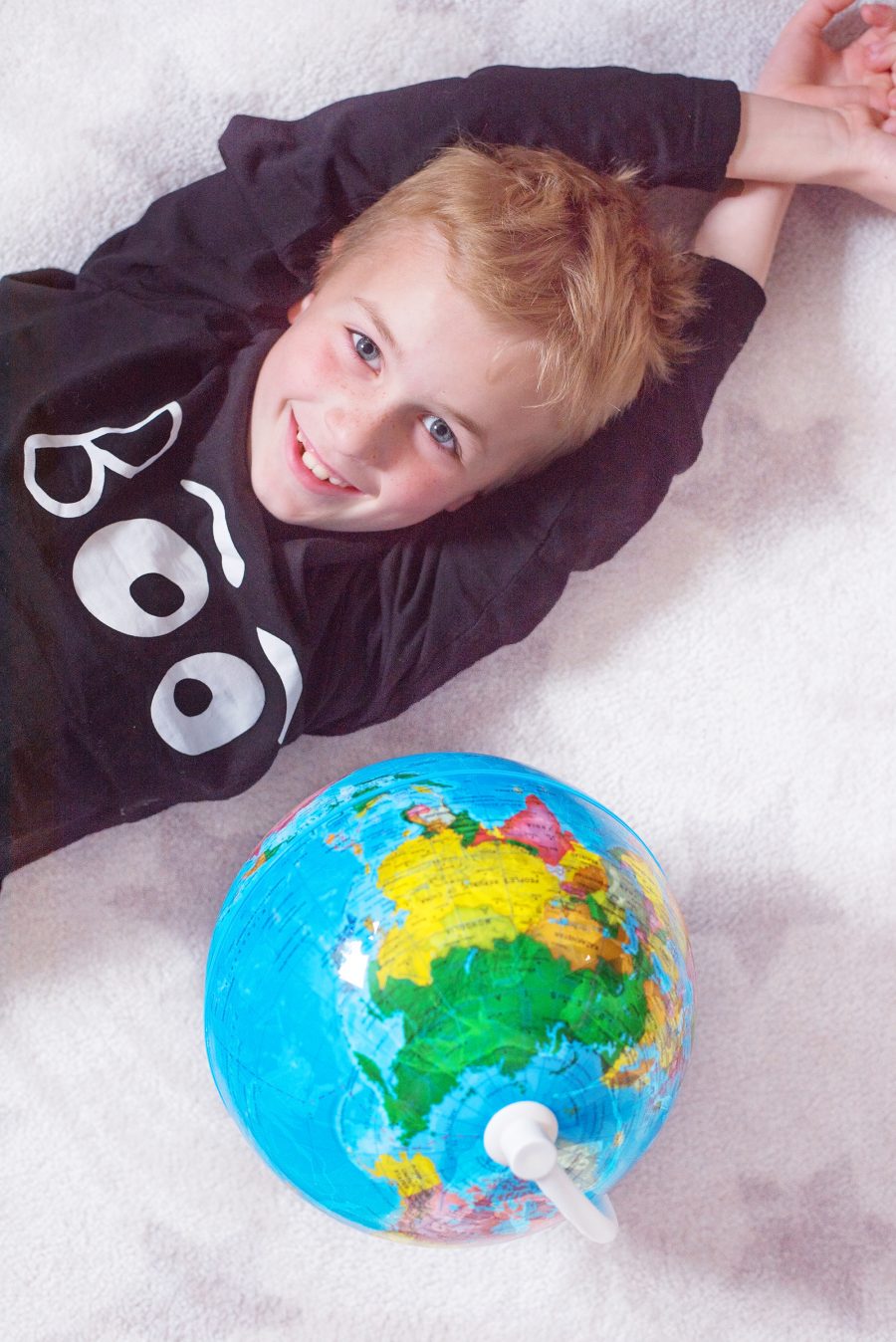 On the base of the globe, there are a few more buttons.  Our favourite one this evening has been Fairy Tales, which once pressed means that the globe will tell a fairy tale to you, like a bedtime story.  Each of them can be cycled through with the arrow buttons and you can choose from:

All of these tales are so well loved in our family and even I loved listening to the American accent telling me all about the Three Pigs.  Haha.

It’s a brilliant globe and a wonderful investment, perfect for little ones to learn a little bit more than just where in the world they are. 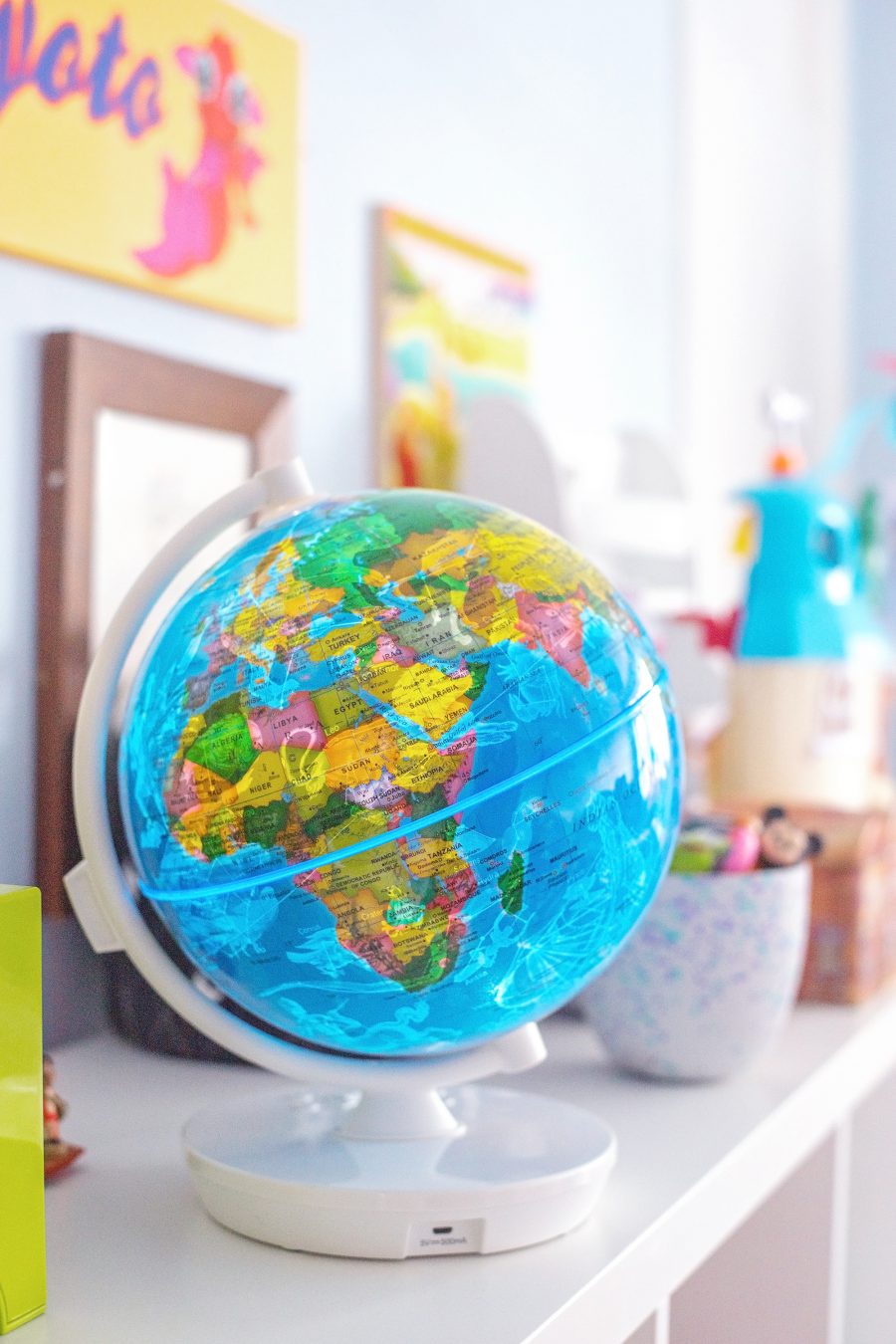 That it comes needing no assembly whatsoever.

The 3D AR is amazing fun.

That it can tell bedtime stories for Hero, and constellation stories that the boys had never heard before but love.

That it doubles as a cosy night light.

The size is big enough to see everything in clear detail, but not so big as there’s nowhere to put it.

That using the arrows you can cycle through the stories and not have to listen to them all back to backhand the pause button means it any needs the bathroom mid story, it’s okay! 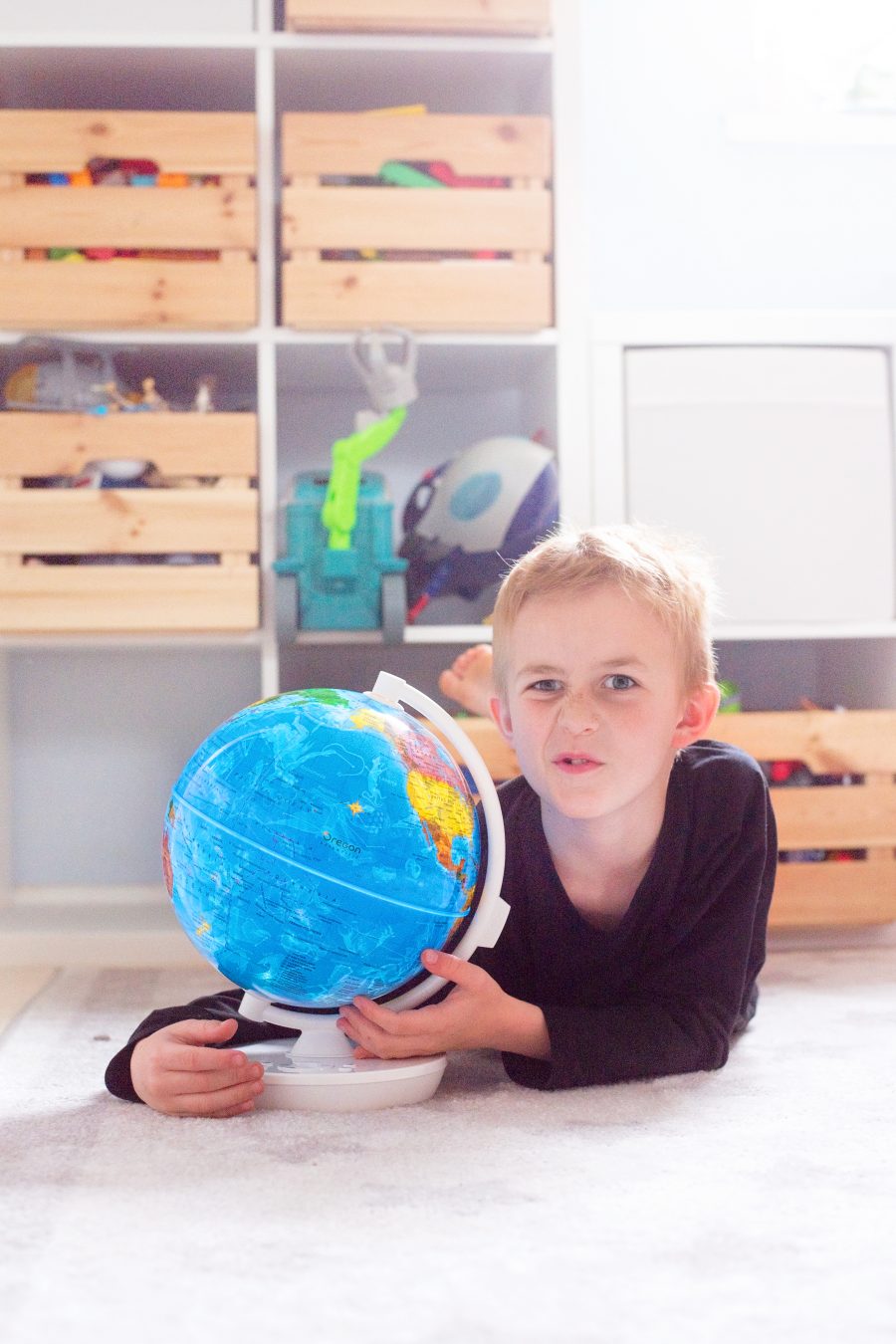 The AR was a little easier to use when scanning the globe.

That there was a mains adaptor for the Oregon Scientific Smart Globe Myth – there’s a USB one, though.

So what did I think of the Oregon Scientific Smart Globe Myth as a mom?  I love it.  I highly recommend Oregon Scientific Globes and as a former geography teacher, I wish we’d had these in class, they’re just fantastic for encouraging a love of learning.  If I was globe shopping, I’d absolutely be choosing Oregon Scientific above the others.