Disney Dining is one of the highlights from every Disney trip I’ve ever taken, along with Disney Parades.  The words Disney food bring a HUGE smile to my face.  Since I was teeny and had my first rainbow sherbert ice cream in 1986 to a few weeks ago when I had a Spiderweb Burger and Groot Shortbread, I LOVE everything about Disney Dining and when I’m budgeting for our trips, it’s one of our main spending areas.  We’ve been to a fair few Disney Restaurants now and so I thought I’d finally get around to sharing them as I wanted to when we started Disney Dining properly in 2008 at our Wedding Planning Trip [dining in the Grand Floridian kitchens with a personal chef for menu testing, anyone?].  I spend so long googling other people’s Disney restaurant reviews I thought I’d put our Mickey-eared hat in the ring and start with Agrabah Café.

We were in Disneyland Paris for the start of the Summer of Superheroes in June and one of our favourite restaurants there was Agrabah Café.

Hero and I arrived first and had a look around…and found some camel-shaped seats.  There was also a very handy water fountain outside which was much needed because it was H-O-T this year.  We were sweltering in the sunshine and very ready for some air conditioning. 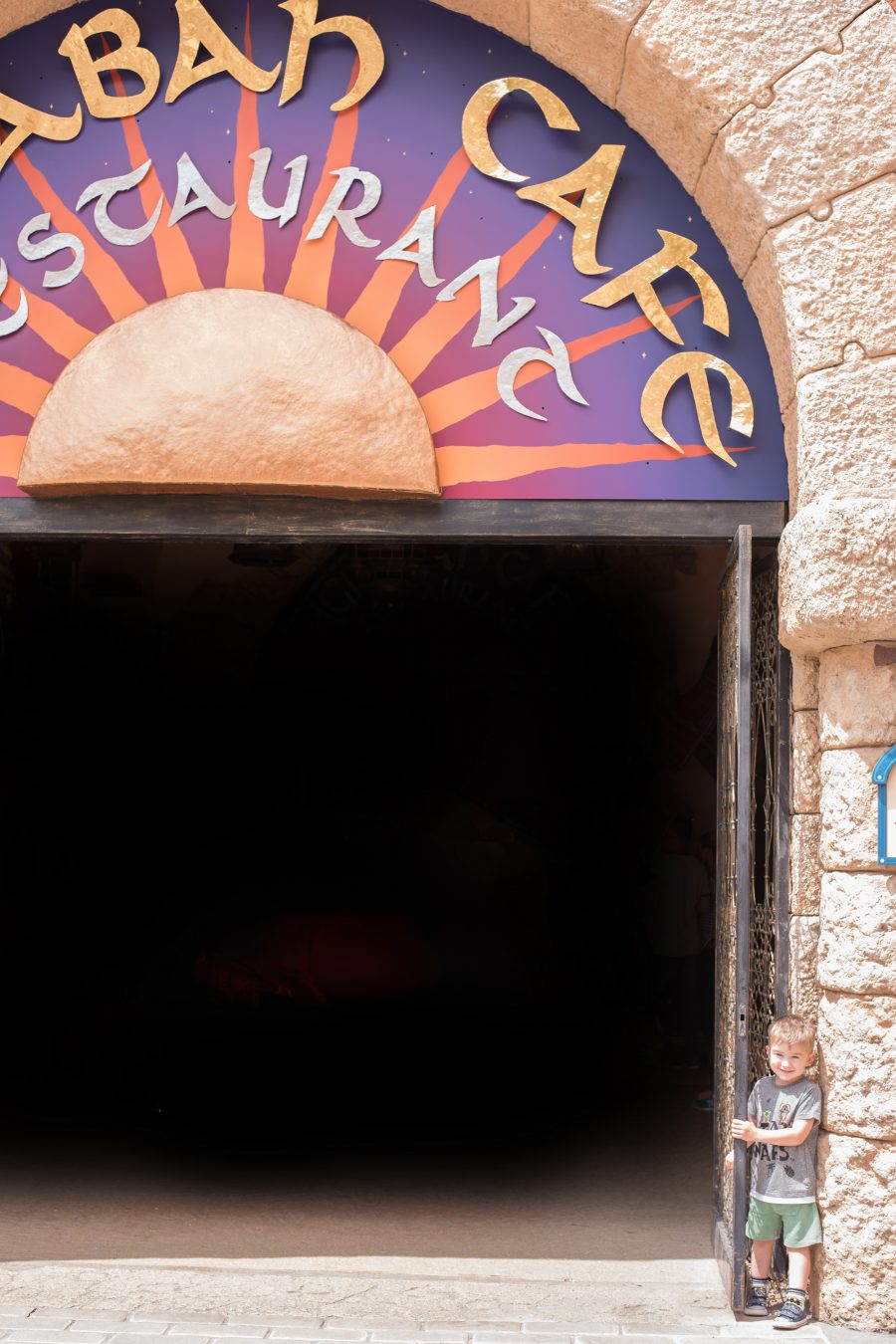 The queuing area where you check in is adorned with beautiful lamps and artwork.  There’s so much to look at which is brilliant because there was a rather large queue of people waiting to see if they could get a seat. 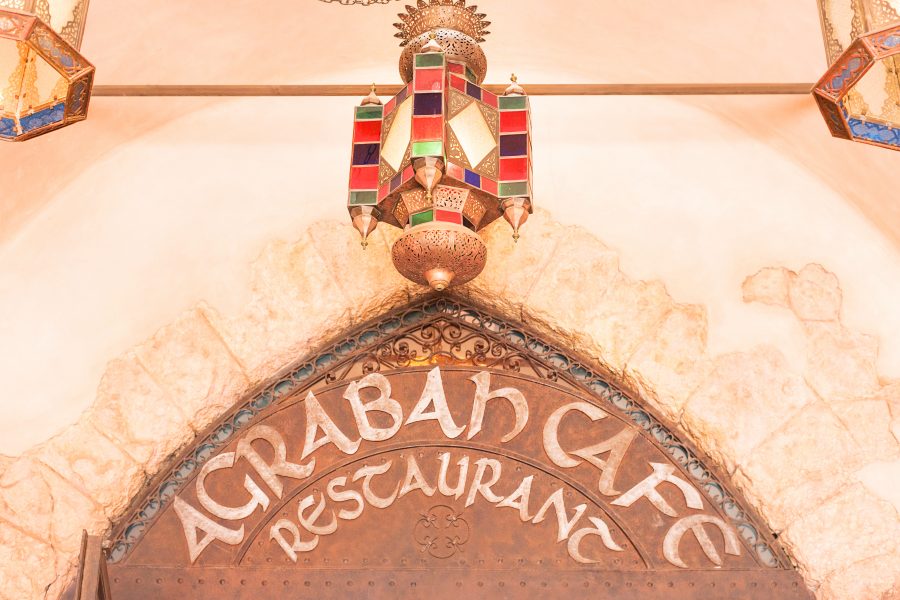 Once checked in, you head through to a beautiful waiting area with a water feature.  It was so quiet, and such a contrast to outside.  The boys calmed down watching the water…a little.  They had fun talking to the Cast Member and ordering which drink they wanted before they got to their table, which we thought was clever.  They arrived and hey presto, their drinks were waiting! 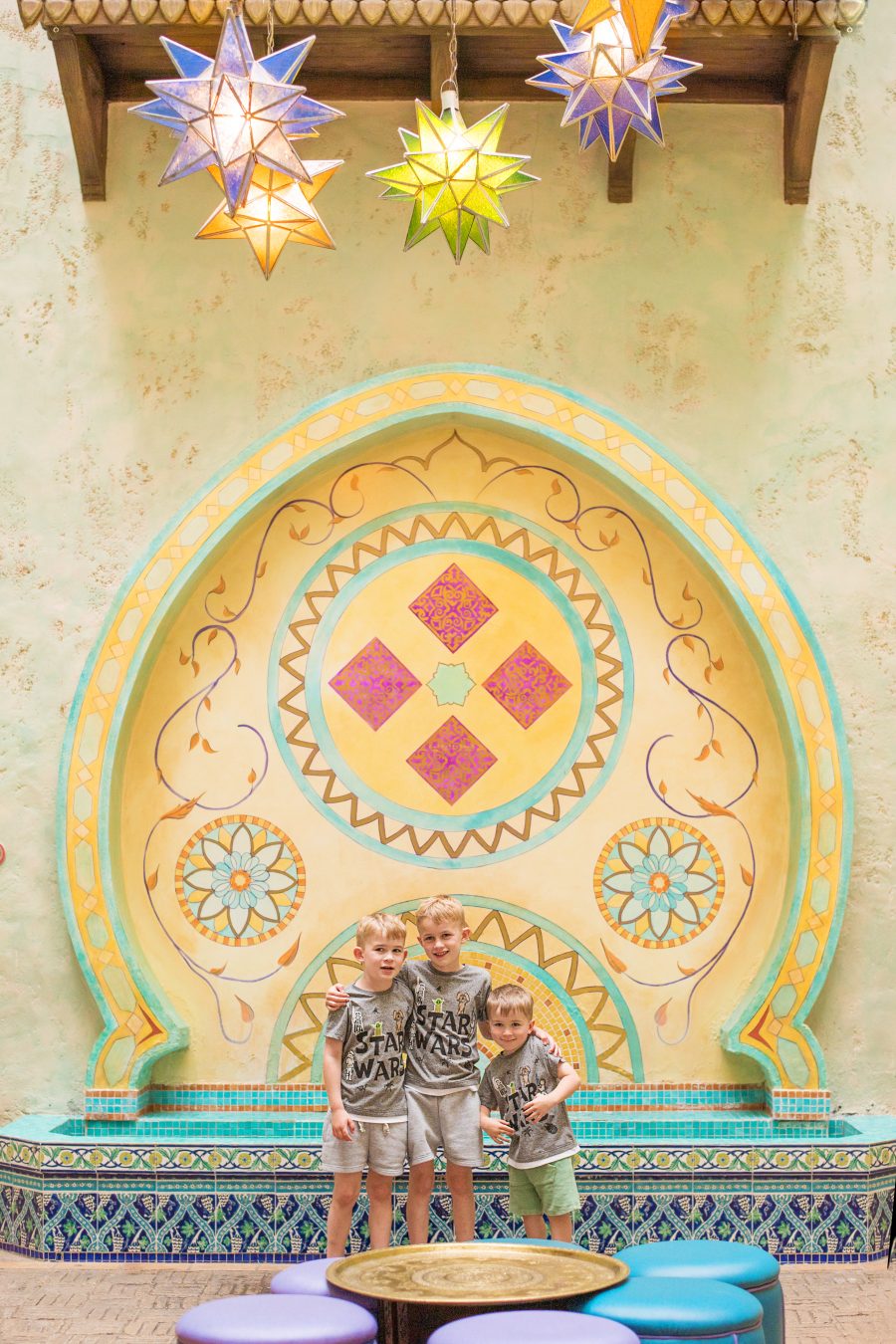 Drinks ordered and once we were guided to our table, sadly in the only room that really needs to be more themed, we went for a little tour around the bazaar.

See if you can spot Rajah if you visit! 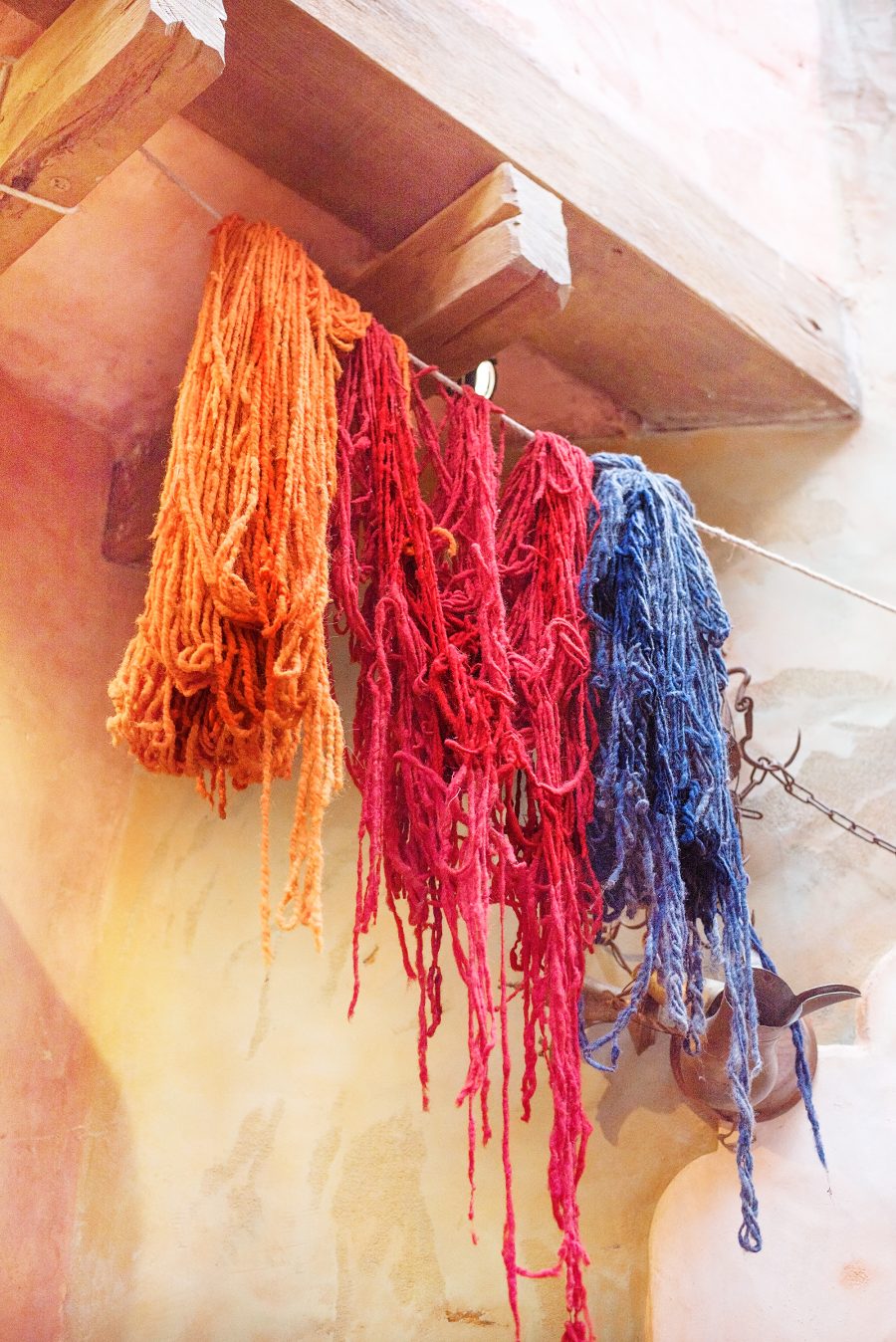 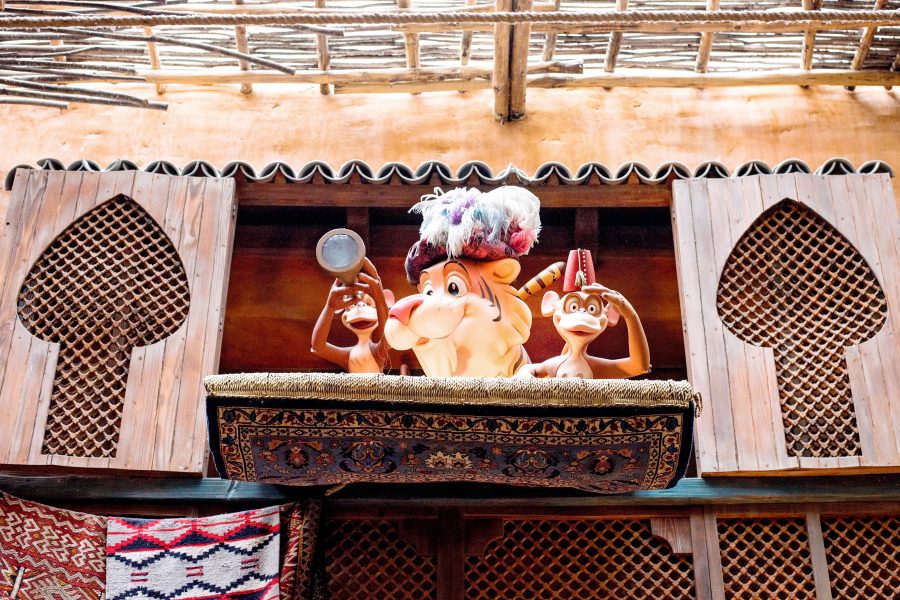 Even though it’s not open in the evenings, this area would be so romantic for a date night! 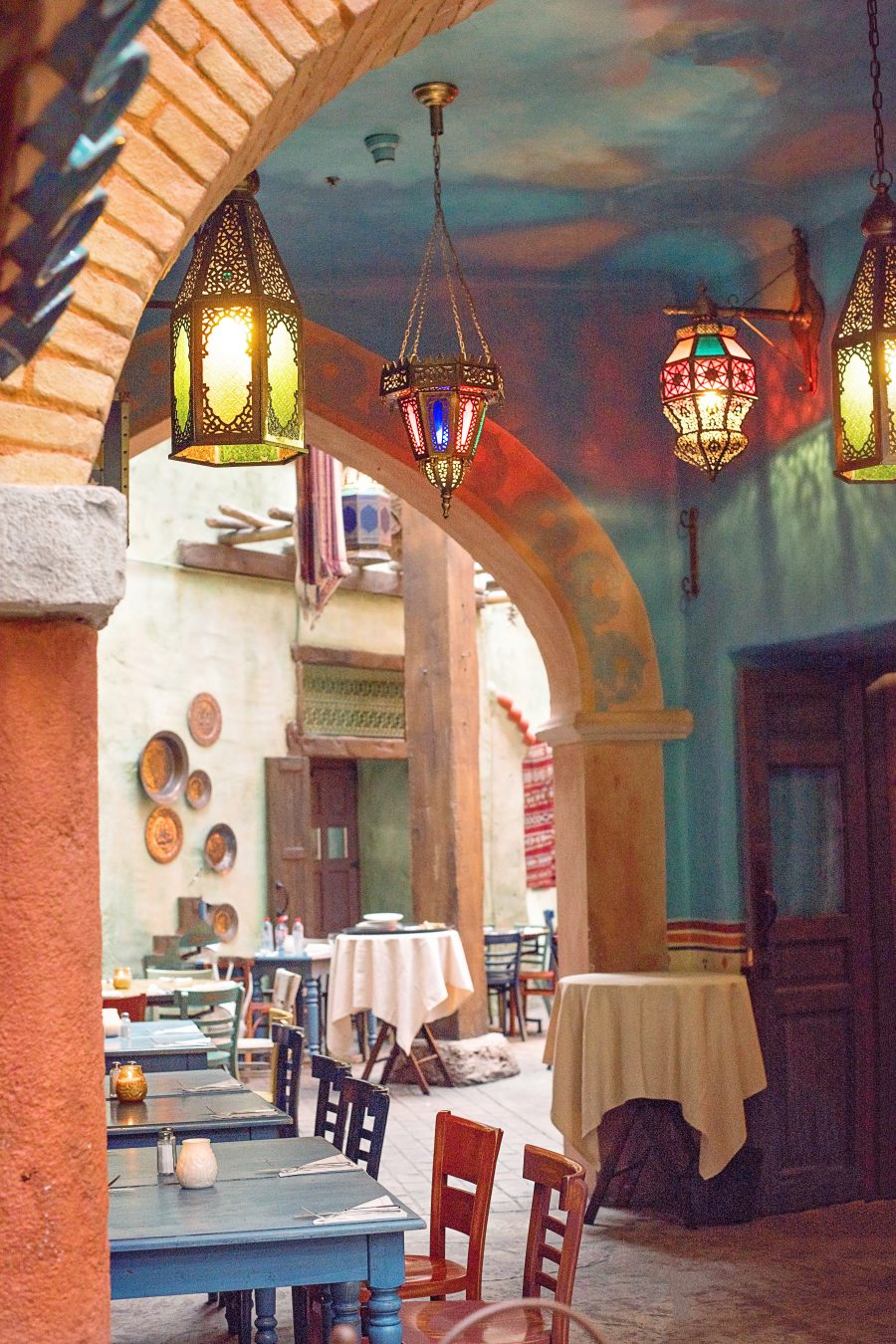 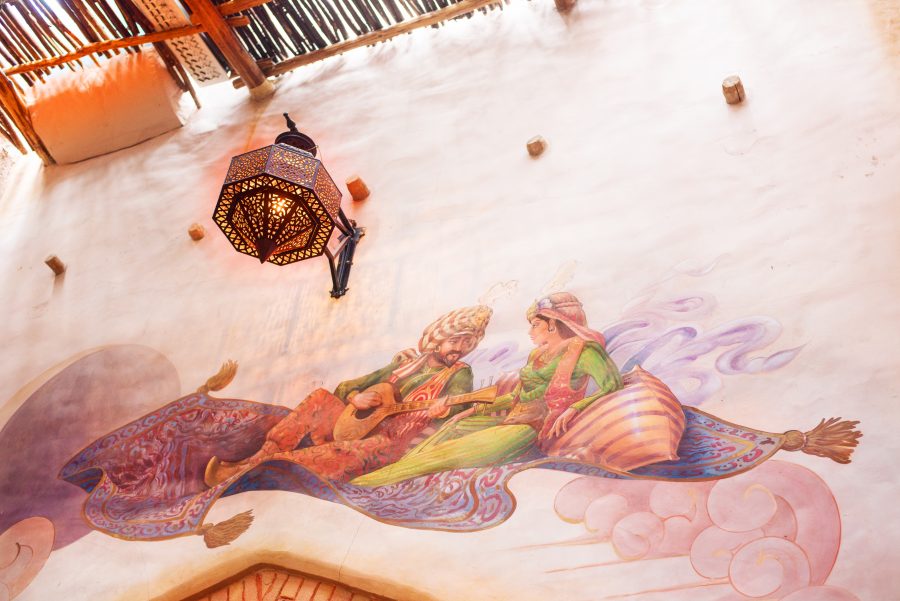 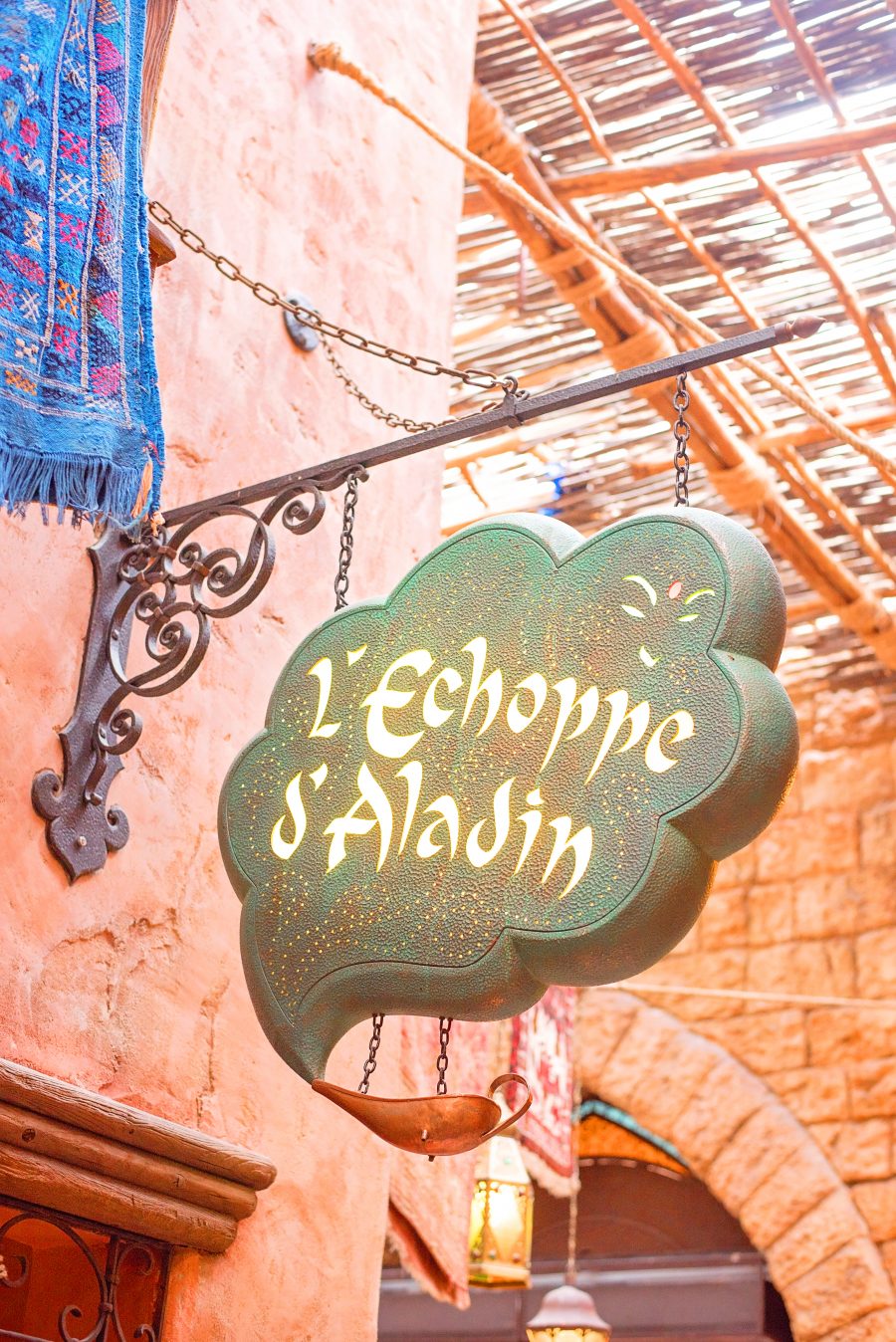 Themed around Aladdin, the café is just inside the gates of Adventureland – wander up Main Street and take a left at the castle and you’re there – it’s a gorgeous [you might hear me say beautiful about 200 times in the video] walk through the streets of Agrabah and an Arabian bazaar, to a marketplace buffet full of foods you’d never, ever think you could get at a theme park.   The theming is so exquisite that there’s no chance you could mistake which film it’s from, even though it was developed into a restaurant by Disney Imagineers from an Arabian themed walkthrough of little shops and scenes inspired by One Thousand and One Nights AFTER Aladdin was released by Disney – if you note the sign in our photos, you’ll see Aladdin is spelled Aladin instead!  *Disney Geek Alert* 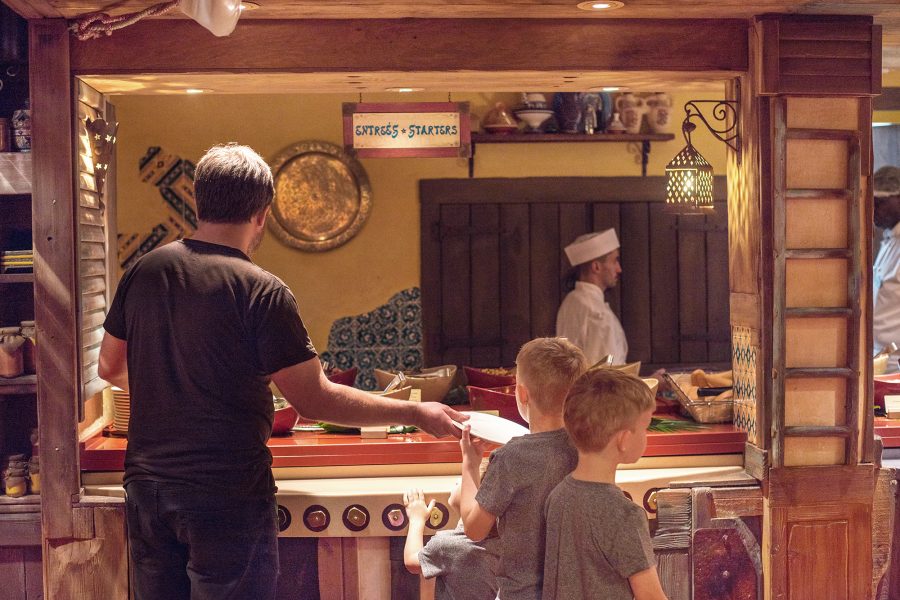 WHAT CAN I EAT?

The food is mainly Mediterranean, Moroccan and Middle Eastern cuisine, but there’s plenty for everyone who’s a little scared to try foods they don’t normally eat – take a look at our video for a tour of the buffet to see what takes your fancy!  Gav was SO excited that he found his beloved Merguez sausages there, and I was in heaven with about everything there as you’ll see on the video.  Haha.

The food is all-you-can-eat and we were so glad we made Disney Dining Reservations beforehand because whilst we were queuing to get in at 3pm, at least seven parties were turned away.  And that was off-peak time.  When you’re in there, there’s SO much to see and everyone was just lovely to us.

Yotie is a picky eater and so he decided to eat…an apple.  The most expensive apple ever if we’d been dining and paying out of pocket, but we were on a free half board Disney Dining Plan and so we filled him with his favourite lunch items beforehand and he just enjoyed the experience.  Jensen tried everything he could, and Hero enjoyed being able to sit in a highchair [he’s never had one, poor soul, haha] and feeling like the Prince of Agrahbah himself.  Desserts were Hero’s favourite, especially the fruit salad and little Moroccan pastries, and pistachio stars. 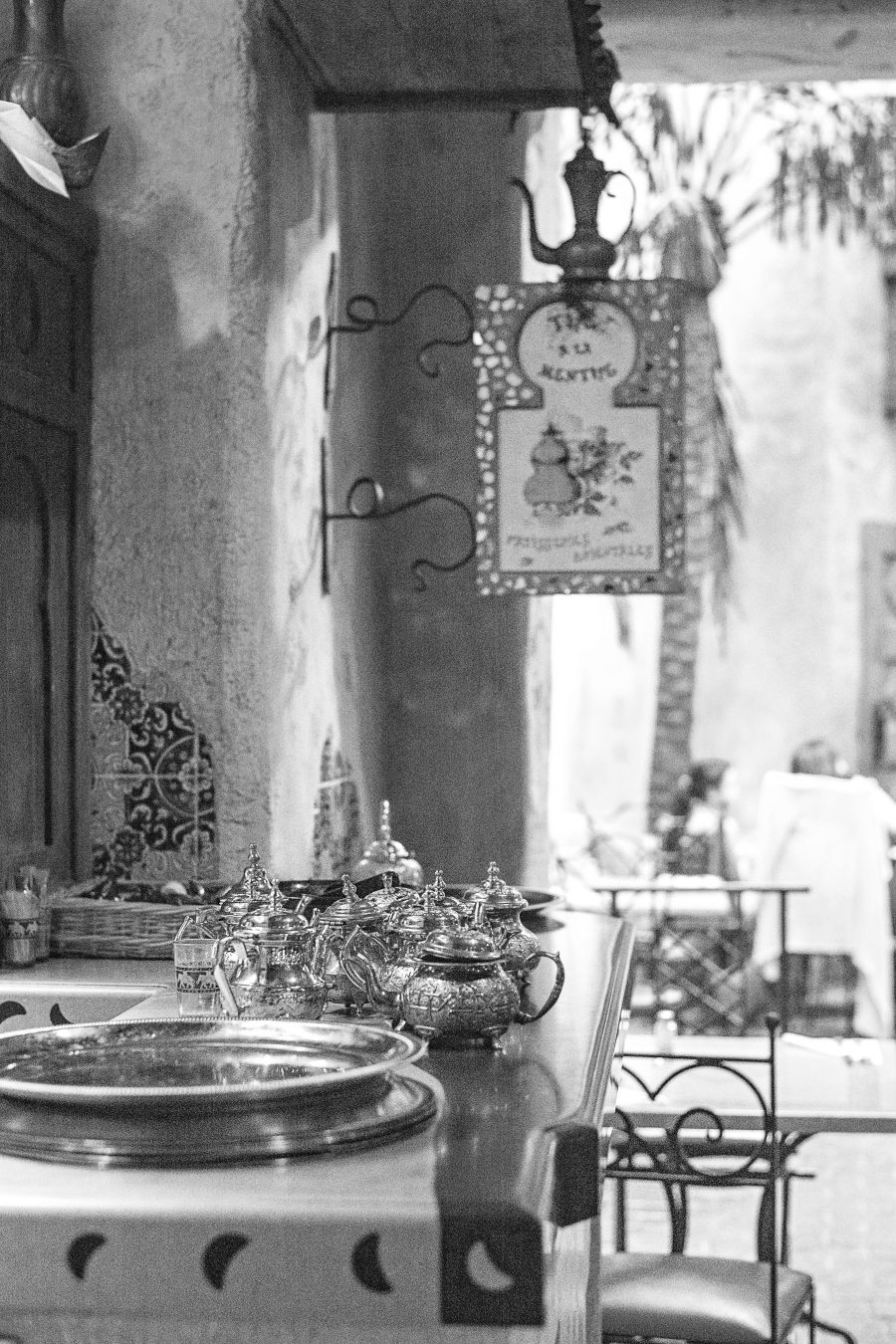 WHAT WILL IT COST ME?

If you have a Disney Dining Plan, you can use a credit for this meal and enjoy a cold soft drink or water too.  Hot drinks, juices and alcohol are extra.  The mint tea costs extra too, but it’s adorable in what looked to Jensen like little genie lamps [see above] and really adds to the experience.

IS IT WORTH IT?

We literally waddled out of the café, it was so delicious.  We bumped into he very naughty Jafar on the way out – and then I made Gav ride Big Thunder Mountain with Yotie and Jens.  We’d absolutely book here again, and ask to sit in the main areas in our photographs this time – it would have added to the atmosphere significantly – and we would have been able to get photographs of the food we chose – the light in our room was just too bad sadly – sorry!  You should get a good idea on the video though 🙂 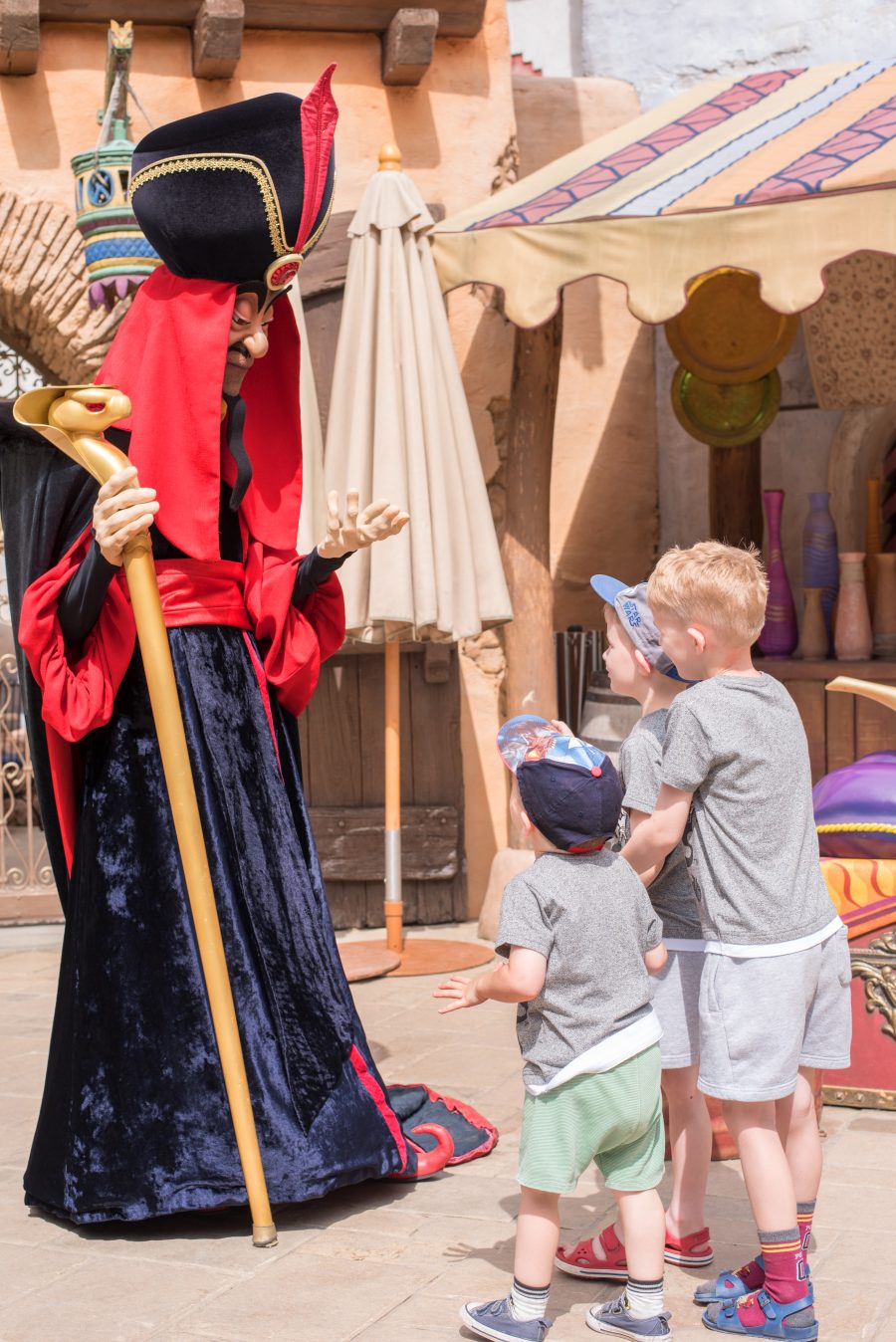 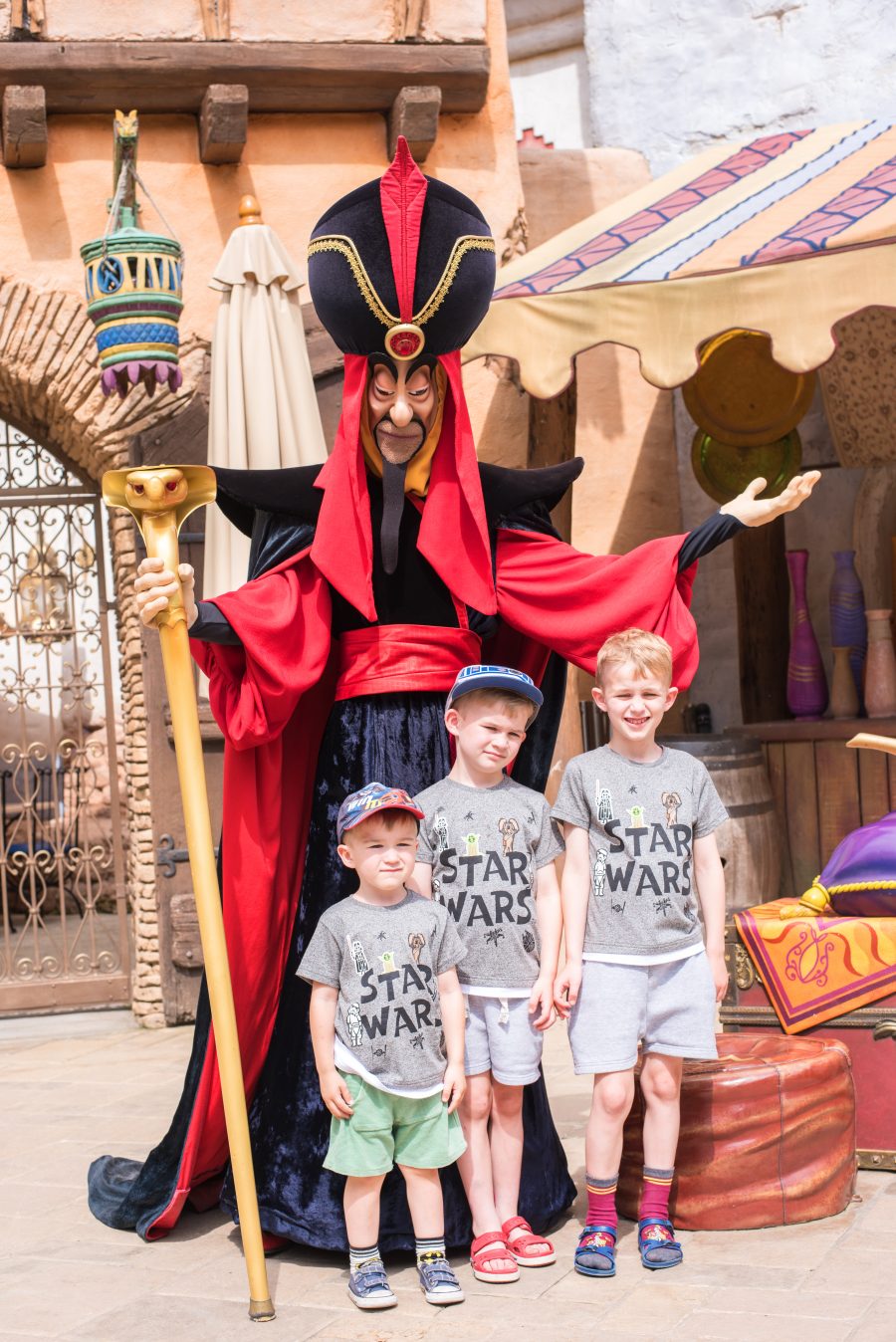 HOW TO PLAN A TRIP TO DISNEYLAND PARIS: PART 1