This post is sponsored by Care Virasoothe Gel for Chickenpox

I heard those words yesterday as I dropped Hero off at preschool for his afternoon of fun in the sunshine: “It’s Chickenpox Season”.  Thankfully mine have now already all had it and I’m far less worried when I hear those words, but still.  Chickenpox isn’t fun.

It’s probably because you’re pretty sure it’s coming for your little ones as soon as they start mixing with other children, and you kind of want them to get it because you know the older they are, the worse they seem to suffer, but you don’t actually want the reality of them having the Chickenpox.  What’s worse is you don’t know they have it, until they have it – there’s no real way of avoiding it and it spreads like wildfire.  No matter how well you think you navigate the waters of childhood and germs, it’s the season for it to be coming for your little ones.

I have the worst, spottiest photos of my boys with the dreaded Chicken Spots [thanks to Mickey Mouse Clubhouse it was made much nicer] but out of respect for them, I’m using photos of them pretending to surf away from the Chickenpox Shark at Bournemouth Beach.  Yes, that’s who he is.  If you’re not sure if your child has Chickenpox, they’re very distinctive little blisters that appear on their body generally first [because it’s warm!] and then the face.  Sometimes there’s just a few spots, sometimes they’re plastered in them. 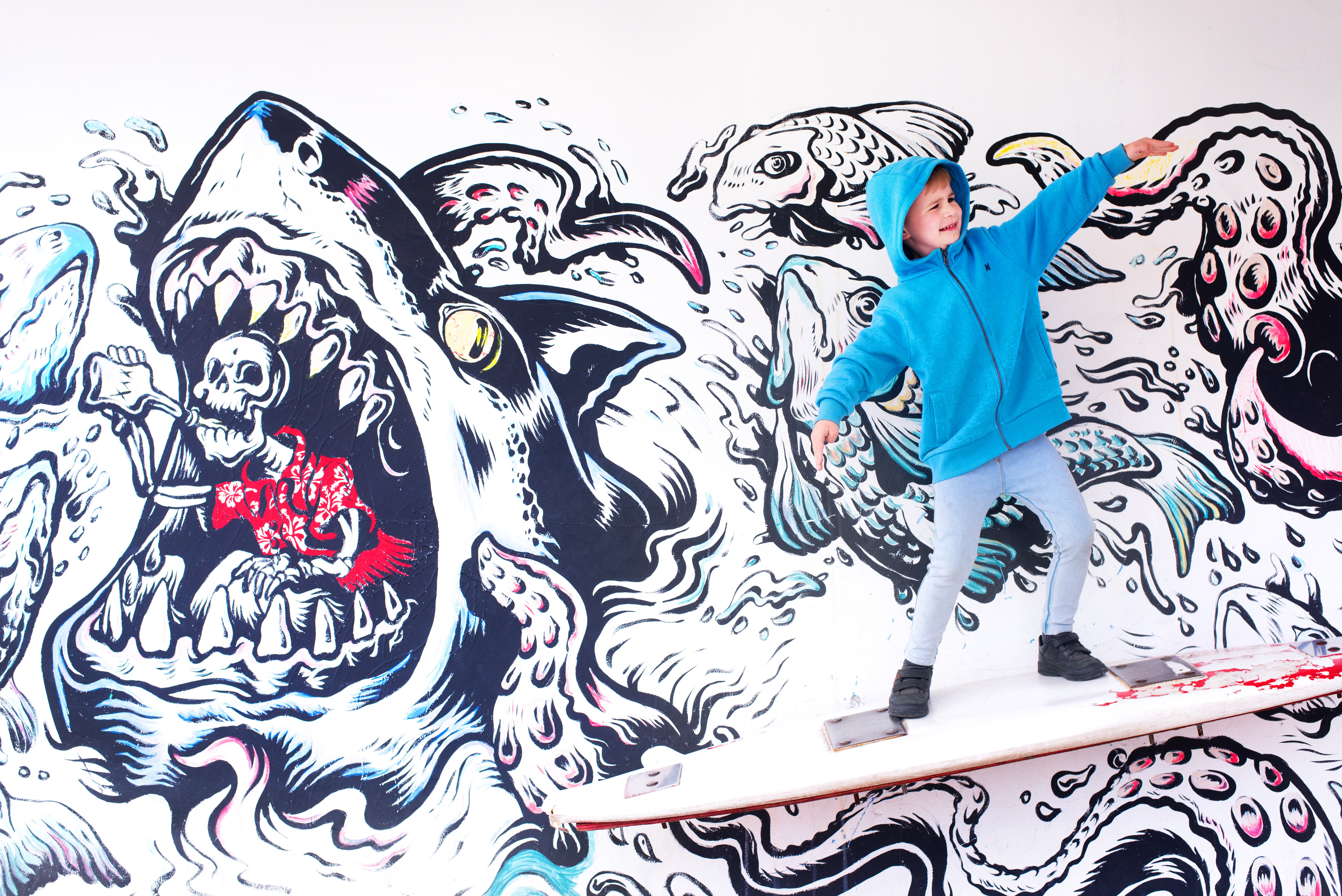 I was TERRIFIED of mine getting it.  Not because I was worried about the disease per se – it was more the grossness of it all.  The thought of my beautiful little boys being covered with watery blisters and scarring themselves like my sister and I did [my sister more than me, as she decided to pick some of hers off, just to see if Mom was telling the truth about scarring or just trying to ruin her fun with picking at them] was horrifying.  I remembered my sister’s children having it and honestly, I just wanted to gag every time I saw them with the spots all over them.

However, it turns out that maternal love conquers all and my spotty little boys were still adorable and Hero’s little nose scar we refer to as a chicken-war battle scar.

For those of you who have children and haven’t experienced Chickenpox yet, I’m sure you know the symptoms already.  Cranky child, tired, lousy appetite and then spots on the torso.  This meant that every time one of the boys was overtired, I was checking their back and tummy every hour to see if a blemish could *possibly* be the dreaded yet anticipated pox. 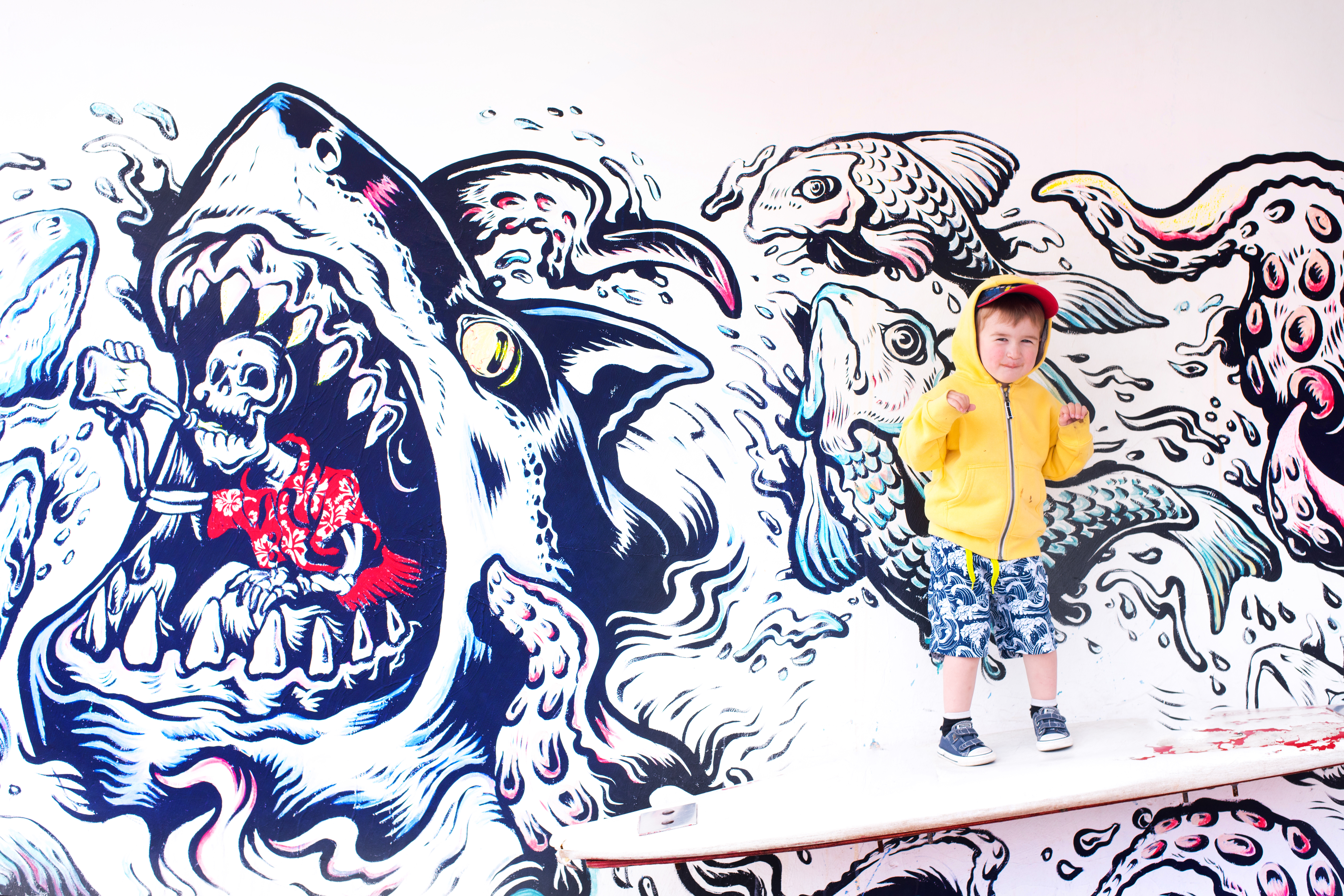 Despite it’s undeniable contagiousness, it took my boys around 5 exposures at school [accidental, I would never, ever put my children at risk of catching a disease purposefully] to finally come down with it.  As soon as the first spot appeared on Lyoto, we were quarantined.  Then Jensen came down with it, and I thought Hero was immune somehow, but a week after the boys’ spots came out, Hero’s appeared within the proper timeframe.  I thought I was never going to see the outside world again by this point.

Anyhow, there are several things that we learned through three bouts of Chickenpox that might help parents of little people who have yet to contract the disease.  Here are our own top ten ways to deal with the misery that can be Chickenpox.

Some of my friends and family add oatmeal to the bath, some don’t.  My boys were all instantly less itchy in the bath and playing also took their minds off the intense need to scratch for a little while.

Cotton is the way to go.  Letting skin breathe and not wearing anything tight made them much happier.  I’ll be honest and say that mine spent most of the time in their pants and snuggled under a sheet occasionally – but then they’d all lie around in their pants everyday if possible.. 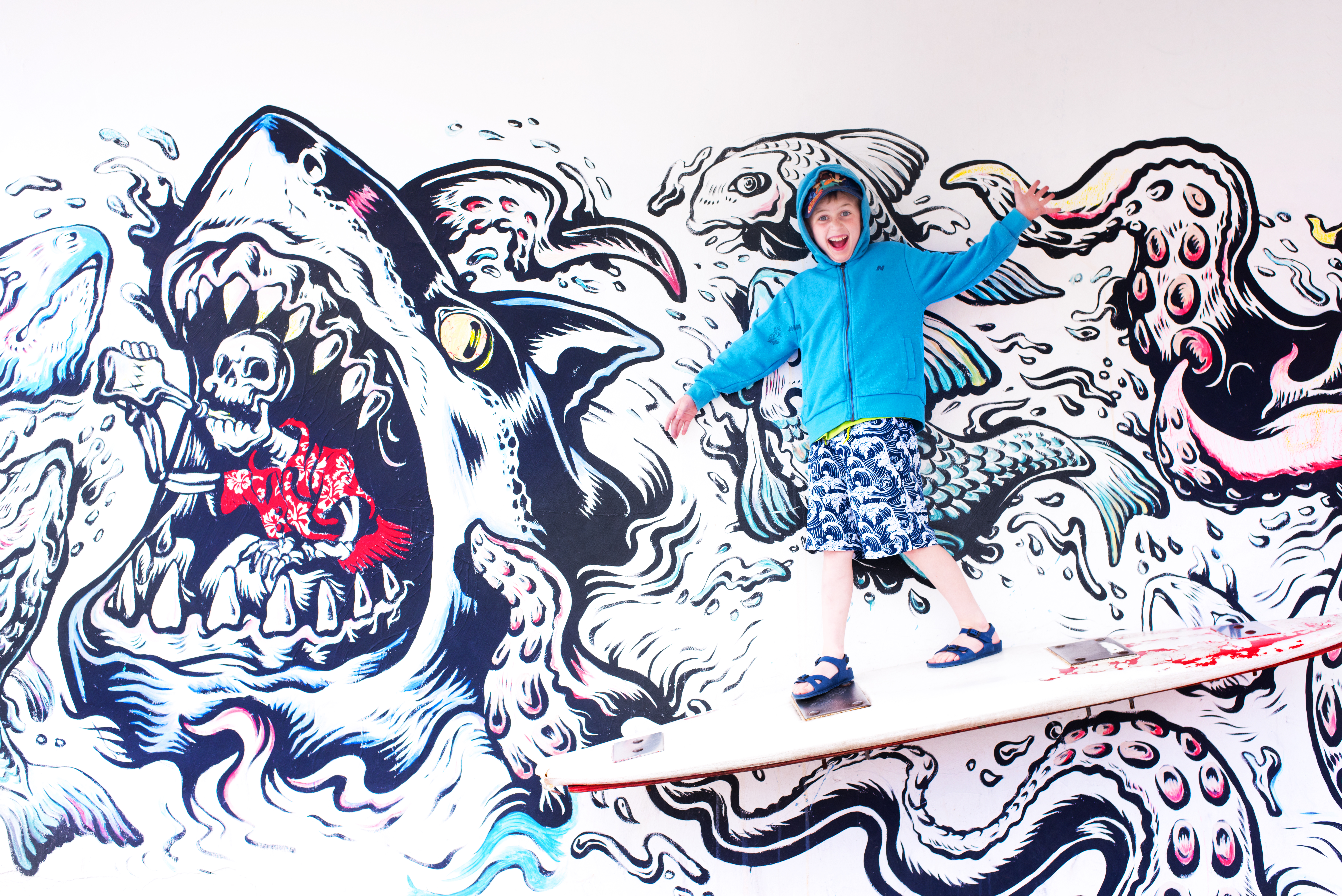 The boys were cranky nearly all the way through their Chickenpox episodes – and they were even more cranky without fluids.

Mittens or Socks for Bed

I could not find any mittens that didn’t annoy the boys at night time and so I sneakily took to waiting until they were asleep and popping cotton socks on their hands.  I used white cotton socks in my size from Primark and they did the trick.  It stops infection if they knock a spot off and get bacteria from their nails into the wounds.

Luckily for us, it wasn’t the middle of Winter when we had Chickenpox [although it was Christmas when I caught it as a child!] and so at night we had the windows open.  This lowered their body temperature which often raises with Chickenpox and let them drift off to sleep faster.

With the temperature increases, the boys complained with achy and hurty legs quite a bit and so at night we sometimes let them have a little infant paracetamol – we used Calpol.  We were advised against ibuprofen with chickenpox.  Always contact your own doctor if you’re concerned about their pain though. 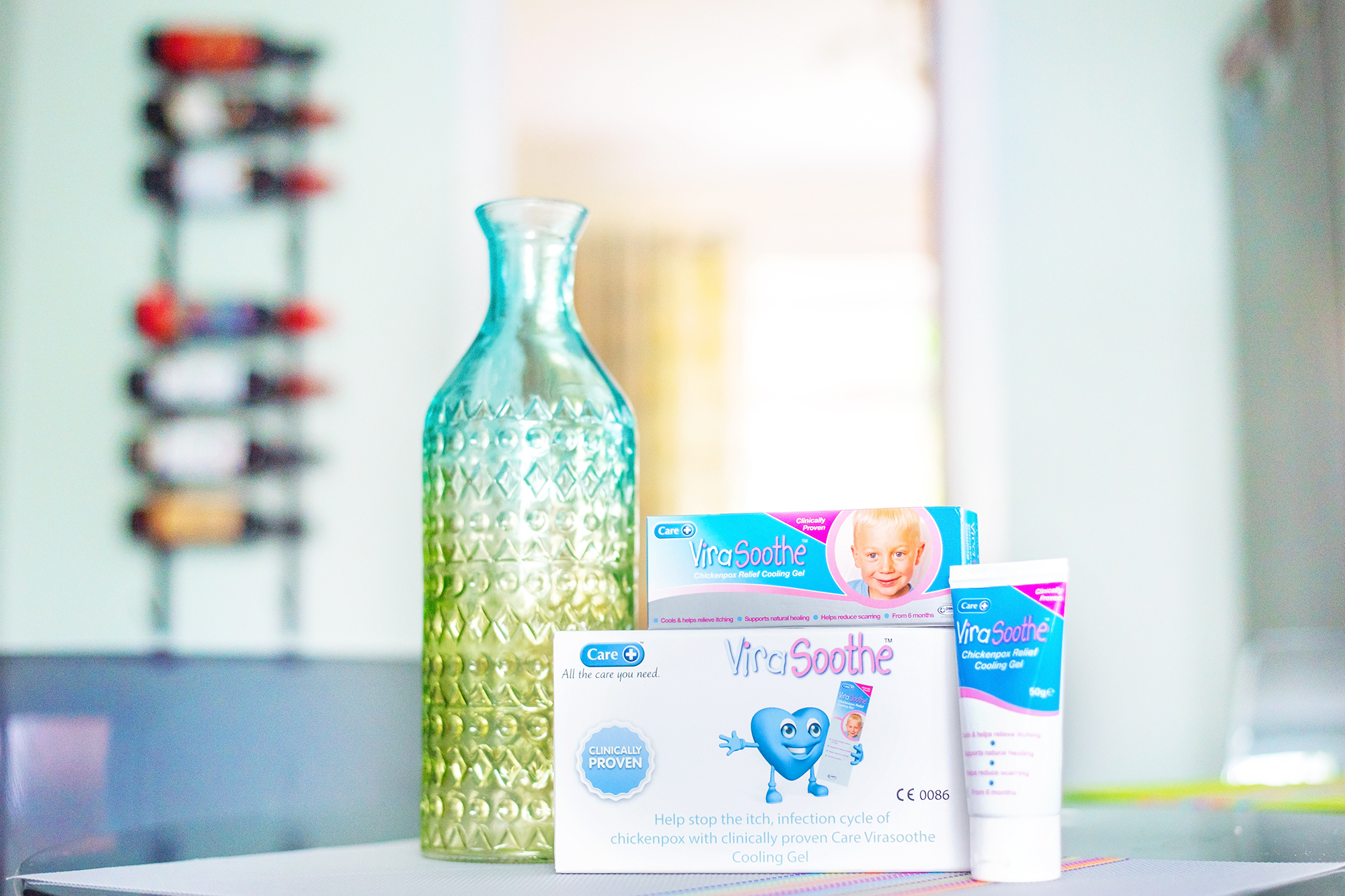 When I was teeny, it was Calamine Lotion but it was soon realised that the lotion whilst soothing at first actually dries the skin and makes it even more itchy.  When it struck our house, we were recommended Care Virasoothe Gel which I hot-footed it to Boots to get.  This was the boys’ favourite because it took the itchiness down so much, and gave them a cool, tingly feeling [I read the science behind this, it’s very clever].  There’s also a spray gel and both can be used from 6 months old.  You can use it 2-3 times a day and so we used it when they got up, in the afternoon as they started getting cranky and then just before bedtime to cool them and help them sleep.  We also used it a few other times when they complained of really itchy times.  It was amazing.

Movies, Minecraft, whatever took their mind off it helped.  Luckily, being boys they seem to disappear into the one thing they’re focused on and that was such a blessing.  Being able to have ice creams was also a huge attention grabber.

The spots can get EVERYWHERE.  My boys were so sad when they found out that they could appear on their genitals too, and were horrified about it.  They also get inside their mouths and soft foods like ice creams were brilliant.  It’s not forever and to be honest, it stopped them complaining.  Avoid salty and acidic foods as they make the blisters hurt too.

Get the Camera Out

Yes, take a photo.  My boys LOVE looking at themselves with Chickenpox and remembering how itchy they were!  Odd, I know – but it made them happy, pulling sad and happy faces to see which they liked best!

This post is sponsored by Care, and their fantastic ViraSoothe Chickenpox Relief Gel is available at supermarkets and Boots stores nationwide, retailing at £5.73 for 50g and £8.43 for 75g for the Gel. The Spray Gel is £8.43 for 75g.  We were compensated for our tips and honesty on the subject of Chickenpox and were invited to do so following our experience with Virasoothe Gel.

THE JOKER OF THE JONES PACK #FEEDTHEIRPLAYFULNATURE

NO SLEEP ‘TIL BEDTIME: SUZY SNOOZE BY BLEEPBLEEPS

Summer Blog Challenge: Day #14: 15 Tips To Get Through Life…
« BETTER TOOTHBRUSHING FOR LONGER? NO LONGER AN ISSUE WITH PLAYBRUSH
INCREDIBLE SUMMER ON THE DISNEY CHANNEL »