SUBSCRIBE TO OUR NEWSLETTER FOR SIX SECRETS TO AN EGG-CEPTIONALLY FUN EASTERTIME AT HOME!
You are here: Home / GAMES AND TOYS / PANDEMIC [BLOGGER BOARD GAME CLUB]

This is a review of the board game Pandemic, as part of the Blogger Board Game Club 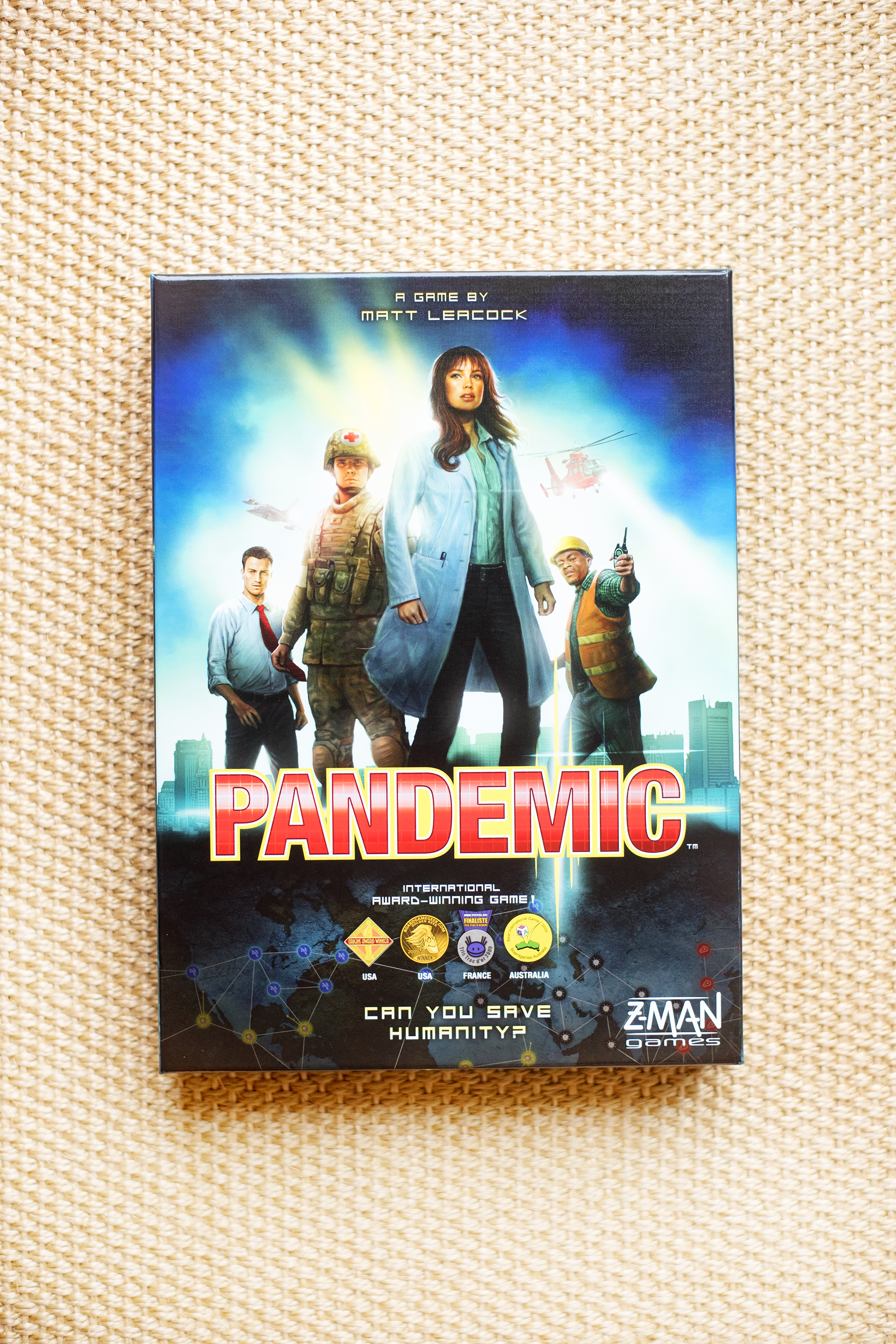 This week on Blogger Board Game Club, Gav and I have been playing one of our very favourite games, Pandemic.  We’ve played a few editions of this one, and it’s brilliant every time.  This is the 2013 edition. 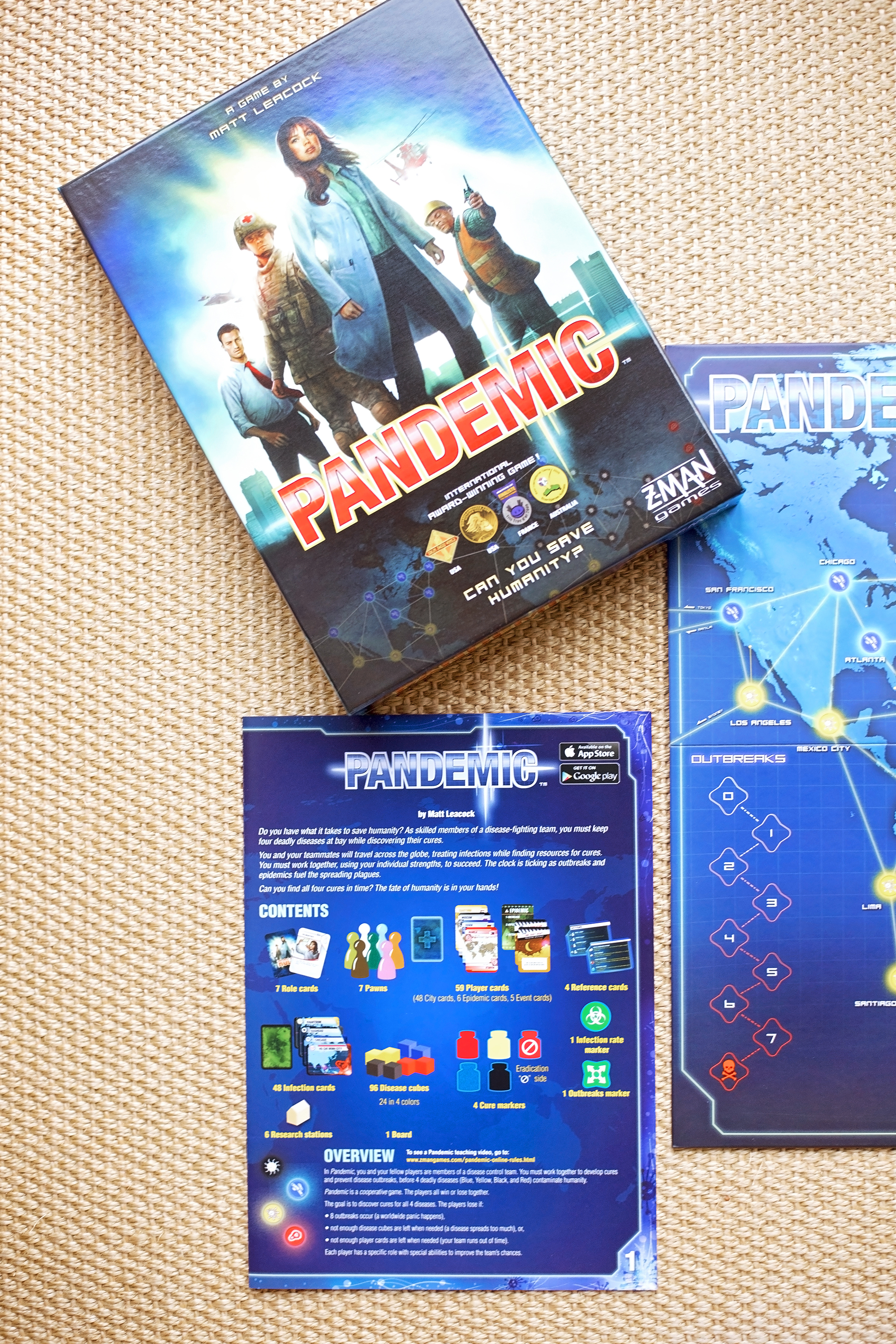 I’ve learned quite a bit about board games this year as Gav and I have decided that instead of staring at the TV screen in the evenings, we’d make an effort to play board games and stay awake.  I’ve always wondered how all of those complicated dice throwing, card wielding games work and fancied myself as a bit of a Dungeons and Dragons player, and so here I am, with about 30 new board games in the house, and I’m actually able to understand them [for the most part].

Pandemic is a co-operative game.  That means that instead of me playing against Gav [which I do love], Gav and I team up to play against the game.  Sounds crazy, right?  I thought so.  I’ve played quite a few co-operative games now though and I get it.  It’s not magic and there’s no fairy who’s competing against us, it’s just a really well-designed game, and this one is by Matt Leacock.

The aim of Pandemic is to cure the world of four contagious diseases.  You’re part of a team of super-skilled disease-fighters, and you need to work together to travel the globe, treating infected areas whilst trying to build hospitals to cure the diseases. With every turn there’s a risk of outbreaks, epidemics and ultimately the World’s downfall. 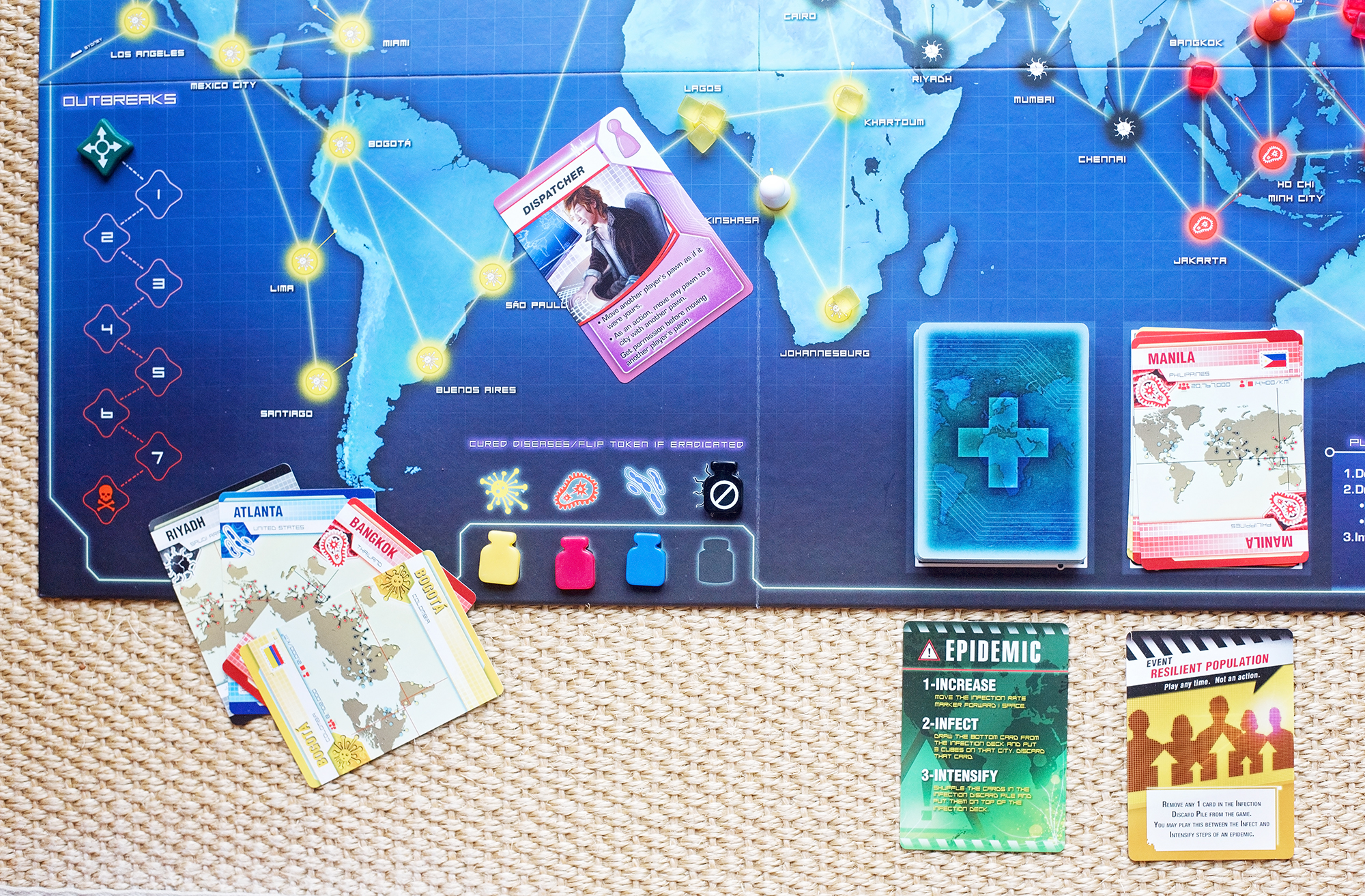 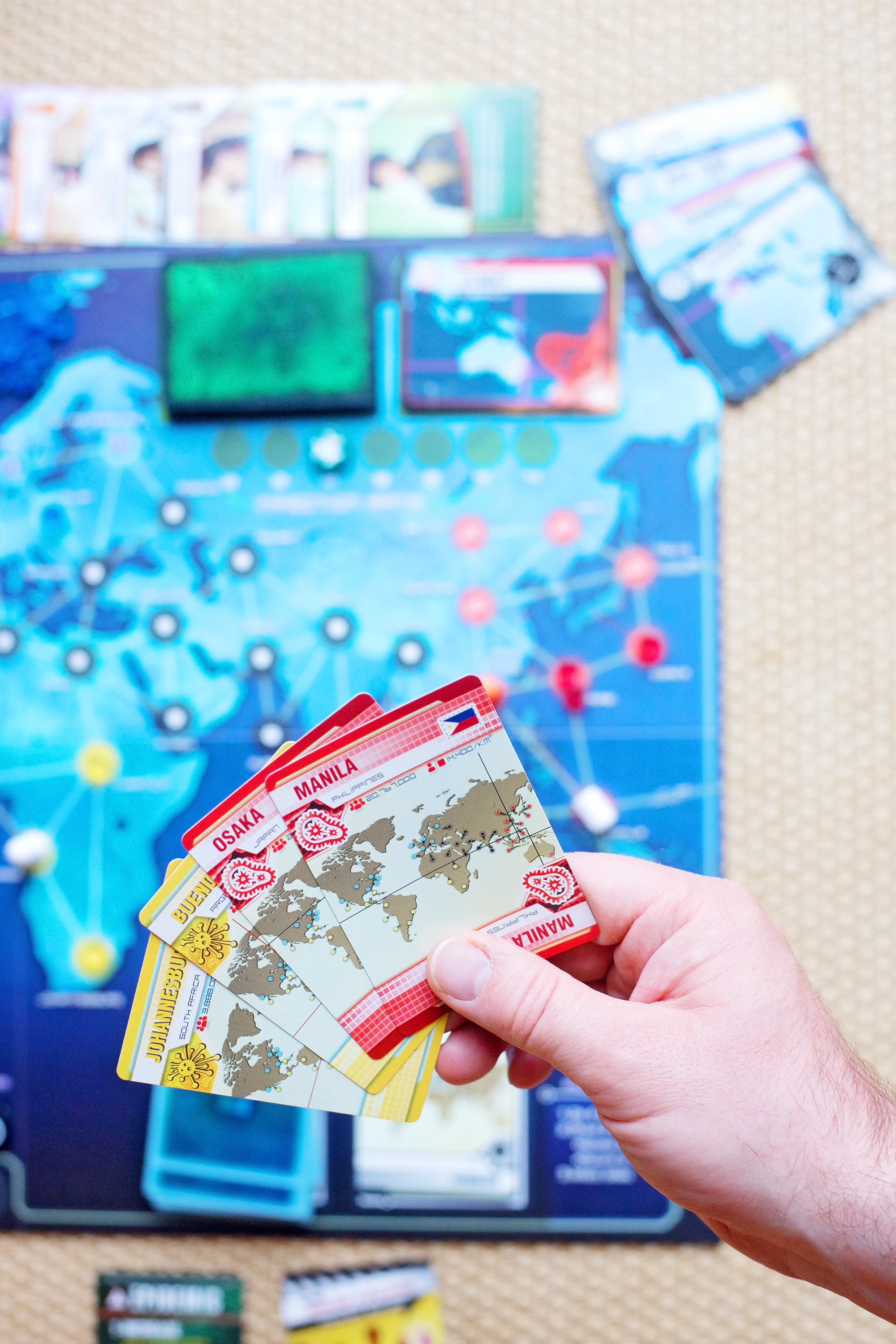 INSIDE THE PANDEMIC BOX

The Pandemic game board is a very impressive map of the Earth. Each player has a special role with a special ability which can help the team, and on each turn, a player can choose to take up to four actions.  The choices are to travel between cities, treat infected areas, discover a cure, or build a research station. 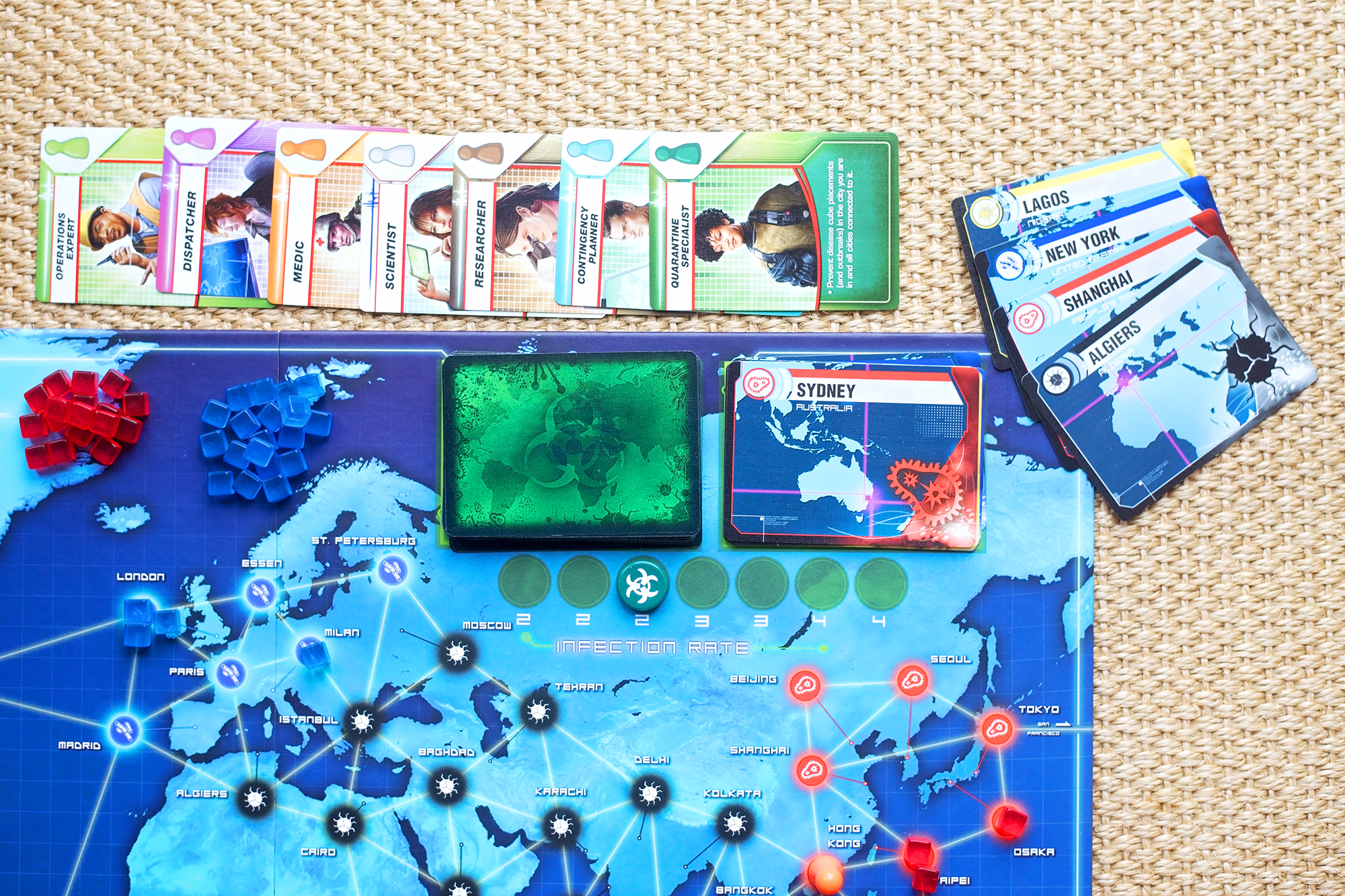 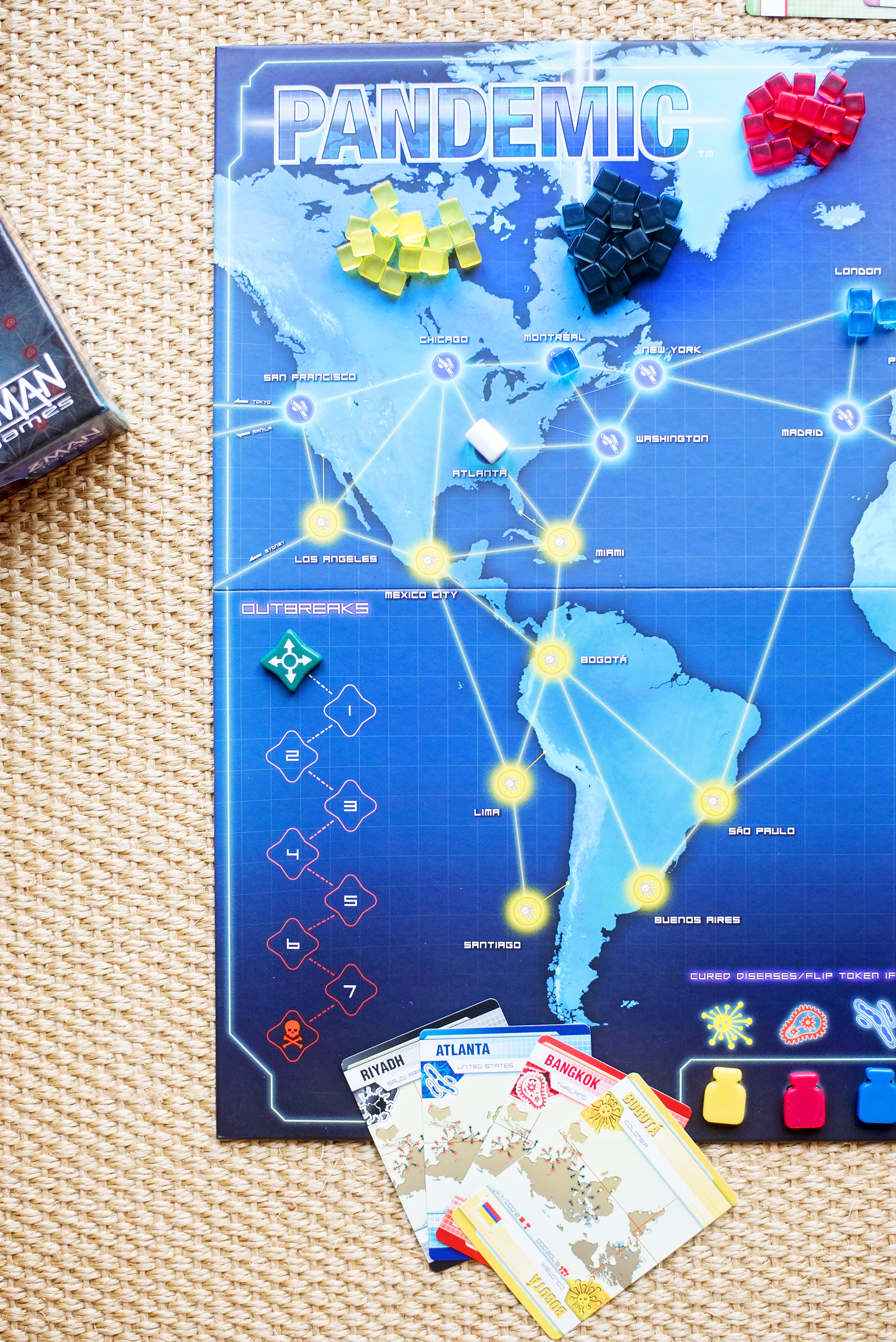 A deck of cards provides the players with the abilities to complete the actions, and mixed in with these are “Epidemic!” cards which then speed up and intensify the rampaging diseases.  It’s hard to explain, but it’s all in the way the cards are dealt out.

To win the game, all four diseases must be cured by building a research laboratory and then collecting enough cards to cure a disease.  If one or more of the diseases spread too far through an outbreak, the disease cubes are exhausted, or the cards [time] run out, it’s all over and the earth is doomed. 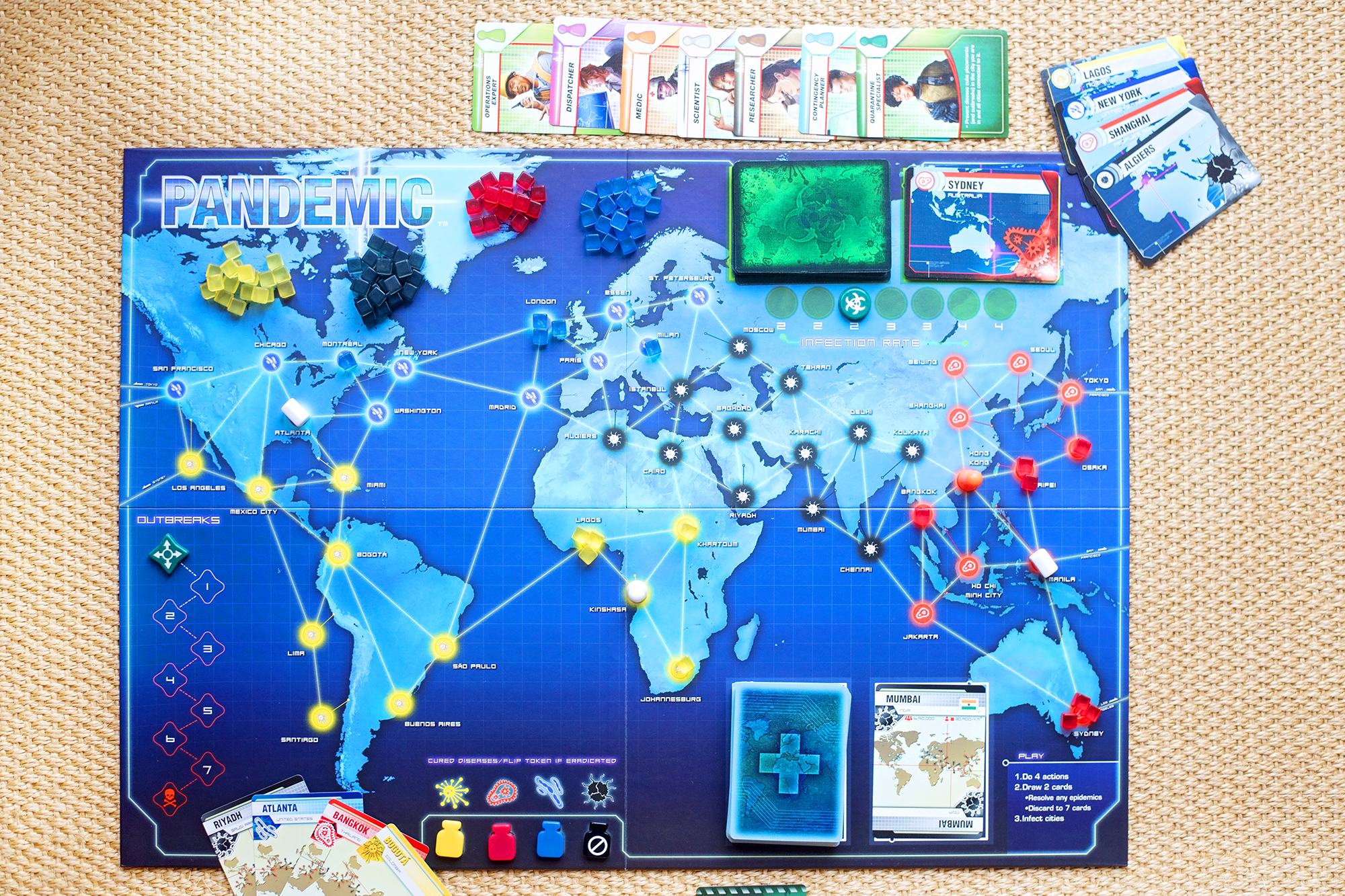 Once you’ve succeeded in saving the world, you might think it’s all over – but you can increase the difficulty in succeeding by increasing the number of Epidemic cards you mix into the deck.  It’s SUCH a great game.  We played ours three times over a weekend when we got it, and it’s just brilliant.  Well worth staying awake for if you’re like us and the only time you can play is around 10pm onwards…!

The Pandemic set up, in all its glory… 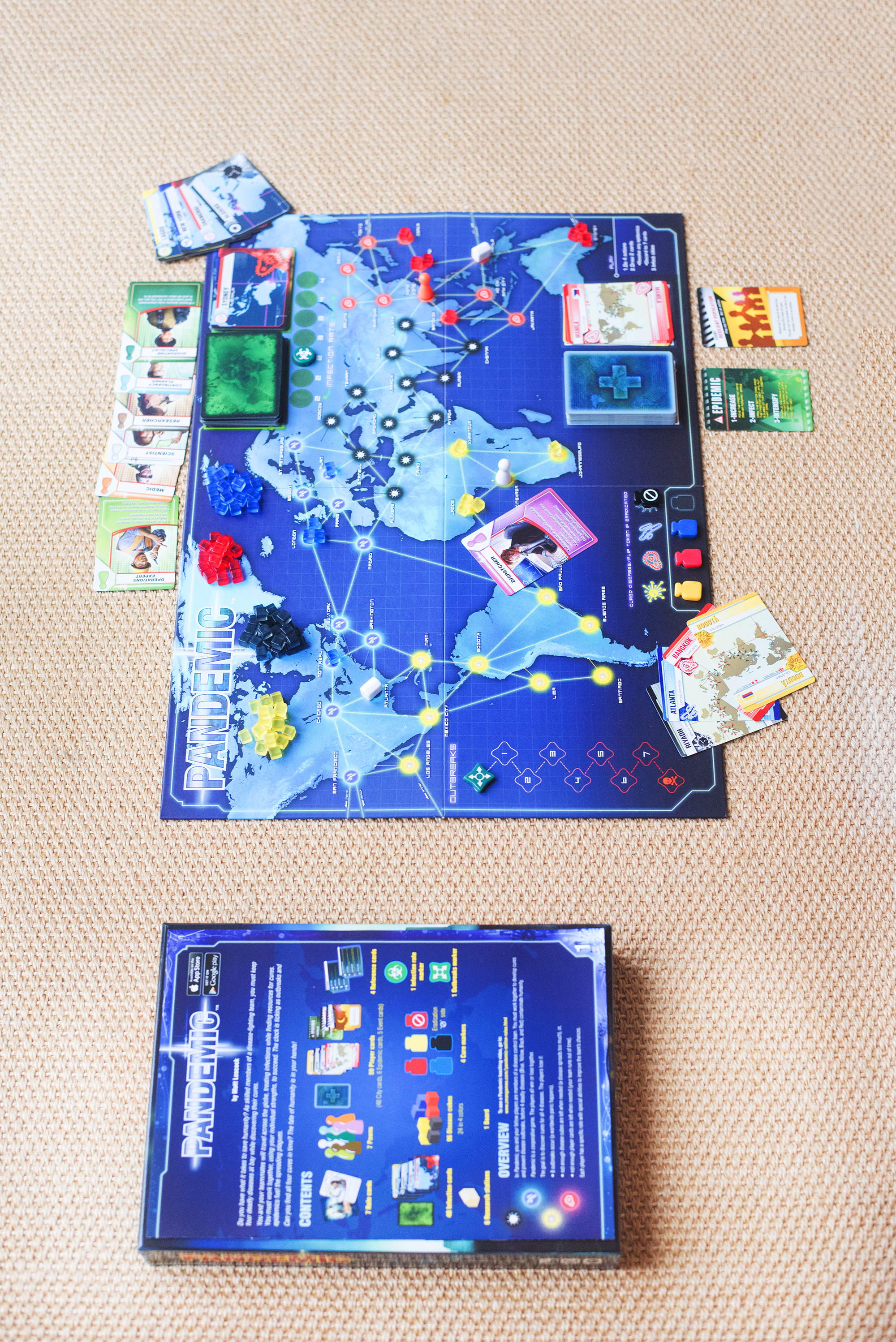