27 days and we are on our way to the French House of Mouse, and as if that wasn’t exciting enough, the very lovely press team at Cath Kidston asked if they could send us some of their new Alice in Wonderland collection for our trip!  If you know me [and my mom], you KNOW how much we love our Cath Kidston, er, everything.  My bathroom is full of their towels, my closet is full of their bags and my bed is covered with their linen.  I ADORE everything they make.  When they started making Disney themed collections, I was blown away.  Then the Cath Kidston Disney Alice in Wonderland collection was announced.  My heart burst.

So, there I was, thinking I was about to receive a little gift from them, but when two boxes arrived with my postman [he just LOVES me for helping him get beach body ready] I was completely blown away – so much that I cried a little [a lot].

We haven’t told the boys yet that we’re going to Disneyland Paris for Hero’s first birthday and so they don’t understand why I won’t let them wear their Cheshire Cat t-shirts with the lenticular [boggly] eyes, or take their new Alice in Wonderland bags out for trips.  They honestly just think I’m hoarding it.

The collection is released Thursday [tomorrow] at 7pm, but in the meantime, here are the beautiful pieces we have, and who’s going to be enjoying them…there’s actually something for EVERYONE in our family here. 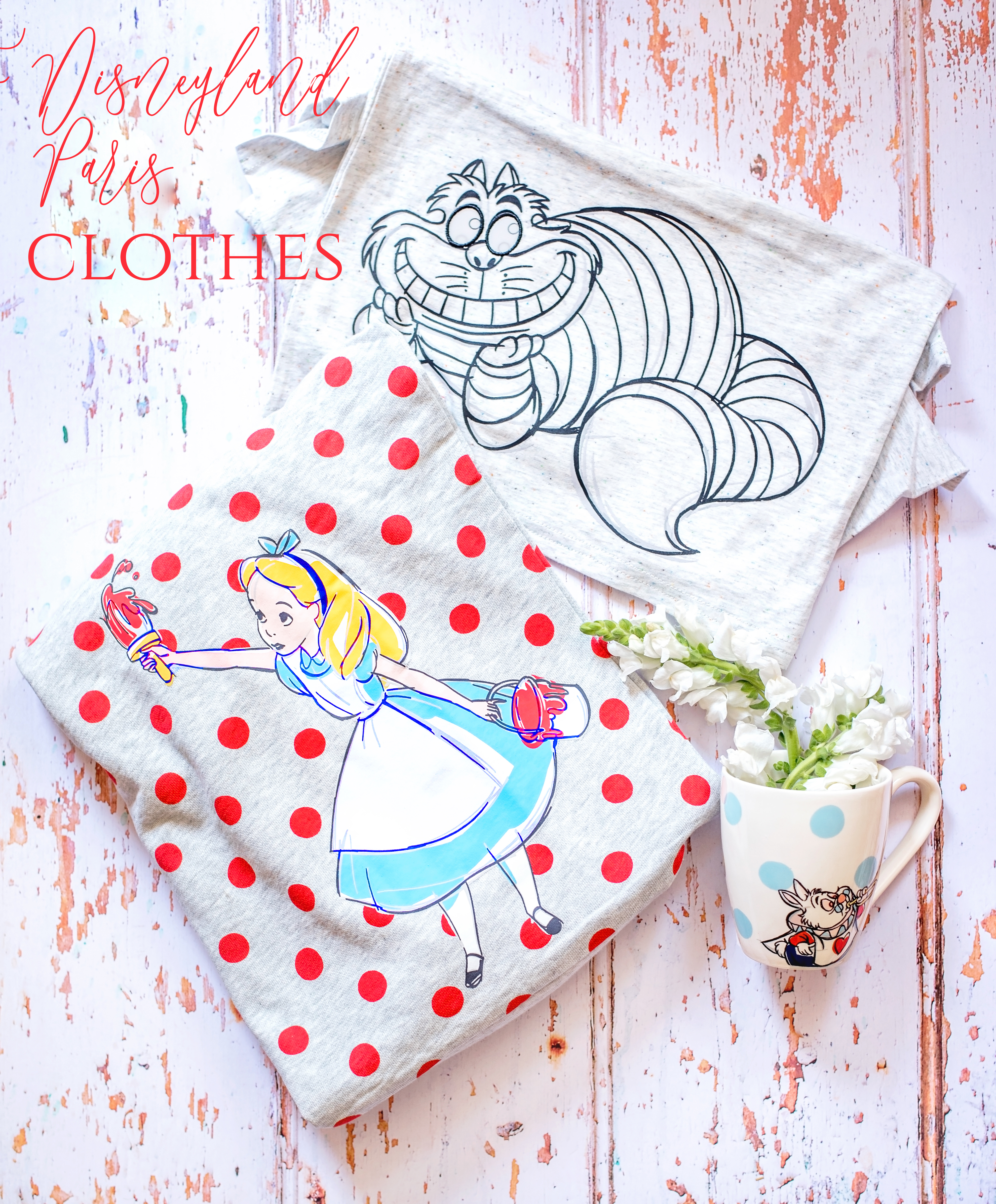 Sorry Gav, you’re out of the game here.  No clothes for Dads.  Me, however, I have been gifted the BEST Alice in Wonderland sweater, ever.  It’s going to be my traveling buddy over to Dover and across to Calais.  It’s soft, lightweight and beautiful.  I have a real thing for grey sweaters and this is by far the cutest I have ever seen, ever.  It’s called the Painting the Roses Red Jumper and it’s £55.  The boys were sent Novelty Cheshire Cat t-shirts and they have lenticular eyes, SO CUTE!  Those are £18 each and they will be blown away by them. 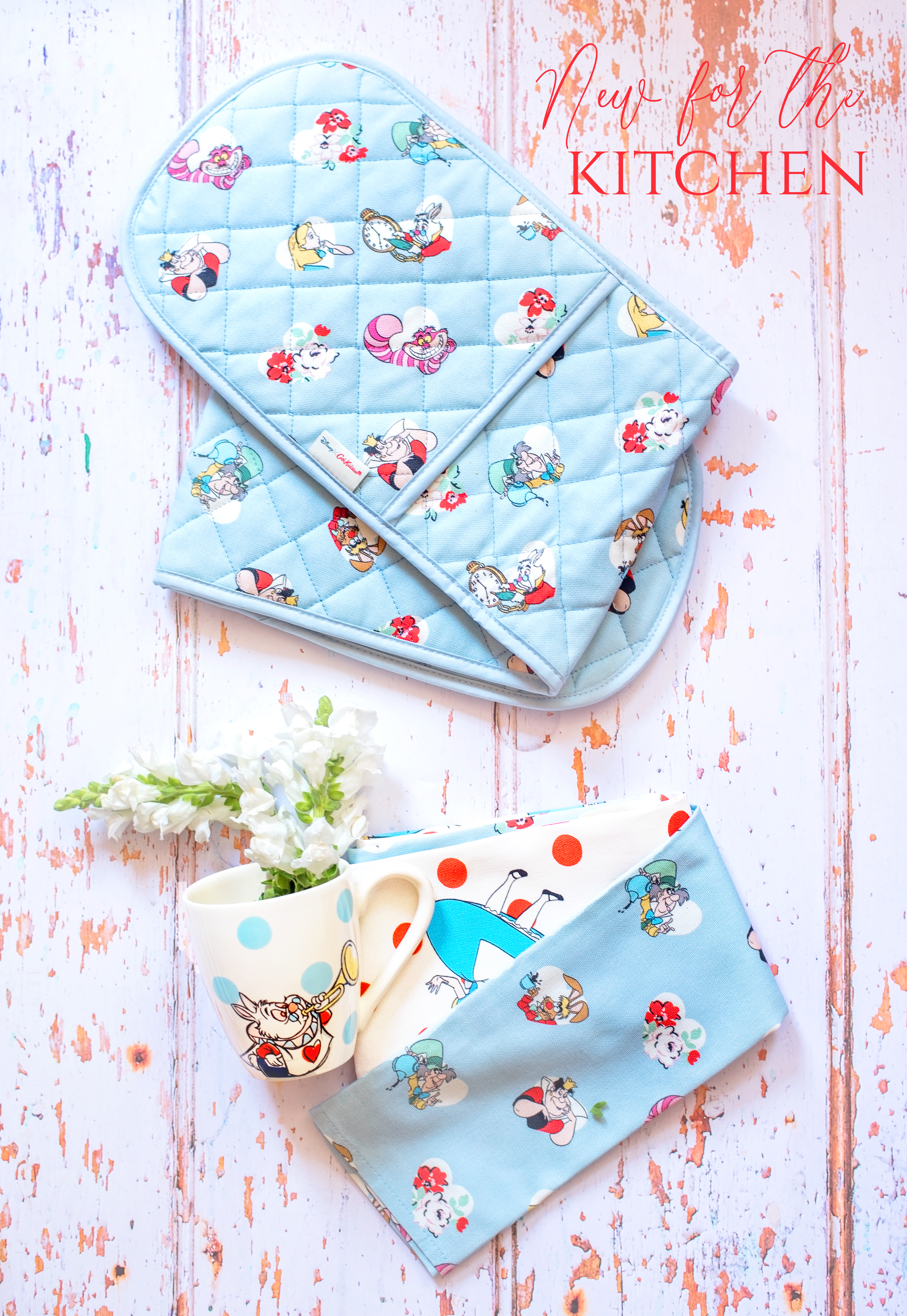 Okay, Gav can *probably* claim those oven gloves as his own as he does most of the cooking and they are just beautiful.  Our old oven gloves are looking pretty icky and I’m caught between wanting to use them and wanting to save them just to make my kitchen look pretty.  They will be £16 and the beautiful Falling Alice Tea Towels in the photograph are £15.  I especially love these because I’m a closet Disney tea towel collector.

The White Rabbit [my favourite character next to Alice] cup is now my preschool run mug and joins my Alice in Wonderland tea set from Disney World.  It suits me perfectly because I am generally running late whenever I make a cup of tea.  The cups are in a variety of designs and are £10 which is a brilliant price for such a fantastic mug! 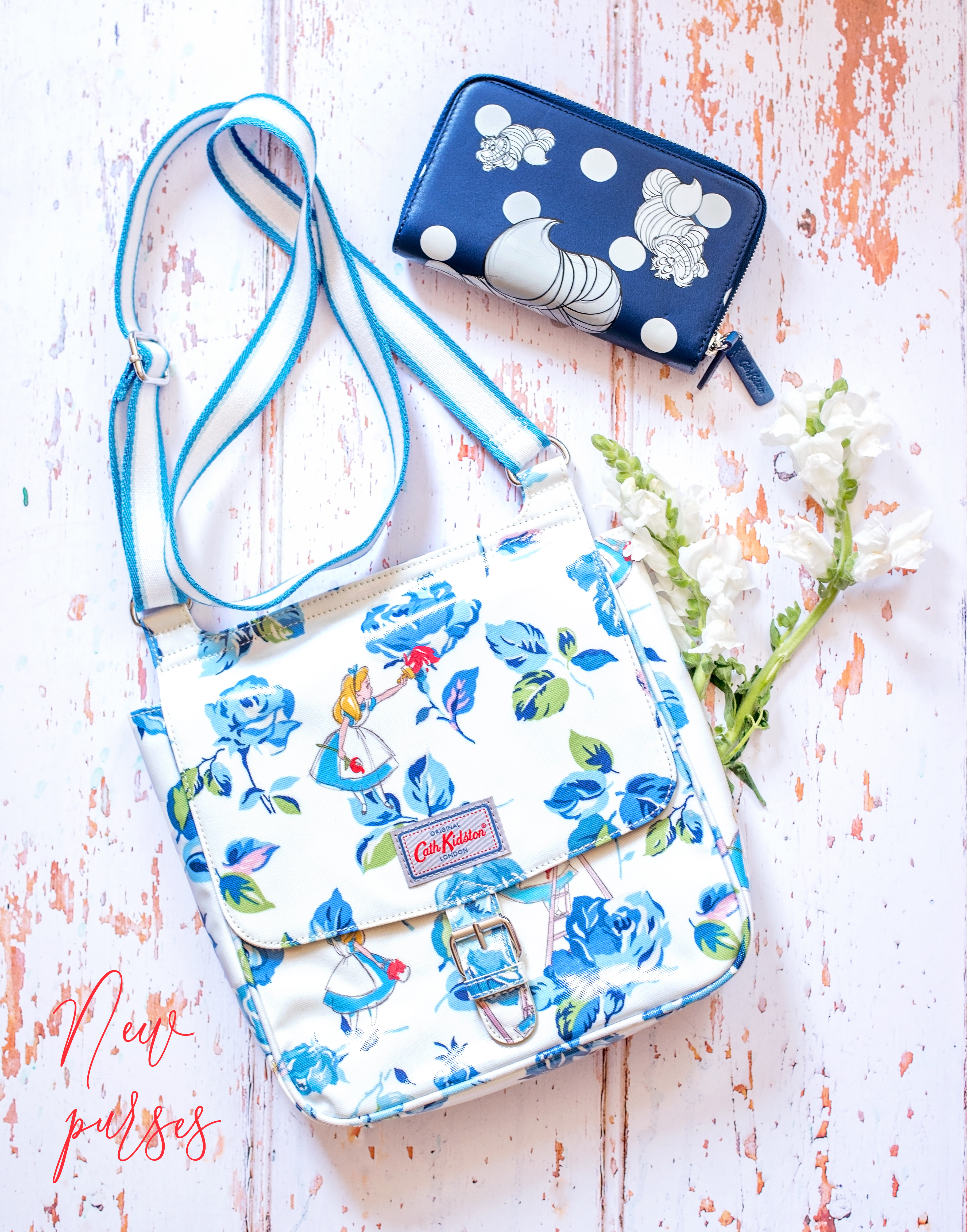 My heart actually skipped a beat when I saw the leather Disappearing Cheshire Cat wallet (£65) and the Painting the Roses Red Alice Tab Saddle Bag [£45].  These pieces stole my heart completely and I’m so delighted to have these. My old wallet is ready to retire and I feel like I have a grown up Disney wallet now.  It stores EVERYTHING.  Fingers crossed this means I won’t lose any cards/cash/coupons ever again.  The bag is going to be with me constantly as it fits my [new] wallet, keys and phone with room to spare!  The only thing I need to do is keep the boys mitts off it, which shouldn’t be too hard, because….

The lovely Cath Kidston people sent my boys a BAG EACH!  They’ve already claimed them – or, rather, Hero told them how they were being distributed.  Lyoto is easy going and he has the Tweedle Dee and Tweedle Dumb rucksack [£30] which is such soft material that he loved it instantly and wanted to fill it with a million Tsum-Tsums; Hero chose the smallest Late for Tea rucksack which is adorable on his little back [£22] and Jensen was awarded the biggest Late for Tea rucksack [£36] because as innocent as his sharing out seemed, all Hero wanted was to be like Jensen [awww]. 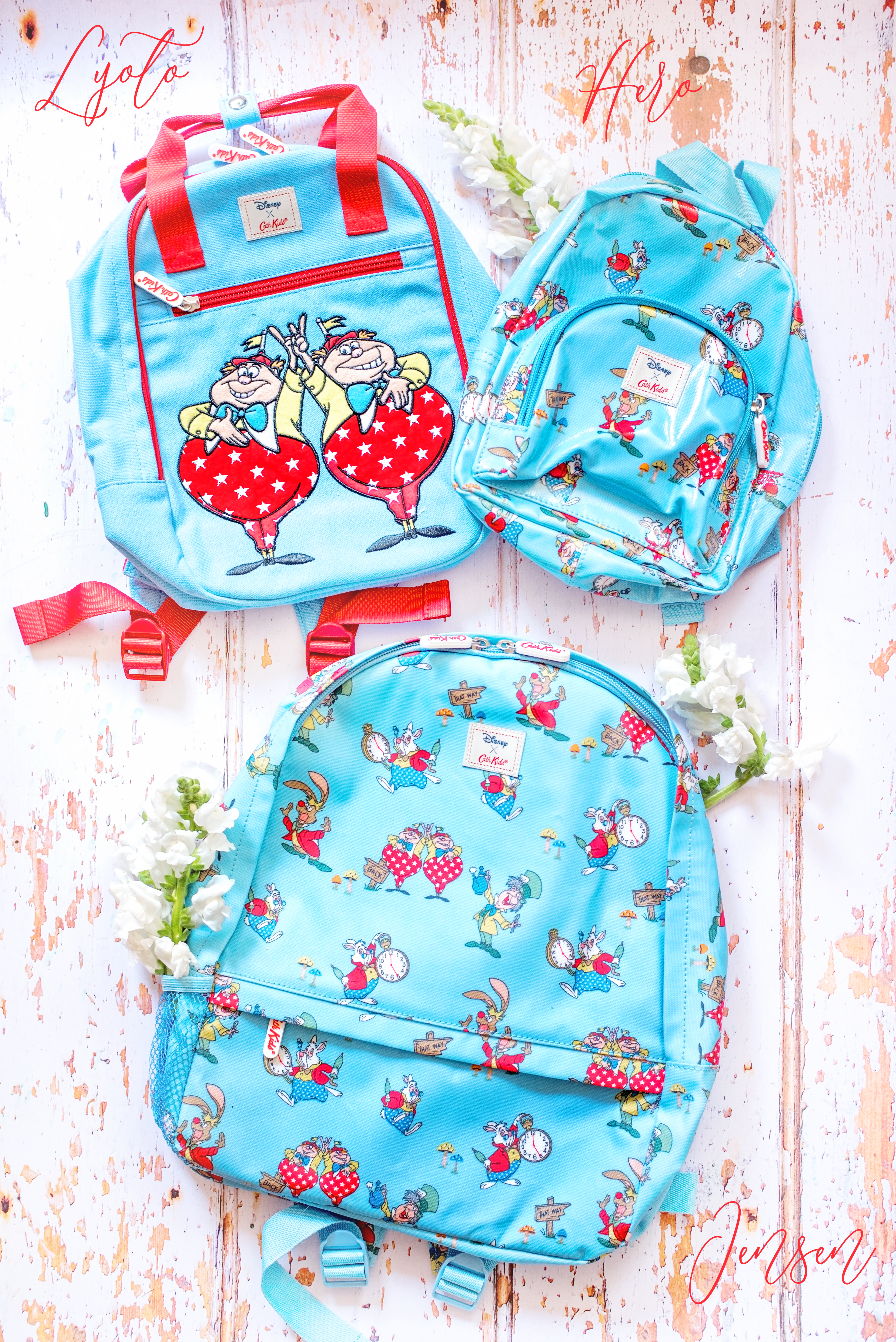 So, it’s with a completely and utterly overwhelmed heart that we say THANK YOU to Cath Kidston for such a lovely and amazing package of their new Cath Kidston Disney Alice in Wonderland collection – we can’t wait to parade them down Main Street and into Alice’s Curious Labryinth!  Hop over to their preview page if you haven’t already, and take a look before the big release tomorrow!