It’s official – it’s an ANNUAL tradition.  I can say this because last Christmas I managed to document and published for all to see, last Year’s Jack Skellington Breakfast.  It can be found by clicking the link back there <—  Soooo, our SECOND annual Jack Skellington breakfast took place on a morning in the Christmas holidays when Gav was too ill to get out of bed and I was feeling so run own but desperate for the boys to have something memorable that we’d done together over the holidays that they loved, other than celebrating Christmas day.

This year, despite my reminding them over and over that they needed to leave Jack and the other NBC Pop Funko toys in my party box ready for the breakfast, they insisted they would play with them and take great care of them….. so naturally Jack was missing when it came to the scrambling of everything together at the last minute to get the breakfast ready.  This year we added our new Disney Store tree ornaments to the table thanks to the wonderful #GiftMagic event I was invited to, and the very lovely people at Viners sent us the shiniest and most Wintery set of charger plates and cutlery to celebrate Christmas with.  The boys were terrifically impressed that they had charger plates to use as apparently, charger plates mean epic mealtimes.

I managed to get the little red, silver and green baubles from Primark in the sale for 50p, the white branches from the flower market and everything else I just shopped our house for [shopped = ransacked].  This year we had an extra special touch to the table with the addition of cookie table place settings from Michelle, our favourite cookie maker EVER.  She’s the lady who made our Moana cookies, Elf cookies and every other cookie I’ve swooned over in the last year.  All of the proceeds from her cookie sales go to Francis House Children’s Hospice and so if you’re after cookies that are just AMAZING in every way, you can find her on Instagram here.  Our cookies this time were so sparkly and written in gold NBC font with little Christmas Town light strings around the outside.  I genuinely didn’t want the boys to eat them.

These photos aren’t in our usual style, but the boys helped edit them and so they’re all tinted bluer than normal like Sally’s face 🙂 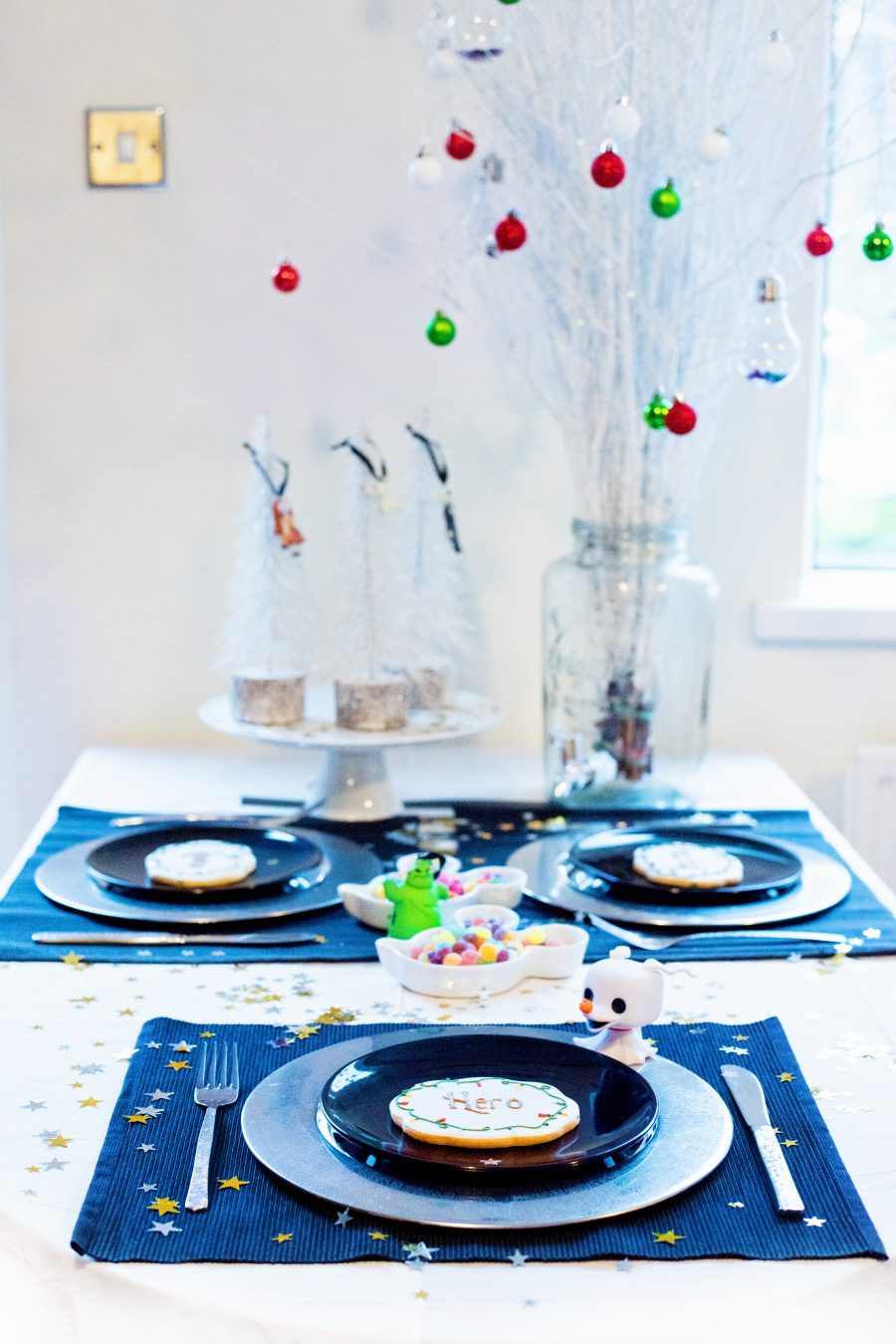 So, with everything for the Jack Skellington Breakfast set up in record time, in a living room that was more like a toy swamp, I headed to the kitchen to whip up the pancakes, bacon and hash browns as requested by the mini-diners.  We added Smarties and tiny marshmallows, Jelly Tots, Twix and Flakes to the toppings bar in our little Mickey Mouse bowls, with Nutella, Golden Syrup and squirty cream on top. 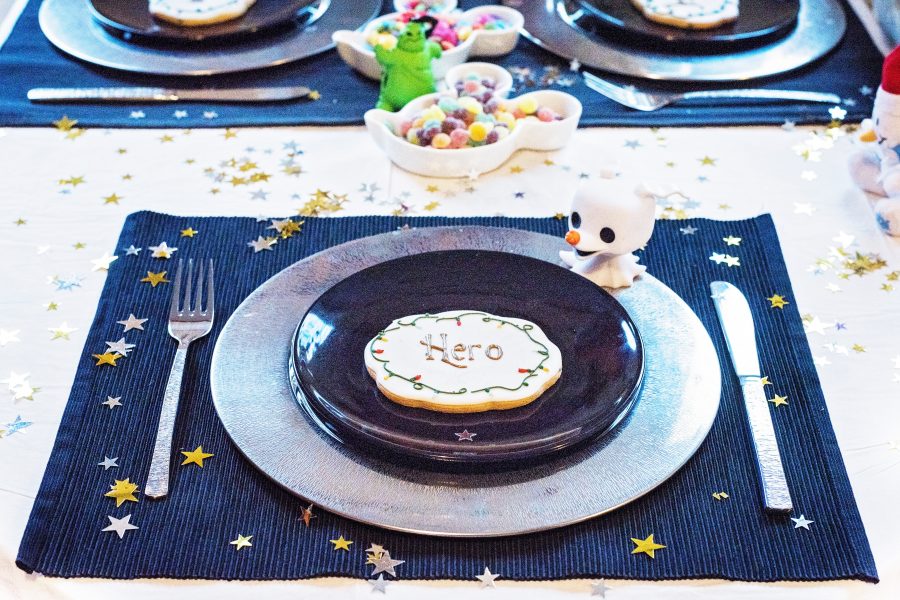 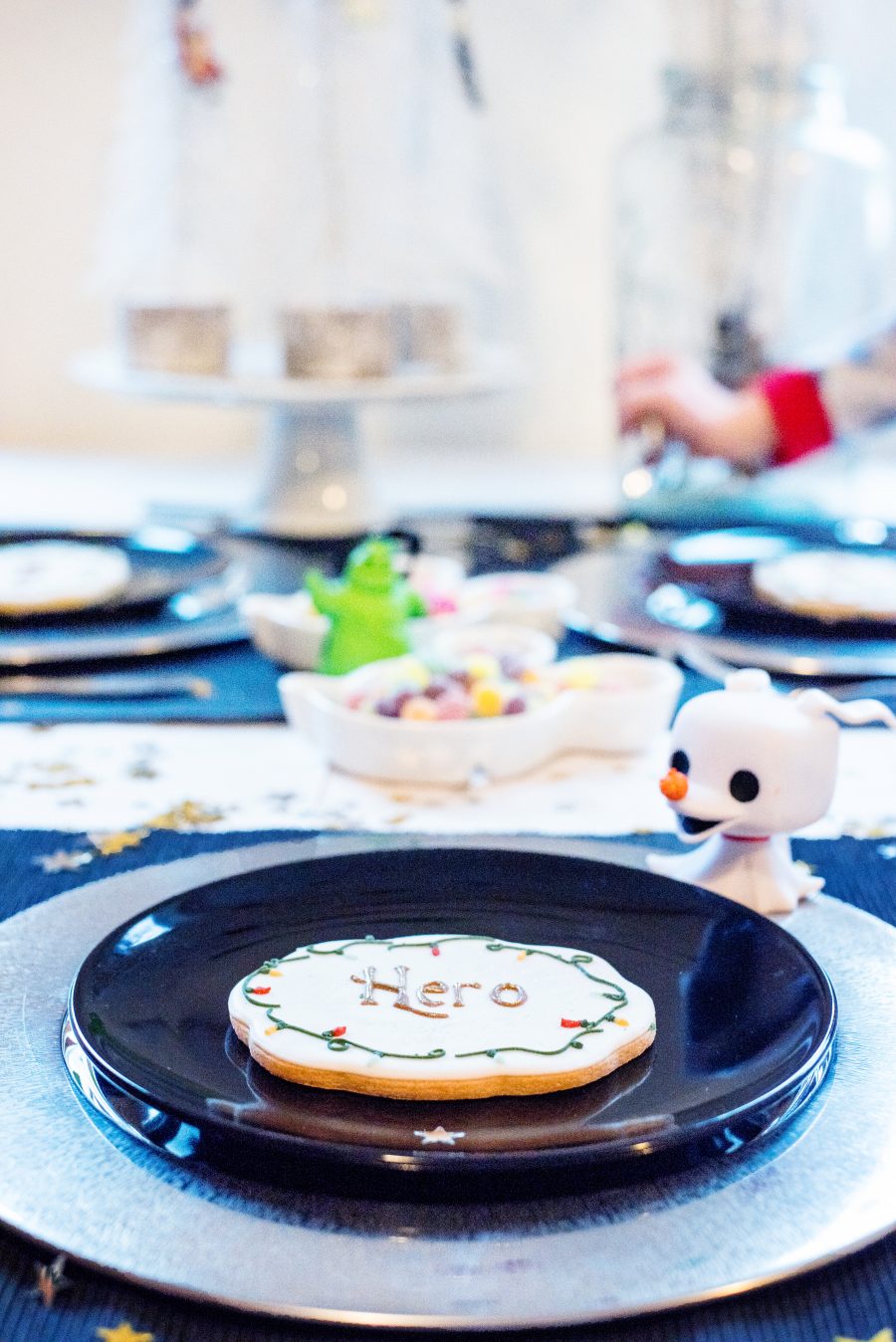 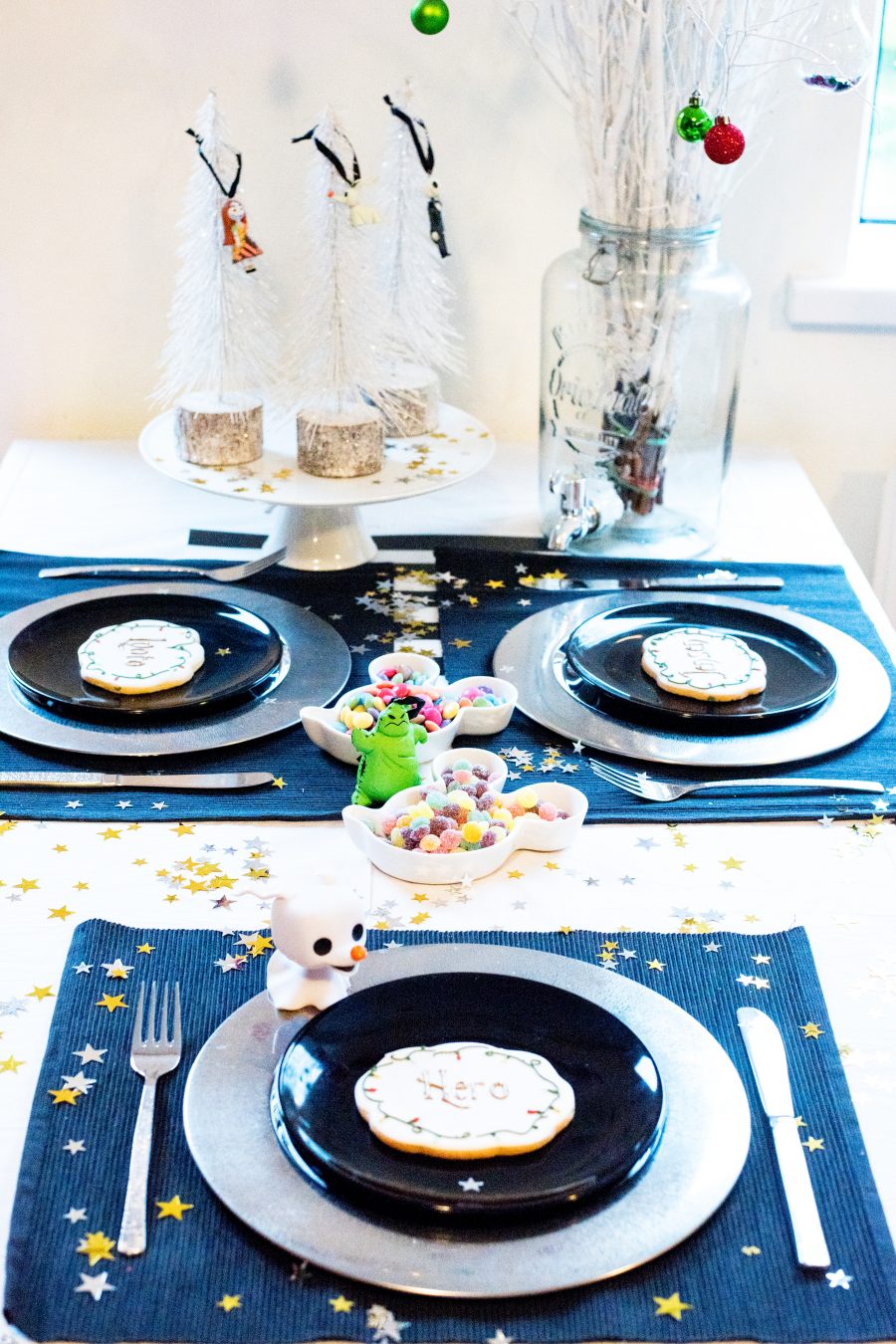 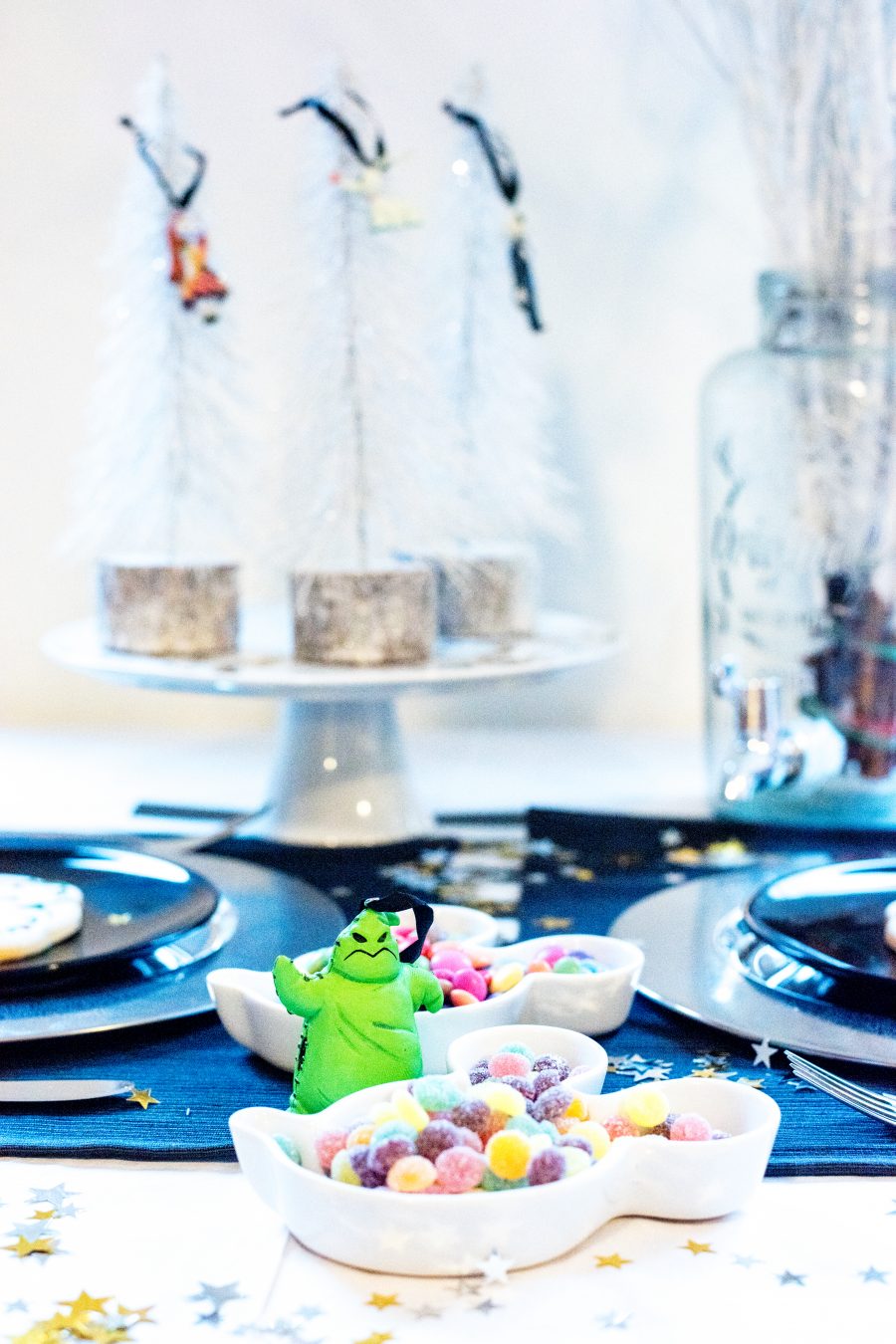 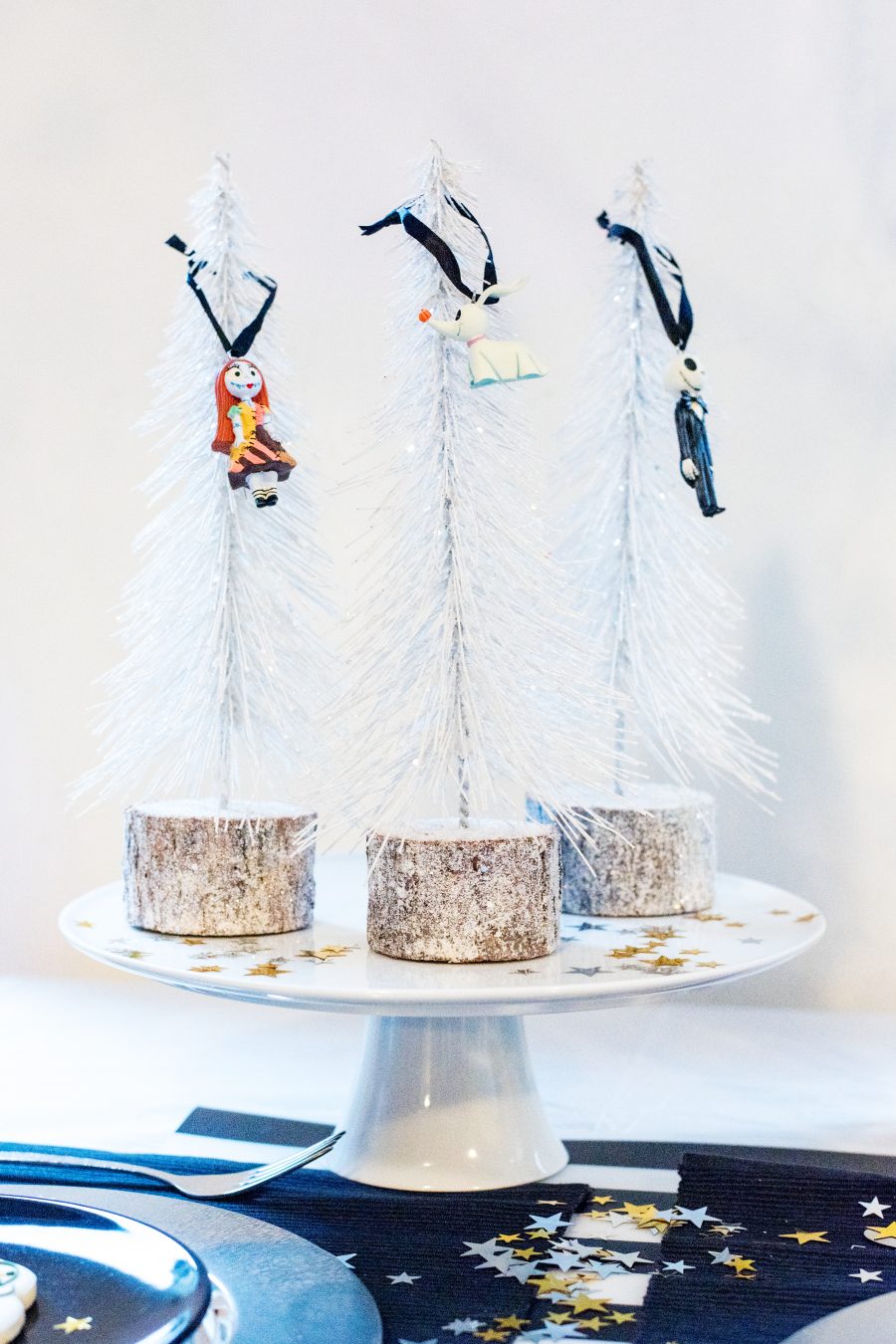 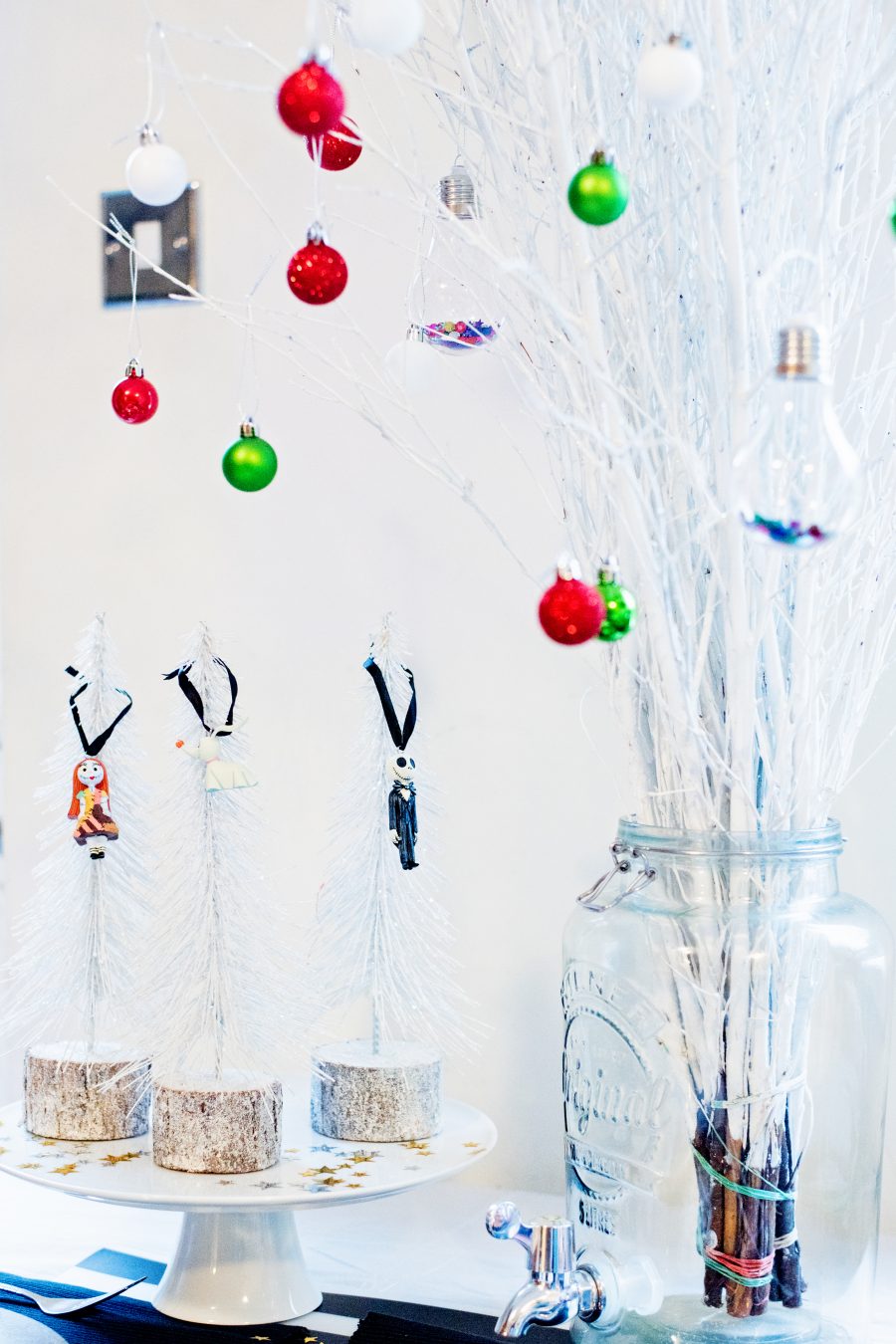 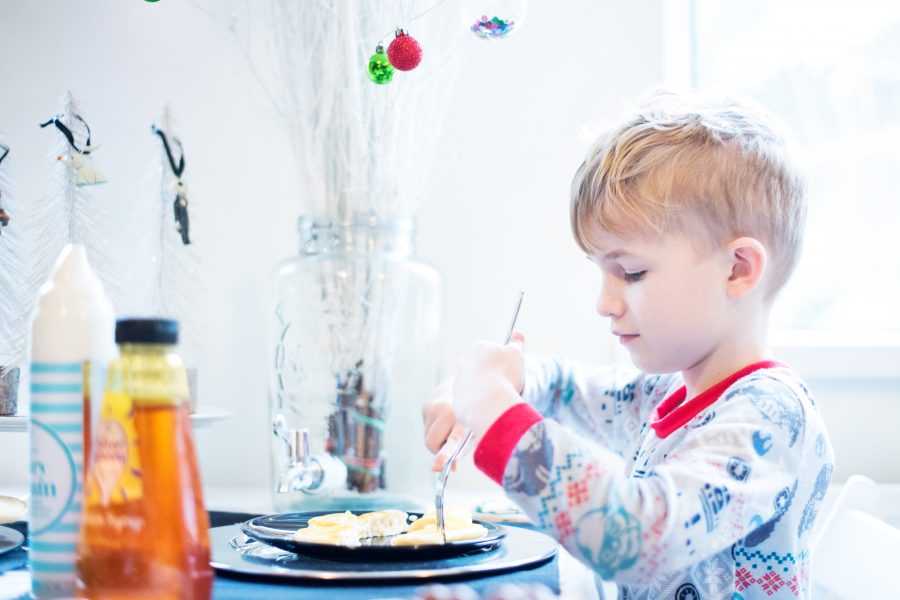 It all started off pretty tame.  Jensen was excited to be eating his pancakes with a giant, grown-up knife and fork and went for the classic golden syrup drench.  Lyoto I knew was going to cover his in cream, chocolate and smarties and then eat two bites and declare he was full…but could he still have some more cream.  Hero, though.  Oh, Hero.  Eurgh. 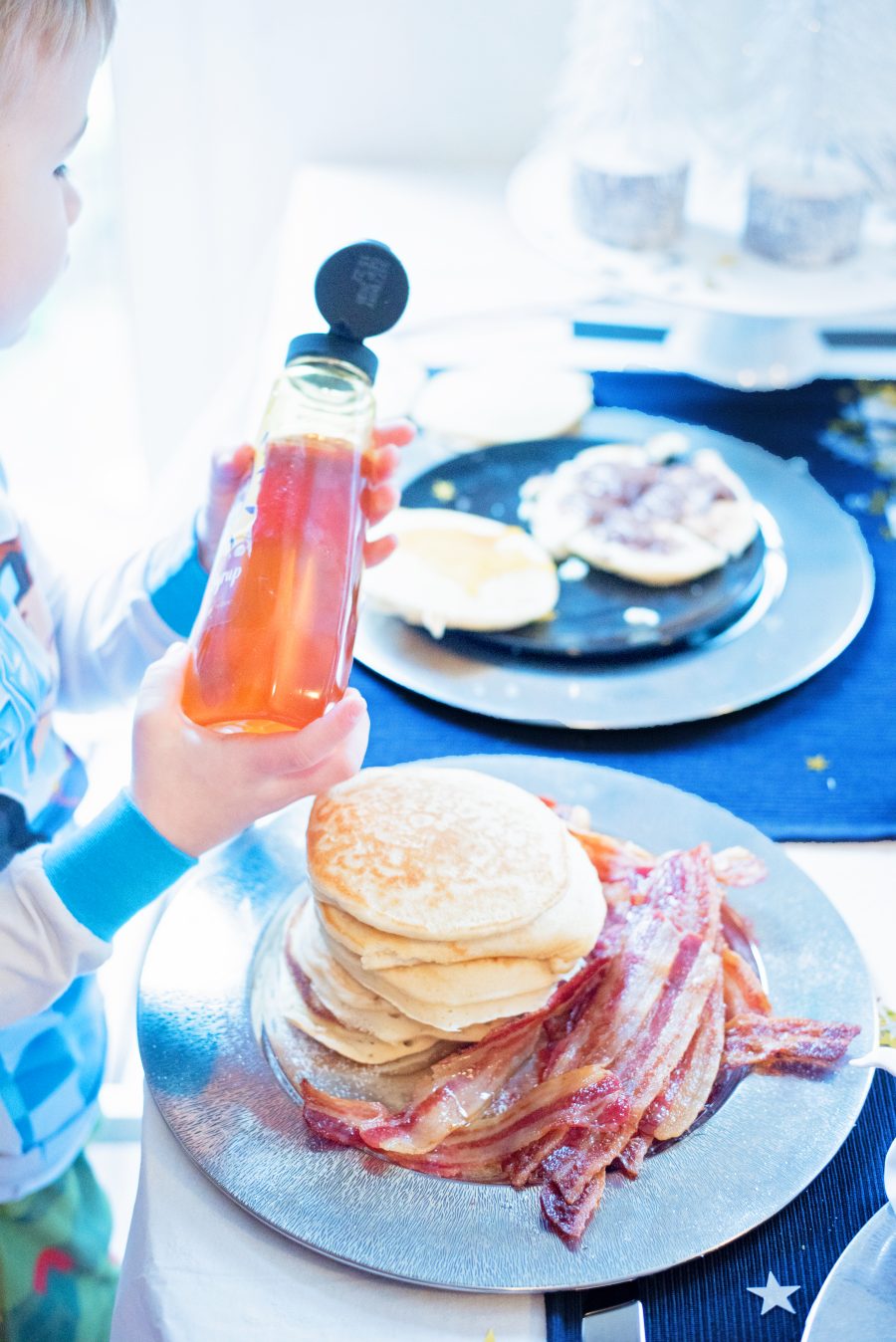 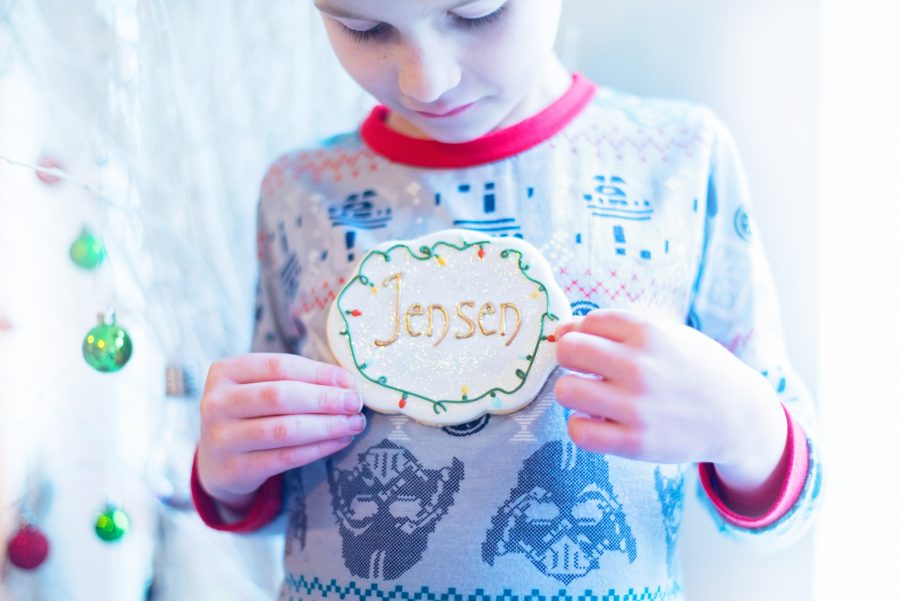 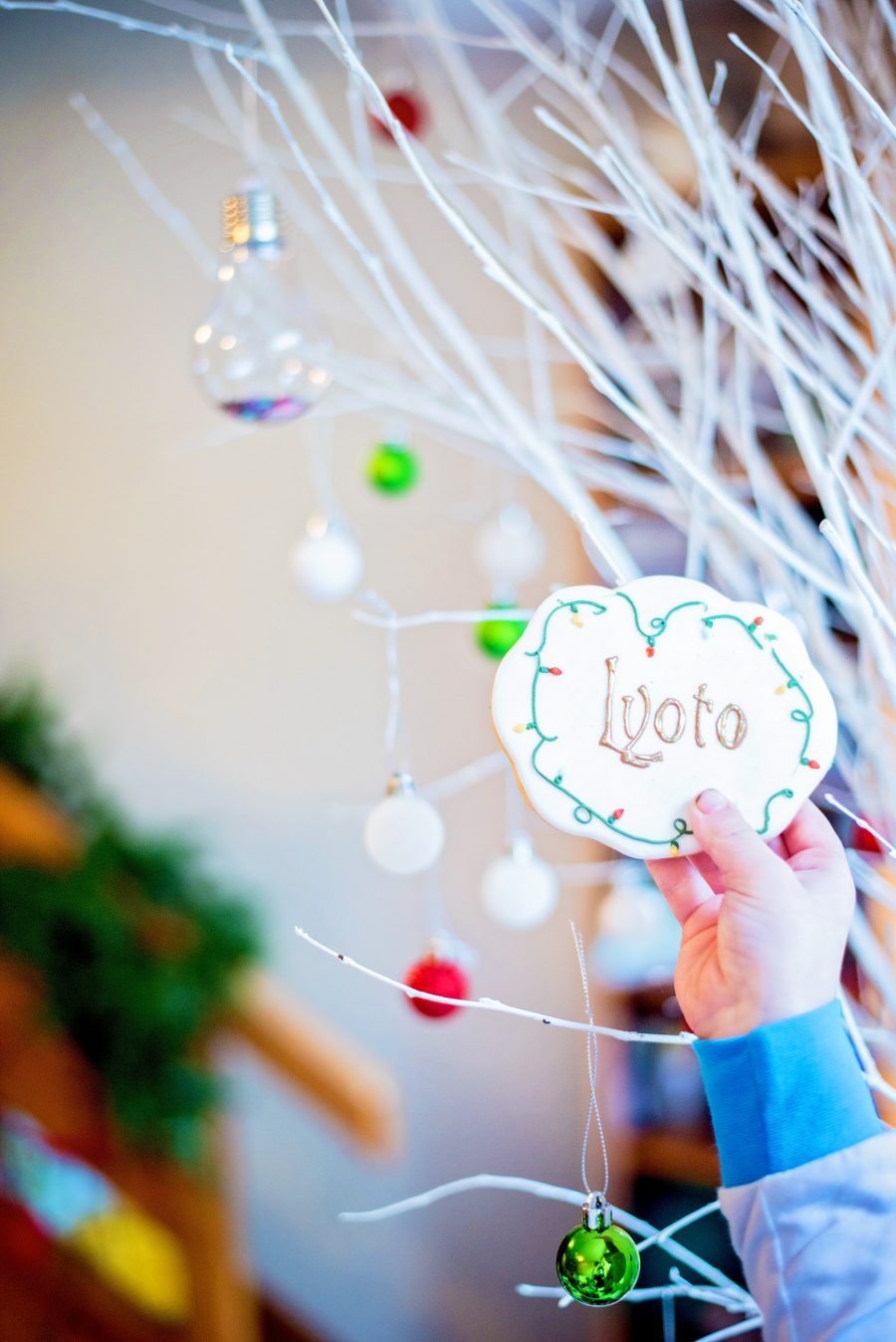 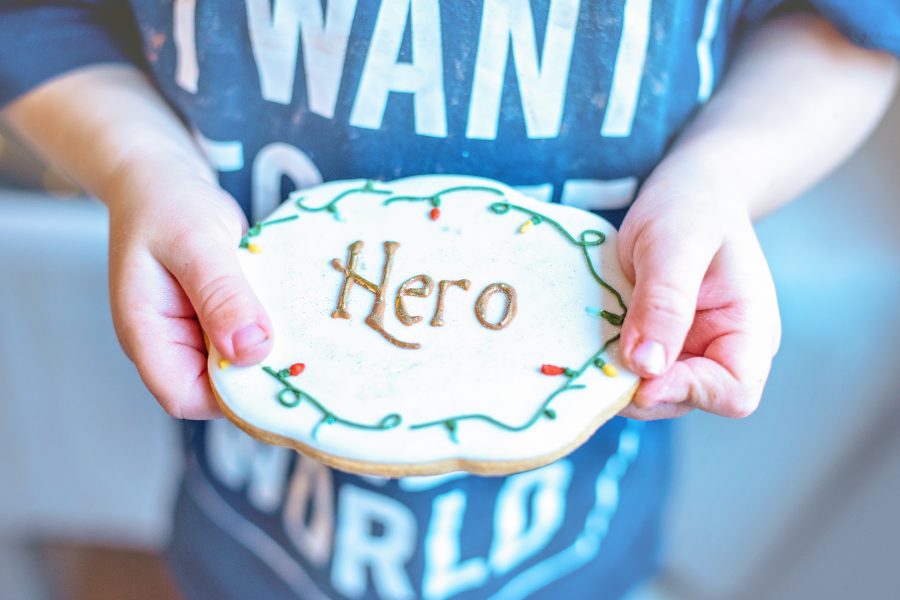 Yes, he decided that his hash browns – all six that he was sure he was going to eat – needed to be covered in Nutella.  Now normally I’d say no, but as this was his special fun breakfast I thought I’d let him at it and said it was fine if he really wanted to eat that.  And he did. Ewwww. 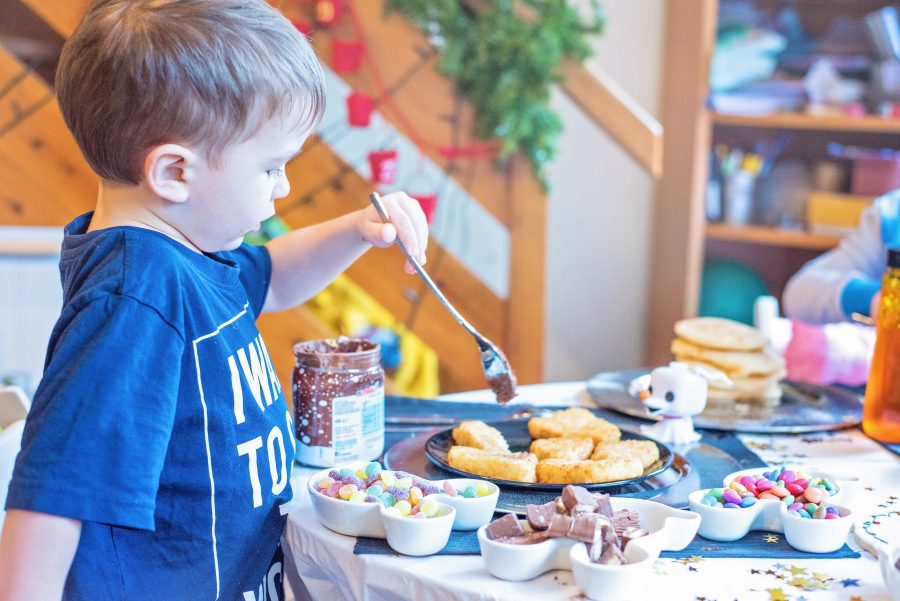 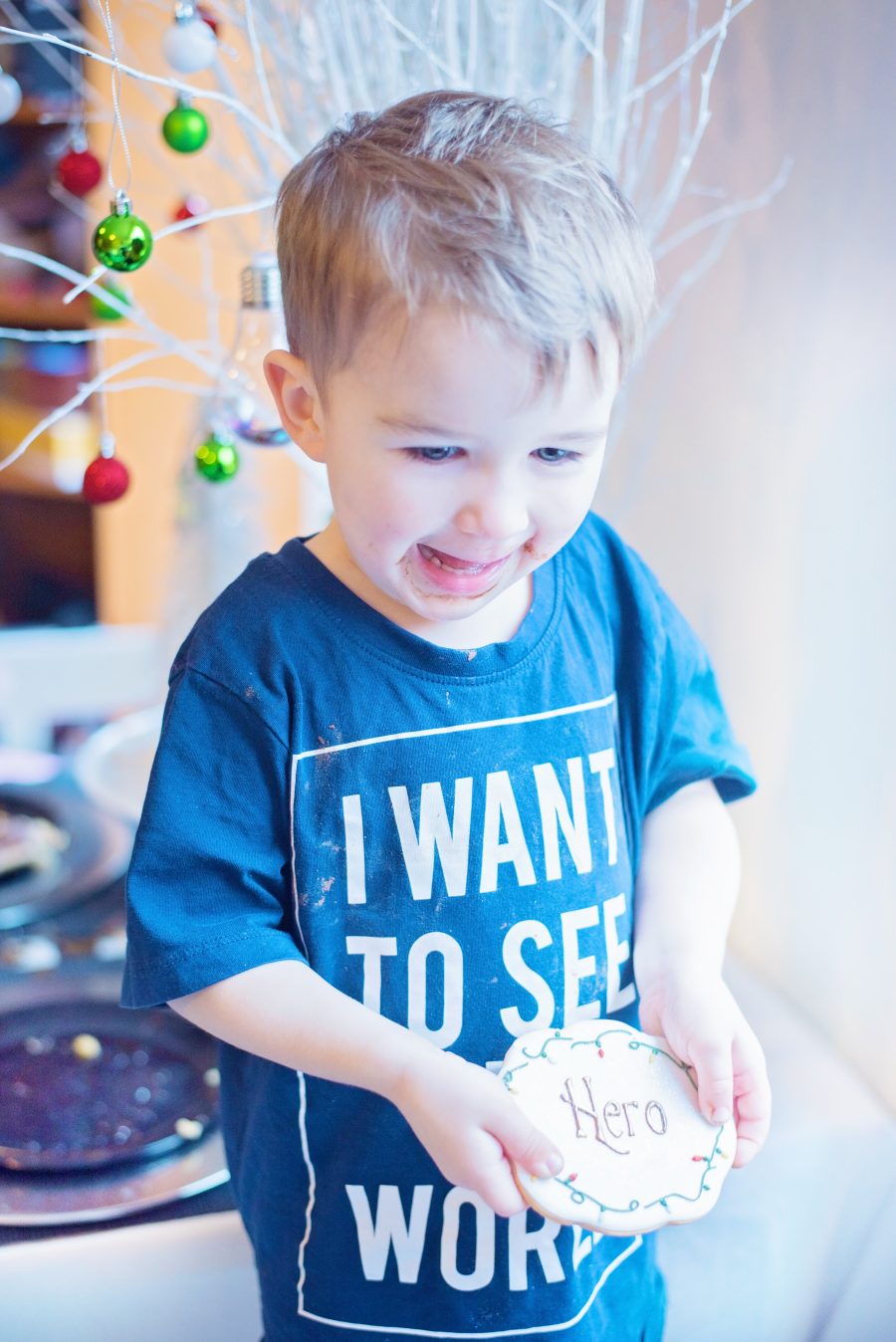 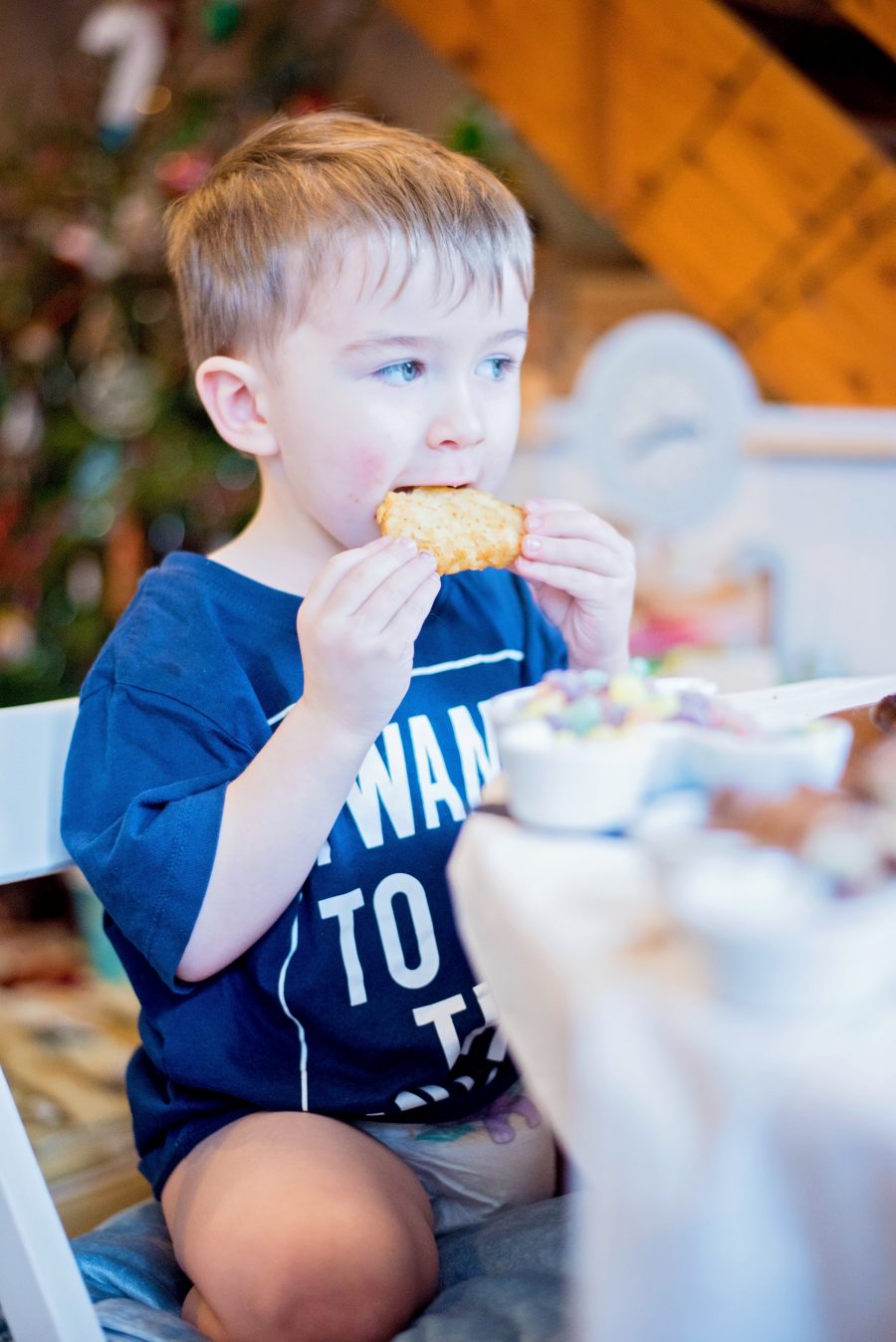 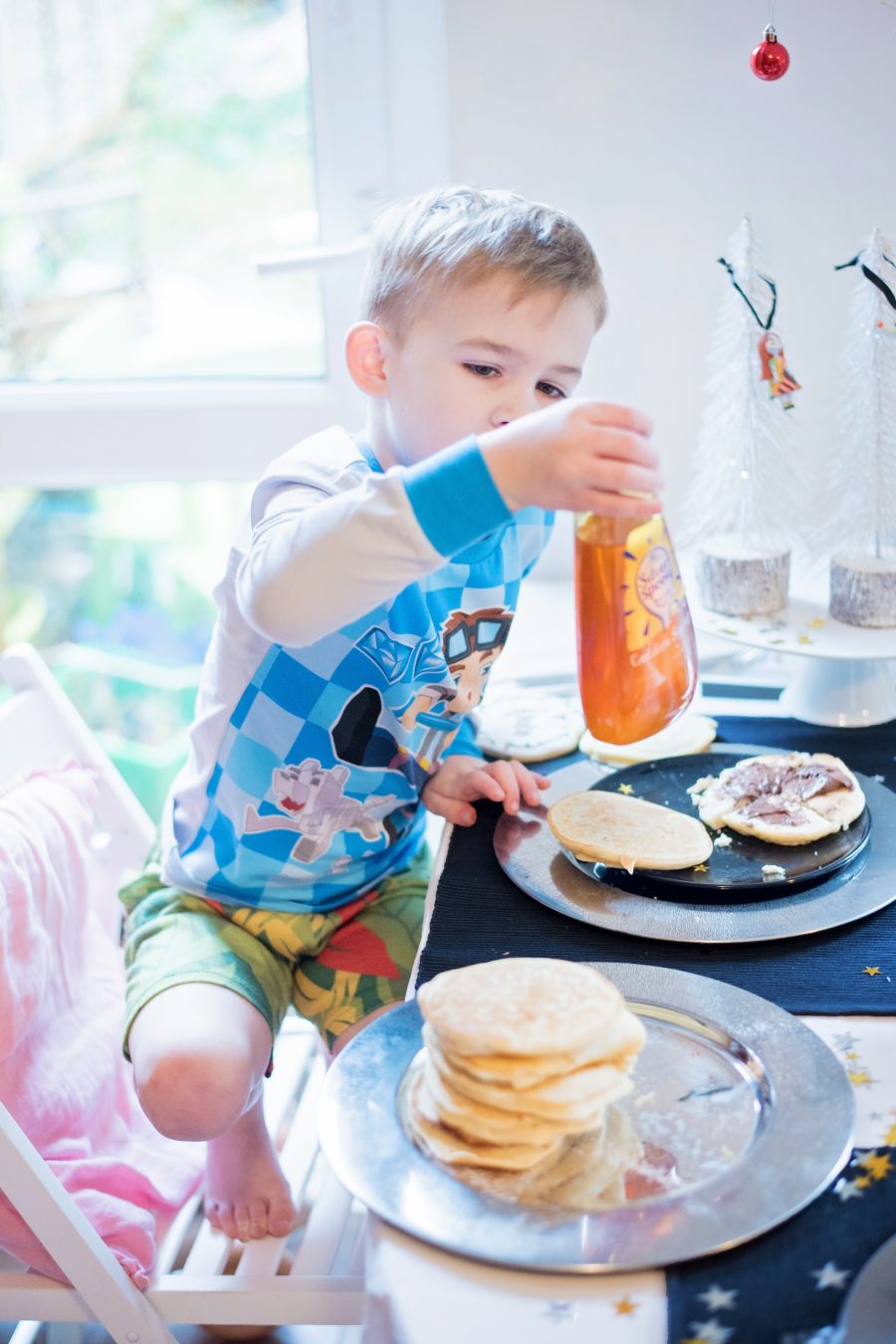 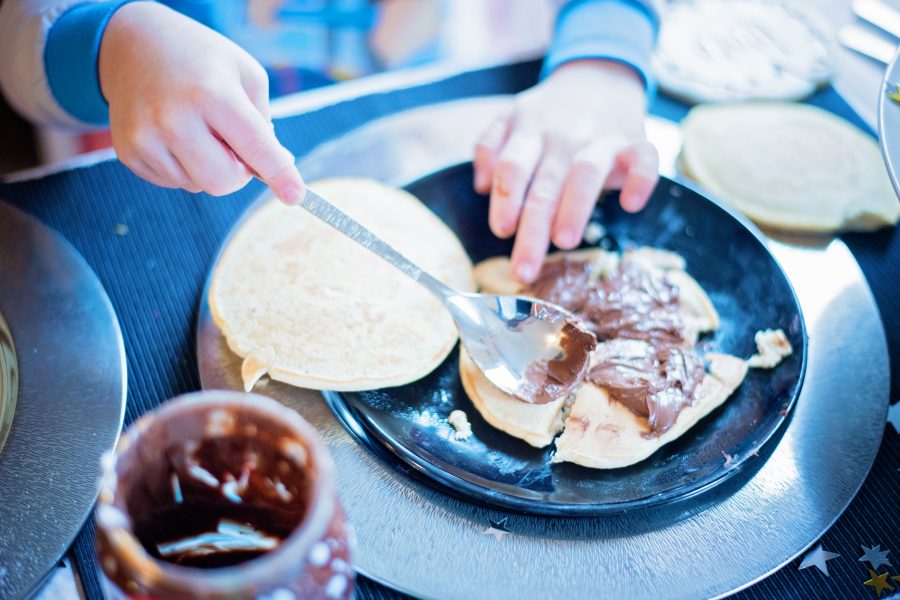 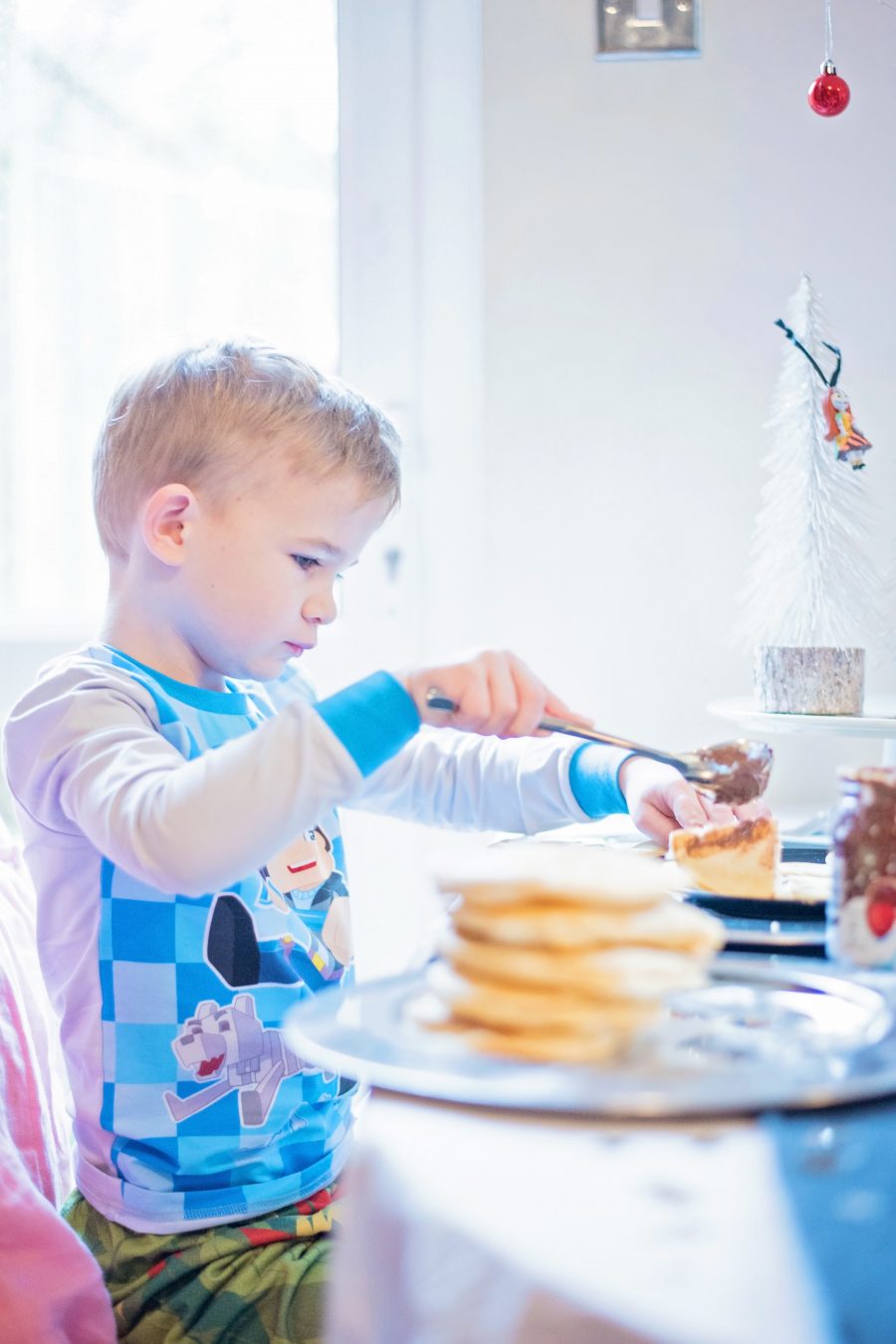 So, we did it.  The only breakfast that they have asked about for months and it was last minute, and as good as I could make it.  Next year I’m hoping we’re all healthy, all happy and that we all get to enjoy our Jack Skellington Breakfast, together.

BREAKFAST AT CLARIDGES AND #GIFTMAGIC WITH MICKEY MOUSE
« [NO] MURDER ON THE CALEDONIAN SLEEPER TRAIN
FLOATING BOATS, SINKING SHIPS [4/52 – 2018] »