SUBSCRIBE TO OUR NEWSLETTER FOR SIX SECRETS TO AN EGG-CEPTIONALLY FUN EASTERTIME AT HOME!
You are here: Home / GAMES AND TOYS / POWER RANGERS 12 DAYS OF CHRISTMAS: THE ROUND-UP

It’s  been a really exciting twelve days for us here – we were asked to reveal 12 days of Power Ranger toys ready for the lead up to Christmas.  They arrived all packaged up with big Power Ranger numbers on the side and every day we’ve been having fun unwrapping and discovering the new toys inside.  Our last fun with Power Rangers was the Dino Charge range and so they were excited to see what new Megazords and the like [I’m slowly becoming a good student of Power Ranger toys] there were.  We made a little calendar to virtually open each day, which you can see on our Power Rangers 12 Days of Xmas Facebook album here, which details every toy too.

First we opened the Power Rangers 12.5cm figures – these are articulated and lots of fun as they all come with a little weapon.  Yotie is Red Ranger he pointed out.  We’ve already convinced Father Christmas to buy some of these for Yotie’s little friend Adam after he saw these, and Adam’s dad is pretty excited to see these appear on Christmas morning, too, and bought a Megazord to go with them [see later]. 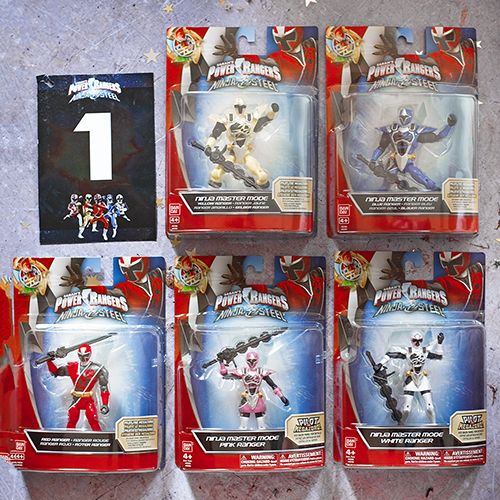 Day two was a huge 30cm Red Ranger.  Yotie tried his best to convince us that this was, in fact, him, and as such, he needed to live in his room with him. 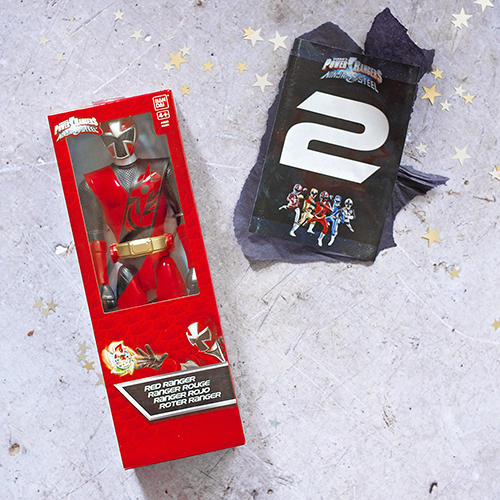 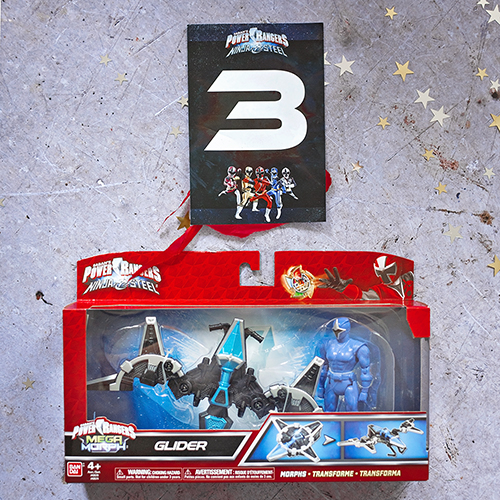 We opened the Ninja Blaster on day 4, complete with three ninja stars for use with the Blaster and other Ninja Steel weapons.  They unlock different features in each weapon – which means if you have a friend with a different weapon, you can swap stars and see what happens! 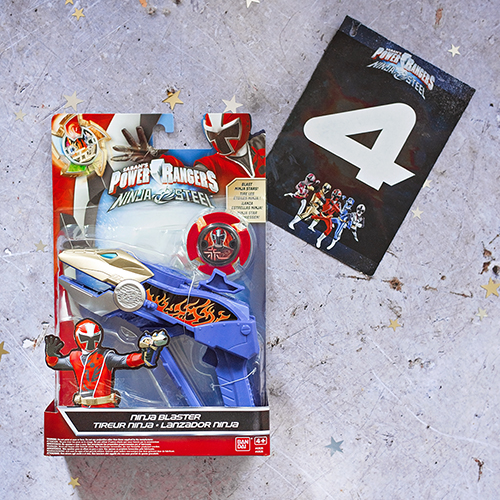 Day Five was the impressive Sword Star Shooter, complete with two of the Ninja Stars for shooting and swapping to unlock features. 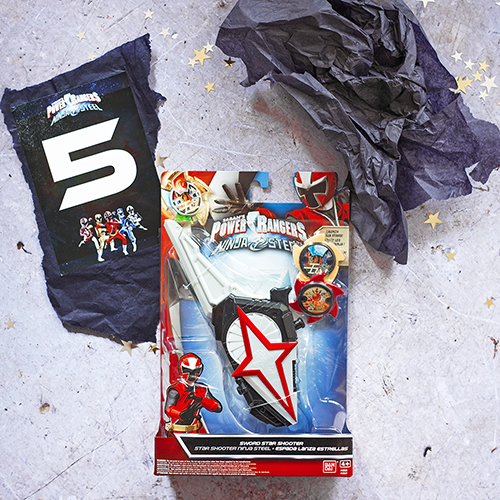 Day Six and the weapons got even more exciting as we unwrapped the Rockstorm Guitar Blaster.  This is Hero’s favourite – a 3-in-1 sword, blaster and guitar that’s only available in Smyths Toy Store, making it extra special.  This comes with one ninja star. 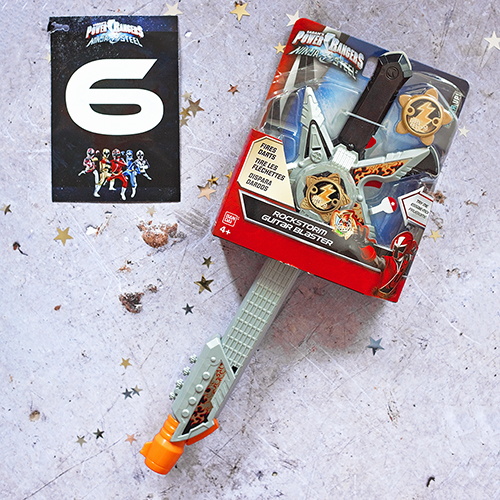 The DX Ninja Star Blade was opened by us on Day Seven of the Power Rangers 12 Days of Christmas – an extendable sword that reaches 24″ with battle sounds and effects.  There’s a ninja star in this too. 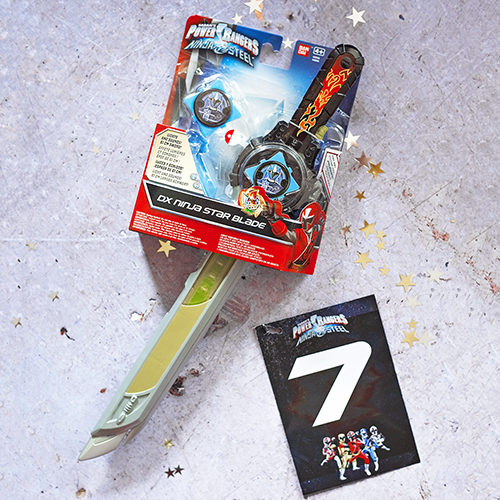 Day 8 and we opened the first of the morphers – the DX Ninja Battle Morpher. In this pack are two ninja stars and the  morpher features hidden weapons for three unique modes: sword mode, claw mode and morpher mode – making it three epic battle gear items in one! 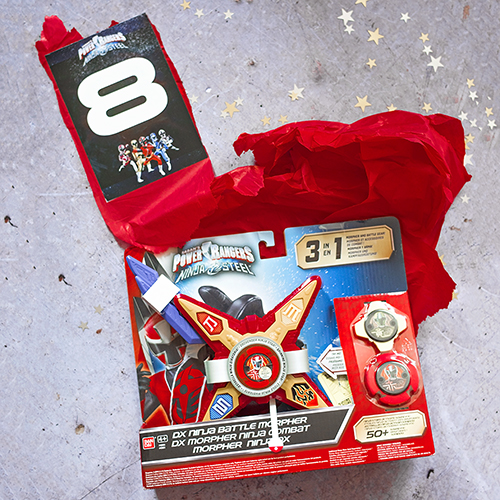 On Day 9, it was another Morpher – the Gold Ninja Battle Morpher. It has hidden weapons for two unique modes: blaster mode and Morpher mode – two epic battle gear items in one! The Morpher comes with two ninja stars which can be connected to the Morpher to activate unique sound effects. It looks awesome and it’s cross-compatible with other Ninja Steel weapons! 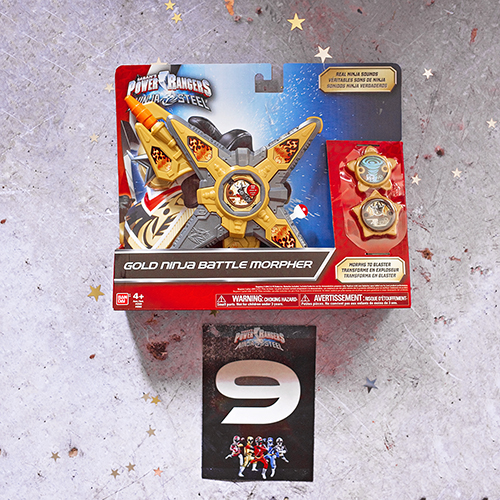 The DX Ninja Steel Megazord was opened on Day 10 and it was so much fun!  The mighty Power Rangers Ninja Steel Megazord combines the power of the 5 Zords to create one epic Megazord, just like in the the TV show! The Megazord can morph into multiple modes, and any Power Rangers figure can ride inside the cockpit! This is a huge favourite with Yotie – his friend has just bought one for his birthday too! 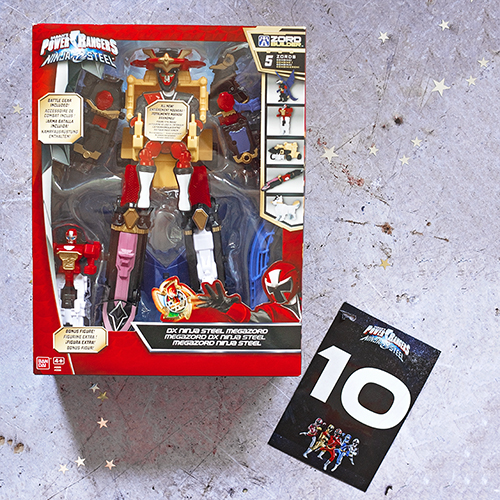 The penultimate day of our#powerrangers12daysxmas was the Ninja Master Blade! Use this to defeat even the strongest villains with the ultimate Power Rangers Ninja Master Blade a sword and chainsaw in one!  When you pull the chain, there’s  triple blade spinning action and chainsaw sound effects. One Ninja Star is also included. 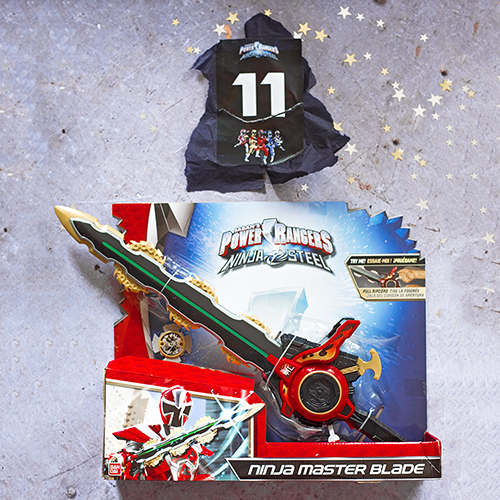 Day twelve, our FINAL day was our Power Rangers Ninja Steel Lion Fire Fortress – the biggest of all the Megazord playsets! In fact, it combines three 3 epic Megazords in 1.  First, it can roll into battle in Fortress mode, firing missiles, whilst you lock up the bad guys in the stockade. Secondly, you can morph it into the towering Megazord mode at over 50cm tall and activate awesome battle sounds; and finally, you can also combine with the Deluxe Ninja Megazord and any 12.5cm Action Figure to activate Lion Fire Ninja Ultrazord, which fires twin blasting bazookas!  An Ultrazord!  It’s pretty spectacular with over 20 battle features – and the box itself is just huge.  We feel sorry for poor Father Christmas with the size of this, but at least it’s in a cuboid box which is easy for elves to wrap.  Whereas the boys think it’s the ultimate Power Ranger toy ever, I think it’s the cutest with its little Lion face. haha.  Sorry boys. 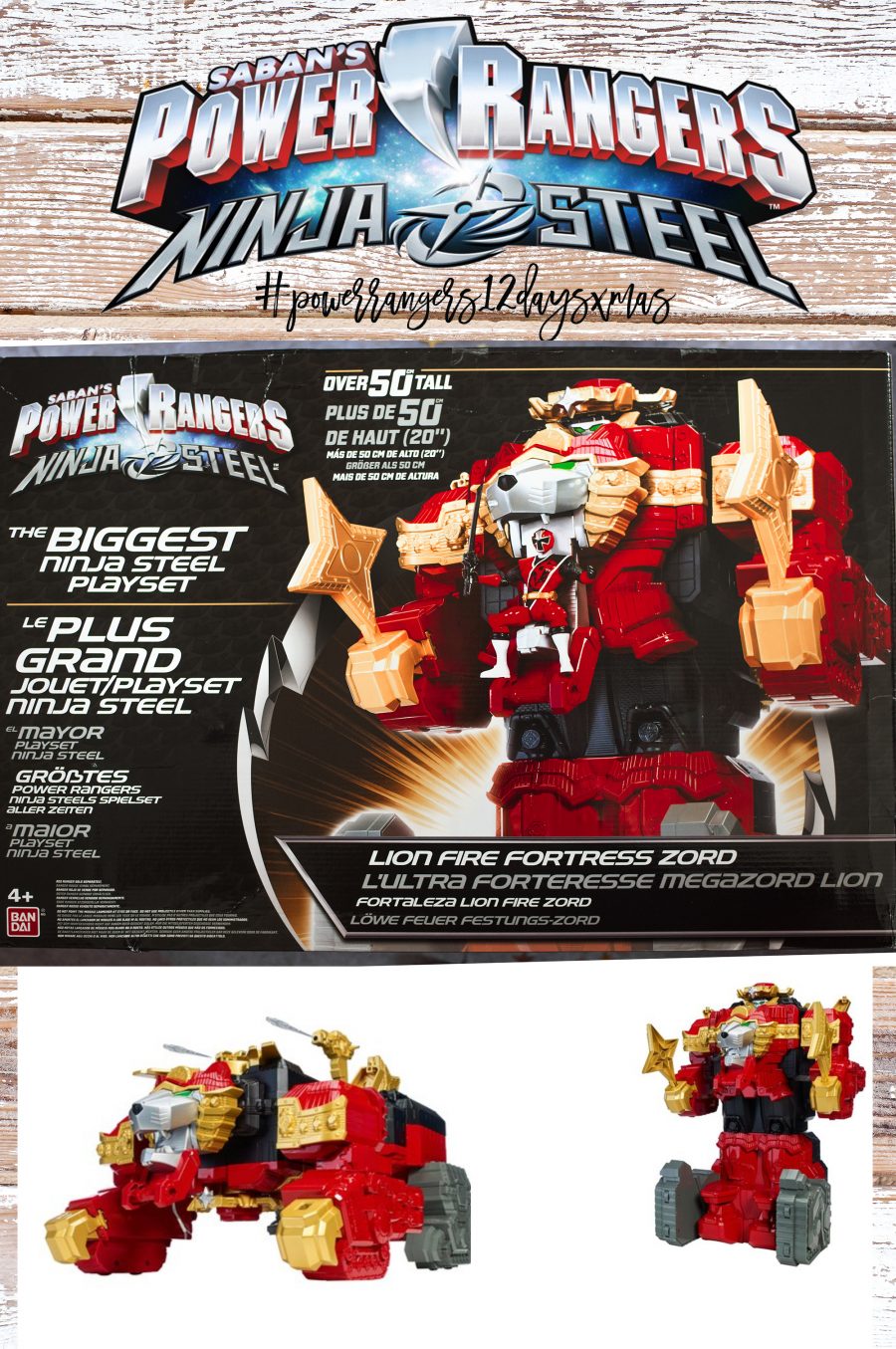 If you’re thinking of asking Father Christmas to bring some Ninja Steel toys this year, as a mom, I have to say that Power Ranger toys are incredibly robust.  I don’t say that lightly either – there are Power Rangers in here that would survive just about anything, I’m sure. They’re solid, well made and they don’t have that horrible plastic smell to them, which I call the Stinker-Frog smell [that’s another story].  There are no ridiculous bits that snap off and they look exactly like the weapons and characters from the programme.  Also, if you’ve been following our 12 days of Power Ranger toys on Facebook you’ll have read that I keep mentioning the ninja stars, that there are 2 usually in each weapon and that they can be used with each toy.

Well, the amazingly clever thing about all of the ninja stars that appear in the different weapons is that as well as all being able to fit in each weapon, they but unlock different effects when you do that!  So, if you have one weapon and your friend has another, you can swap stars to see what happens.  I’m not going to give it away, but we’ve had quite a bit of fun trying them out – and I think they’re pretty awesome and something I haven’t seen before.

Our verdict on the Power Rangers Ninja Steel range is that it’s pretty cool.  Yes, I said it.  Cool.  haha.  The boys love them, their classmates love them and Father Christmas is delighted that the range has something for everyone at different price points – from £9.99 upwards [and sometimes cheaper if you can find a great deal on Amazon]!  They’re exciting, great value and the Lion Fire Fortress is really a toy to be reckoned with.  If you have a Power Rangers fan in your house, this is sure to be at the top of their list.