It’s no secret in our family that whichever man we ask for any gift ideas, we get the same answer.  And it’s vague at best.  So this year I’ve taken matters into my own hands and done some research on the market way ahead of time to bring together some of the best ideas I can find for the man who [says he] wants nothing.  Here’s our Christmas Gift Guide for Men 2017. 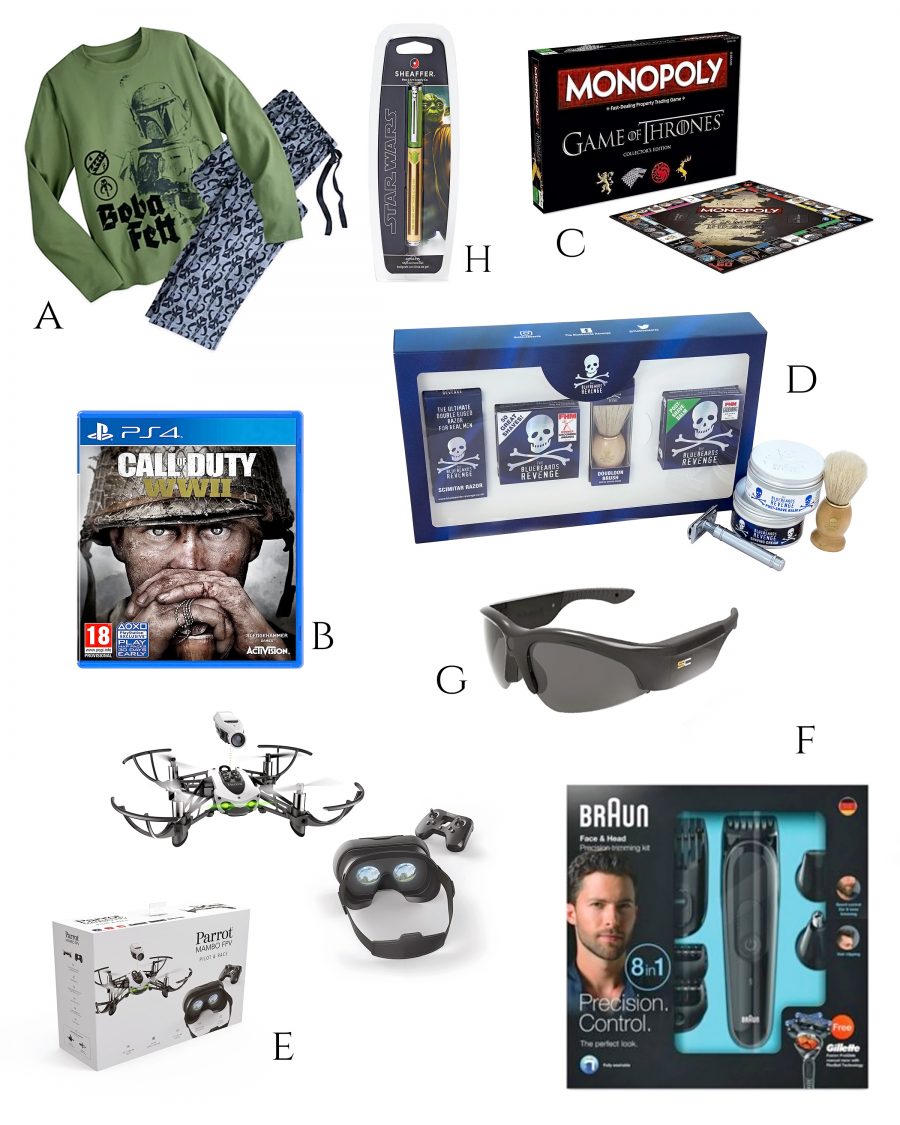 Those items below marked with an asterisk have been sent to us as PR samples or gifts – but they’re ones that we’ve loved, or we wouldn’t mention them!

I recently bought these myself from the Disney Store for Gav.  He’s a huge Boba Fett fan and I’ll be winning many super-wife points this year with these – or I would be if I didn’t think the boys were going to pretend that they got them for him instead of me.  Disney PJs last brilliantly and wash well, and I know he’s going to just love them, especially since they’re practical and not just extra items that he doesn’t really need.

Nearly every gamer I know is excited about the Call of Duty games and so this is a pretty sure fire choice this year.  It’s a first-person shooter game available on PS4, XBox and the like.  The new version I’m sure is fantastic and my niece’s boyfriend is already hinting about this to her.  It was released early this month and so if you’re thinking of buying this for Christmas I’d invest sooner rather than later.

I’m learning to play grown-up board and card games at the moment and I was doing reasonably well until Gav broke out the Game of Thrones strategy card game.  I’m completely flummoxed so far and I can see the disappointment on his face that he’ll probably never be able to enjoy this game to the fullest, and so this feels like a great compromise.  I know Monopoly, he loves Game of Thrones.  It’s a perfect addition to our new Mario Gamer Monopoly and our already owned Minion Junior Monopoly.  You can never have too many Monopoly sets in the house.

Every product on this male grooming site is beautifully engineered and put together.  The Bluebeards Revenge Scimitar Double-Edge Razor Kit is an ice cool blast from the past, starring their iconic double-edge Scimitar safety razor (no blades included but available from all good chemists), which my own husband loves, and one of their best-selling Doubloon bristle shaving brushes, together with enough barbershop-quality shaving cream and post-shave balm to last at least two months – more if you have someone who loves to grow his beard for a while [like my husband].  This has been the most coveted grooming set in our family so far.

We have the Parrot Mini Drone* in our home and it’s amazing fun – and provides hours and hours of entertainment.  Imagine having one of the cast of Batteries Not Included in your home. He can fire teeny missiles and pick up little things in his arms.  The Parrot Mini Drone is controlled by your iPad or iPhone via an app and is so easy to fly that even our Beans, who’s three and a half, can do it.  It’s a fantastic choice – I can’t think of anyone I know who hasn’t wanted to have a go and then been instantly hooked.  This is the newer edition and it’s sure to be fantastic fun.

Every man in our family has a beard or moustache [or hair] – and every man in our family actively avoids the hairdressers/barbers.  This brilliant piece of male grooming equipment does everything in the comfort of your own home without a hefty price tag each time a trim is needed, or the pain of sitting in a waiting room.

These we have owned for quite some time and I know that Gav loves them on daytrips especially.  Officially, they’re HD video recording sunglass eyewear with a built-in 1080p camera, UV400 interchangeable lenses and a Grilamid TR90 high impact resistant frame technology and are designed to handle the active lifestyle.  Unofficially, and in our family they’re “spy glasses” for the boys. Haha.  Seriously though, we’ve used these in places where you need two hands to hold onto little people and still wanted to capture the view – like on the chairlift at the Needles on the Isle of Wight.  In well-lit situations, the camera is pretty amazing and it’s so much fun to watch what you’ve been looking at with the glasses on.

If your house is like ours, it’s virtually impossible to keep a pen to yourself.  I remember my dad having his own Parker Pen when I was little so that he didn’t have to go hunting for one constantly – and as I’m pretty sure that Gav is now tired of signing things with Sharpies, this is the perfect gift – especially as you can also buy notepads to go with the pens!  The Star Wars touch is really lovely as it turns the pen into something that my boys would actually pick for their dad.

I hope this guide has given you some ideas as to what you could buy for the men in your family!

A CHRISTMAS GIFT GUIDE BY A SEVEN YEAR OLD BOY

CHRISTMAS GIFT GUIDE FOR HIM 2018

CHRISTMAS GIFT GUIDE FOR HER 2018