Finally, it’s here – my boys are old enough to want to play board games at the weekends – and just in time for Autumn, hot chocolate and pumpkin muffins too. Haha.  Seriously. I’m so happy – and although I hate wishing their childhoods away, I remember playing board games with my parents and it was the BEST time when they’d sit down and play Hotel, or Monopoly, or whatever we could get out easily to play with and not lose all the bits from.  Granted, Hero isn’t quite there, but he’s more than happy to be part of a team [the winning team] and so Family Games night is about to become a “thing” officially in our house. This is even better than movie night.

For our first ever REAL games night [can you tell I’m excited?] we played two new games – Boom Blast Stix and Five Nights at Freddy’s Jumpscare Game.  I may or may not [I did] have used this second game as bait to get the boys interested as EVERYTHING is FNAF in our home at the moment.  I know more than I’d like to about the creepy little creatures, to the point that when I visited Forbidden Planet in Southampton I was able to have an intelligent conversation with the teenagers in there about the characters in Freddy Fazbear’s pizzeria and also get some of the cutest toys surrounding the game for their Hallowe’en baskets this year.  I feel as though I’m just about keeping up with my boys now.

Anyhow, the games.  I’m going to say that if you’re of a nervous disposition, neither of the games from this week are a brilliant idea unless you love being on the edge of your seat and leaping out of it over and over.  Luckily for me, I’m too tired to jump.

First up we had Boom Blast Stix which is the shortest in terms of game time, yet possibly now most played game in our house.   I love this game so much.  Inside the cylinder/cone tub are 32 little yellow plastic pieces which need to be assembled carefully by locking them into a triangular shape.  Players take it in turns to lock a piece and stack it carefully on top of the game cone.  The aim is to pile all of your share on without anything triggering one of the pieces to spring apart, which has the knock on effect of triggering all of the other pieces in the pile to do the same without warning, which explodes the pile everywhere – BOOM! Playing on wooden floors means that these pieces go for quite some distance.

…that there are no batteries!

…how I can count the pieces easily and they all store with space to spare inside a non-crumpling, non-cardboard cylinder.

…the lack of  complicated instructions.

…that this is a game everyone can play.

…that it’s addictive with a huge consequence that makes the game unforgettable.

The game is on sale at around £18, and we’d absolutely buy this if we’d tried it beforehand. 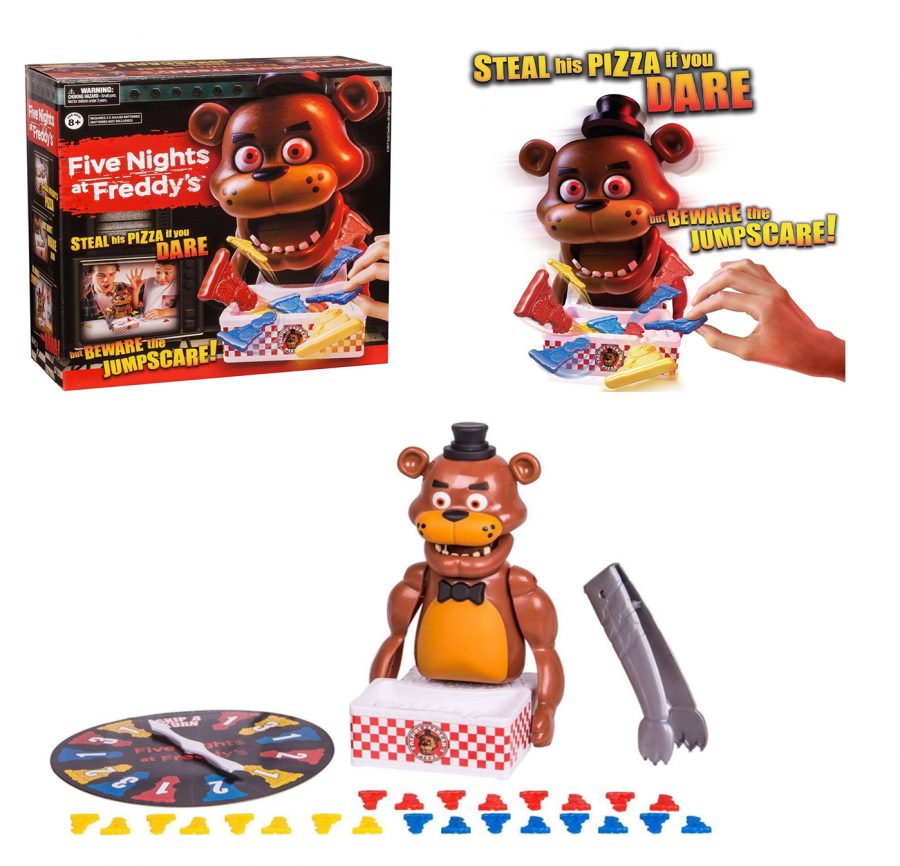 Second up was Five Night’s at Freddy’s which is a jumpscare game, based around the video game of the same game.  This reminded us of Who Stole Buster’s Bones which used to terrify the boys a couple of years ago, but they were so excited to see something FNAF enter the house that they were prepared to brave the format just to see Freddy Fazbear.

Freddy sits above his pizza tray whilst little coloured pizza pieces rest in the tray, which has to be pressed down before using.  Players then take it in turns to spin a wheel and see how many pieces of which colour pizza are needed to be taken with tweezers from Freddy’s pizza tray without waking him up.  This alone would be enough pressure, but added to the mix is a creepy tune played whilst Freddy Fazbear sleeps, just like in the game.

The boys were simultaneously terrified again of taking pizza and mesmerised by the toy and so for the first few times, Hero [who cares not about creepy music] and I were the only players until they’d laughed enough times at me being leapt at by a cranked stuffed plastic bear.  They took great delight in telling Granny and Grandad on the phone that I’d been “legit” jump scared, and it was a sick game.  Legit.  Coming from a 5 and 7 year old.

…that the game is brilliantly made, and looks just like Freddy Fazbear.

…the creepy music, which really adds to the atmosphere.

…that everyone can play, there are no complicated instructions.

…finally the boys have something of FNAF in the house!

…that is actually works. I’ve leapt a few times when caught out.

Truthfully, if we hadn’t reviewed this game for Games night, I know they would have asked Father Christmas for it – despite being slightly too scared at the moment to play it alone; but then they are only 5 and 7, and I can’t remember being super brave at that age either.  The game is on sale at around £24.

FUNNY BUNNY BOARD GAME REVIEW: A GAME FOR EVERYONE
« BEN 10 TOYS TWITTER PARTY RECAP
BACK TO SCHOOL BUCKETS »