SUBSCRIBE TO OUR NEWSLETTER FOR SIX SECRETS TO AN EGG-CEPTIONALLY FUN EASTERTIME AT HOME!
You are here: Home / DISNEY / MICKEY AND THE ROADSTER RACERS SUPER TRAINING TRACKS

“We’re gonna gear up for fun, we’re revvin’ up for adventures…”  We’re so happy that Mickey and the Gang are back on TV in something other than the Mickey Mouse Clubhouse adventures.  Hero is absolutely smitten with Mickey and the Roadster Racers on Disney Junior and his little eyes grew as wide as saucers when he opened today’s parcel to find a Mickey and the Roadster Racers Super Training Tracks set for him to review.  We waited until after dinner so that thankfully I didn’t have to put it together.  Gav took care of it as a treat for the boys [and me, I hate instructions] but it did take a little while, which seems even longer when you’re three Mouseketeers waiting to see whether Pete the Cat is going to try anything sneaky to defeat Mickey Mouse on the track.  Assembled it’s 100cm long – and about 50 cm at it’s tallest which essentially means you’re going to have to hurdle it at some point in your day. 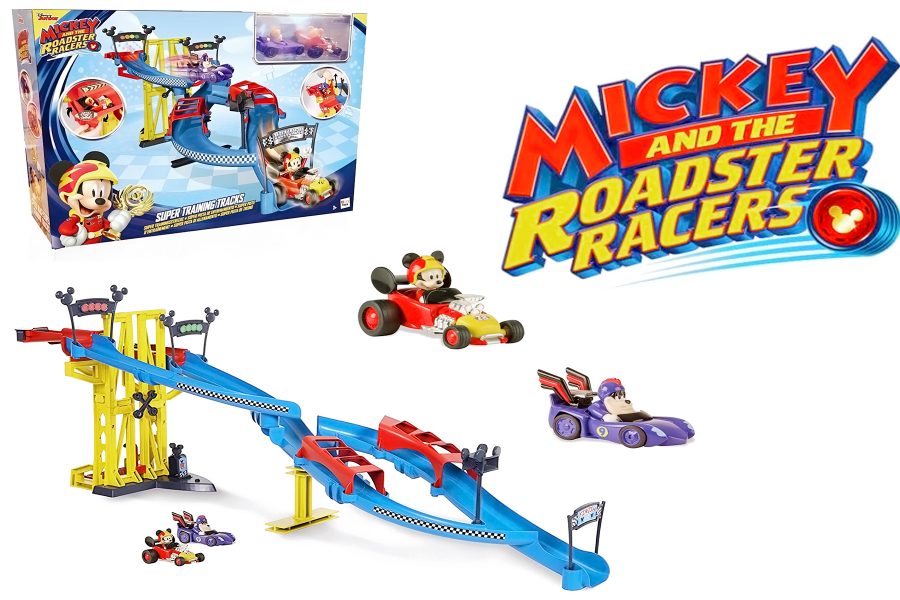 Inside the set alongside the track are Mickey Mouse and his Hot Doggin’ Hot Rod, and Pete the Cat with his Super Crusher.  They’re positioned at the top of each track side – travelling there by the elevator on the toy until the cars are shot like pinballs from the top of each podium to race to the bottom.  The cars each have a little surprise to overcome on the way down, and they can also refuel at the bottom of the elevator whilst waiting for other cars to compete.

If you’re wondering where the photographs of the boys are, they’ll be here soon – my Nikon has been recalled for a shutter issue and so I’m just waiting for him to come back 🙂

…that this can be played with immediately because there are NO BATTERIES REQUIRED. Father Christmas, take note.

..discovering that SO many of our other cars can fit down this track.  It’s wide enough to let the rest of our Disney cars down which means that although there ARE the rest of the Roadster Racers available to buy, you don’t have to.  Our boys had little teams of cars in a knockout battle, which prolonged the playing time instead of just the same two cars over and over.

…how fast this toy has been produced. Usually when there’s a new TV show, we are waiting months and months to see any merchandise and as a parent, that’s very frustrating when there are birthdays and holiday

..,that Mickey Mouse toys are back!

…that it was a little easier to store.  Once it’s assembled, it’s not that simple to put away anywhere without completely taking it apart again.  Ours is staying assembled because once we take a little part off, it will wander.

…the finishing flag had been a little studier – ours snapped off and the boys were very sad about that.

…honestly that all of the Mickey and the Roadster Racers had been included.  I appreciate that this isn’t considered the best idea for toy companies as they want to maximise profits, but I’d feel so much happier investing more often in toys if I didn’t feel I was just being pushed to by more immediately.  There are only 4 more Roadster Racers, it’s a shame they couldn’t be included as a full set.

The set is priced at £39.99 and as far as plastic toys and price tags go at the moment, this is a big toy for a smaller price tag. It’s well made, lends itself to play with other vehicles and I’d absolutely have bought this for Christmas is we weren’t reviewing it.