I had no idea that we were going to be enjoying our first Backyard BBQ of the year this weekend – but when I woke up on Saturday, Gav casually mentioned that he’d already invited his parents over for just that – that afternoon.  After the fastest get-your-clothes-on-and-get-out-of-the-house-and-into-the-car performance in recent history [second only to the “I can’t believe we fell asleep and nearly missed the school run” emergency dash] we arrived at Costco and emerged an hour and a bit later with a trolley full of BBQ bits and pieces – and a whole lot of toilet paper, of course.  Who doesn’t go to Costco for toilet paper?!

So, a whole lot of charcoal and burgers, chickens and salad entered our house along with two snoozing boys and one who was tired but not giving in.  This has got to have been the fastest set-up of a BBQ we’ve ever done – which was probably down to the fact that Hero and Lyoto were both asleep instead of terrifying me near the BBQ as it got started.  I don’t know how I’m not completely grey haired every BBQ season – or why I continually seem to choose BBQs for Hero’s Summer birthday parties.  Torture. 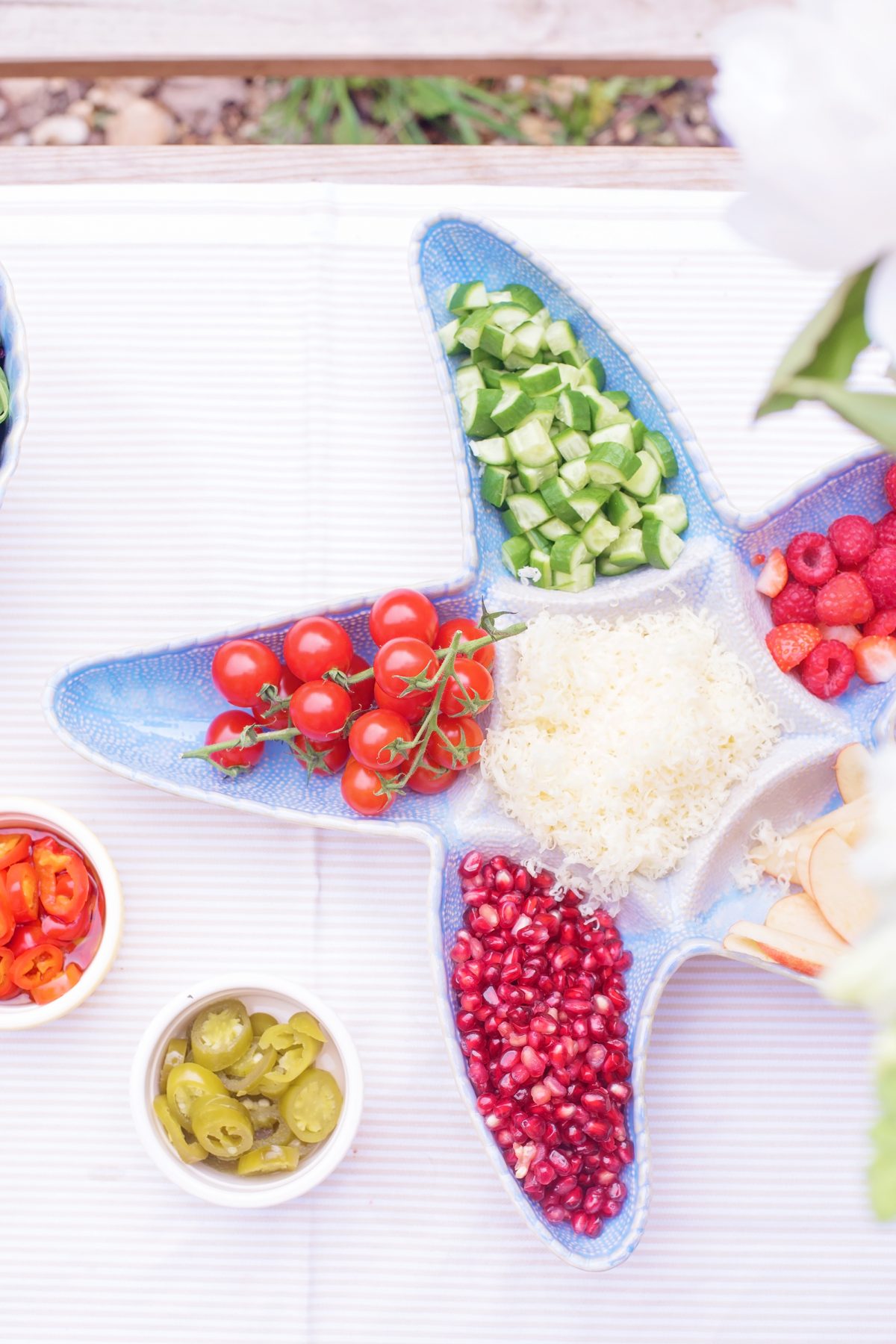 Remember how I said that I was saving my beautiful Triton Amara tableware for the seafood meal I had planned?  Well, that plan went by the wayside and I decided to break it out for the BBQ.  It looked so, so gorgeous and the boys loved that the bowls were anemones and starfish.  I saved the mussel plate though for when we actually have mussels.  I’m going to collect the rest of the set because I’m just so in love with the blue pearly inners of each piece. 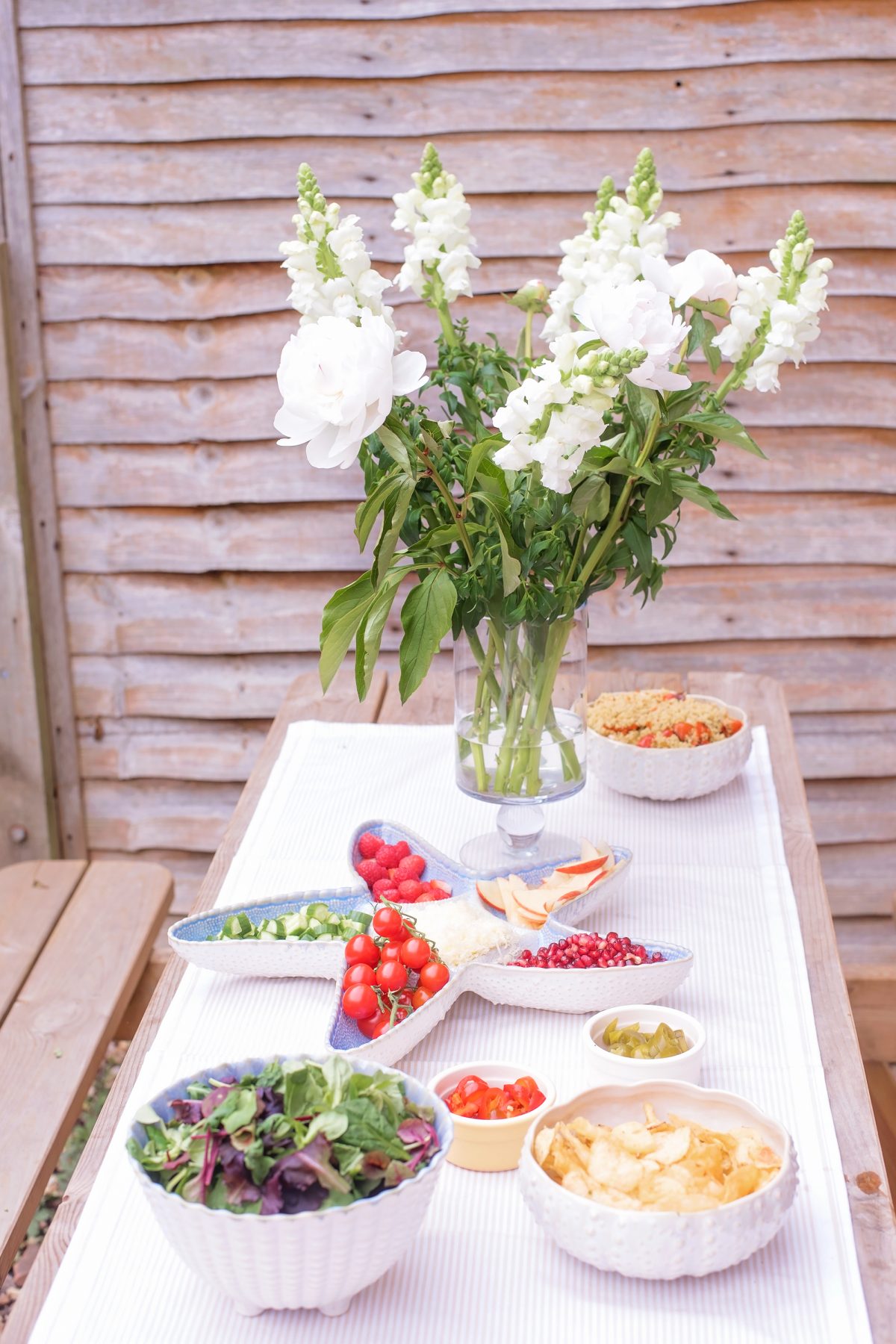 Nanny and Grandad arrived and Hero woke up a few moments later as Jensen was showing them both his new slow worm discovery.  We’re on cat patrol in the garden as they love to hunt them and torture them for a while.  It’s disgusting and so we watch carefully from the living room for any suspicious feline behaviour.  We also have quite a few little newts this year, which makes us sad because they obviously have no homes now the fields have all been built on.  Our pond was disassembled before Jensen was born and so there’s nowhere we have that’s safe for those little guys either. 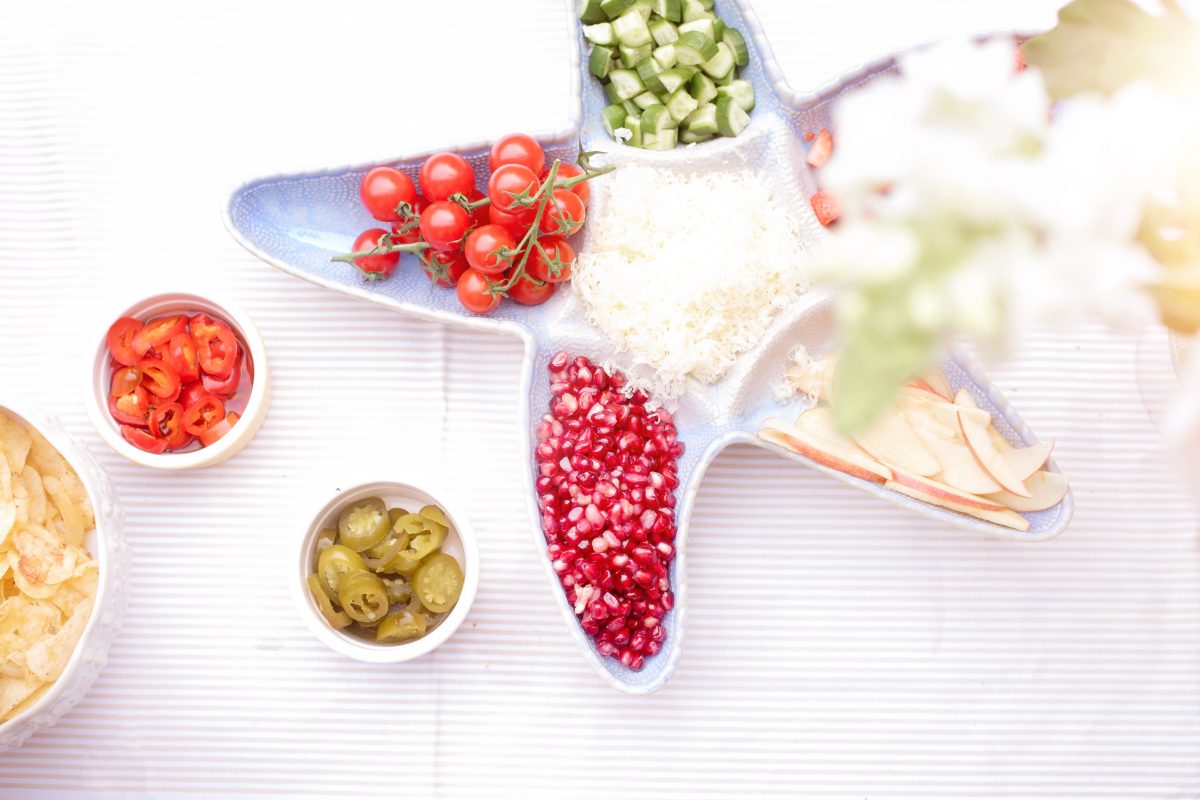 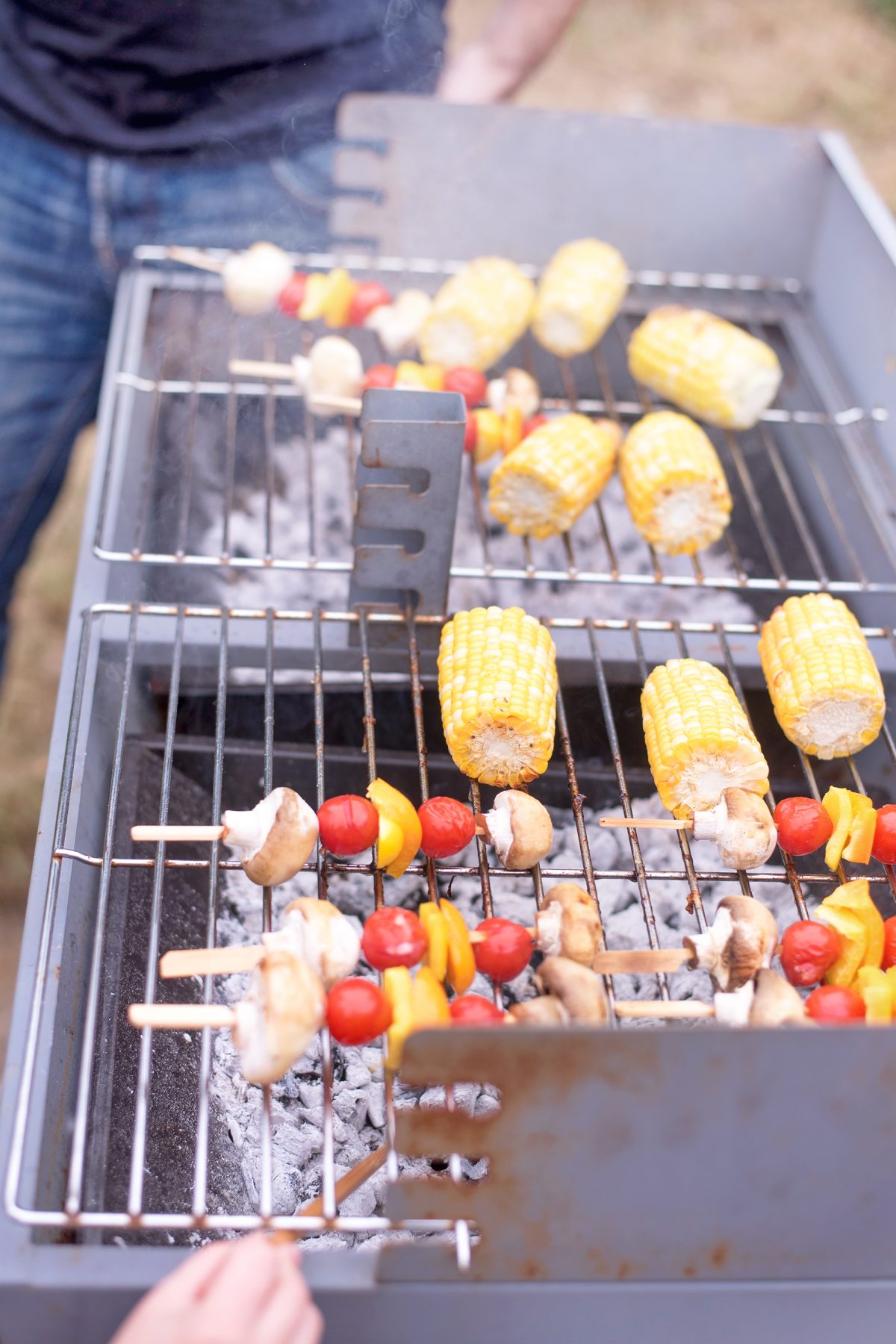 Anyhow, back to the Backyard BBQ – I had a burger [and then complained about eating it and how much fat it probably contained now that I’m 1/2 a pound from losing 2 stones in 2 months at Slimming World.  In any case, I ate enough vegetables and salad to hopefully convince my body that it wasn’t that bad.  We’ll see on Wednesday!  Jensen enjoyed watching the BBQ with the mister – he concentrated so hard on making sure the corn didn’t burn.  BBQ foods are Jensen’s favourite and he’d eat them every day of the year if he could – I would too.  There’s something just so much better about eating food outdoors.  Grandad bought a trout over that he’d caught and so we got that onto the grill too, with the burgers and vegetable skewers.  We roasted some peppers on the hot plate indoors and mixed them with the cous cous too.  So good. Although if I’m honest I’d have LOVED some mayonnaise, haha.  Sorry fellow SW’ers. 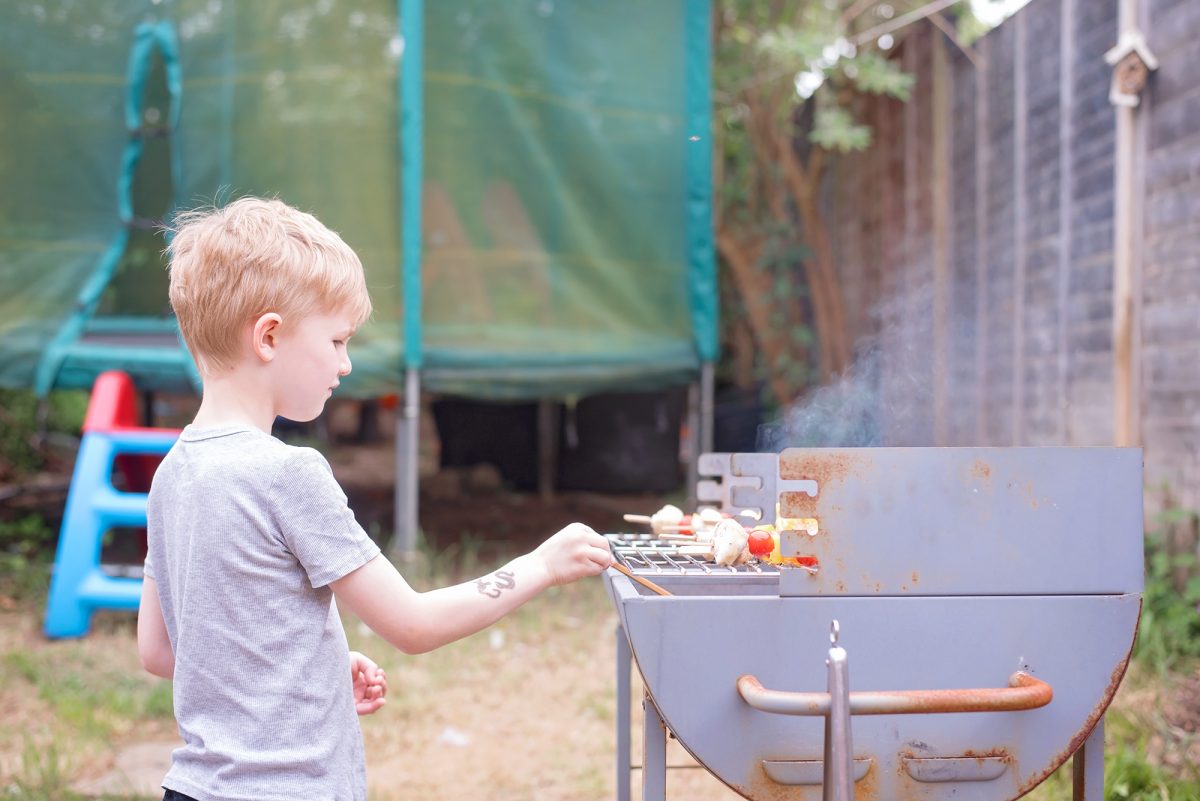 Grandad also bought some merguez sausages with him from France.  The mister loves these and even though we can sometimes find them at the Hampshire farmers markets, there’s nothing like real French ones apparently.  Jensen thinks so too. 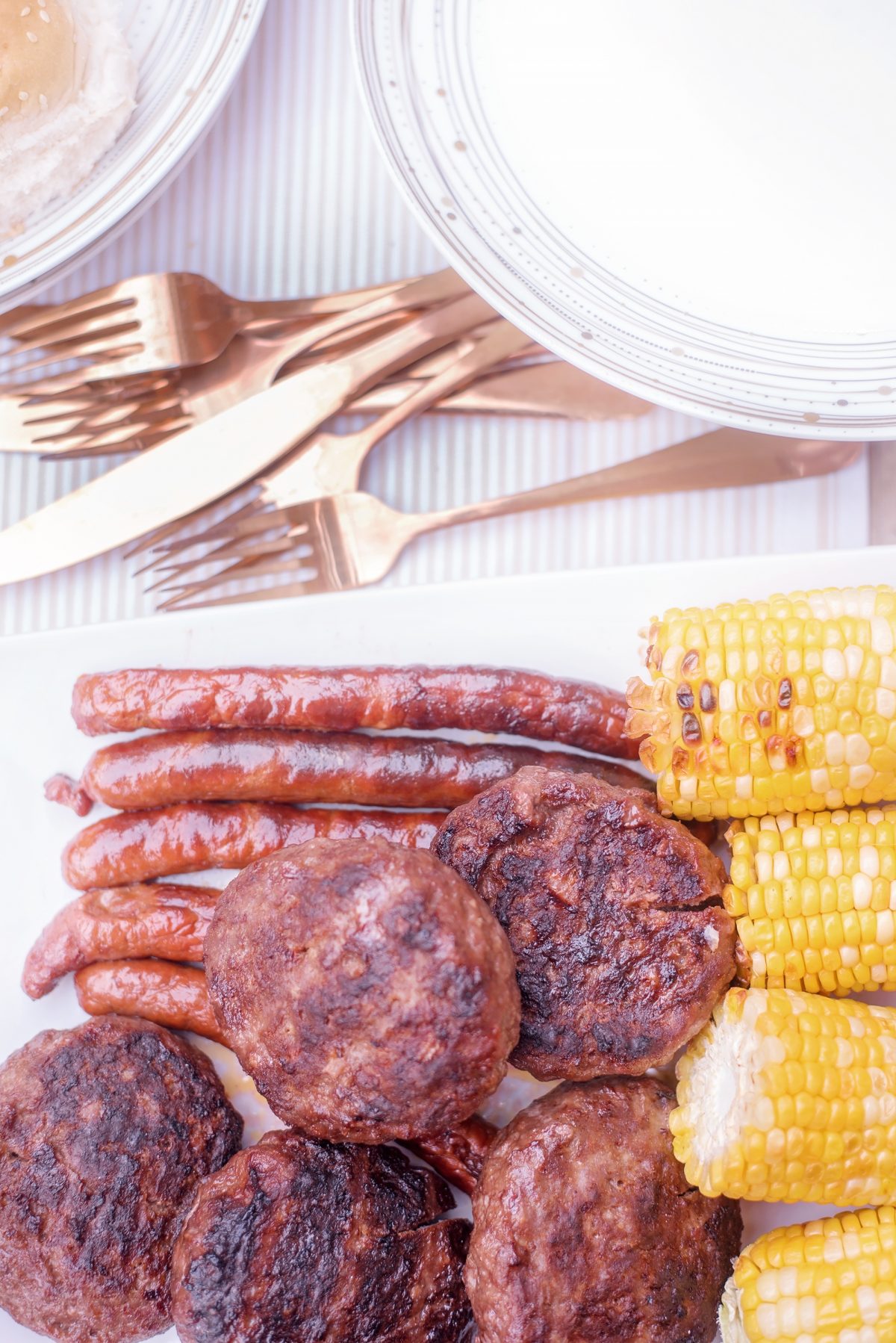 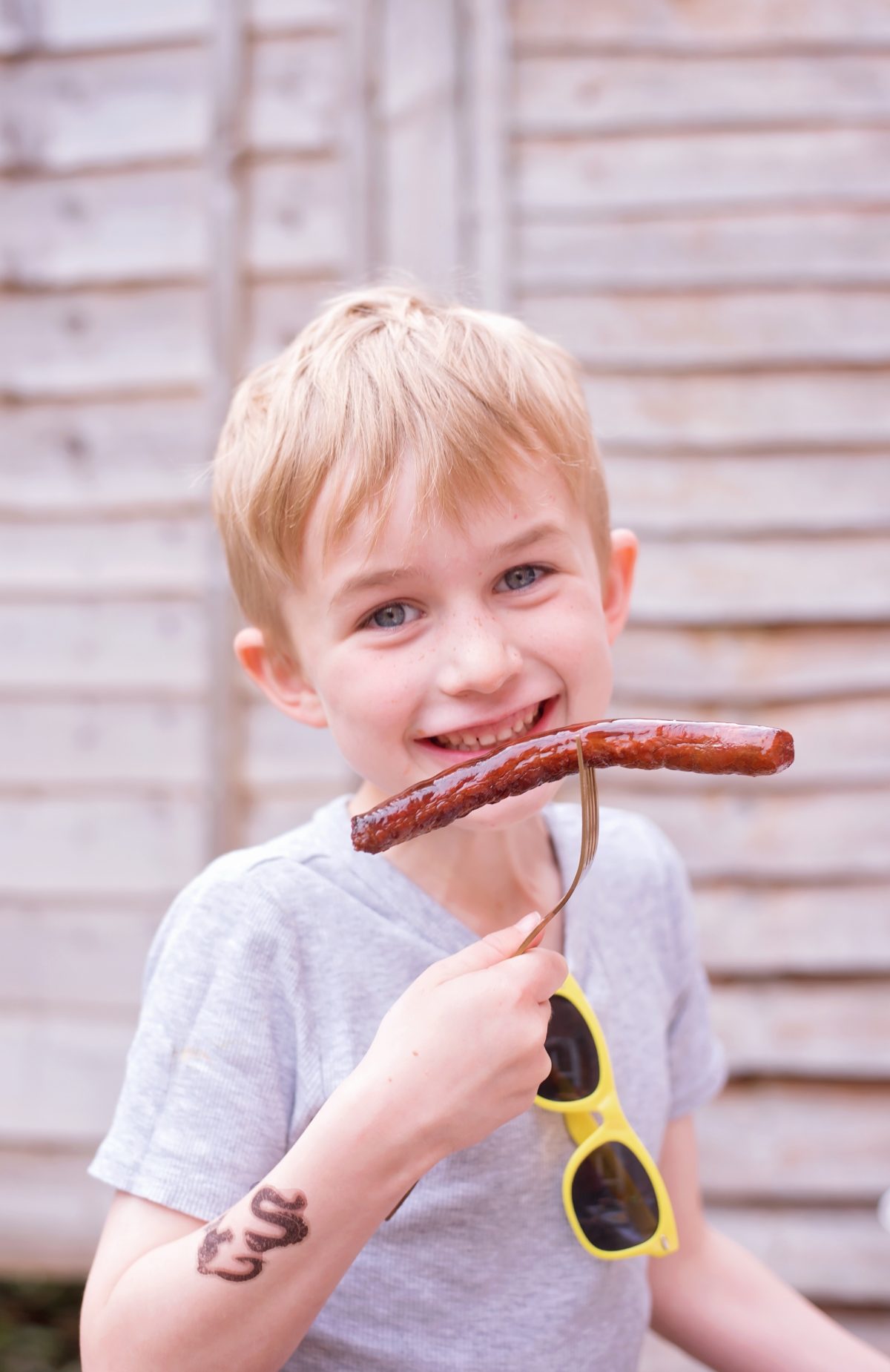 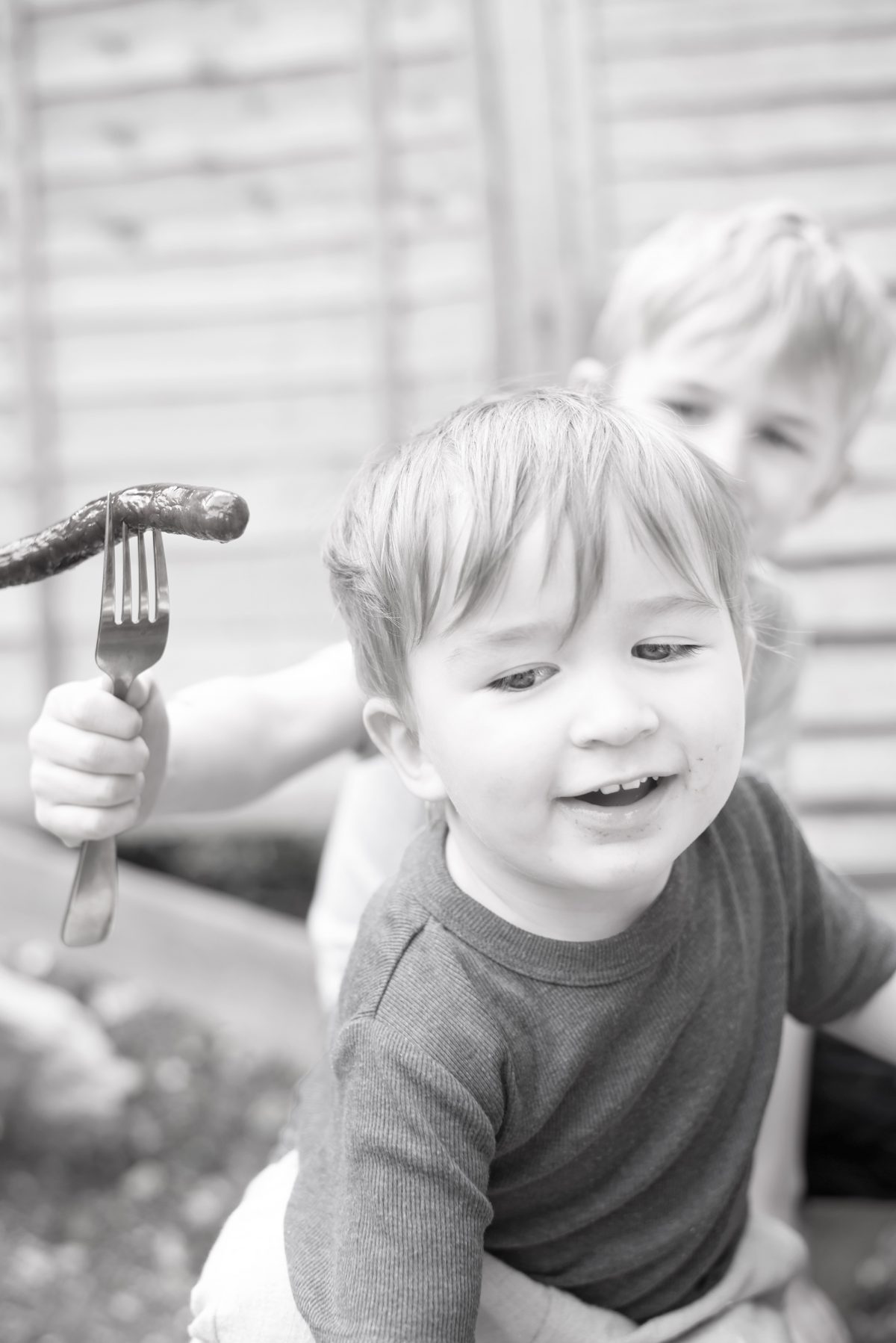 Whilst we were in Costco, we also had the brilliant idea to make some Raspberry Tom Collins cocktails.  I had absolutely no idea what I was doing but I managed to beat about 30 raspberries into pulp, add some sugar and lemon juice, and then the mister did the rest. It was so good – I even had a headache after!  I’ve had about ten drinks since we were married in 2008 – and two of those were mulled wine, haha.  Maybe I might start my own regular “Mom’s Cocktail Hour” on Saturday nights 😉 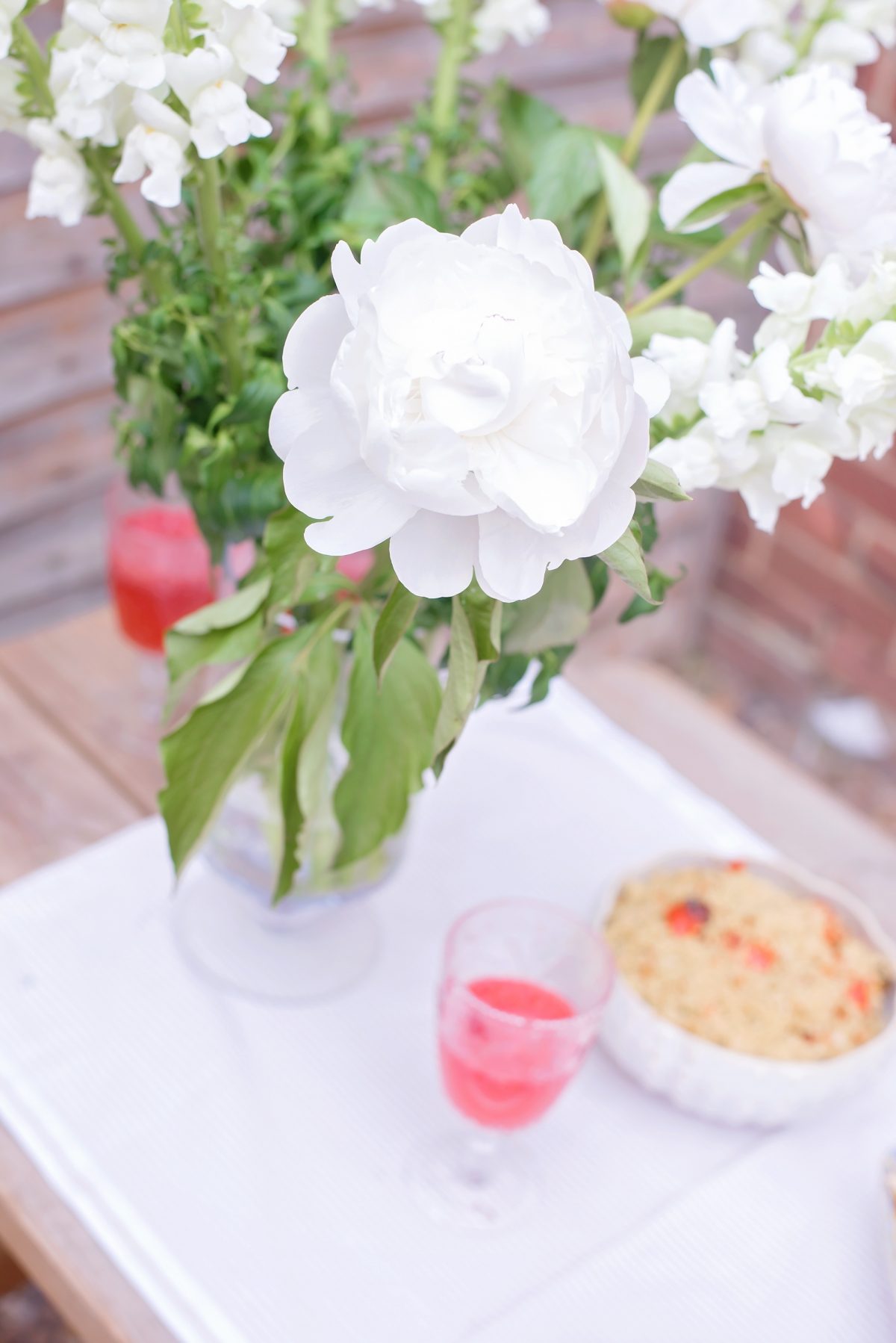 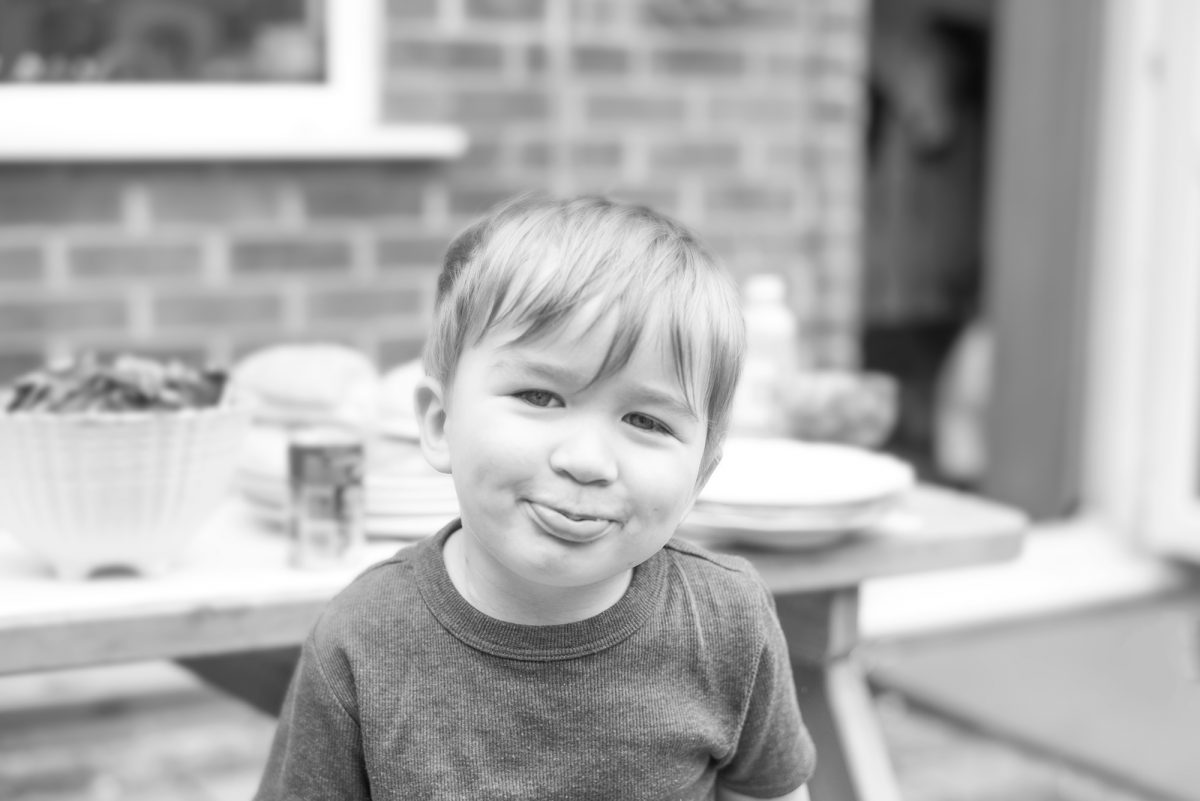 Someone cheeky came out of his shell and decided to blow some raspberries at me whilst I was trying to capture a cute photo of him.   Jensen was busy getting Grandad to pull the bones out of the fish so he could see how fishes were put together.  There I was, showing Jensen how to take the little fish bones from the corner of his mouth and put them on his plate – ready for when he’s dating [around his 50th birthday, I suggested] and there he was, trying to figure out which way up the fish skeleton went.  Eww.  So with that lovely thought in your head [there’s a photo below], here’s my delicious Backyard BBQ dinner first, to prepare you. 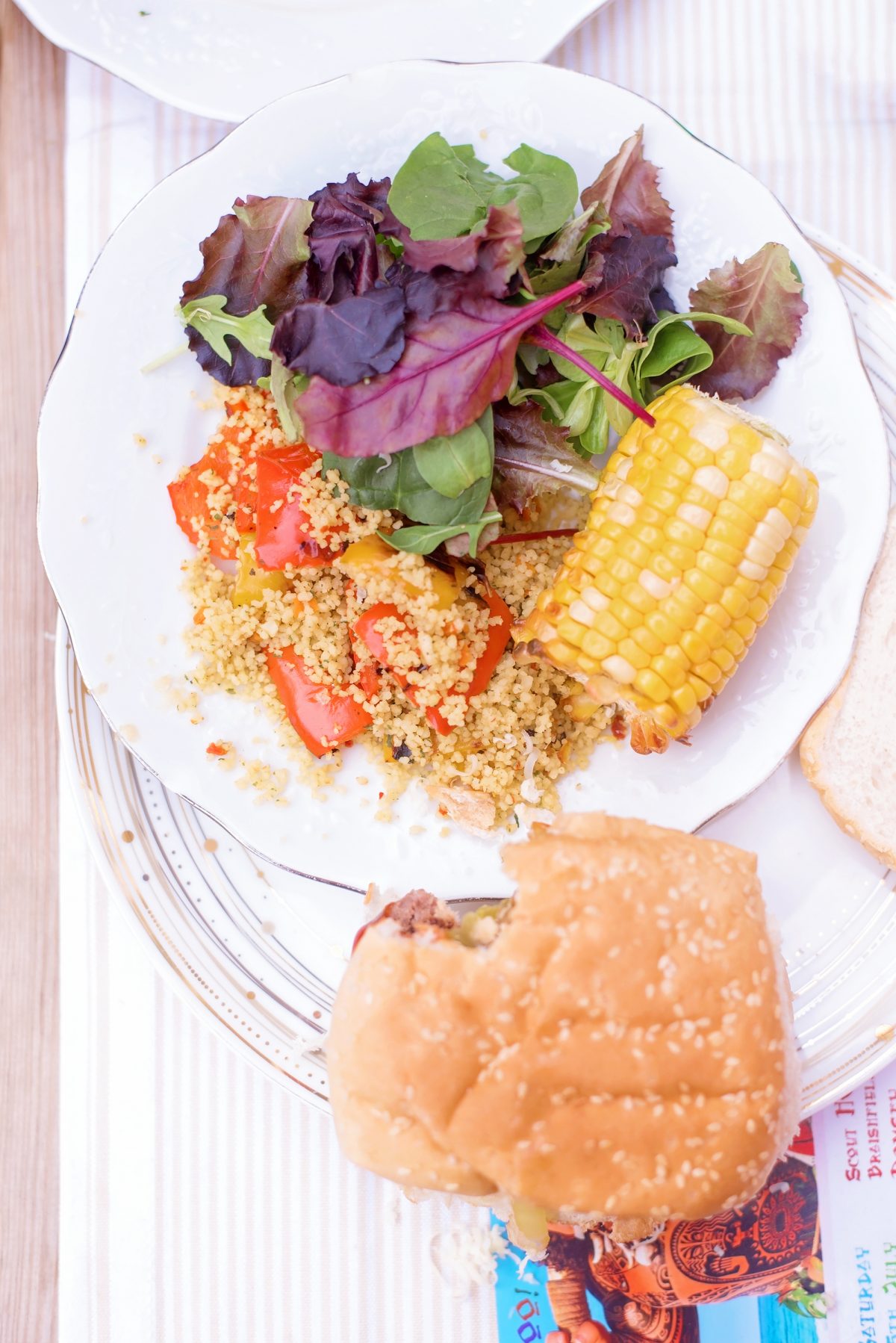 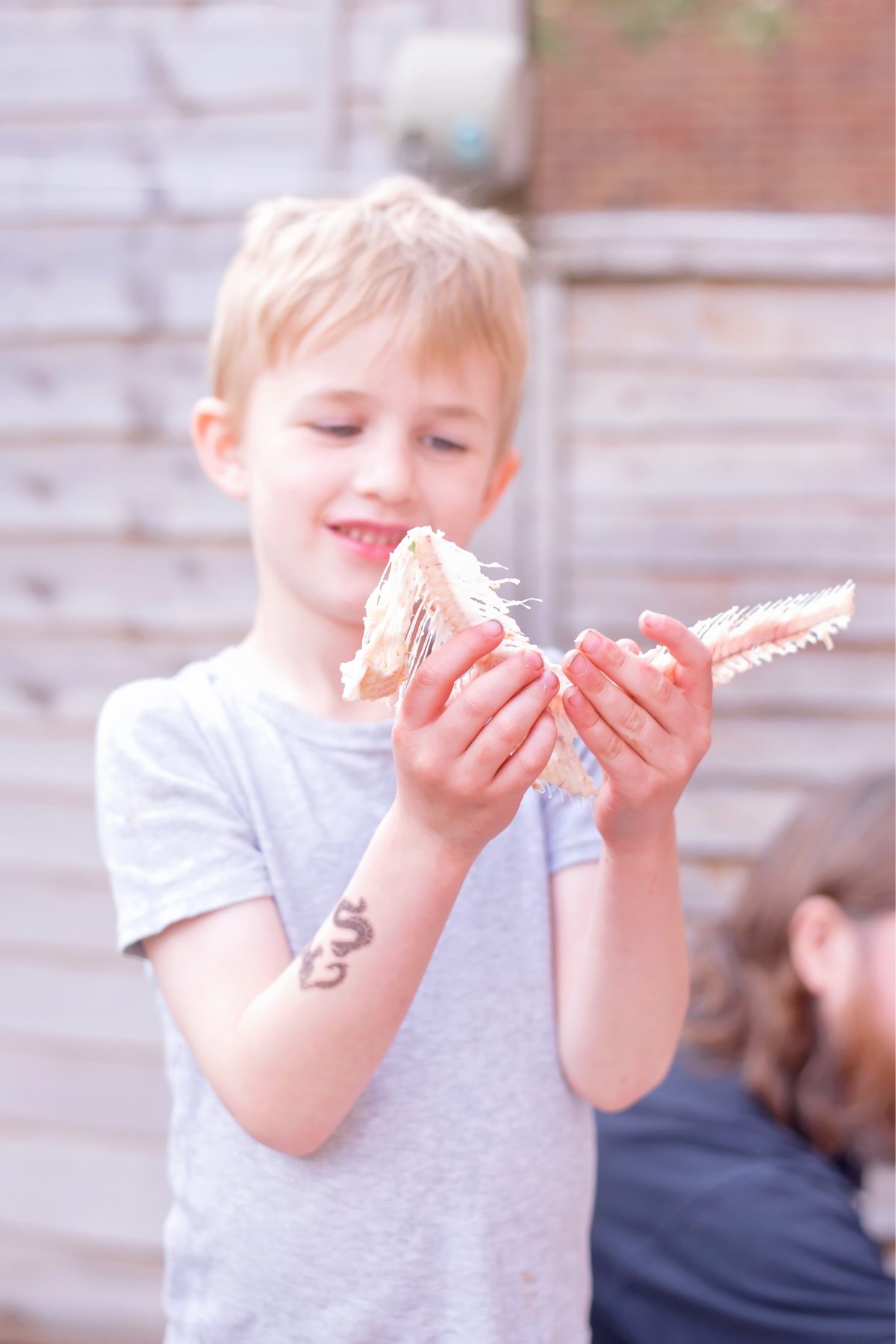 Boys.  Haha.  You’ve got to love them, fish bones and all!

And there we were, first Backyard BBQ celebrated for the year – but how is it Monday already?!  Here’s to sunnier weekends ahead – and blue skies for the school runs during the week!