When I’d learned to read properly – and by properly I mean for the love of it, rather than because I was told to, the very first series I picked up and was immediately swept away by was Enid Blyton’s Famous Five.  Tales of adventures on Kirrin Island and mysteries galore, and I was hooked.  I collected as many as Enid Blyton had published by the time I moved onto stories that made me want to hide under the covers like those by Thomas Harris and others that made me want to get to law school as fast as I could like the courtroom battles of John Grisham. Corfe Castle.

What was special about the Famous Five books wasn’t just the escapism, it was that I loved the characters just for who they were, not because I saw myself as any of them, which is so often the case when I find stories that I love and identify with.  I don’t even remember which of the Five was my favourite, but I do know that when we were at the seaside as children, me and my sister renamed my mom and dad as Aunt Fanny and Uncle Quentin, which still makes them laugh to this day.  There was nothing quite like yelling their given names across the campsite and watching other parents snickering.

We were invited this weekend to visit the original inspiration for The Famous Five’s Kirrin Castle – or rather, George’s Kirrin Castle – at Corfe Castle, as part of Dorset’s Literacy Month.  Our whole family loves visiting castles [hence our ambassadorship with Warwick Castle this year] and as I had absolutely no idea as to the relationship between Kirrin and Corfe, we packed up on Friday and headed to explore the ruins of what is now a National Trust property. 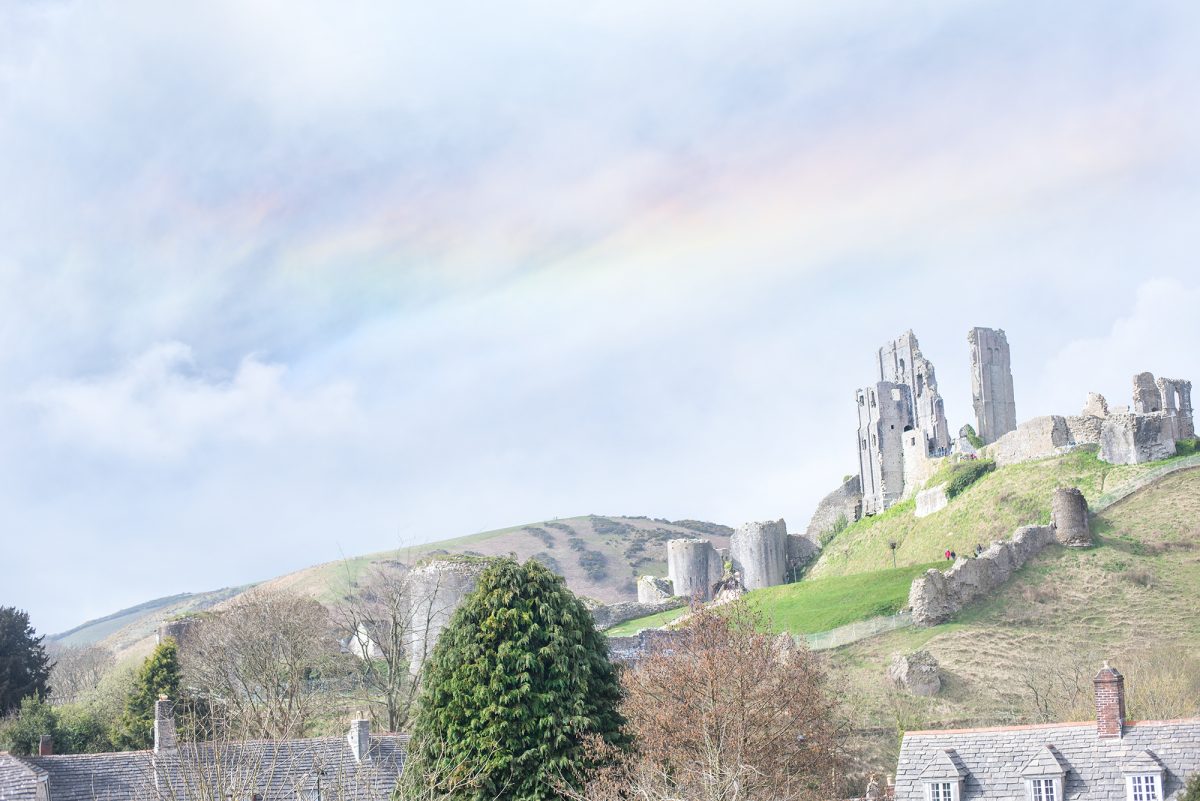 We arrived by 11am, and parked at the base of the castle’s hill.  The entrance to Corfe Castle itself is hidden well, across the road from the car park, over a river’s bridge and up a pretty steep hill – but it was so worth it.  If I was to pick a castle that would serve me well against attacks, Corfe would be the one.  High up on a chalk mound hill, it’s perfect and has the most amazing [and terrifying] views.

On the walk to the castle entrance, there are special signposts with double sided information placards to read about what you’ll see surrounding the castle grounds.  I decided to make everyone stand for a family shot before we started climbing the hill.  Gasping for air isn’t a good look in photos – and I know, after being photographed for a newspaper, red faced and puffing after pushing Jensen in the Baby Jogger for a race when he was just a baby. Haha. So attractive.

Once we’d made our way to the top, paid our entrance and dragged Grandad past the windows of the quaint Corfe Castle tea shop, we made sure everyone was still in one piece and headed into the grounds across the big stone bridge. Then I had to run all the way back around to the hill to get a photo of everyone on the crossing.

We were warmly invited into the castle grounds by the National Trust staff and we chatted with them for a little while about Corfe Castle’s history.

We learned that whereas there has been a castle on this mound since 900AD, the oldest surviving parts that we were visiting today dated back the 11th century and were built by William the Conqueror just after 1066.

Corfe Castle was also a home to King John [we have King John’s house here in Romsey, and we love any connection to the legend of Robin Hood], a prison – which my boys guessed correctly! – and a treasure store [which they also guessed, smarty pants boys.]  How the castle came to be in quite such a ruinous state is quite sad really – it was sold by Elizabeth I, to her Chancellor, and over the years subject to attack whilst owners were away, and then finally abandoned.  The villagers took parts of the masonry and such to supplement their own homes.  It actually makes my heart hurt a little that the castle was picked apart. That said, although the castle is purely ruins, they are intricate and plentiful – and in truth, that’s more exciting to me than a perfectly maintained castle.  Ruins hold so much more history – and I’ve never been to a castle that I’ve loved as much as Corfe [but don’t tell the other castles].  Maybe that’s the connection to the stories I loved so much as a child, and maybe it’s the history, but there’s something very, very special about Corfe that endeared me to it – and will bring me back to visit again and again.

Anyhow, around the castle is a quest for little ones – each shield has a question printed on it and if you complete them all, there’s a prize of a blue Corfe Castle wristband at the exit.  The boys were all excited to get started and headed off up the [next] hill to find shield number one.  I was thrilled to bits to see a huge part of my childhood come to life.

Just inside the entrance sat a set of stocks.  The boys are tall enough not to need help any longer, which must mean that they’re old enough to be held accountable for being naughty on castle property if you ask me.  Hero was a little too short but that didn’t stop him having a go! I kept telling the boys to leave me for a few minutes in different parts of the ruins, because I was so desperate to imagine the Five, camping out and exploring the castle.  I searched for places that they might sleep, places that the incoming intruders to Kirrin might hide – and the boys tried very hard to decide just where they could create a jail for the naughty people. 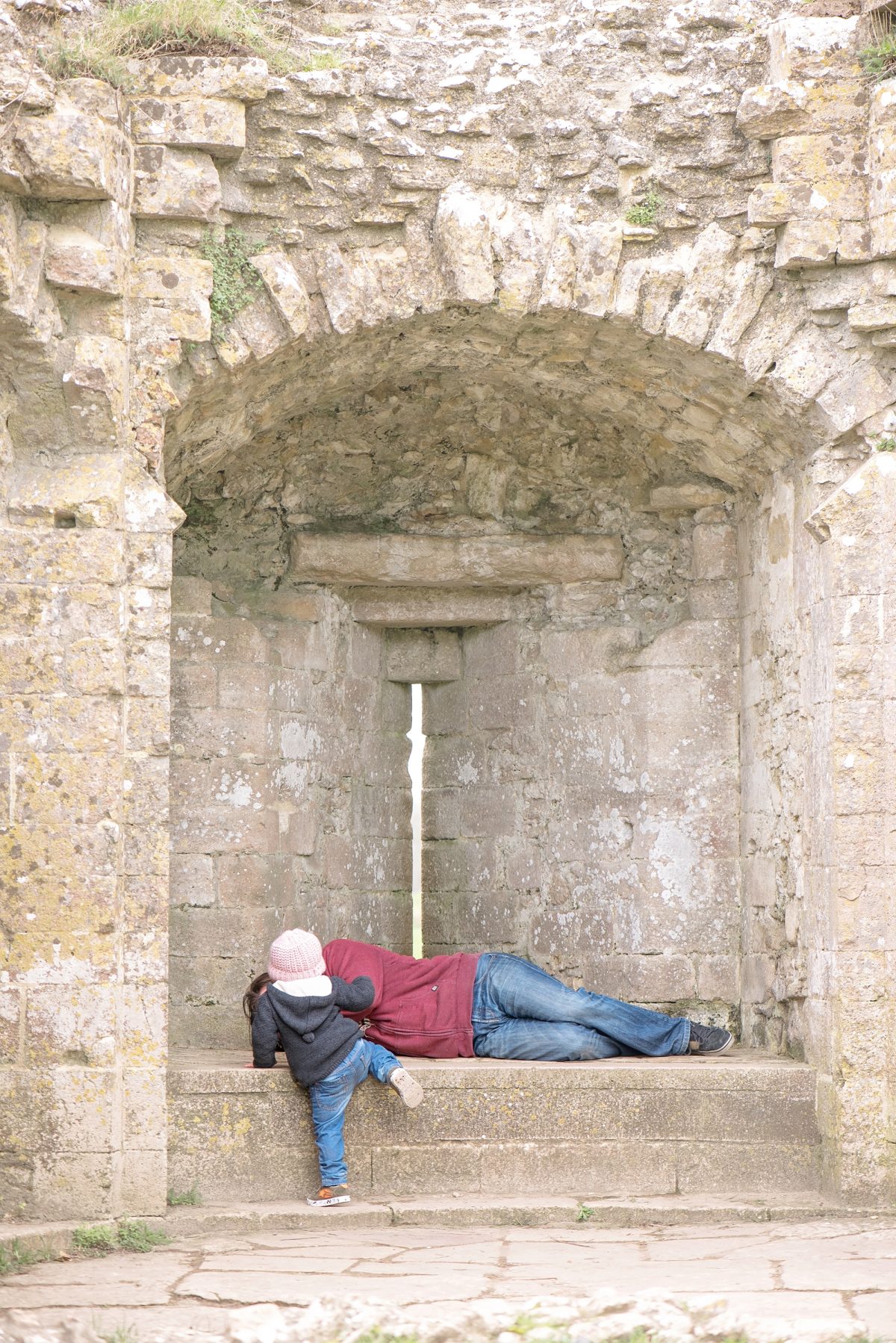 It was so windy up on the top of the hill and there were so many little nooks and hiding places that I wished I had been able to play there when I was young.  It’s the kind of place you dream of to play make believe, and not hard at all to see why it was the inspiration behind Kirrin Castle.  It’s just perfect.

The climb up to the castle peak is SO steep that our car looked like a little dot below us, which you can see in our photos on Facebook [we put the rest of our photos on there otherwise you’d be scrolling through 70 Castle shots of us all].  Heights not being my greatest love in life, I found myself saying “not too close!!!” to every railing or wall we met. We did like looking at the teeny sheep though which we saw every step of the way.

We never realised we lived so close to Corfe Castle, being in Hampshire, and so we’re hoping to come back and picnic ourselves in the Summer holidays.  It was really lovely having the castle nearly to ourselves though, thanks to visiting on a Friday!

Thanks to the little signposts dotted along the pathway to the castle, we’d also learned that the four legged farm friends surrounding the castle are no ordinary wooly jumpers!  The sheep we saw, which were so shaggy that I hated to admit that they did indeed look like walking sheepskin rugs, were light footed animals which don’t damage the castle.  They were so beautiful, and oblivious to all of us around them – although one of them was a little more dramatic with his posing than the others…he was my Wuthering Heights sheep. 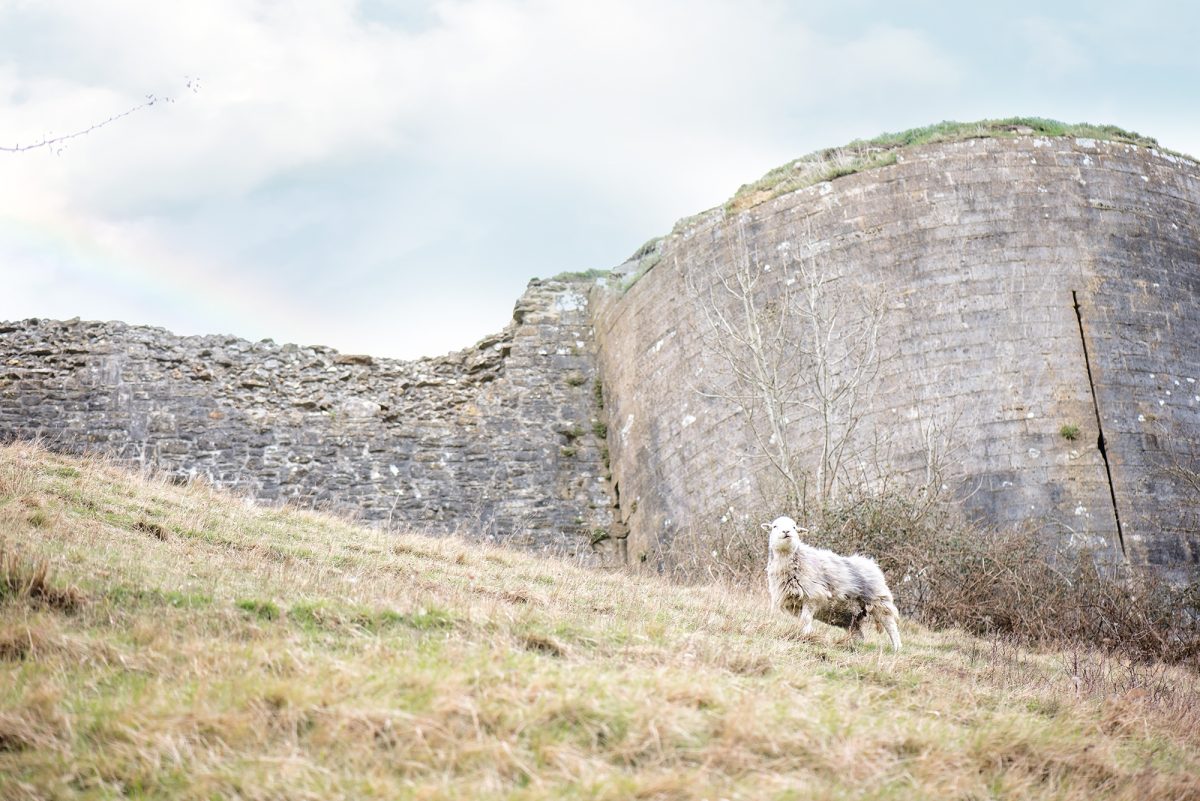 Here are a few more of my favourite photographs from our trip – there are more on our Facebook page. 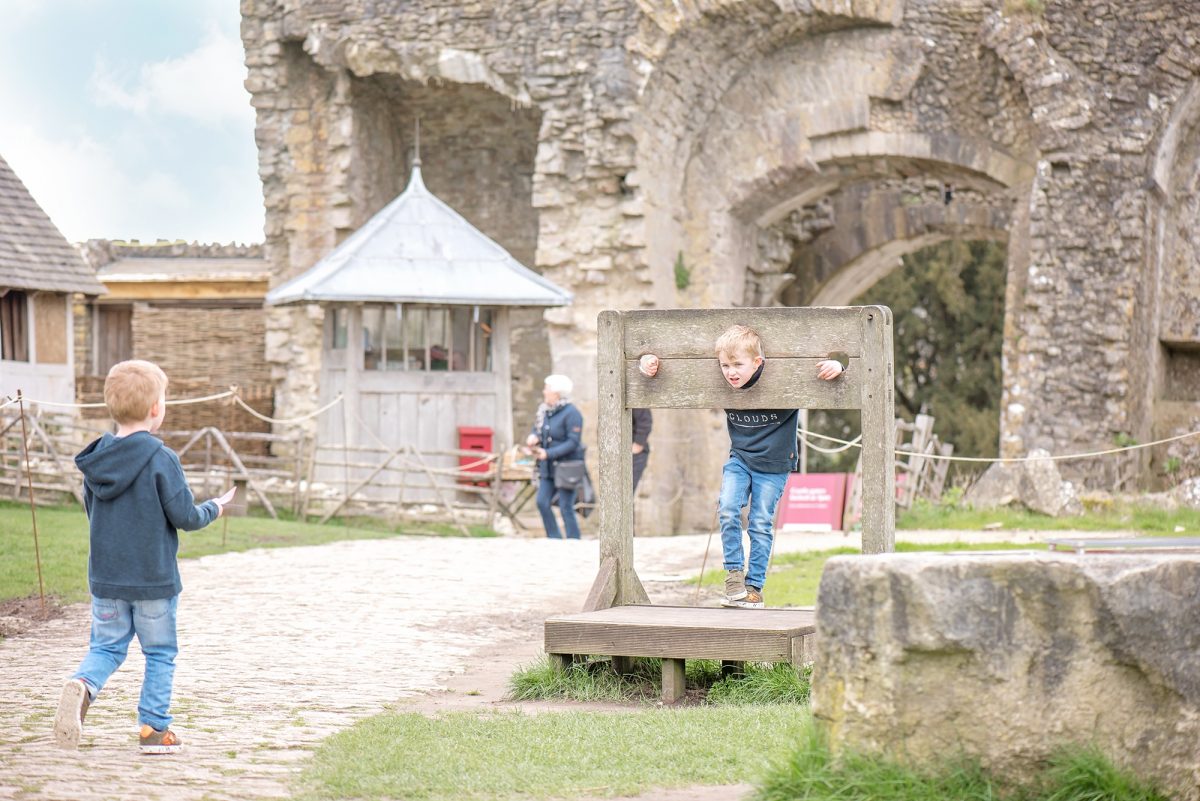 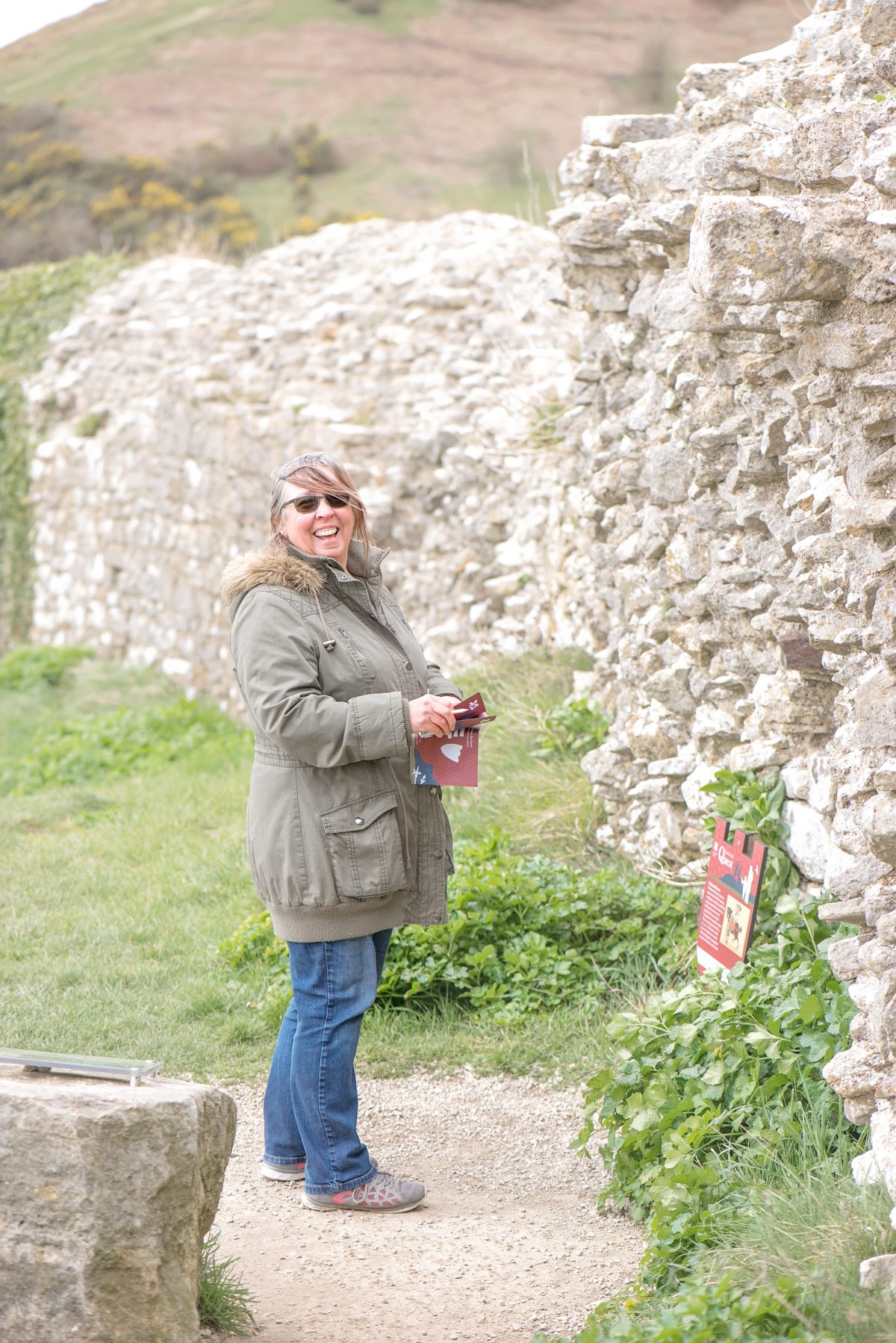 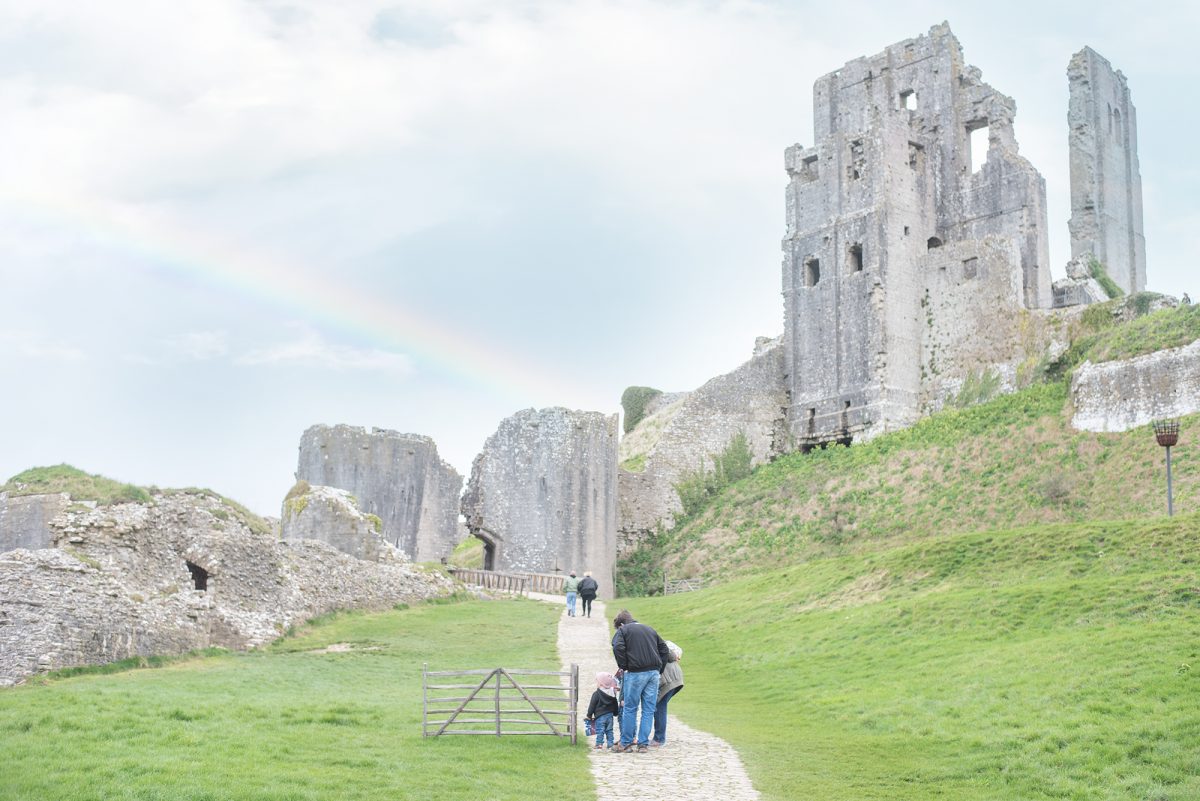 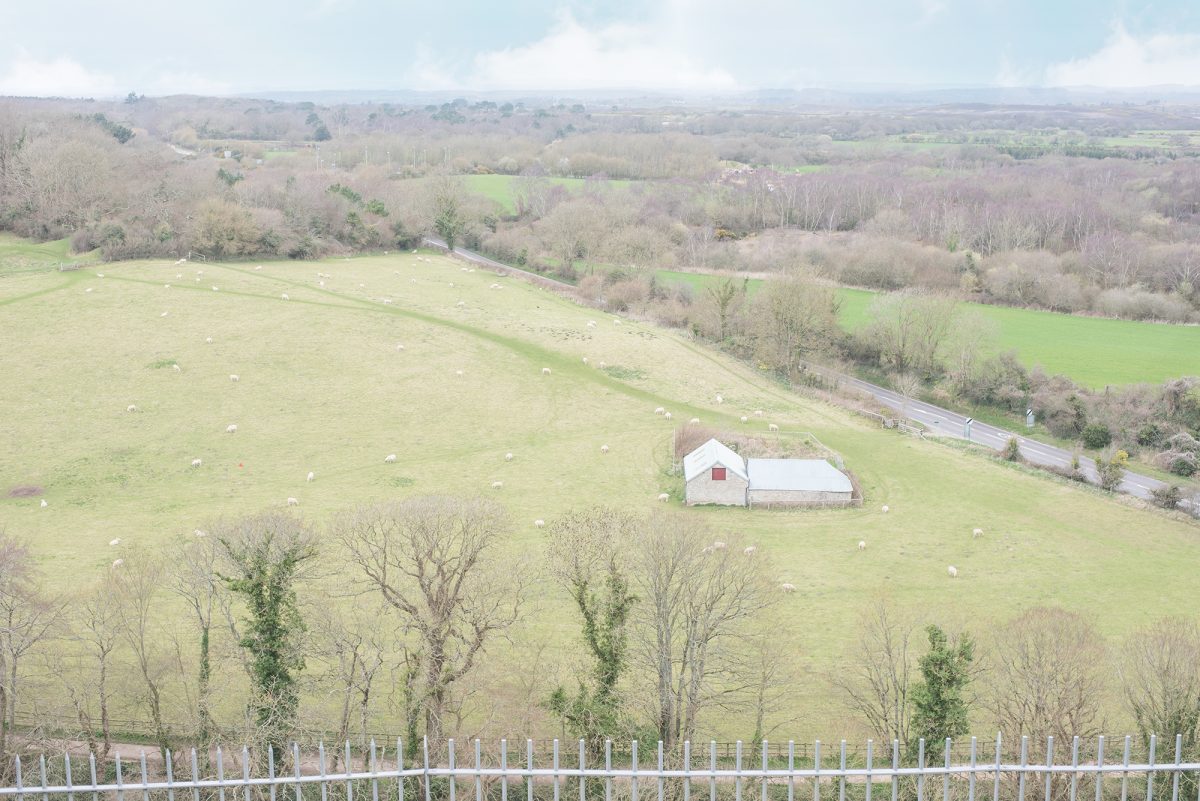 For the rest of our visit, we spent our time just exploring the ruins and the twists and turns of the castle.  It’s the most fun castle we’ve ever visited – low walls, dips, soft grass to sit on – the boys loved it.  It’s the perfect place to play make believe, no matter how old you are… 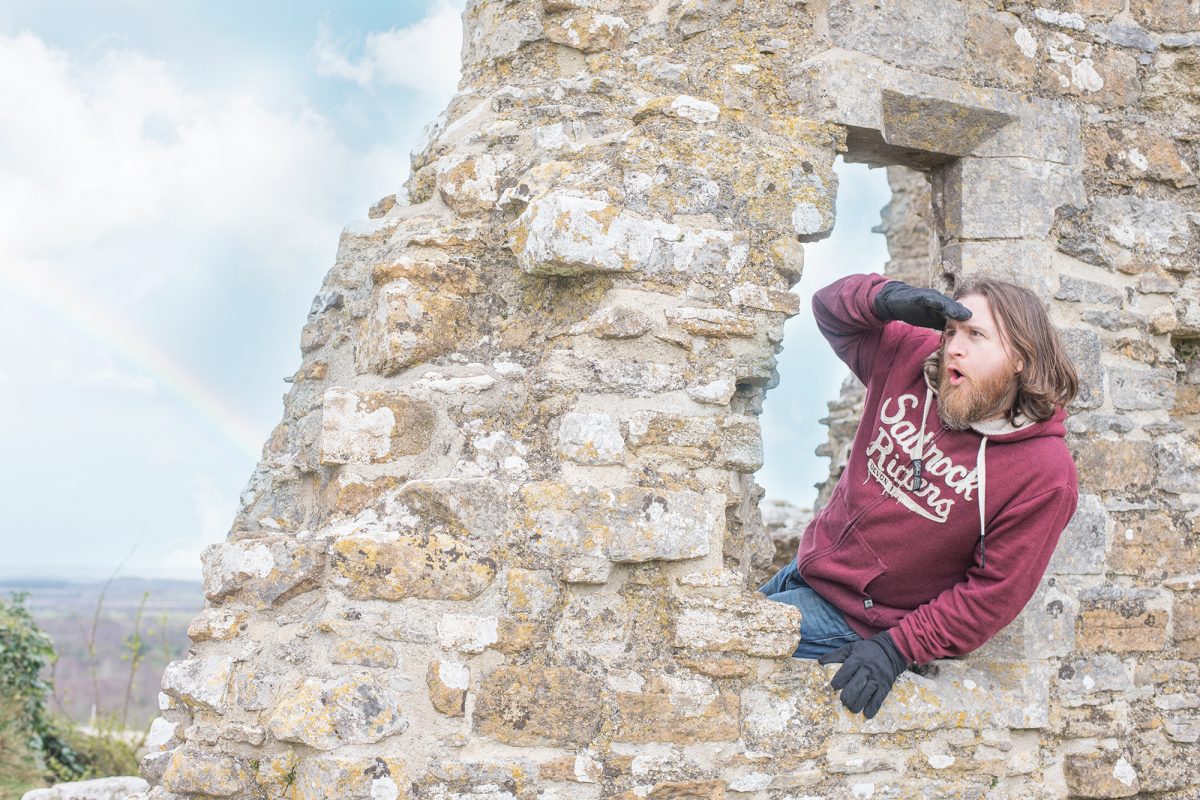 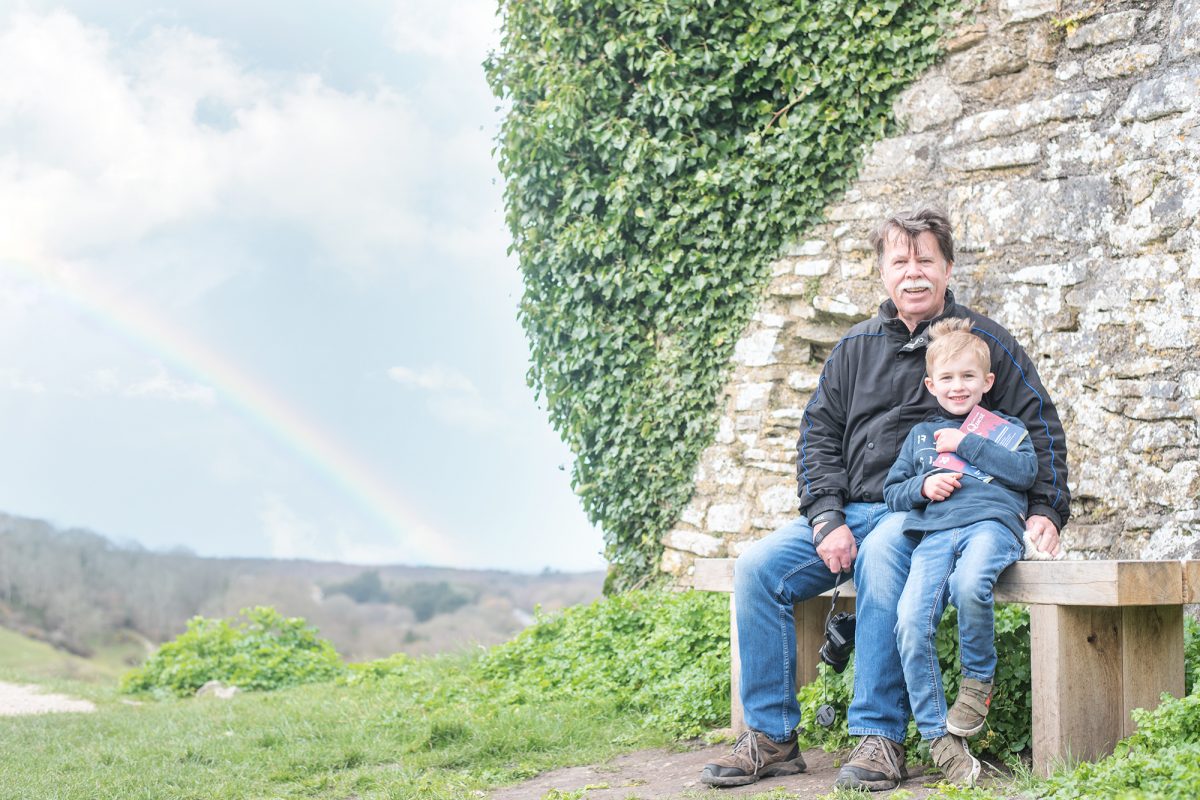 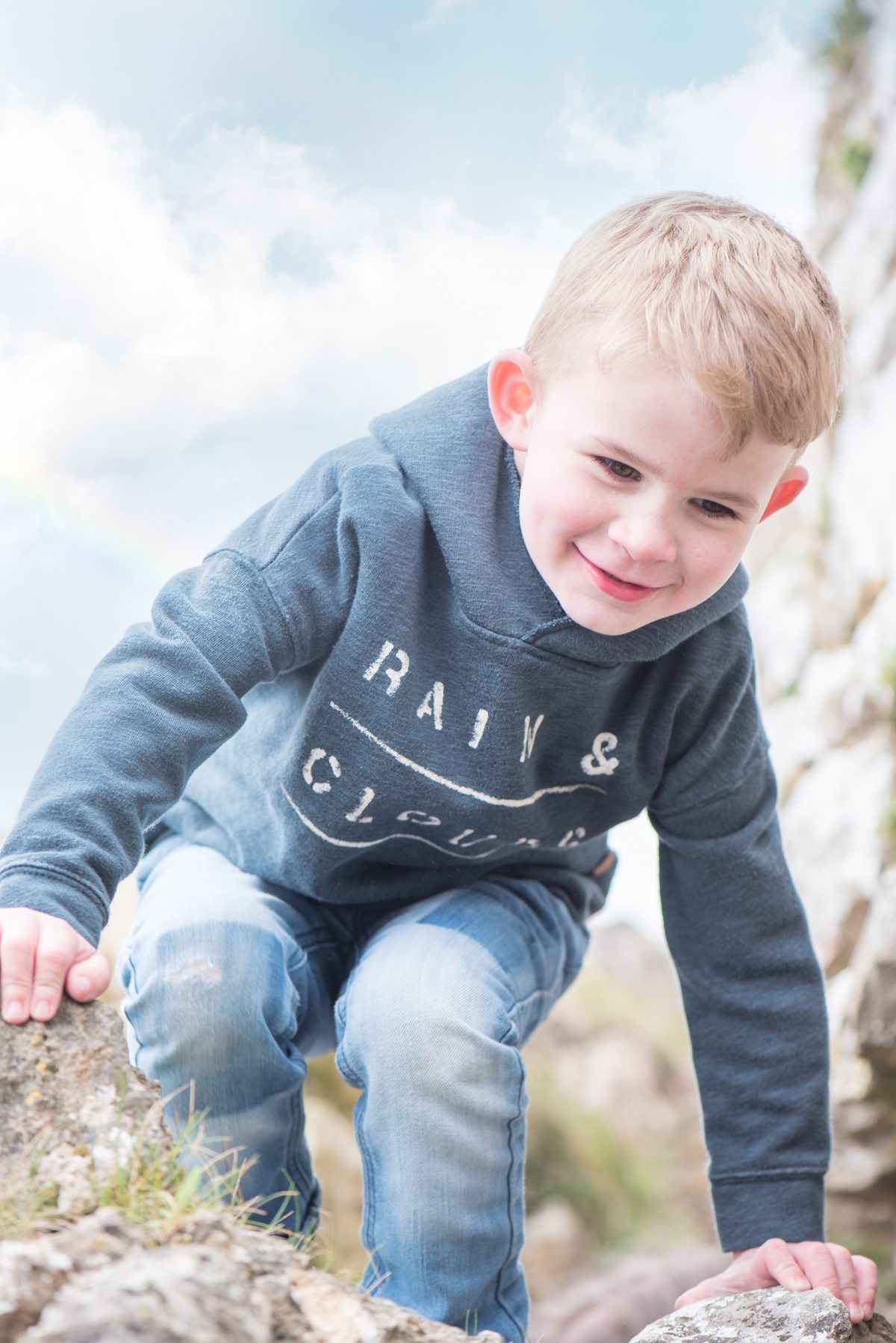 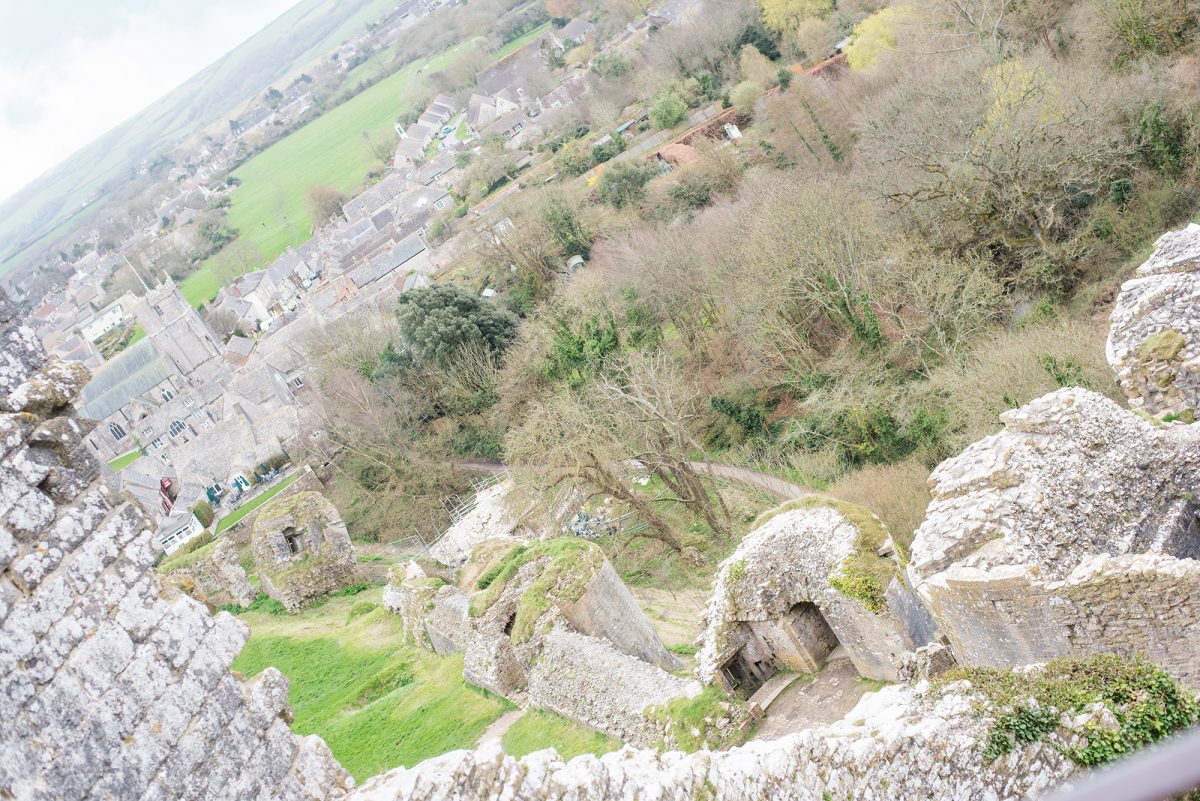 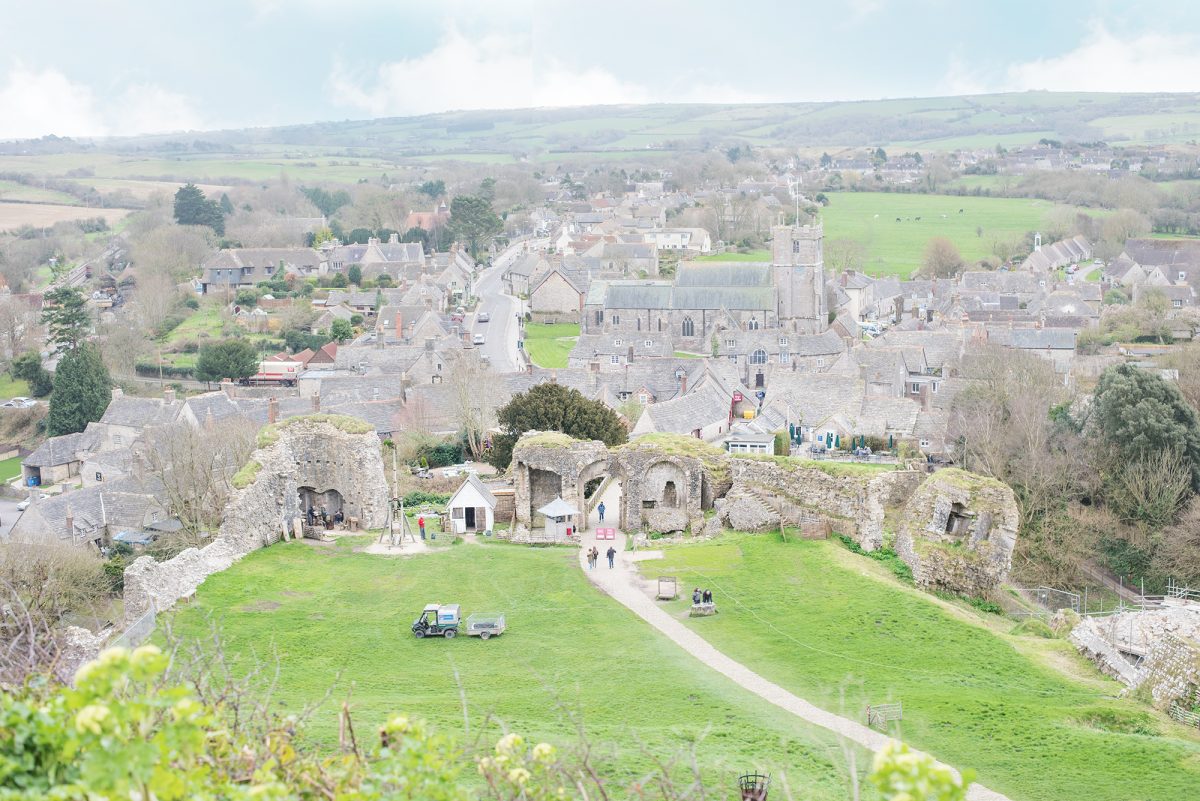 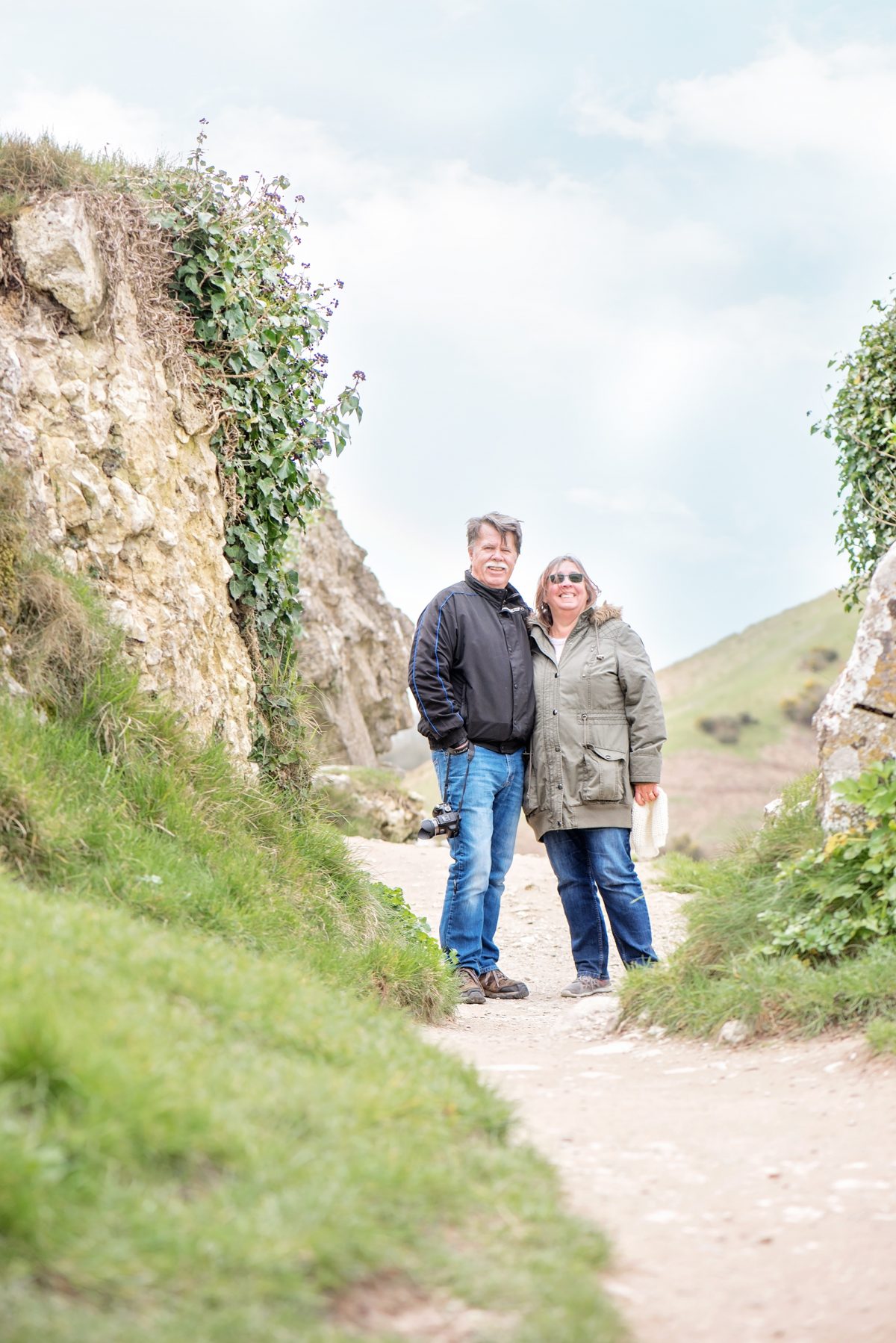 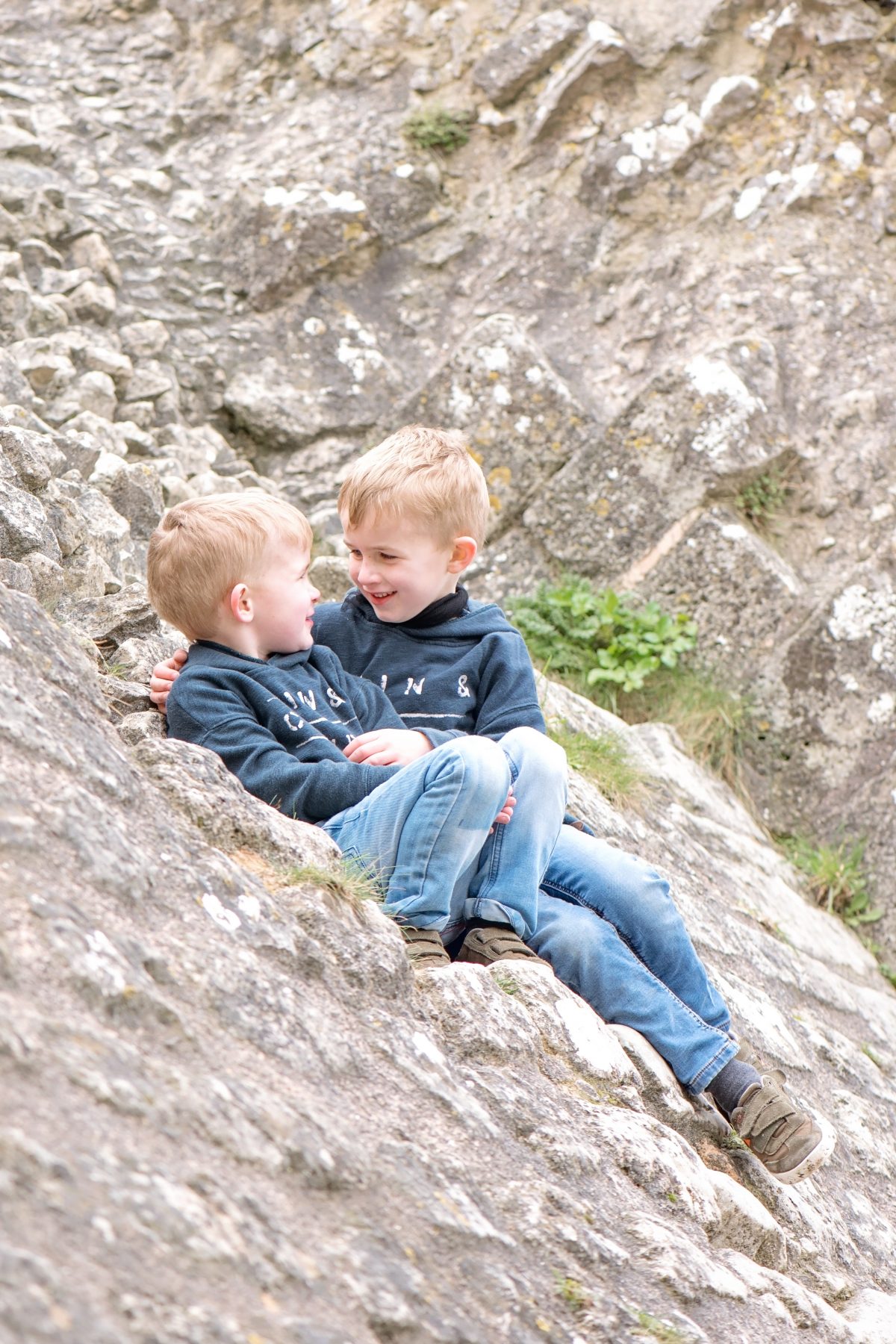 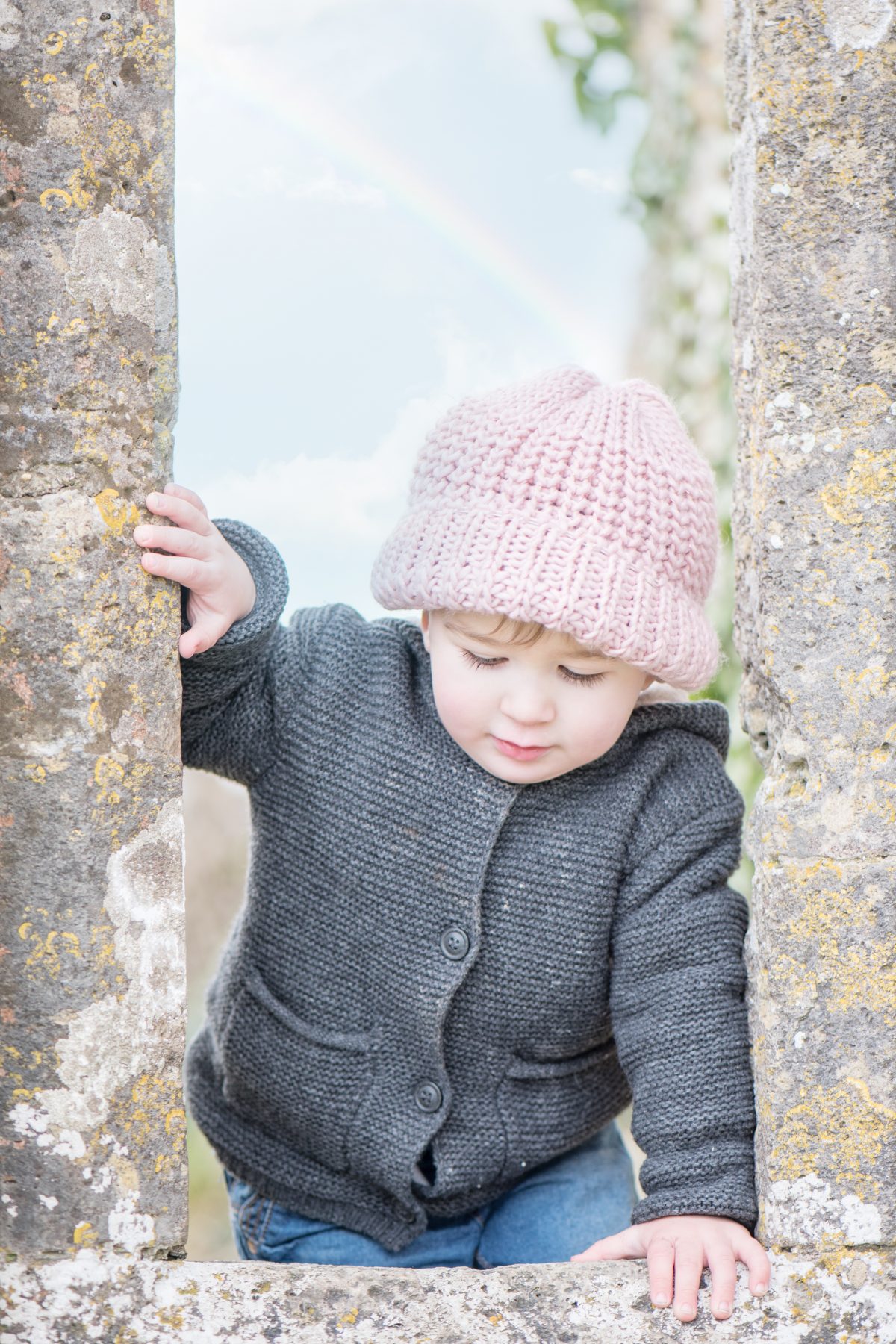 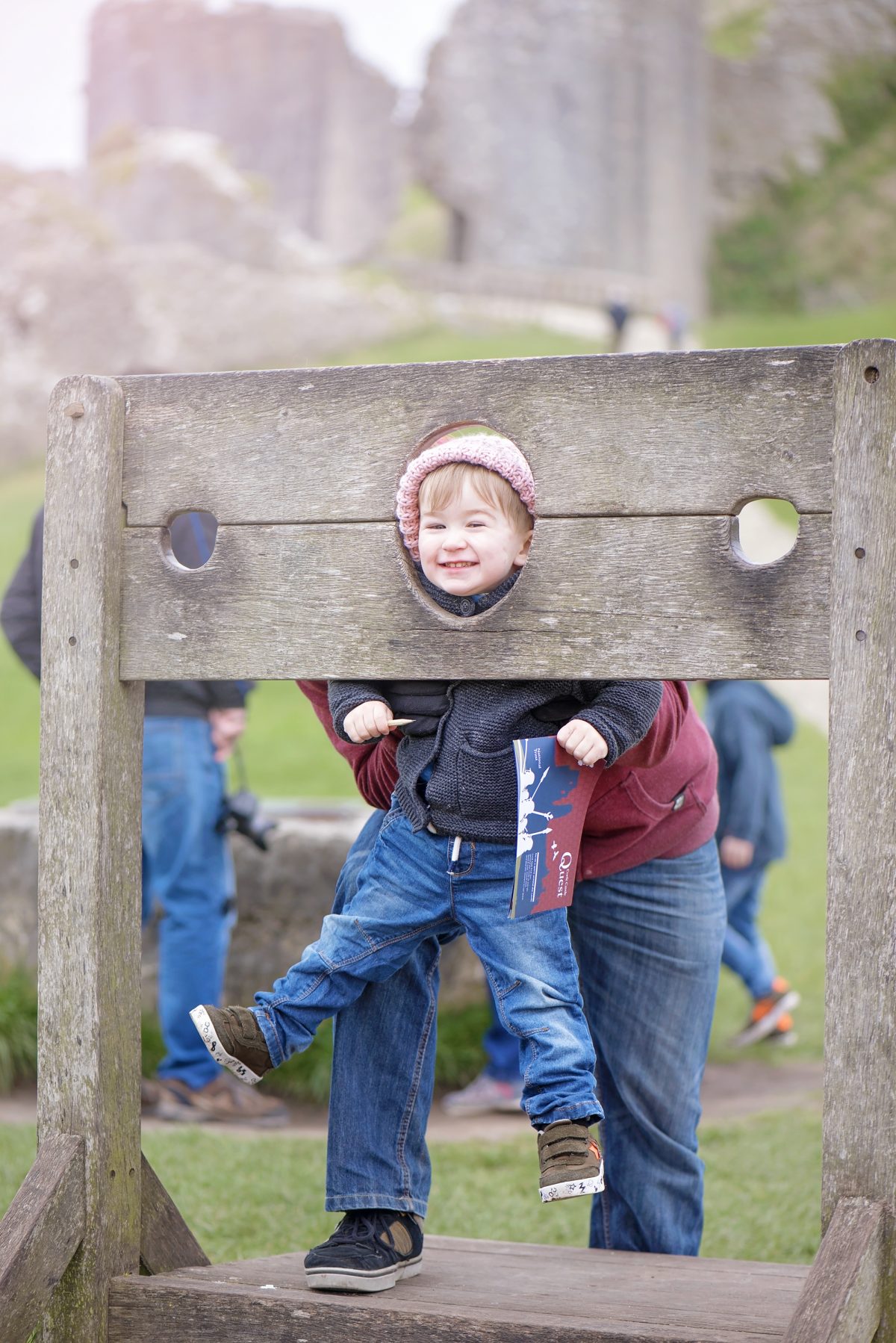 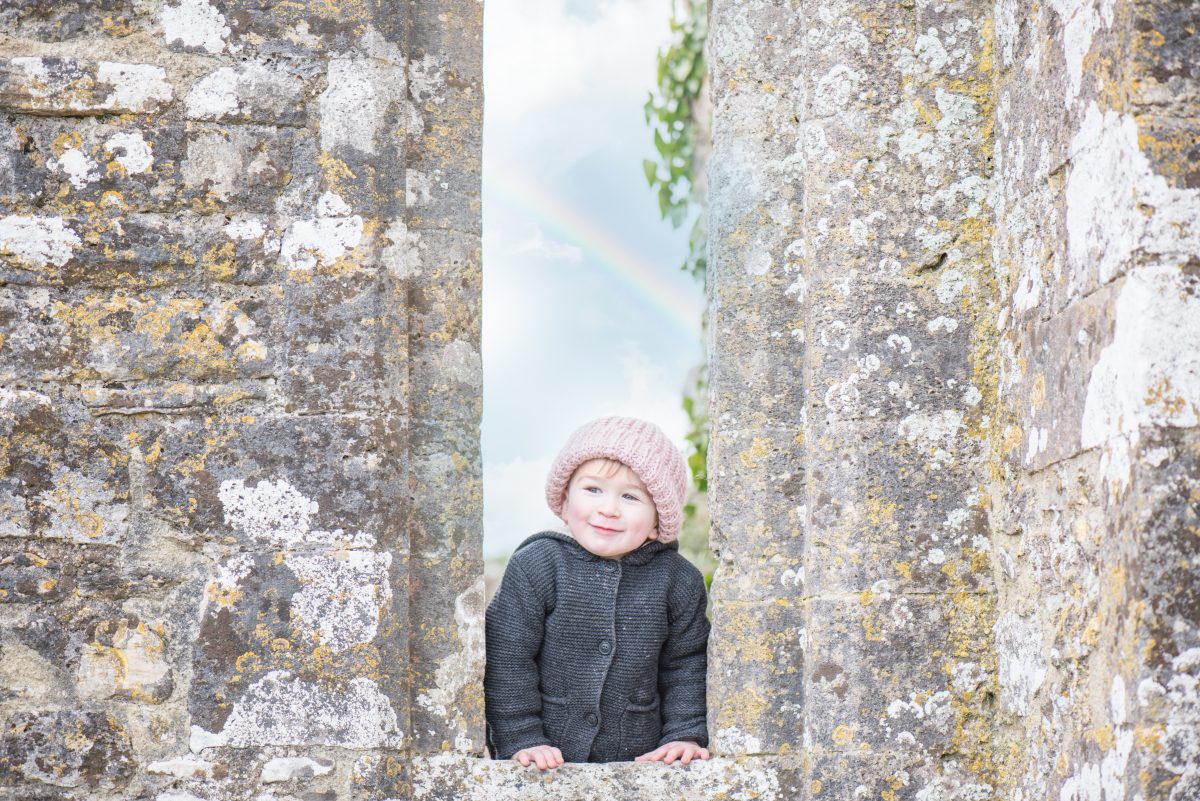 Apparently the castle was falling down and needed help.  It’s actually true – except our version of help wasn’t as effective as the work being done on the castle walls at the moment. 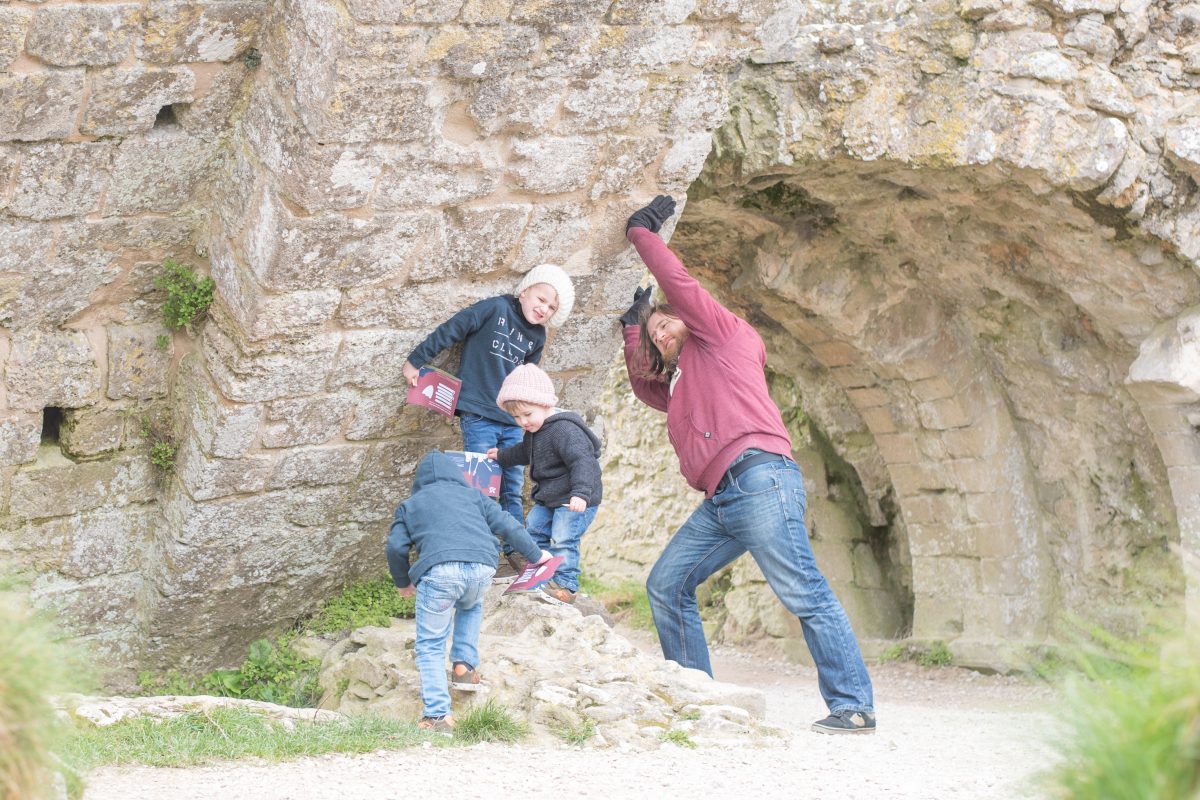 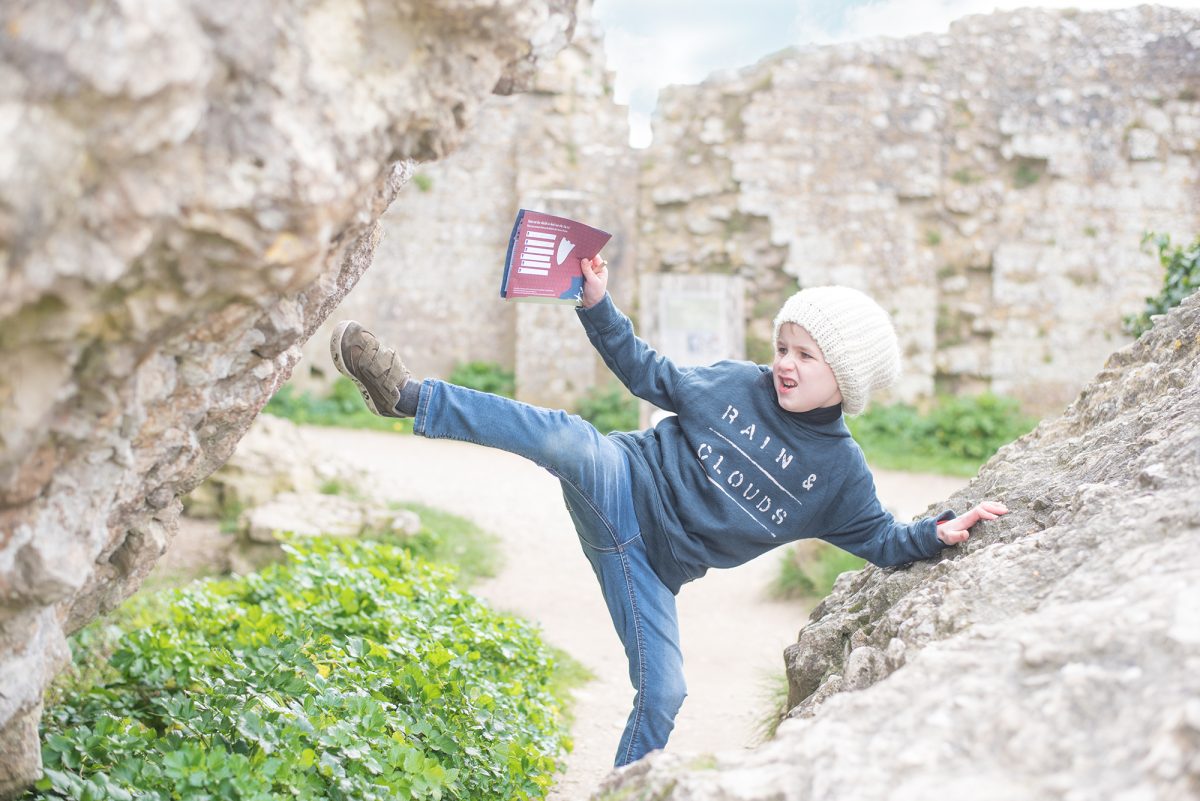 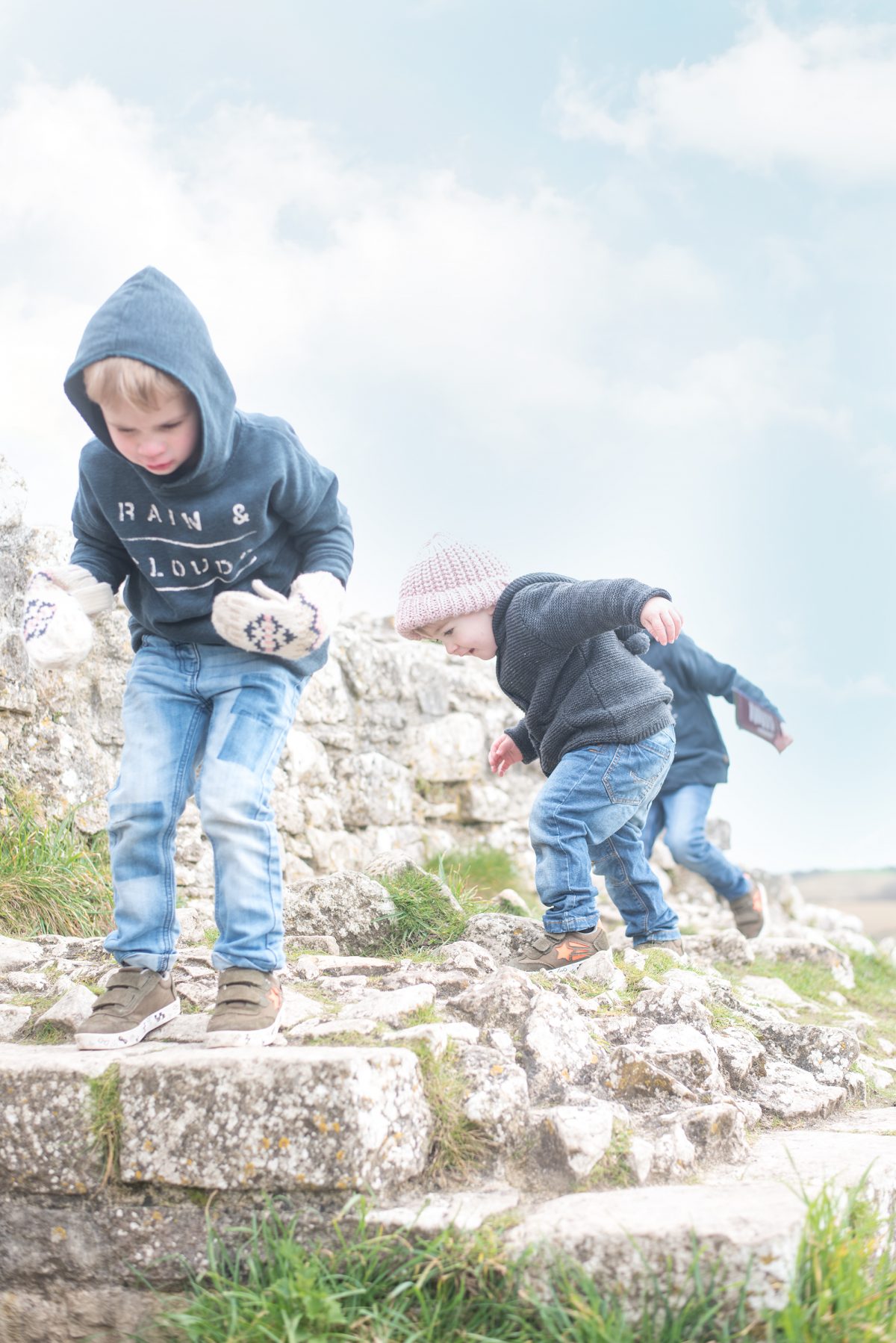 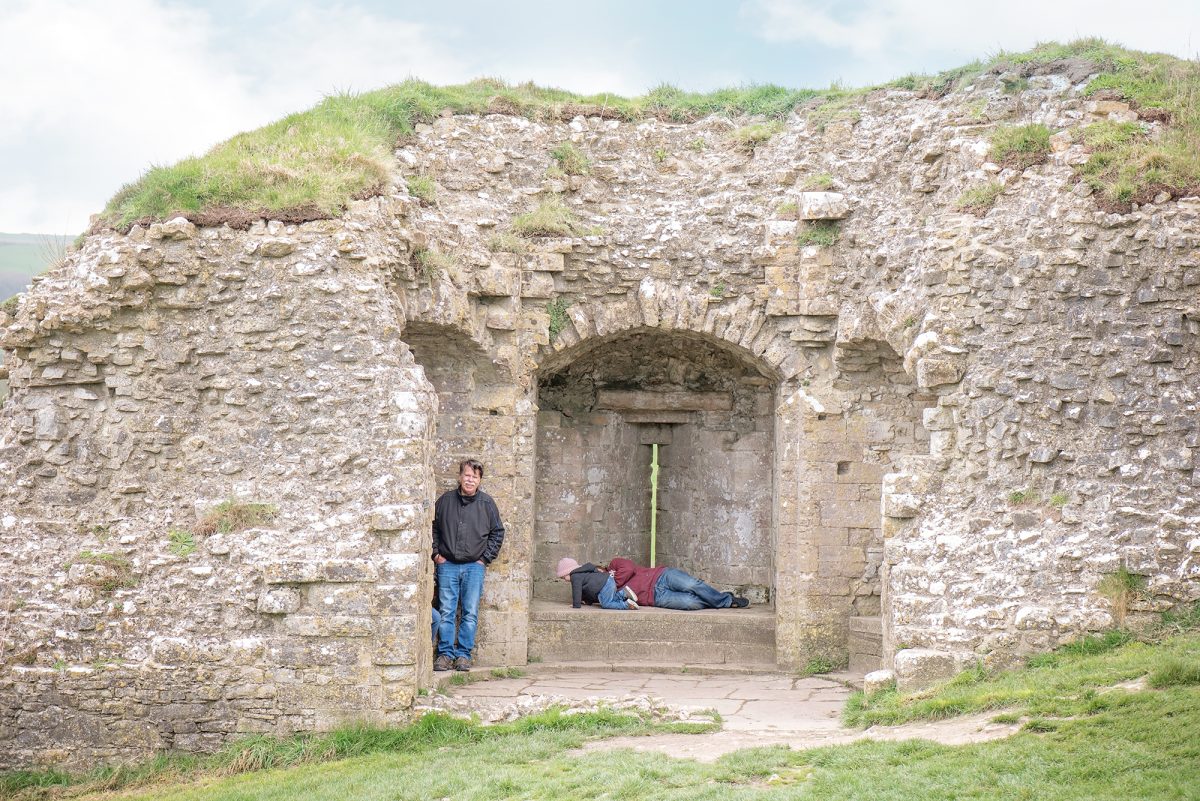 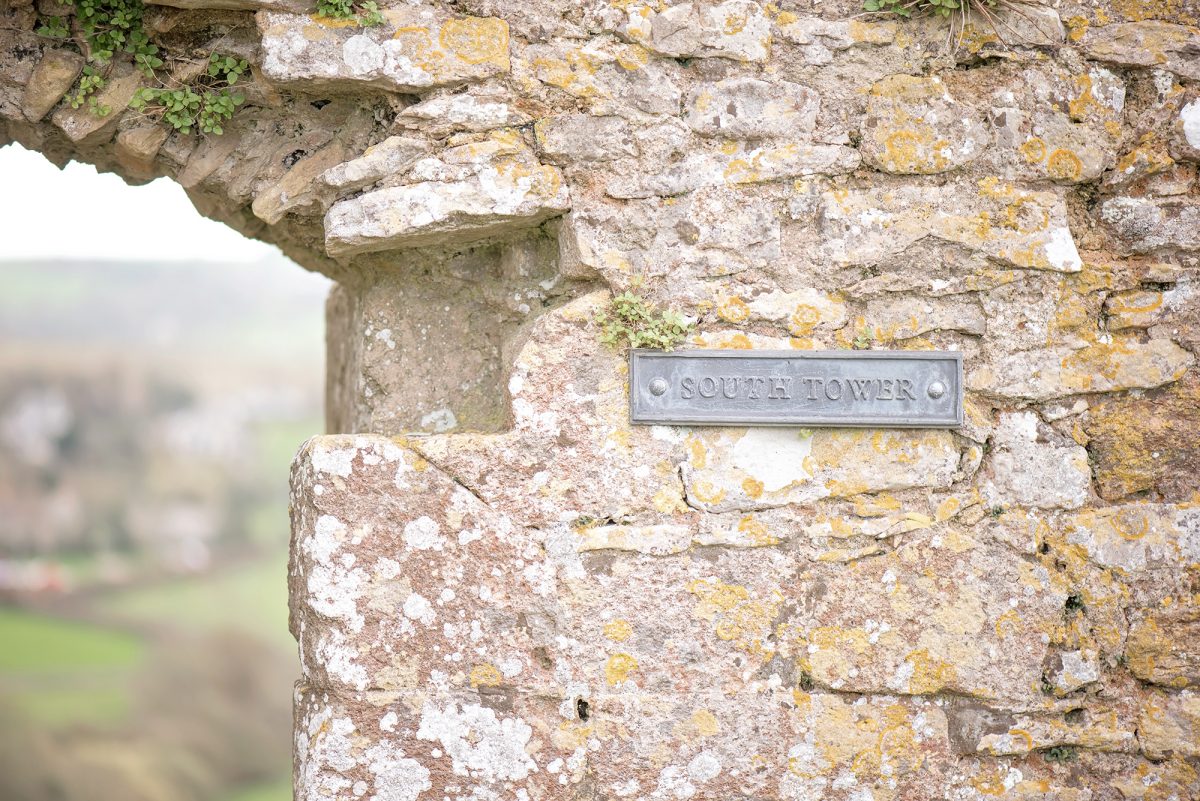 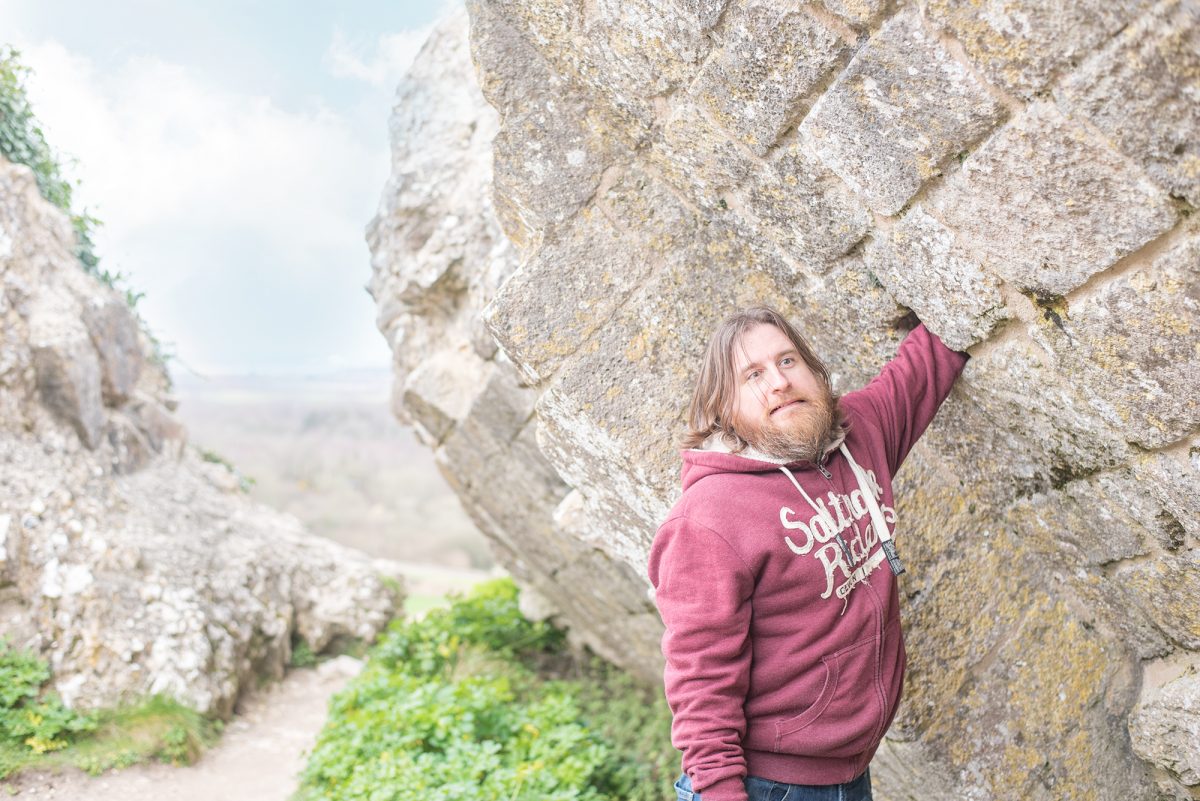 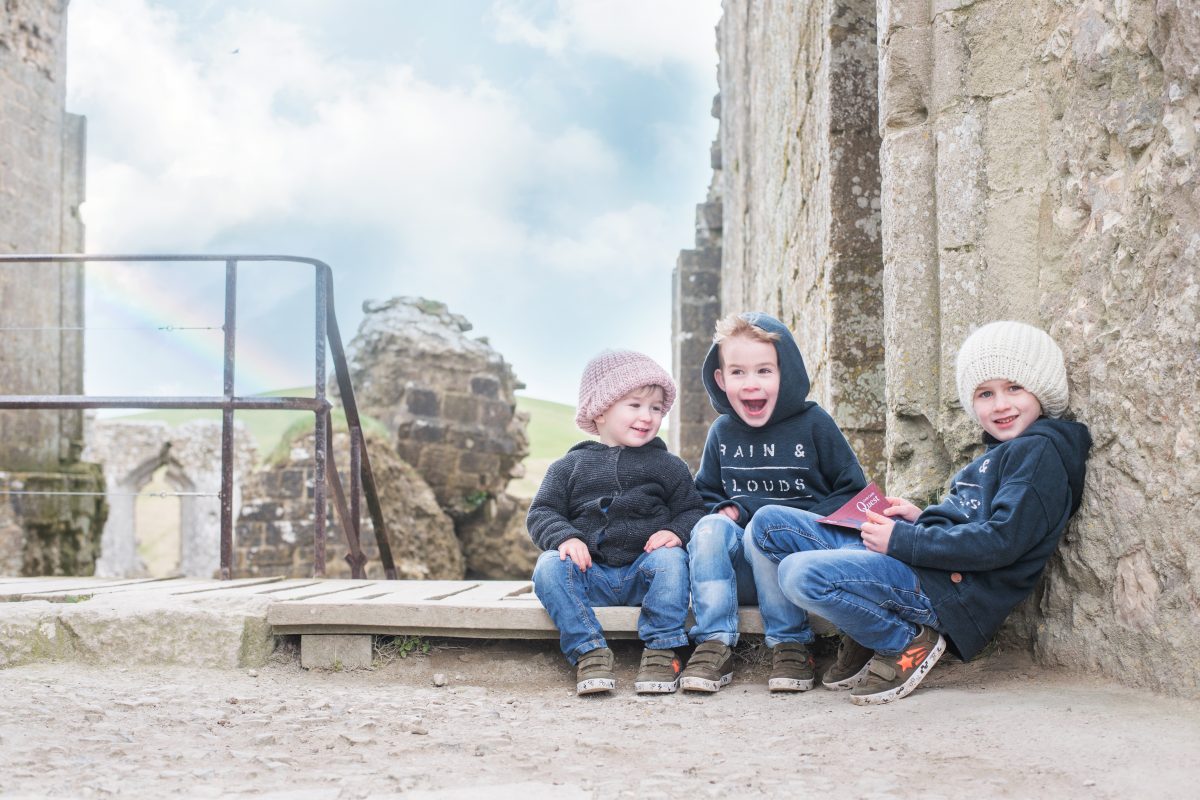 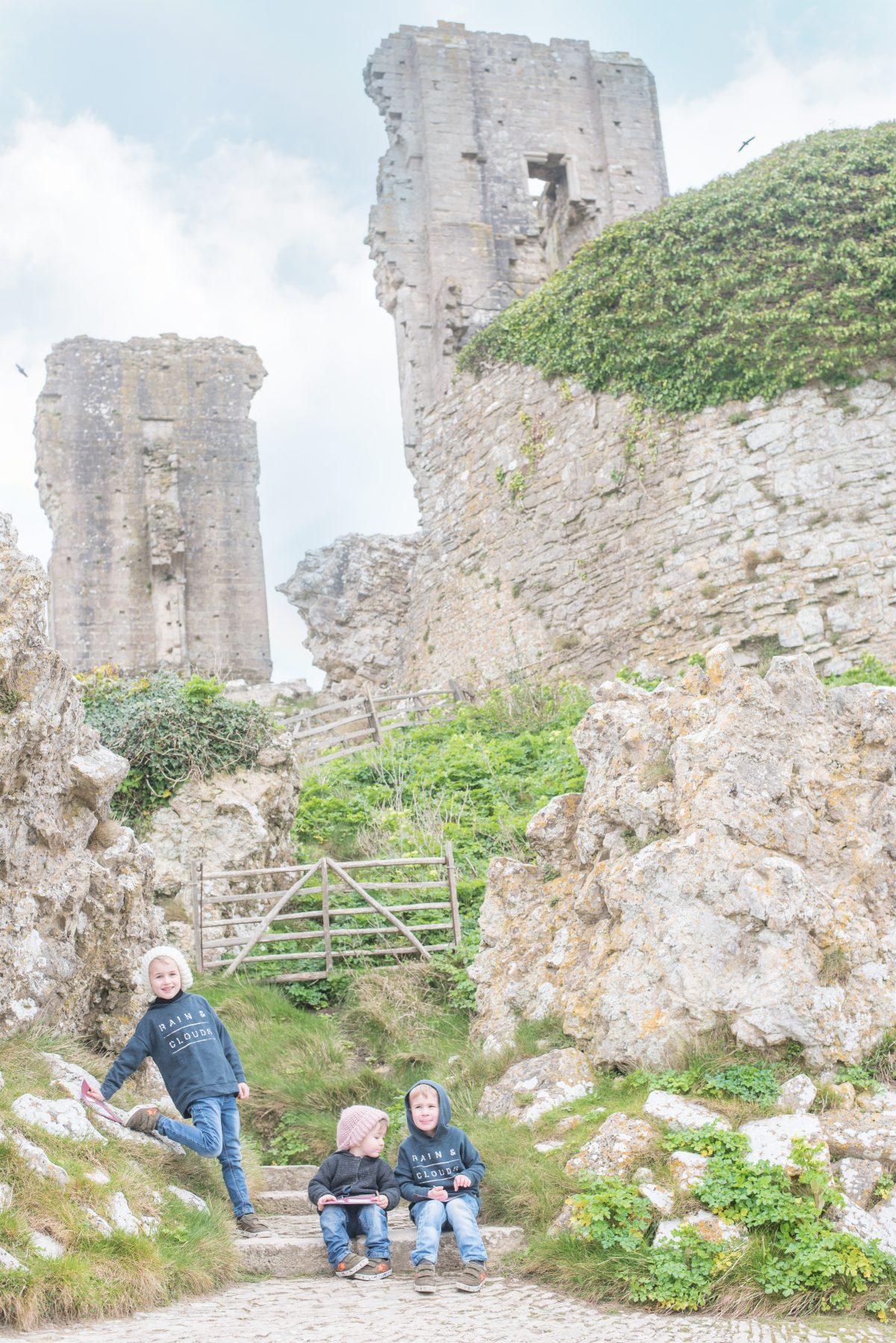 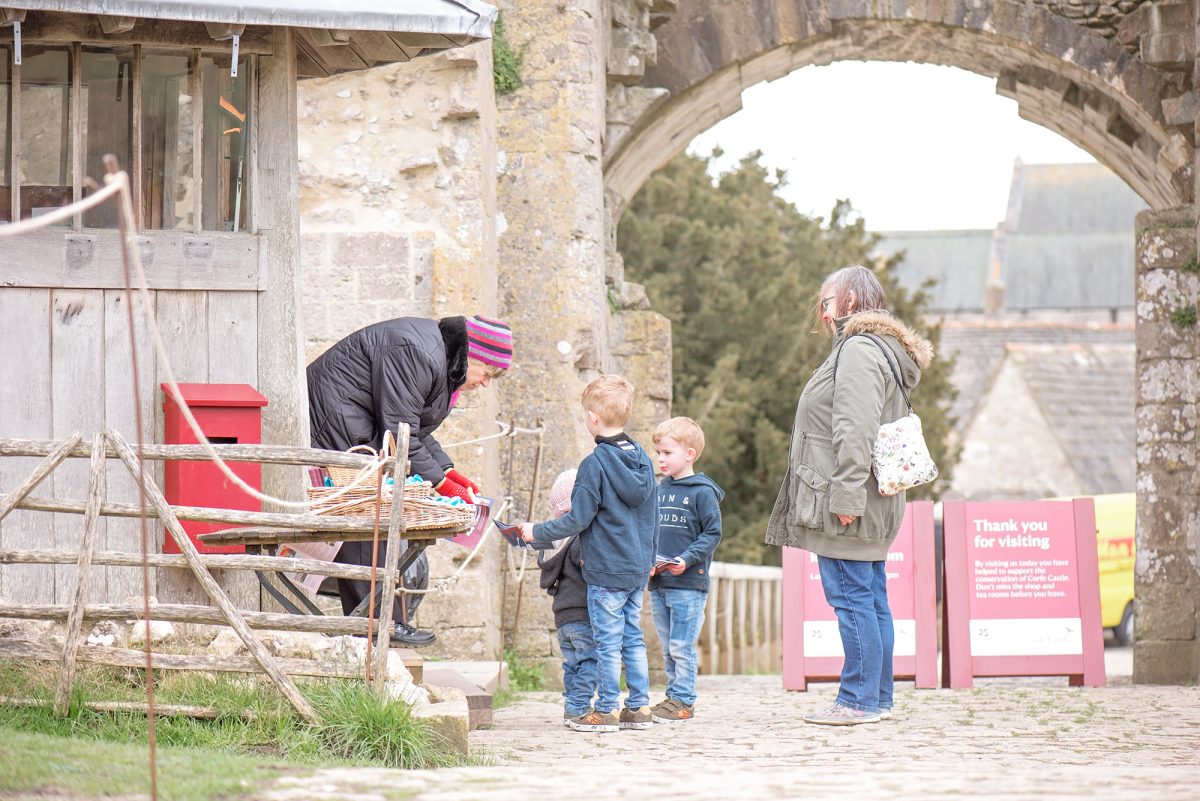 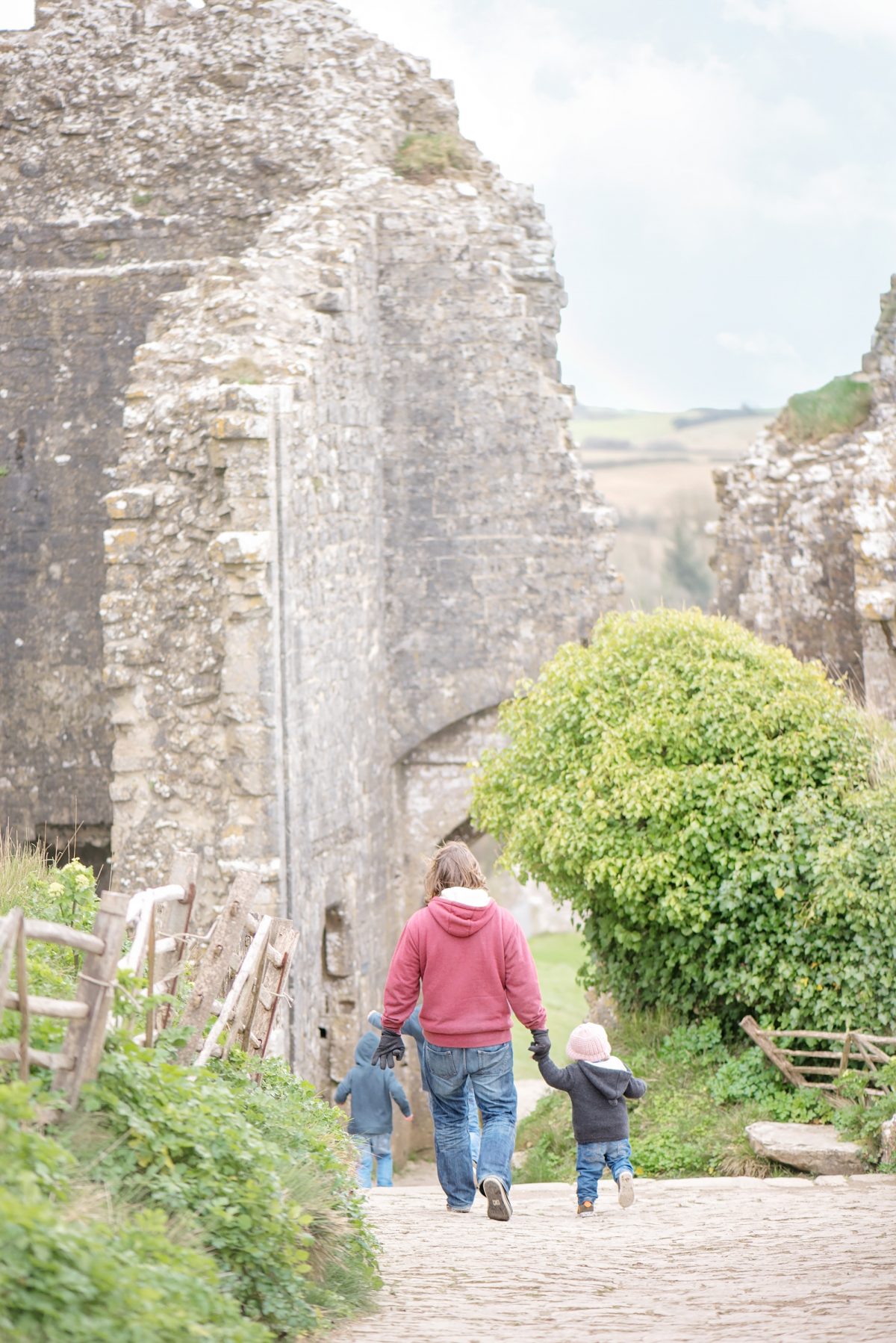 Quest completed, every hideout investigated and lots of memories made, we headed back down the hill to check how many questions we’d gotten right and to see if we could win a wristband!  Three successful quest papers handed in, finally we decided to call it a day – our cheeks were red and tummies rumbling.  Time for a cup of tea and some shortbread at the National Trust café!

A TRIP TO COLOGNE WITH CEWE AND SISTERMAG
« ST. GEORGE’S DAY INSPIRATION
SWANAGE RAILWAY: AN OLD FASHIONED TRIP TO THE SEASIDE »