SUBSCRIBE TO OUR NEWSLETTER FOR SIX SECRETS TO AN EGG-CEPTIONALLY FUN EASTERTIME AT HOME!
You are here: Home / DISNEY / TO THE PRIDELANDS’ END, LION GUARD DEFEND [TALKING KION PLUSH REVIEW]

When we stayed in Disney World a few years ago with the two bigger boys [and the smallest one just weeks into my pregnancy], we spent some of our time at the Art of Animation resort because of the theming.  Just outside our block stood a full sized statue of Simba, Timon and Pumba as they Hakuna Matata’d their way across the log over our heads, and a little further down sat Janja the hyena’s hideout in the Outlands.  Our boys loved it – and the Lion King became one of their favourite movies, until sparky little Kion burst onto the screens of Disney Junior in our house.  Now we’re all about Kion [Simba’s son], Bunga and friends as they defend the Pridelands against Janja [who has aged very well] and a myriad of other naughty creatures like Jackals.  Every episode plants a new catchy tune in our heads that I find myself singing on the school run. Talking Kion.

When Hero received his very own Talking Kion to review, he was ecstatic.  It was naptime within an hour of him arriving [school run time] and so Mommy had to tuck in Kion beside him in the stroller as we snoozed.  He’s been cuddled and adored ever since. 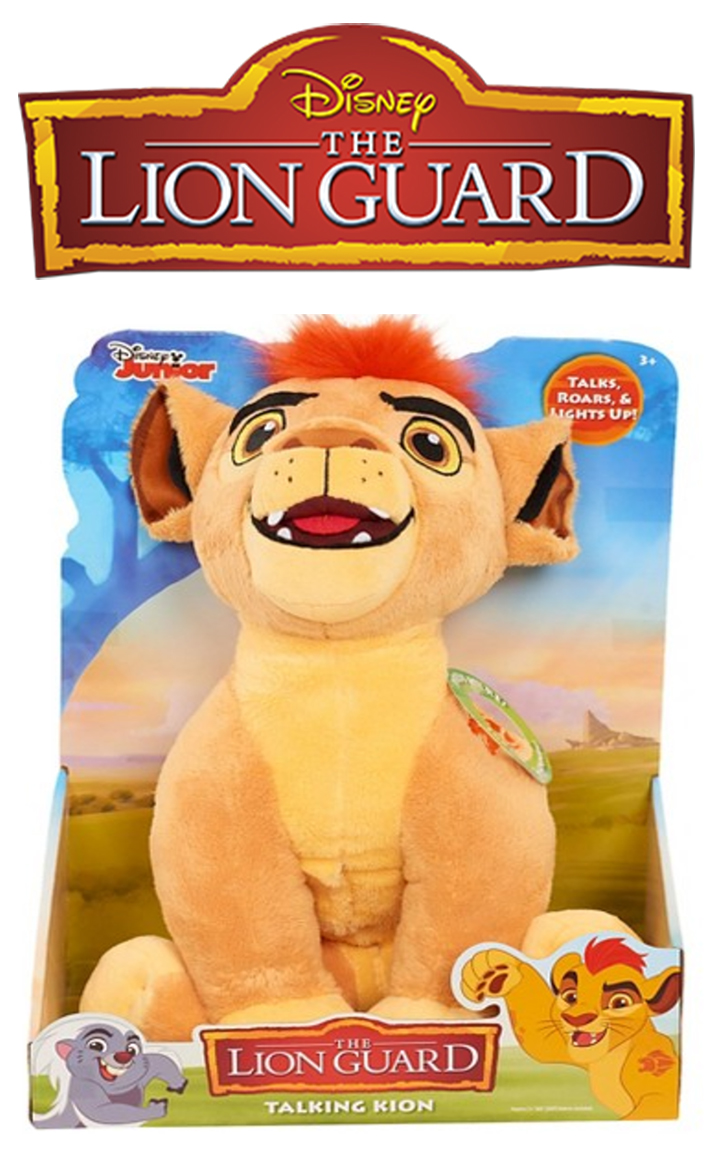 Hero loves him but can’t tell us much about why, except for that he’s Kion and he loves him, rarrrrr!  Here’s what we think of the Lion Guard Talking Kion Plush:

that like nearly every Disney product we’ve ever had, it looks EXACTLY like Kion.  There’s no mistaking the expression, the Mark of the Guard and the shock of red hair that make him Simba’s cub.

that also, he sounds JUST like Kion.  We hear “Hevi kabisa” which means “totally intense”, I learned, in Swahili, a Kion giggle, and Hero’s most favourite saying, “To the Pridelands’ end, Lion Guard DEFEND!”

the Mark of the Guard on his arm lights up when pressed!  This made Hero’s eyes light up because it made Kion all the more real to him.

that despite the technology inside, Kion is super cuddly and not hard and mechanical feeling.  There’s  nothing worse than not being able to cuddle your favourite Disney hero when you’re little.

that we could have every one of the guard made in plush for playing with.  Bunga the honeybadger [or Bunga the Wise, as he’d like us to believe] can be bought so far – but we’d love to see Beshte, Fuli and Ono too – and a Janja to make the group even more fun.

Would we buy it?  Absolutely – we adore Disney toys, they’re amazing quality and completely adored by little [and big] people everywhere.