As soon as I knew I was going to be a mommy, I started thinking of Christmas.  Being 8 months pregnant at the time, all I could think of was how we would celebrate as a little family – a new family – and the fun we would have making memories.  As it turned out, Jensen spent part of his first Christmas in hospital with H1N1 [Swine Flu] but before that night, we did manage to embark on a little adventure to a magical place that we’ve returned to every year of his life except one – and we only missed that one because we were visiting Mickey Mouse for that Christmas instead. LaplandUK

You see, this house believes.  I mean, really, truly believes.  I won’t tell you how old I was when I stopped [or rather, was stopped from] believing in Father Christmas, but he was the one fairytale that despite knowing to the contrary, I still wished was real. 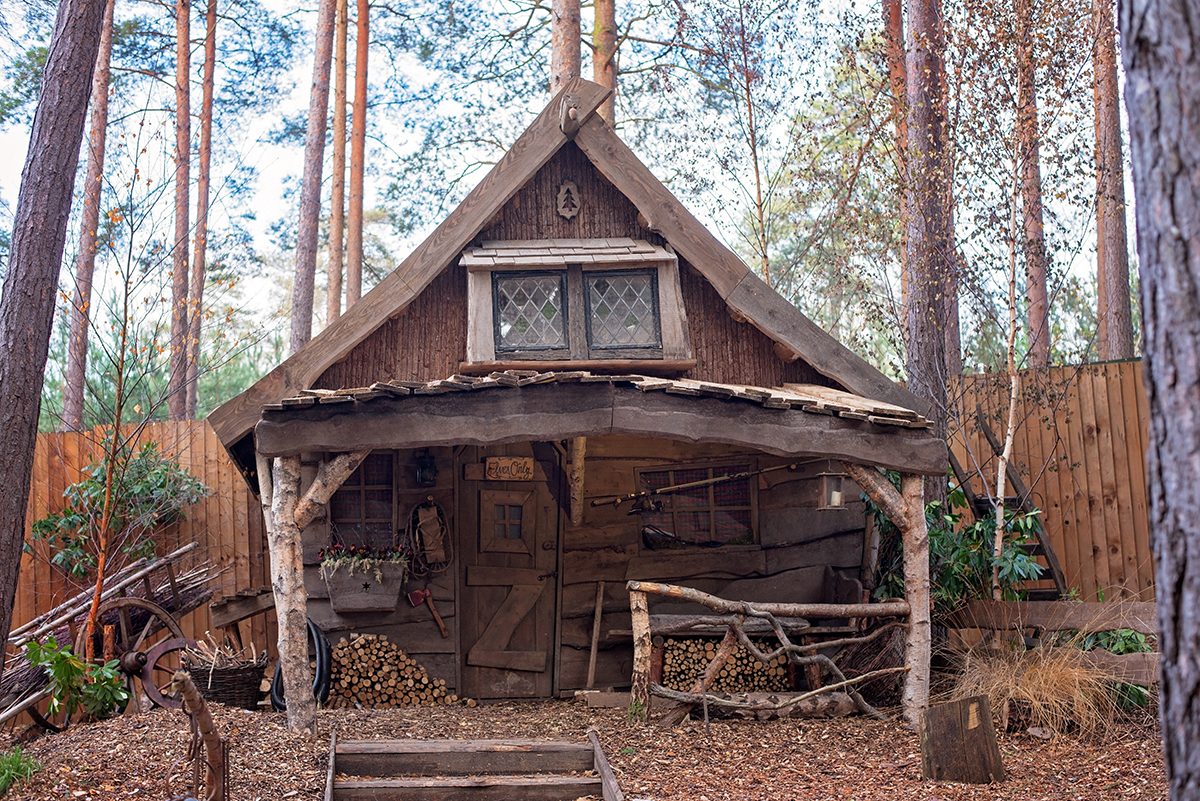 The Father Christmas I visited as child was in a large department store in Birmingham, where one of the floors had part of it sectioned off and turned into a huge Santa’s grotto – which actually was a decorated queue line, but it was magical all the same to me.  We would wait in line, sit with Santa for a few seconds, thank him for the present and then continue on to buy our new Winter coats and Christmas party dresses for the social club that year.  I don’t remember whether I believed that he really was Father Christmas – but I know that I absolutely had faith in the magic that happened every December 24th.

And I so wanted to pass that faith on – for my boys to feel the way I did about Christmas when I was so small – and so I started to research.  To cut a very long story short [it’s nearly Christmas after all] we found LaplandUK, and we’ve been faithful elf helpers there since 2010.  We’ve seen so many changes over the five years we’ve been there – and for little ones who need to believe, there’s nowhere – and absolutely no Father Christmas – that compares.

This year there were three little Joneses for the second year in a row, and we headed off to meet Granny and Grandad for the first time ever at LaplandUK, late in November when Father Christmas had just arrived in England to get his elf crew together.  We made a little video of some parts of our day which you can see, but here’s what we got up to…

We arrived in the Enchanted Woods’ car park and headed to the entrance ahead of time.  This is bizarre for us as generally we are screeching into the area, throwing the boys’ coats or jumpers and hats on and hot-footing it faster than Rudolph down to the entrance.  Not this time though – we arrived way ahead of our time so that we could take a look around the entrance hall for a change. 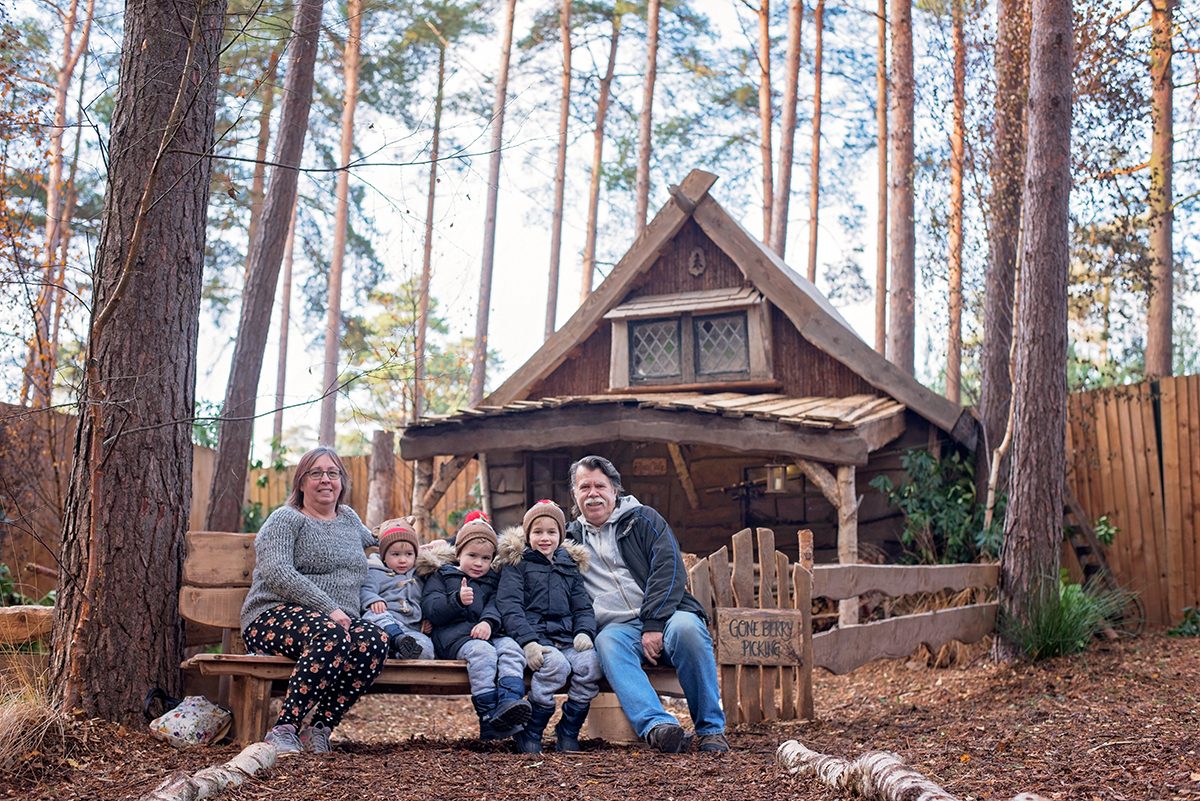 When we’d met Granny and Grandad, we headed into the main departure hall, and checked in with the Elves at their little desks.  Elf check in is detailed and beautiful  – they use feathers and a large old book which is a sneakily disguised computer to check guests in, and pre-ordered elf Jingles [LaplandUK currency] can also be collected from there.  What’s very lovely about visiting more than once is that Father Christmas remembers that you’ve been – and gives each returning child a little present at check in!  If you see our video you’ll find out just what they are. 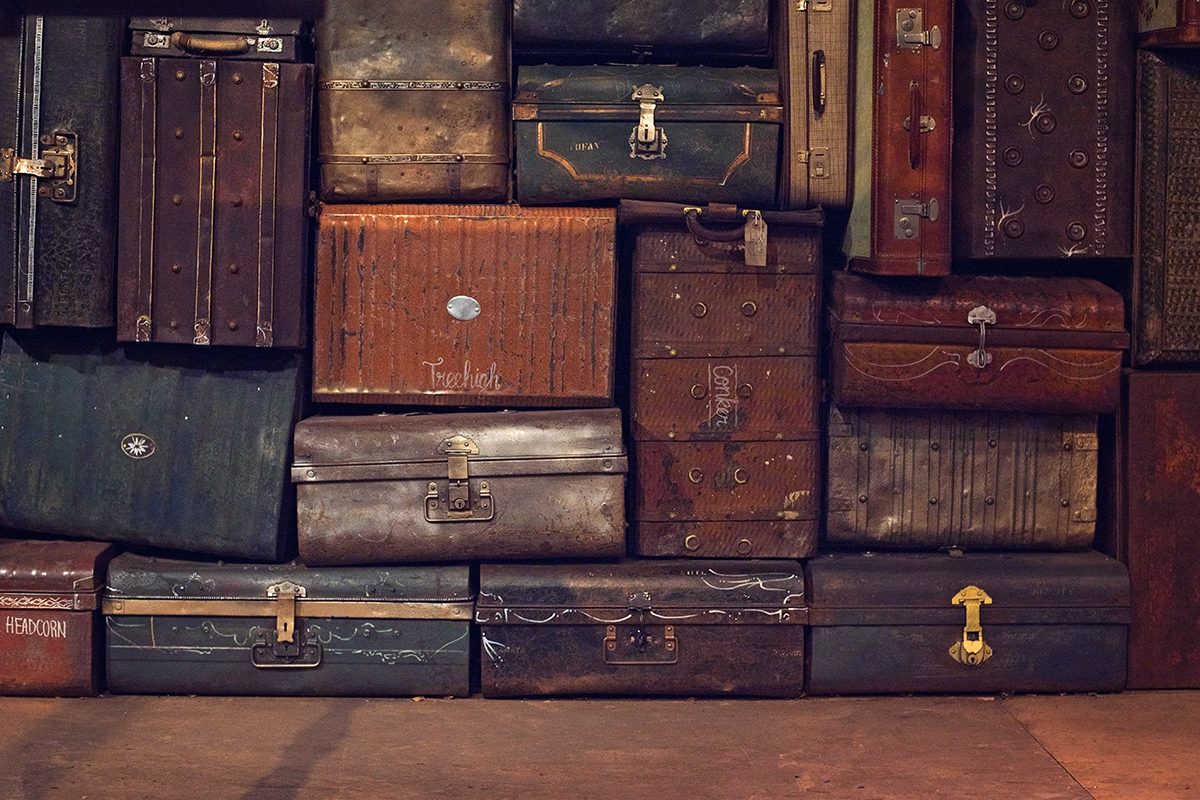 At check in, stickers are also given out to let you know whether you are team husky [us 4/5 times] or team reindeer.  We were husky again this year and the boys were delighted as it makes them think of Casanova and Excalibur.  At 2.30pm, the Travelmaster arrived and spoke to us all whilst we were trying to spot suitcases of the elves that we knew [Conker, Eeko, Sage…] and then sent us on our way deep into the twinkly part of the Enchanted Forest. 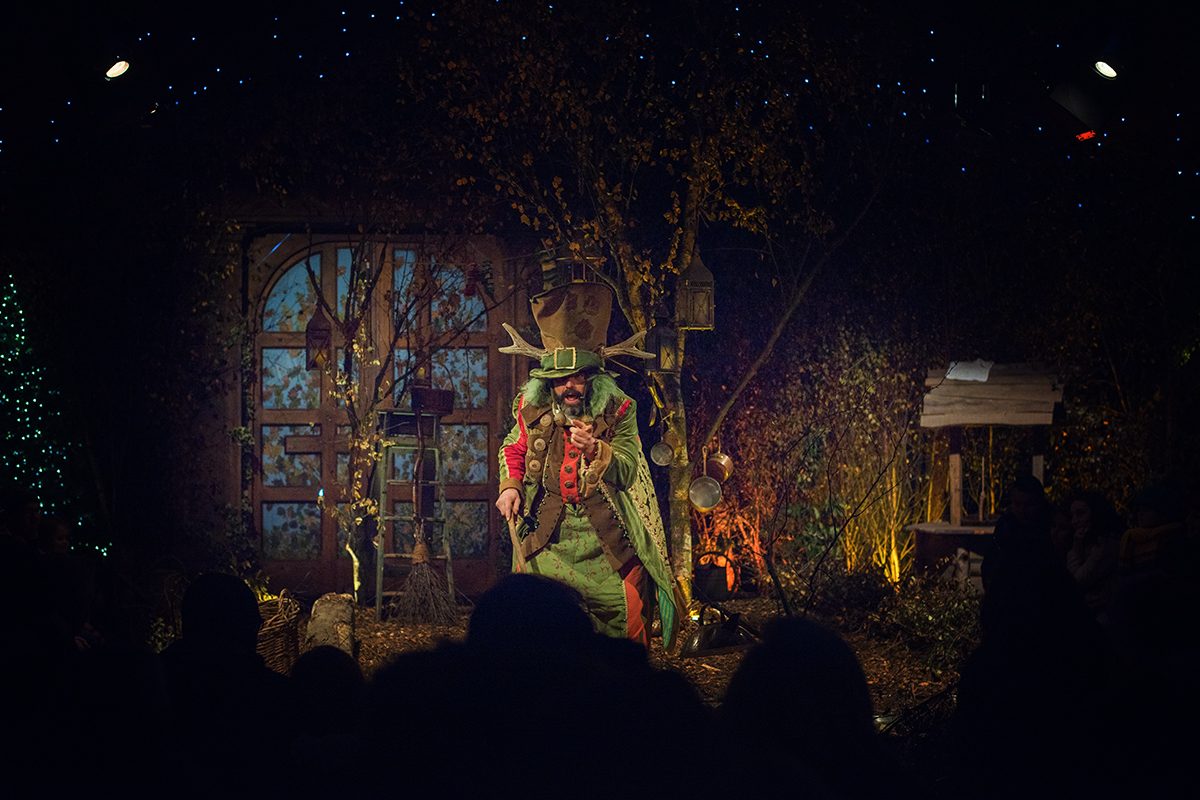 Inside the woodland area we got to see Sage and Eeko, and Jensen remembered where elves came from – he was so impressed to be able to shout it out [it’s not where you think!] and then after a little performance by the elves, we left to head to the Toy Factory where we helped Father Christmas to make toys to fill his sleigh alongside the busy elves [working night and day].  A little warning for parents – make sure you sing, or you’ll be sorry. 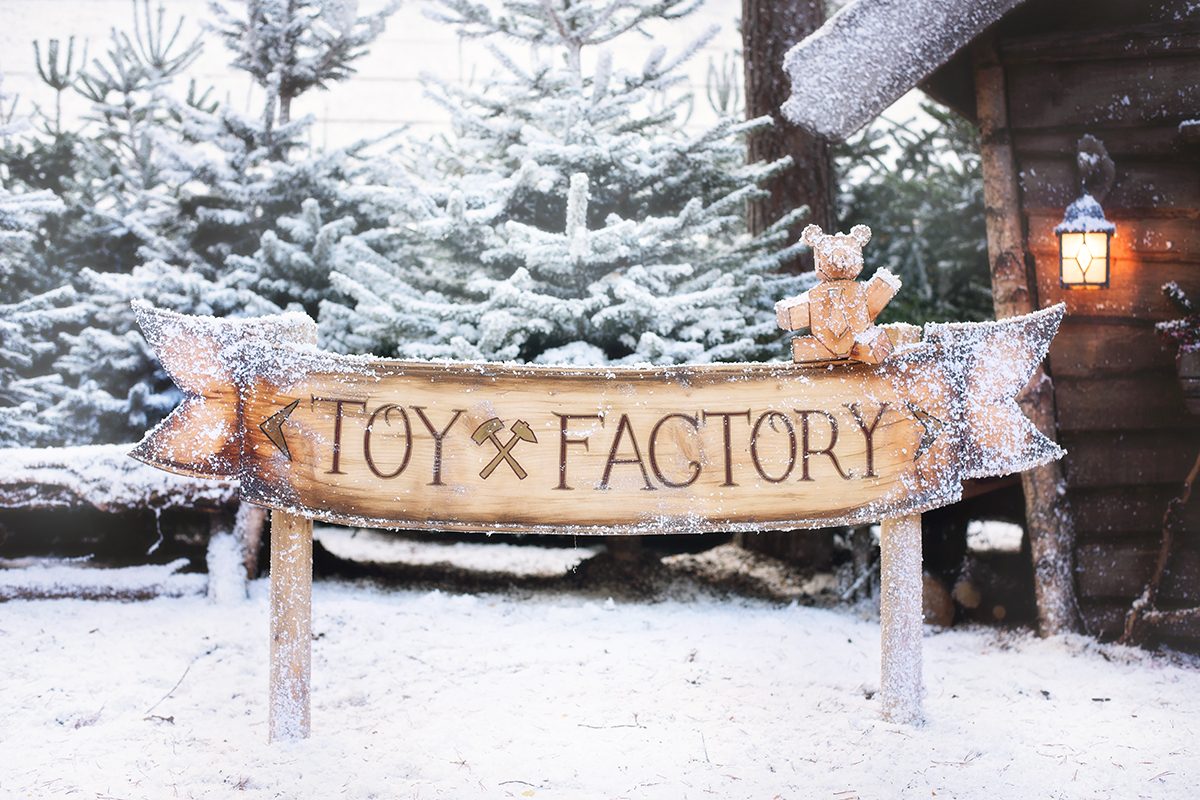 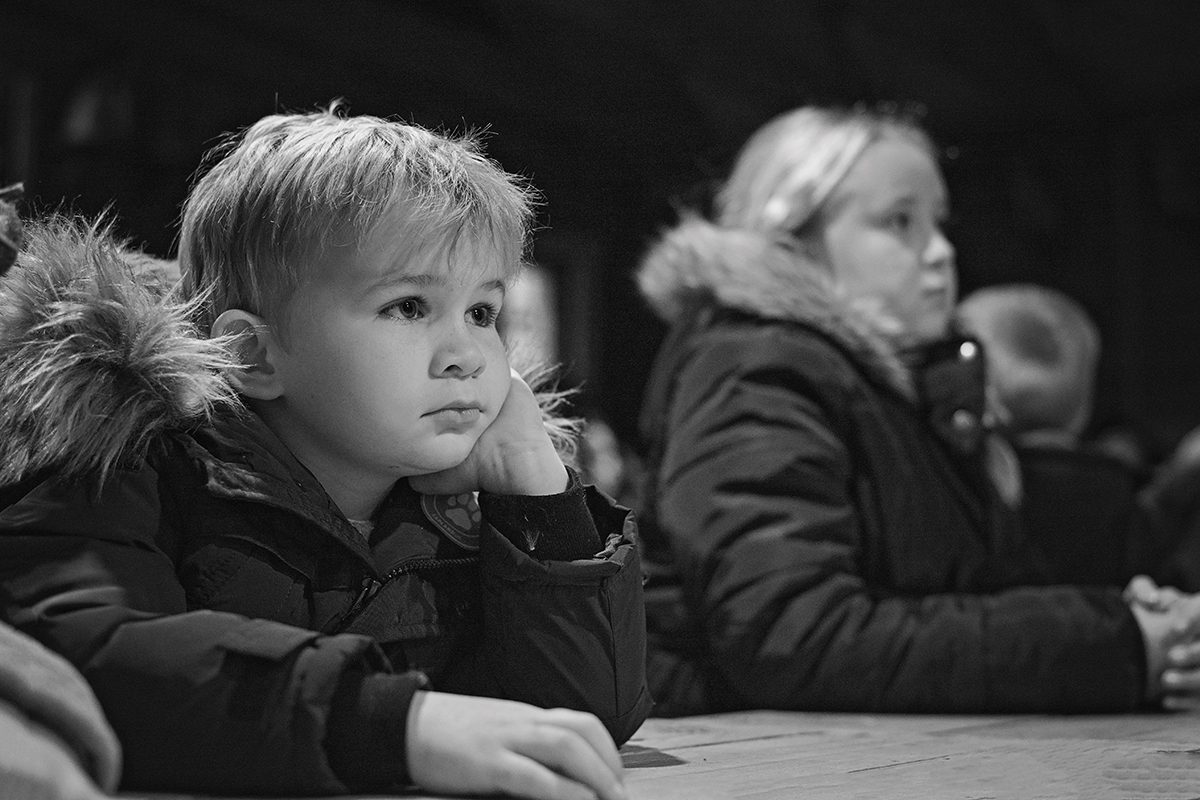 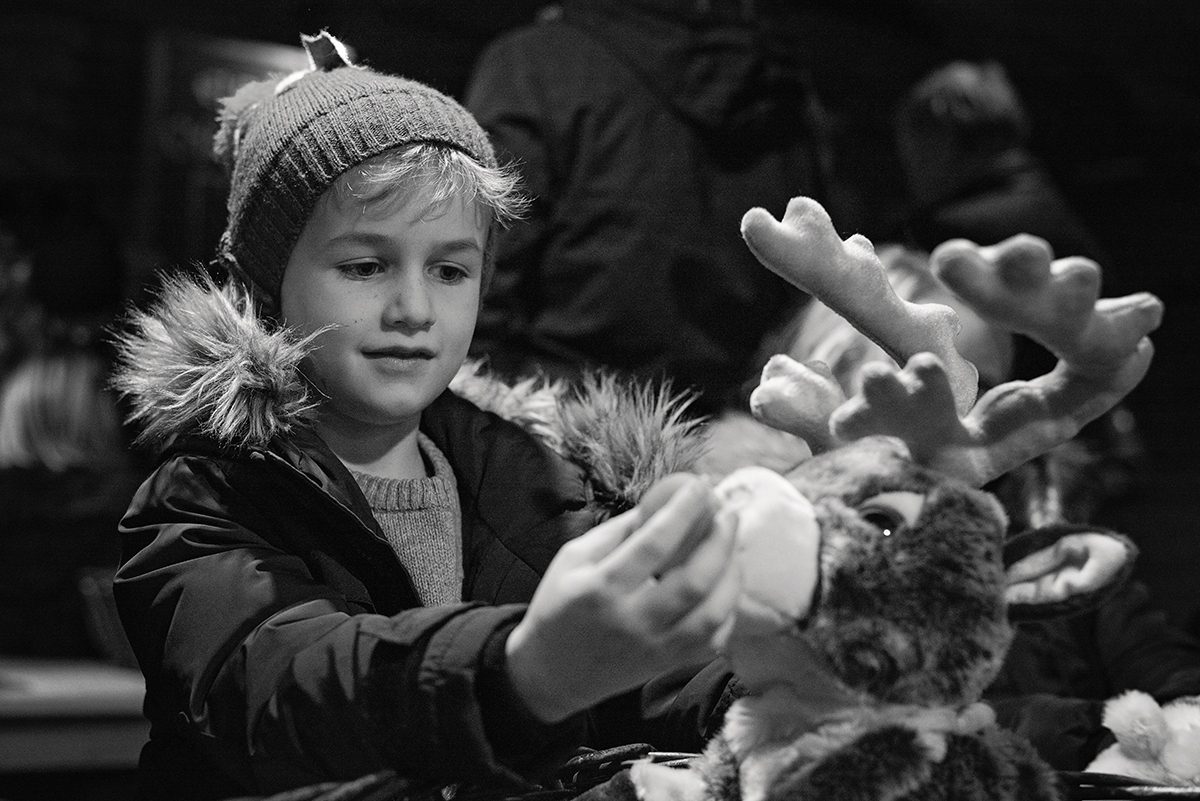 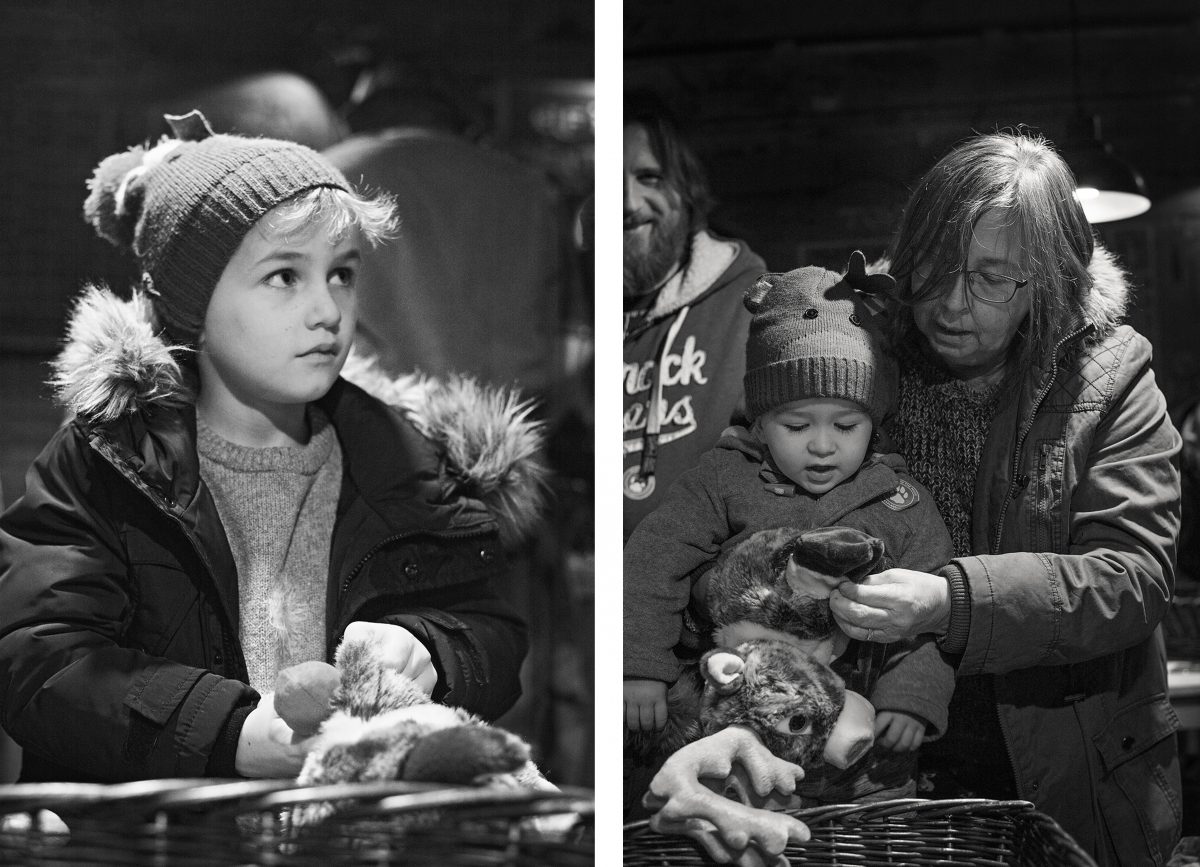 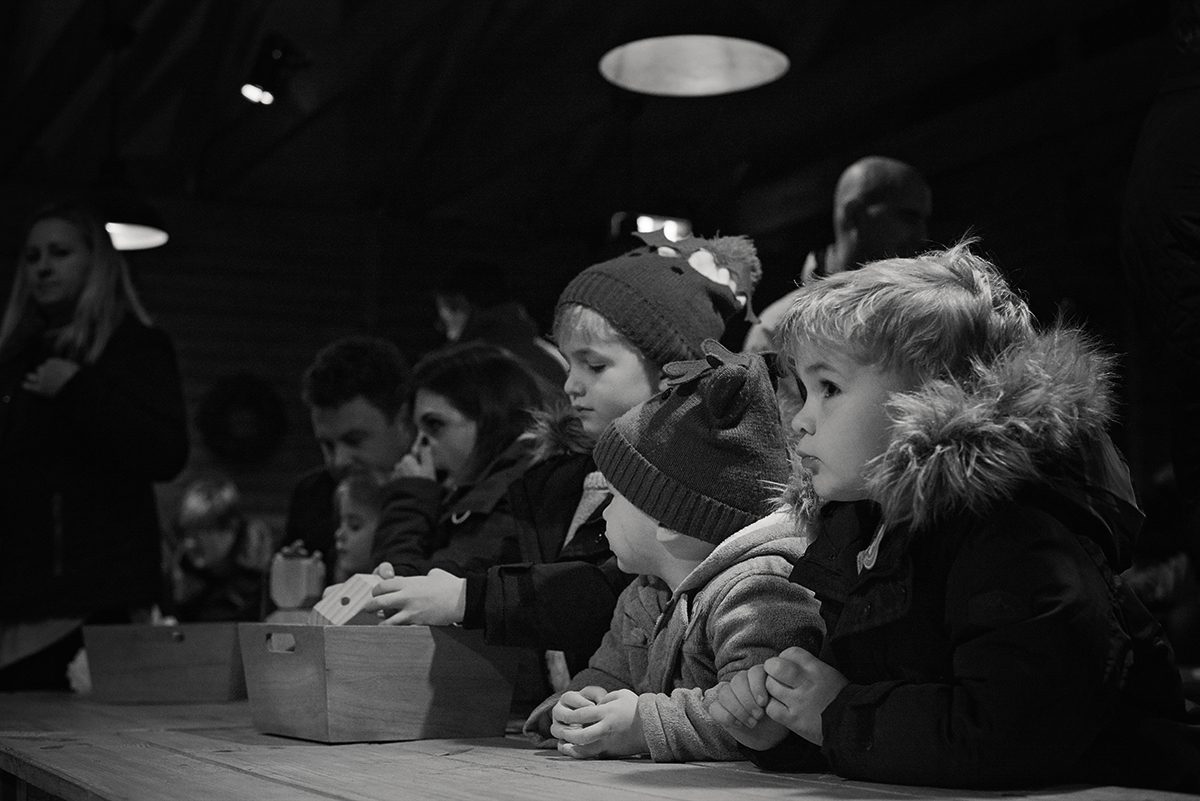 Anyhow, one reindeer and a wooden bear later and we were on our way again to see Mrs. Christmas, decorate some gingerbread and hear a story.

After the workshops, we were let into the Elf Village for 90 minutes of fun.  Fun for little boys in our family means ice skating and although they were fine as they were able to have the skates which fix to their shoes and comfortably glide about the ice, poor Daddy and me [Hobbits with wide feet] were subjected to the pain of wearing plastic moulded ice skates which cripple us each year but which we still wear because we too love ice skating so much.  I’m not sure LaplandUK would let me bring my Bauers with me each year but I’m seriously considering asking next year.  Despite wanting to cry in agony, we had so much fun zipping about the ice with the penguins and trying to overtake each other. 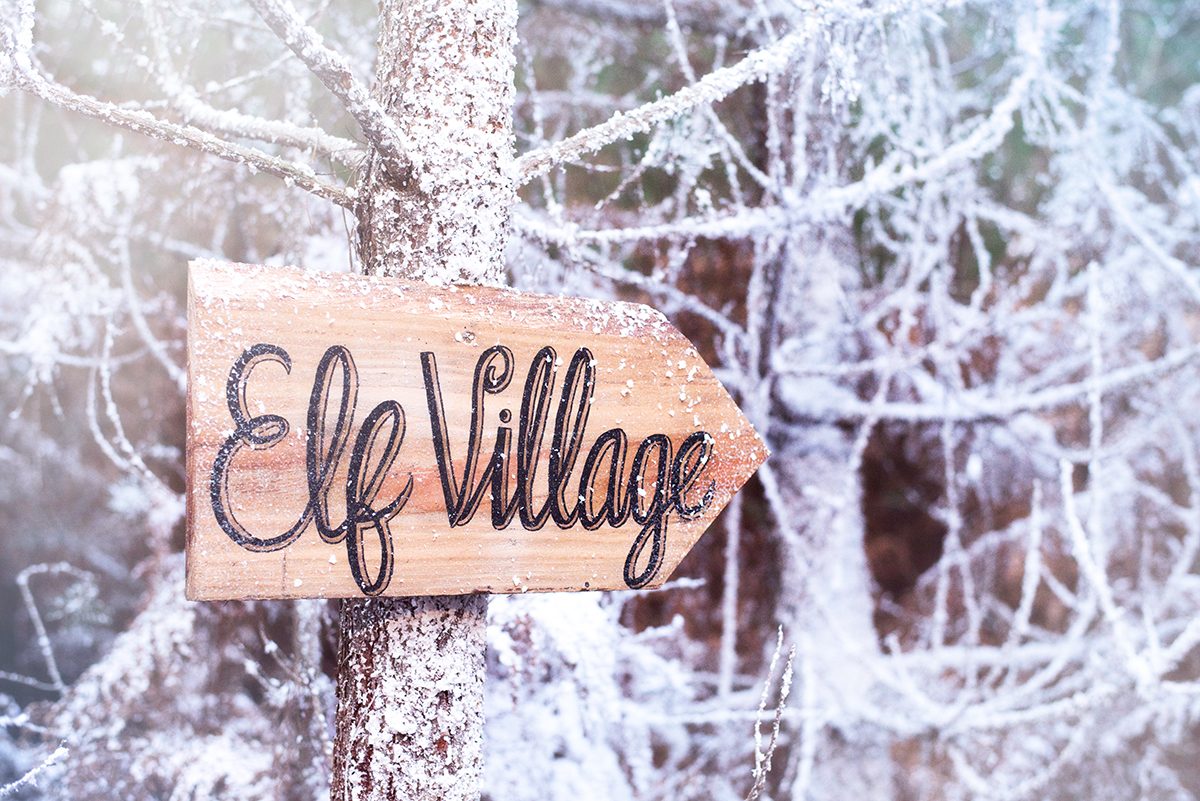 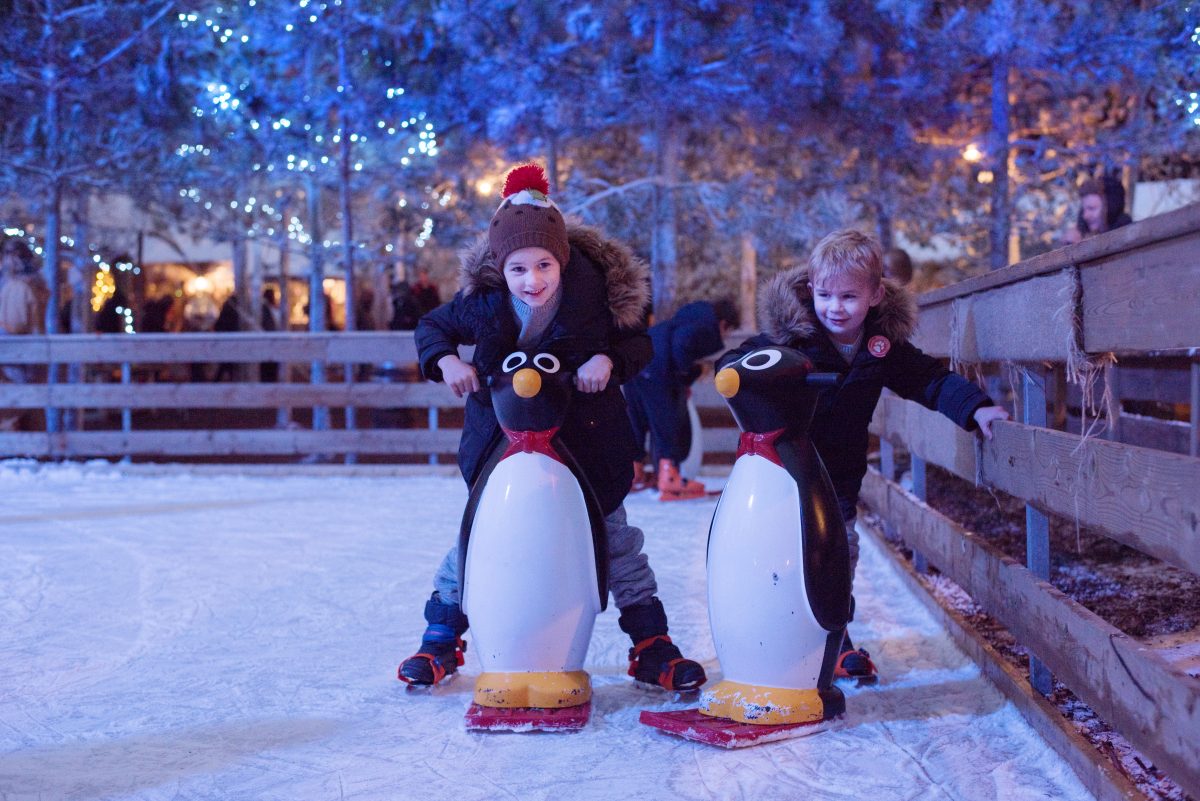 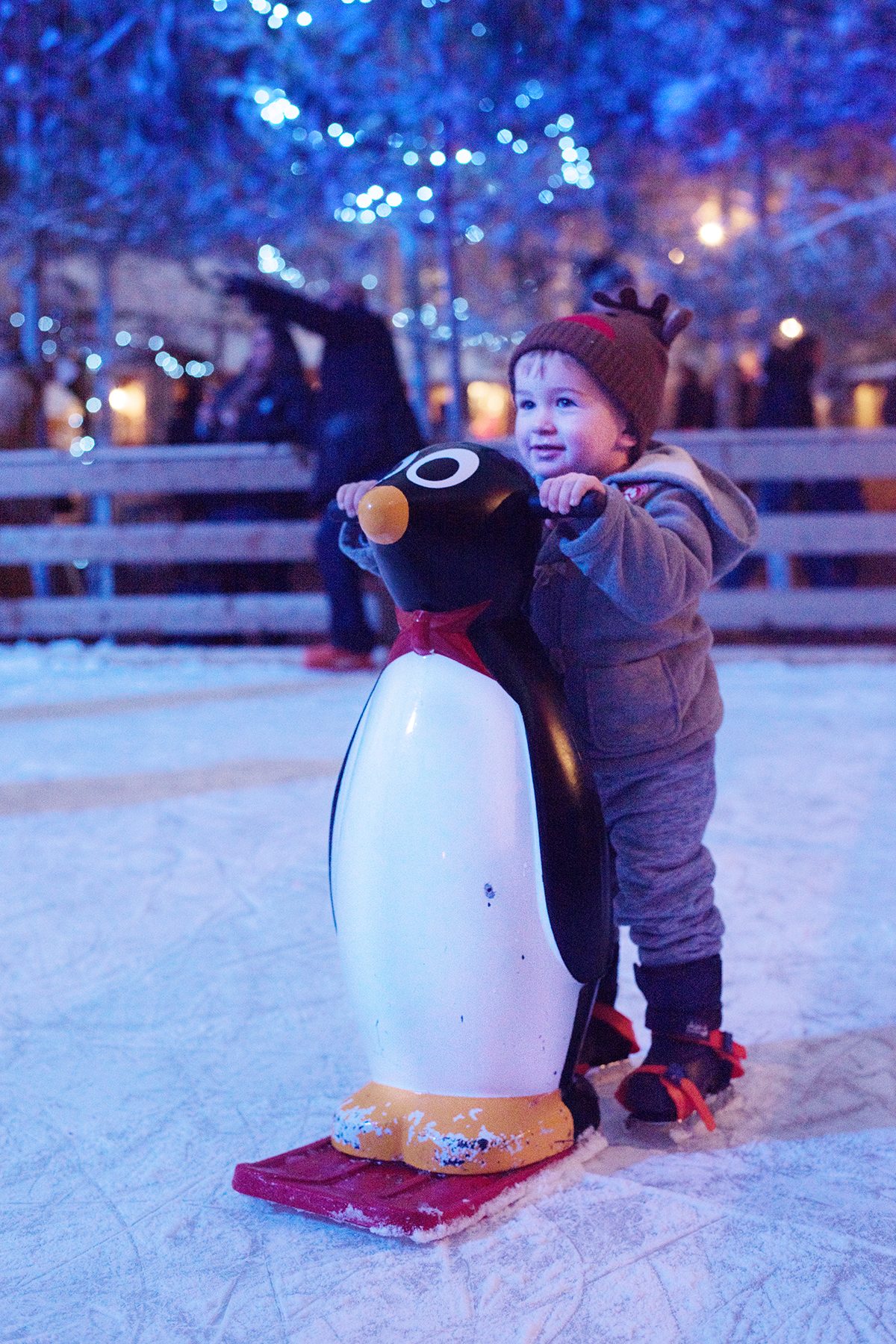 When we’d finished on the ice we took a tour of the shop, met an owl [puppet – a very realistic one!] and a very tall Elf, stroked some huskies – although that was bittersweet for me as the larger husky looked a little like Casanova from the back and even as I type this, I can feel the tears welling in my eyes.  It was like having my boy back with me again and after a few seconds I had to leave the boys with their dad for a little walk, because the tears wouldn’t stop.

One of our boys’ favourite things to do is to visit the Elf Post Office to write to Father Christmas.  The Elf Postmaster seals and stamps the letter for each little one and then they are able to post it.  Lyoto also bought himself a husky postcard from there. 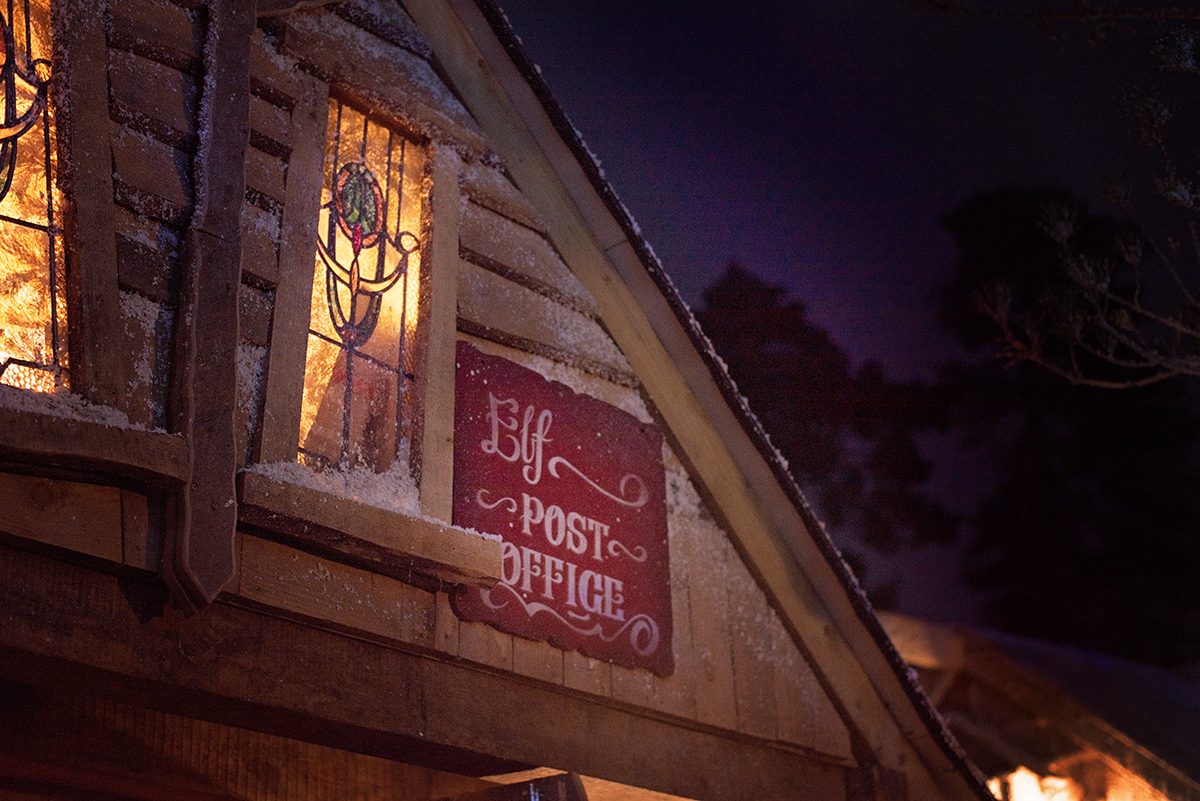 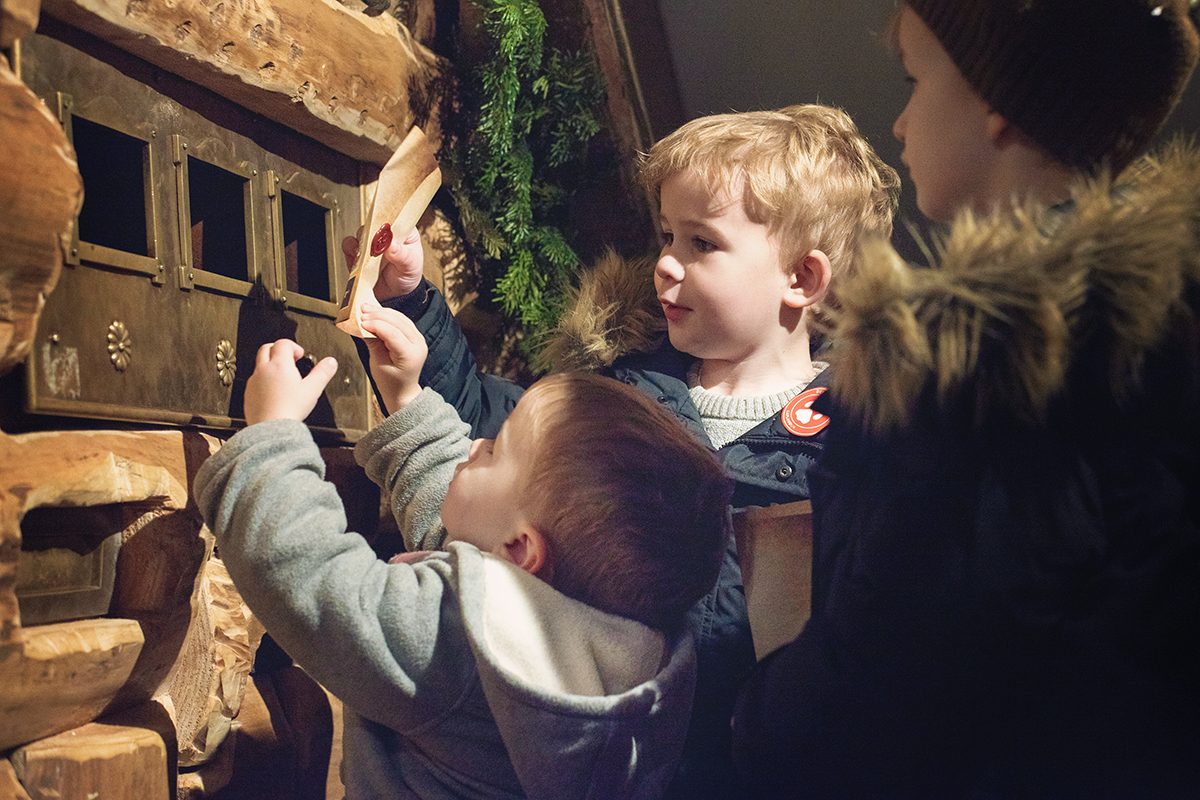 Finally it was time to join the queue to head down to the Elf station to see Father Christmas.  We followed the snowy path and found the log cabin where we checked in with the elves and waited for Father Christmas.  The boys made sure they were smart and ready to see him, and I just loved seeing the looks that they gave each other when their names were called to see the big man himself.  They walked, hand in hand towards the door and made nervous little boy chit chat with the elf about how fun their day had been already.

There’s always a little wait outside Father Christmas’ door.  It’s probably the longest wait of our boys’ year as they wonder whether Father Christmas really has been watching them, and what he will say to them.  And then the door opens, you’re invited in, and nothing prepares you for seeing your little one meet LaplandUK’s Father Christmas.

If you’re like me, you’ll try and hold it back, but you’ll cry.  My heart practically explodes each year when he calls my boys’ names and they walk into the room to see this giant, this legend of a man.  He just IS Father Christmas.  With a long white beard and hair, and a wise and warm personality.  He knows your little ones and seats them by him, chatting earnestly with them and telling them what he’s seen them get up to this year.  They’re instantly drawn to him, because it’s impossible not to believe.  Father Christmas told Lyoto that every time he had checked in on him, he had been playing Mario Bros on the computer – and he congratulated Jensen on his hard work with his handwriting [Jens’ handwriting has now never looked better] and he asked Hero all about how he was playing with his big brothers at home and helping Mommy.

At the end of our chat together – and it truly is relaxed, unrushed and fantastic quality time with Father Christmas – he gave the boys a beautifully illustrated book for bedtime, and had a surprise for the boys.  As we have quite a few huskies from Father Christmas, instead of the black and white husky that first time visitors received, the boys were given the most gorgeous golden huskies by Father Christmas.  We posed for our photo as a family – although a few photographs are captured throughout the session also – and these are worth their weight in gold because each year we receive a beautiful photograph from LaplandUK – all of us looking the right way, all happy.  We bought a few of the photographs as digital downloads because I loved the capture of them checking the nice list, which was taken at the moment that Jensen’s name had become a little difficult to find.  Seeing Jensen panic that he might not have made the list, whilst heart stopping for Jens, showed me just how little he is, and just how much he believes. 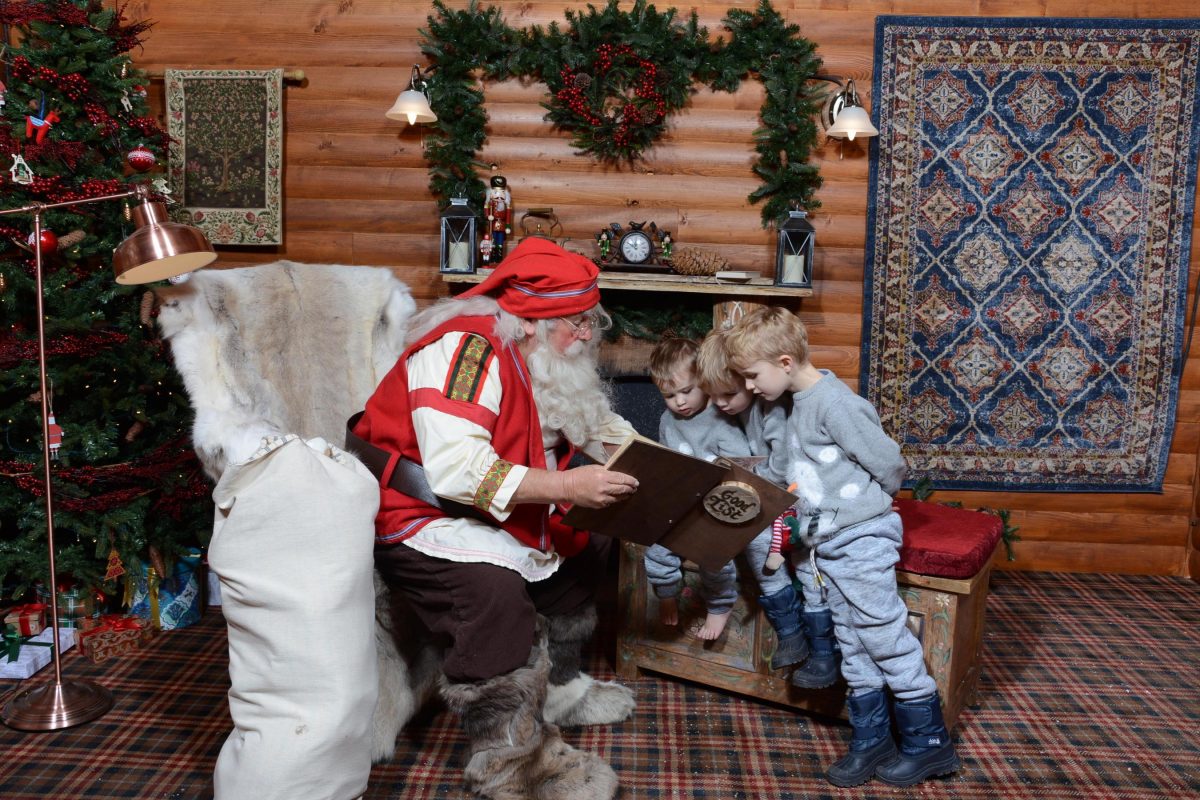 We were utterly delighted to be guests this year at LaplandUK – and I know my parents adored their time with the boys in such magical surroundings [my dad didn’t stop smiling throughout everything].  Our visit to Father Christmas is absolutely the most treasured memory that our boys store each year – and the part of their Christmas celebrations that they anticipate the most.  There is nowhere that brings the magic home like LaplandUK.  From the snow covered pine trees to the toy factory reindeer that can be secretly bought ready for placing under the tree, each year it gets even better than the last.   Three and a half hours in a Winter wonderland with your little ones really does make your Christmas the most enchanted ever.  It’s by far the best Christmas destination in the UK and worth every single penny and then some.  If you’ve missed the magic this year, you can sign up at LaplandUK to receive early booking emails for 2017!