When I was little, I was afraid of the dark. I was afraid of what I couldn’t see.  I still dislike the dark when I’m alone – if I go to a conference and I’m in a hotel room, I sleep with the lights on.  Only when my husband is there can I bear to close my eyes to the inky blackness – and still I’m a little wary.  Whilst we’re getting it all out there, I also keep the back of my head covered with my blanket and my toes tucked in.  I’m 39.
I don’t know how it starts, or when or why it starts, but sooner or later every little one I’ve known has had some worry or fear at night time…and those fears grow.  The little monsters get bigger, hairier and have more teeth – whilst we all get less sleep.

Since Jensen was born in 2010, my friends and I have all invested in various sleep aids, soothers, toys with glowing bellies – all suitable for babies.  We can’t buy them fast enough – but our babies have spent nine months in darkness, and yet still we rush to protect them from it as soon as they are into the light.

When Jensen reached an age where he could verbalise his fears, and tell me he didn’t like the dark, there seemed to be nothing out there that could put his mind at ease – and a nightlight wasn’t cutting it.

Like most parents, we reassured him that the shadows were just that, and that his nightmares were just dreams, but nothing worked and night after night he would wake, crying for one of us to soothe him back to sleep.  Now Lyoto joins in, too.

Completely out of ideas, a few months ago we heard of a Kickstarter called Glow Away and we got very excited.

Instead of doing the usual parent thing – “it’s just in your imagination, sweetheart….go to sleep now”, which obviously [in retrospect] is making your child feel as though they are not only wrong, but also alone and unheard, instead of soothed and reassured, Glow Away embrace the idea of monsters in the night.

Glow Away have bought to life a cuddly little cutie of their own, called Boo.  Boo launches a double pronged attack on the monsters with every package that is received by night-frightened little ones everywhere.

Firstly, inside the package is a storybook, featuring Boo.

Of course, every parent worth their Amazon salt will know that there are SO many books on the market written to allay children’s fears of the dark – although not as sweet as this one.  So why does this one purport to work? Because it doesn’t stand alone.

Glow Away has a secret weapon up its pyjama sleeve.  With every storybook is a pink or blue duvet cover and pillowcase featuring Boo the little monster.  We won’t spoil how it protects and reassures your little one just yet – but it’s magical!

If you have little ones who want the house to be illuminated 24/7, stay tuned for our diaries this week to see if we can end our boys’ fear of the dark with the help of Boo, the Glow Away monster…. 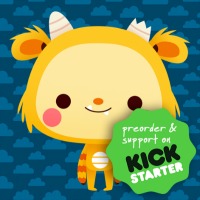 If you can’t wait, head over to their Kickstarter page where everything is explained – and where you can become a supporter of their business to help banish the bedtime monsters for good!

NO SLEEP ‘TIL BEDTIME: SUZY SNOOZE BY BLEEPBLEEPS

MARLOW AND THE MONSTER: SHARON CRAMER
« SEEING & BELIEVING – HOW TO ENCOURAGE HAND WASHING WITH CHILDREN
QUINNY VS. BABYWEARING: THE TEST DRIVE »