0shares
I’m sick.  Lyoto’s cough has eventually caught up with me and combined with my asthma and a lovely stomach bug to boot, being pregnant is less fun than usual.  My head is pounding and I feel really rather poorly…and so what better time to start our trip recap of Walt Disney World, 2013…
After being a member of the DISBoards whilst I was busy planning our Fairytale Wedding in Walt Disney World, I’d seen so many littles being surprised in magical ways with the news they were off to the House of Mouse and I so wanted to create a little magic at home for our boys too.  However, at 3 and 1, it couldn’t be anything too complicated.  Eventually it was inevitable who would break the news… He who never grows up.
Jensen adores Peter Pan and Lyoto is a fan too (although would pick Tick Tock over him if it came to it), and the chance to meet Peter in Florida was Jensen’s dream come true.
There was a HUGE obstacle in the path of our surprise…ME.  I cannot keep a secret like that.  I cried at YouTube videos of Disney World, just thinking about the trip, and Jensen was  more than a little puzzled as to why Momma was sad to see Mickey.  It was just too much for me.  And, I wanted it to be something they were both looking forward to, and not just an instant surprise.  So I got my (green, feathered) thinking cap on again.
Finally I had it planned.  First, when everything was booked, we asked simply if they ever wanted to meet Mickey, and left it at that.  Whenever adverts would come on the TV for Walt Disney World, Jensen would tell us over and over that he would love to go and see the castle.
When we got to two months out, we made a huge countdown chain as a family and then told them what it was for.  Jensen told everyone he knew that he was going to go on an airplane and see Mickey in America!  Each day the excitement of the shortened chain was shared between them as they tried to count them between them, which is hard when you can only count to 20…and even harder when someone really small repeatedly removes links for fun.
Finally, as the month of departure came, we started talking about Peter Pan and how he was looking forward to them coming to visit him.  As Jensen was asking daily when we were going to go on the airplane, we told him that Peter would write to him when it was time, and tell him to come.  He seemed very happy with that explanation and told his Granny over and over that Peter was going to be writing him a letter.
So I set to work, and a week before we left, Peter started to leave little gifts in their bedroom that they woke up to… (There are more on our Instagram account here). 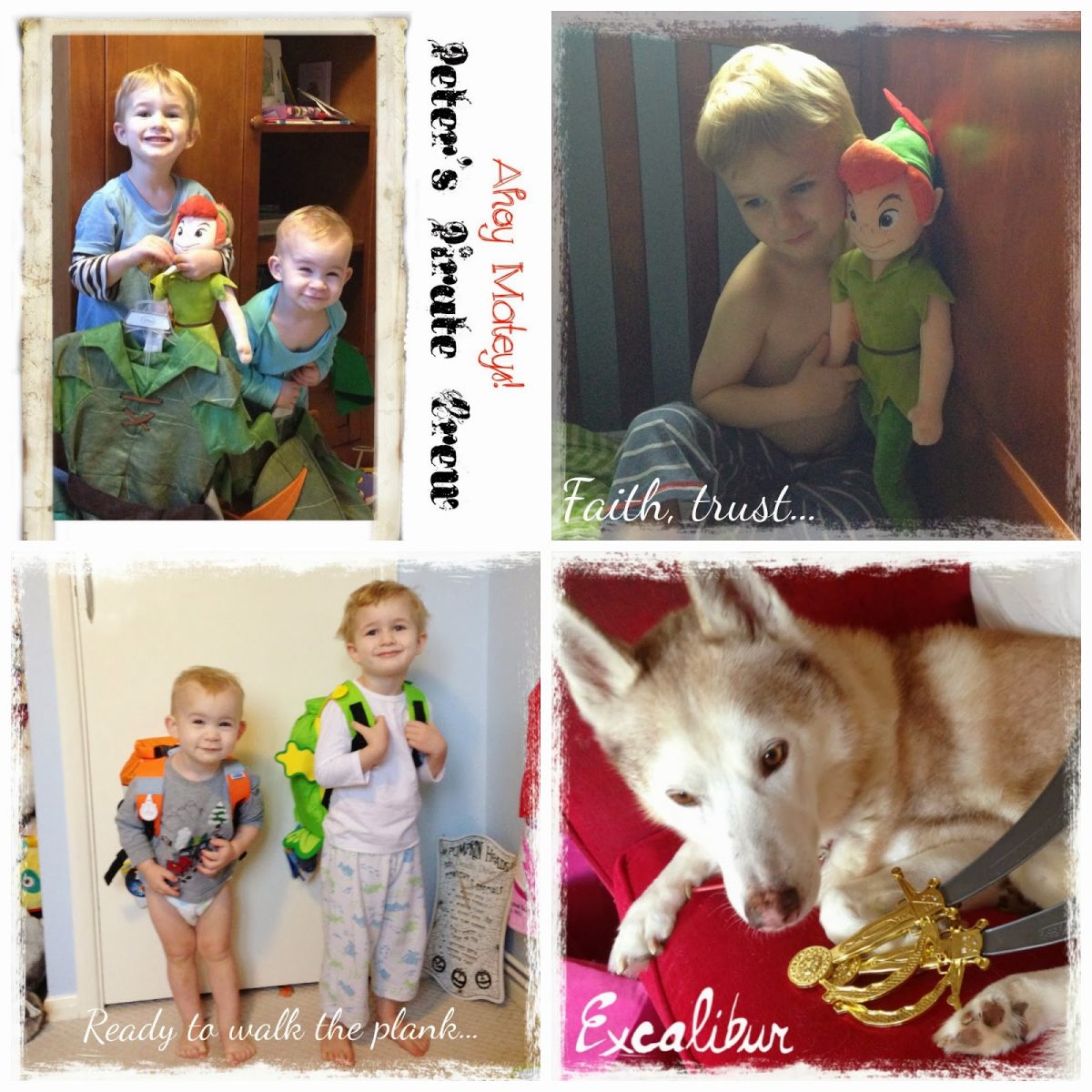 Two nights before we left, our master plan went (very suddenly) into action.  It was all or nothing.  I would have loved to have surprised them upon waking, the morning of the trip, but we knew that wasn’t realistic because we were leaving for the airport and things were going to get very hectic (and stressed between Momma and Daddy)..and applying a vinyl decal in the dark didn’t seem like the best plan.
So, the morning of the trip to the airport hotel, we distracted them with a trip to the park with Dadda whilst I set the scenes.
The very lovely and super talented people at Edith and Elizabeth (you can see their Facebook page here) were just as excited as us about the boys’ trip, and sent us a shadow.  A very precious shadow that bought a little boy’s dream to life (thank you SO much, Edith and Elizabeth!), which I carefully applied to the wall.  It was perfect.  Simple and so easy to apply despite my fearing the application to the wall after our nursery decal I’d chosen elsewhere had been a nightmare to apply years earlier.
After a million and one adjustments to the angle of Peter’s shadow, it was finally in the perfect position. I sprinkled fairydust everywhere, added Captain Hook’s feather and left the letter that had taken a few candle-burning evenings to create…then I closed the door.
Later that day as we were finishing lunch, Daddy said he heard something upstairs and two little sets of toes ran up to investigate…and quickly started shouting in delight, calling for us, because… 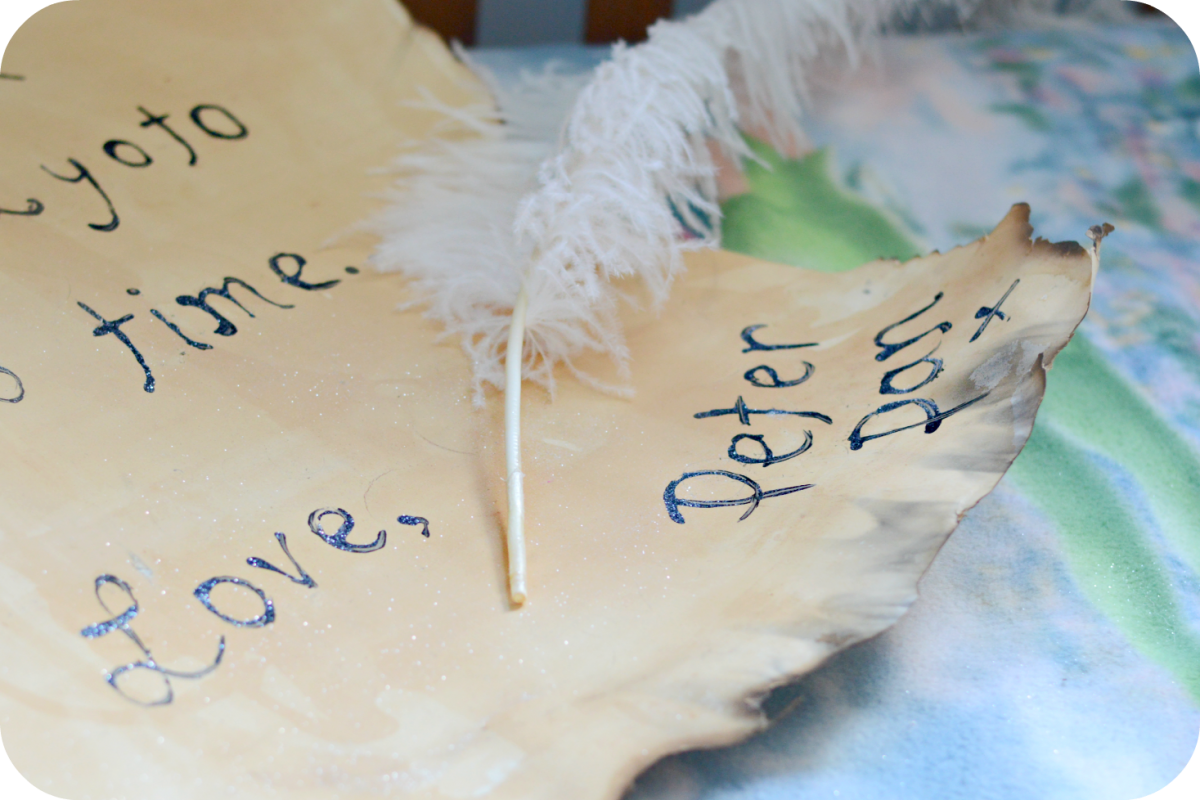 Peter Pan had been. 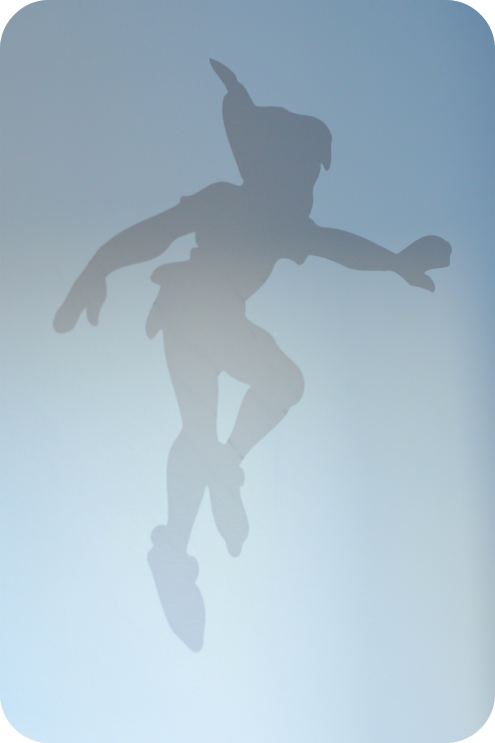 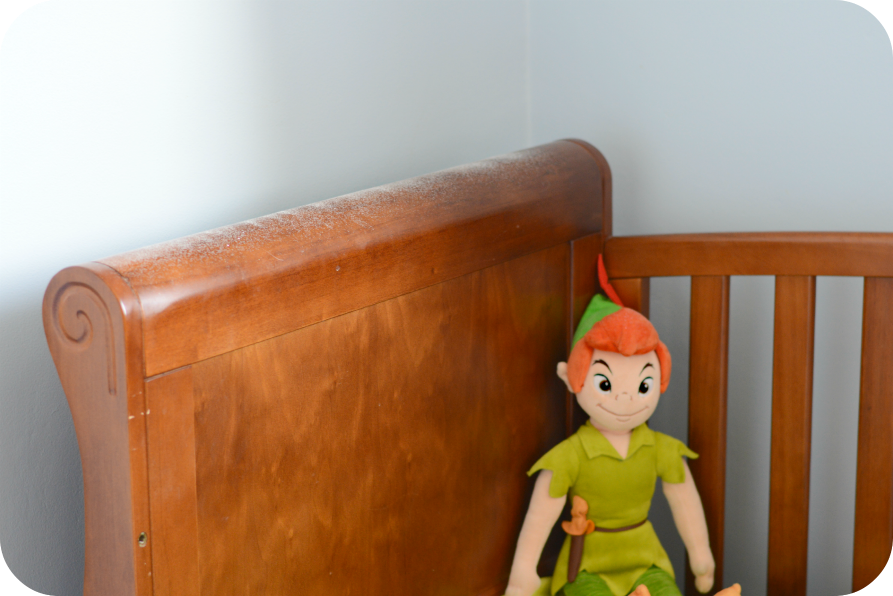 They were elated.  Crazy happy…and I cried. 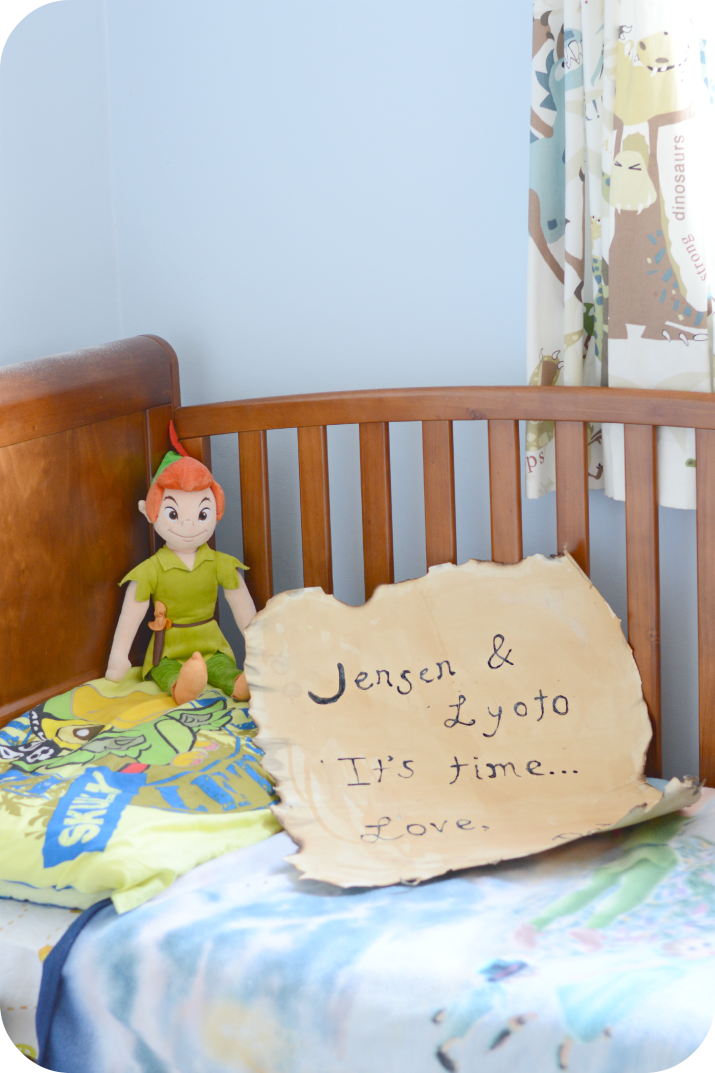 The letter was read and re-read over and over. 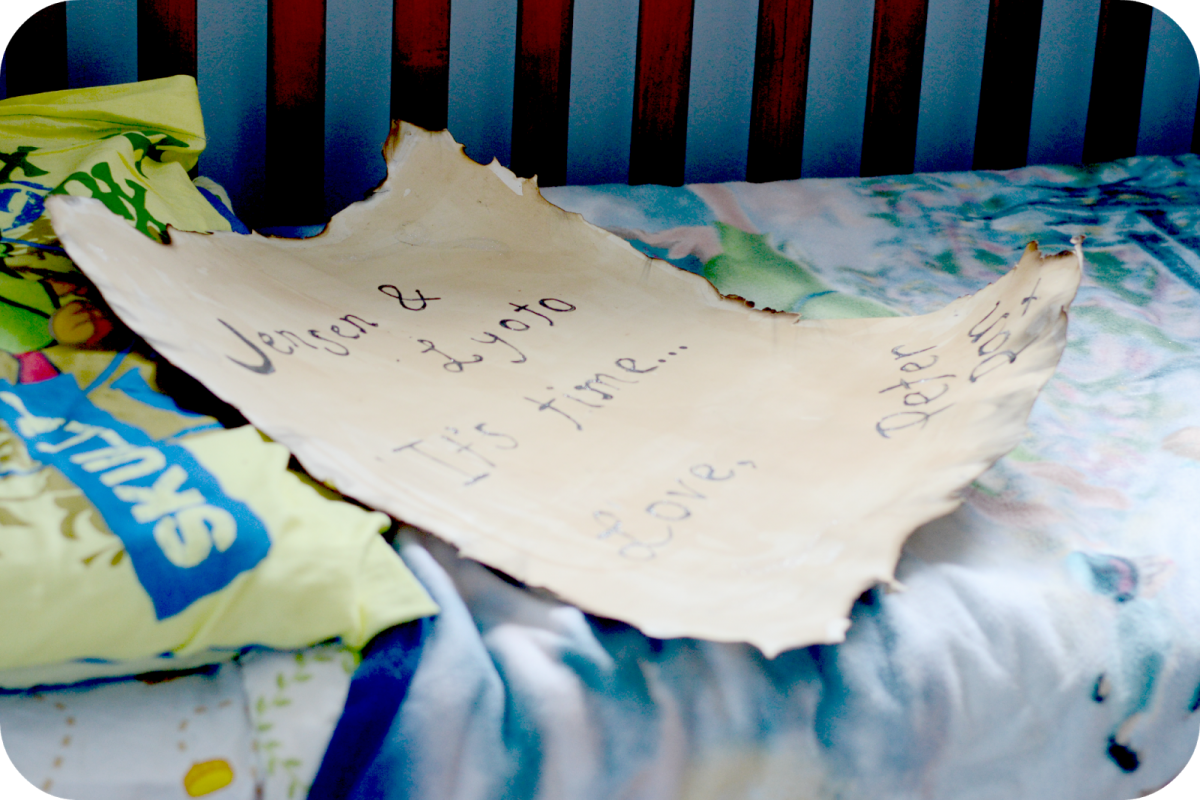 Jensen just couldn’t stop looking at the shadow and the letter… Peter had left his own precious shadow behind…and must have left via his own bedroom window, just like in the film!  Lyoto, oblivious to the details but rather excited, mostly enjoyed playing with the old codfish’s feather. 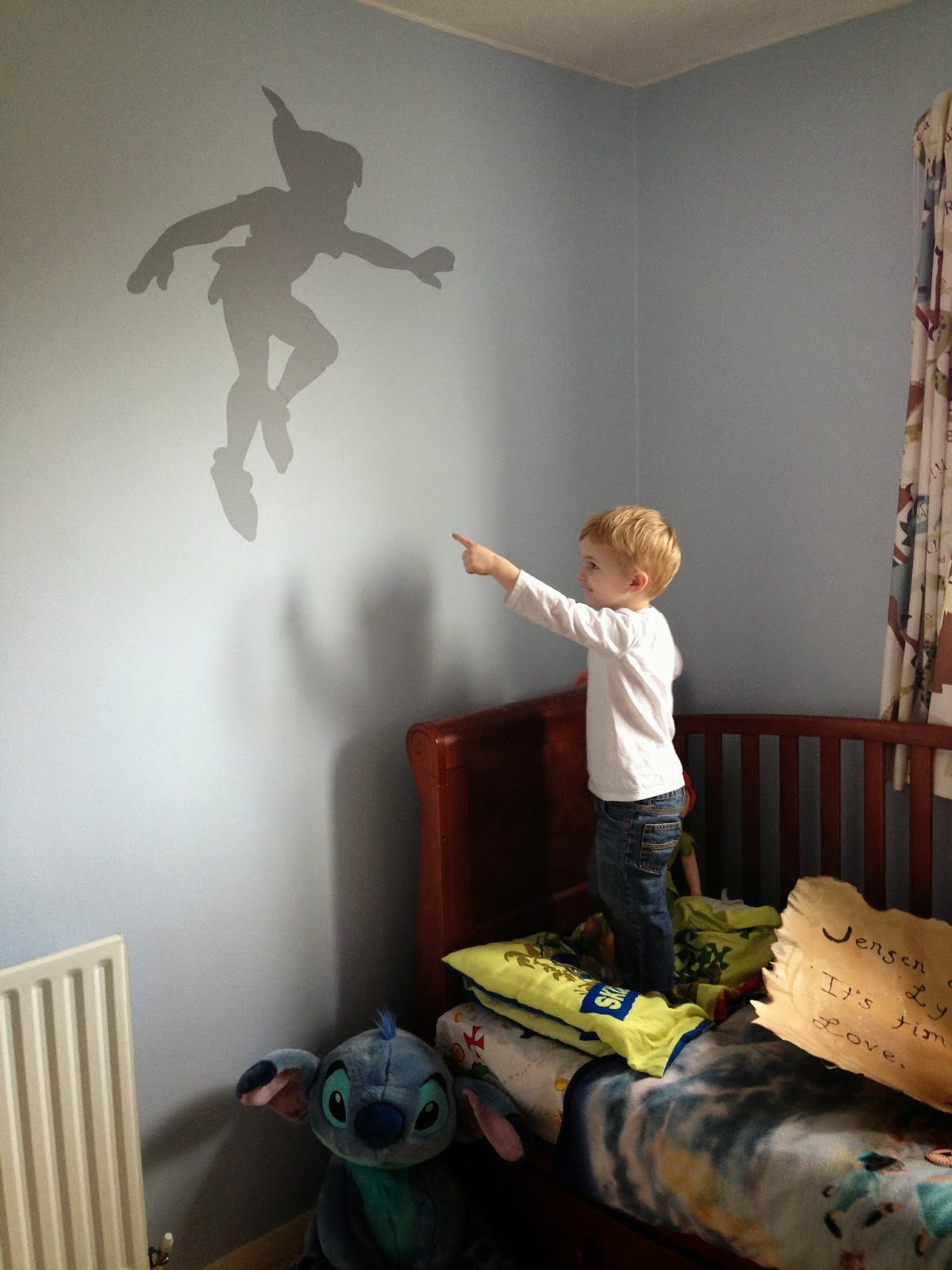 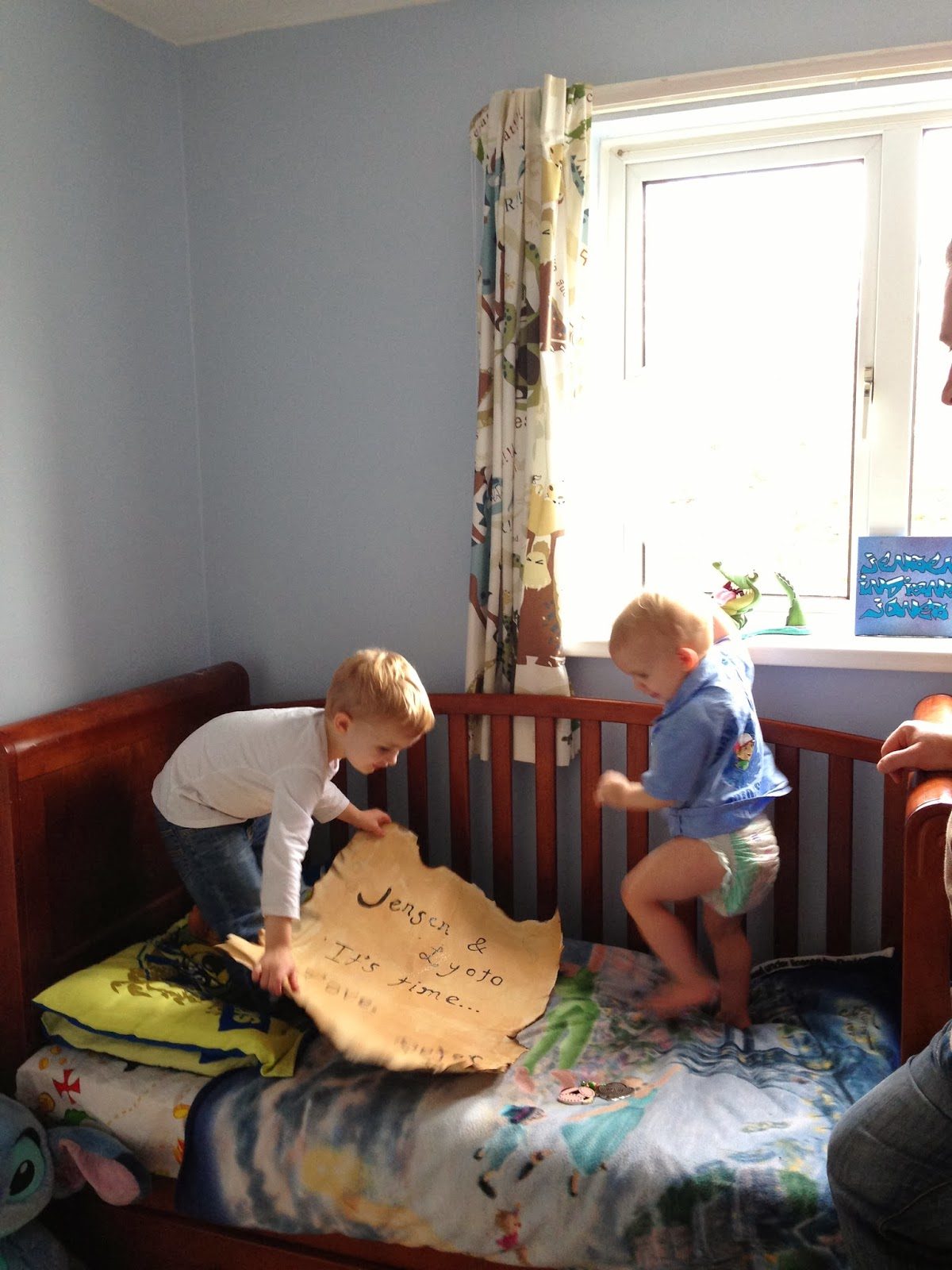 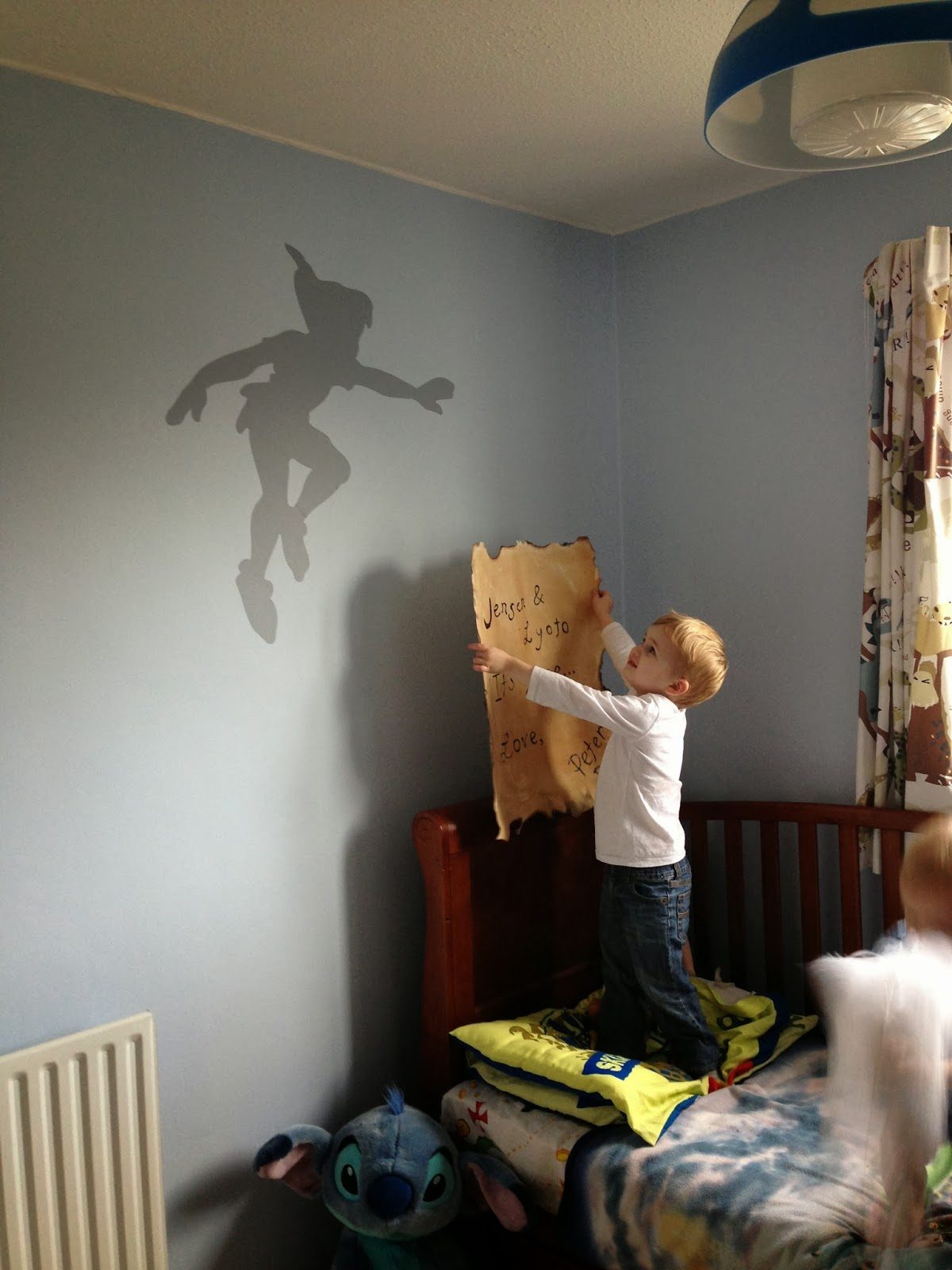 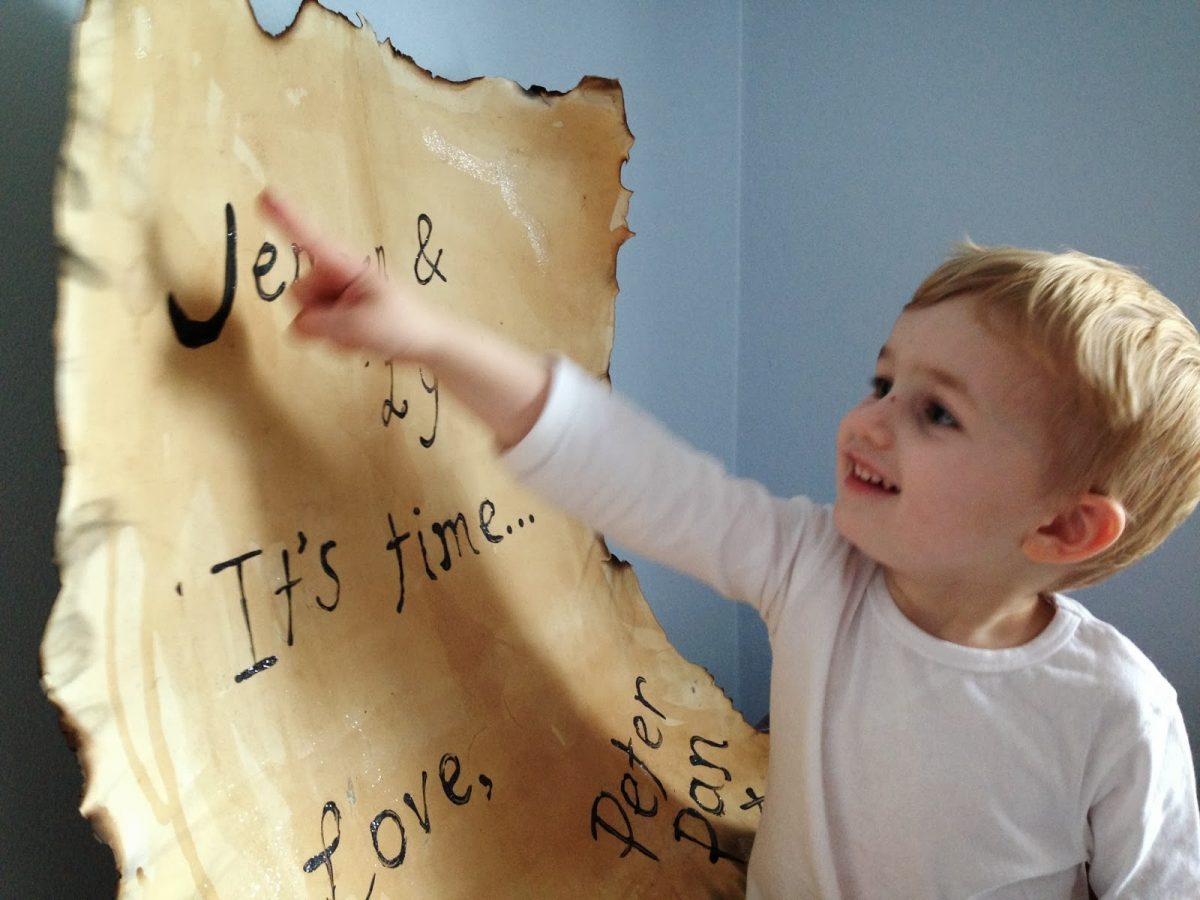 …and then the doorbell rang.  Peter had even packed them new Trunkis with treats and activities for the airplane!  He was still here….and it was time to go and catch up with him… 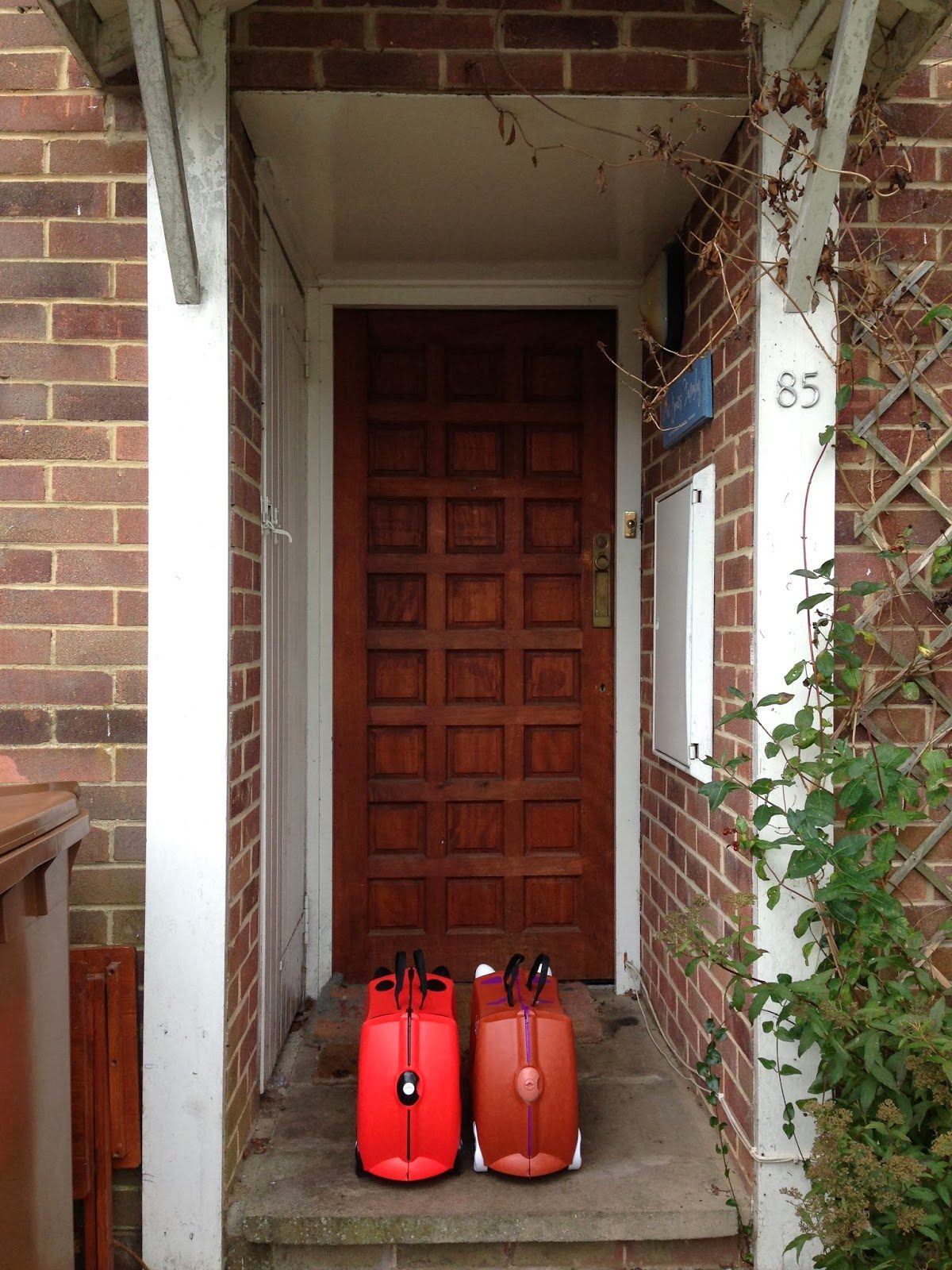 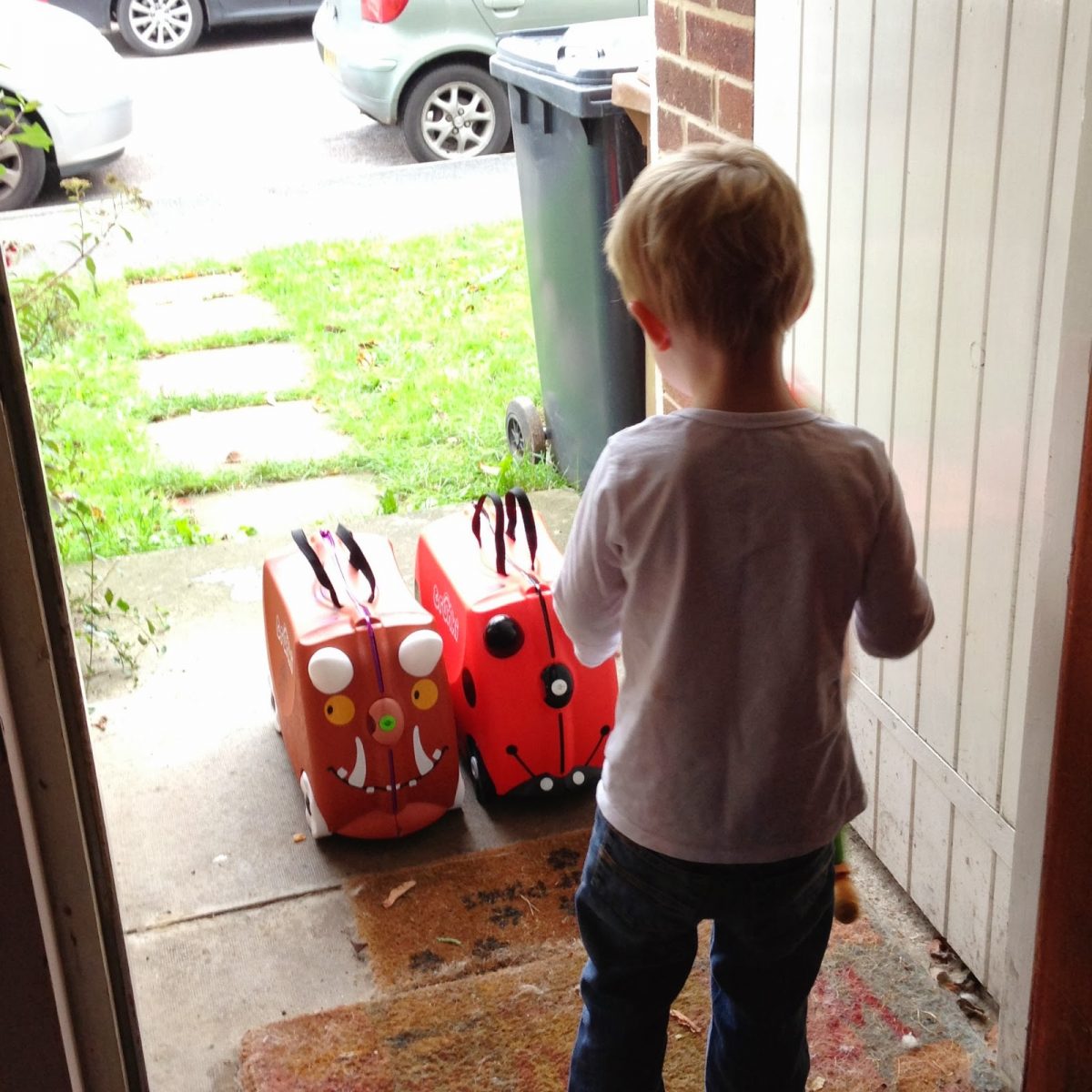 The car already packed, we bundled in and off we zoomed, to Gatwick’s Marriott hotel, one step closer to Peter and a month of dreams come true. 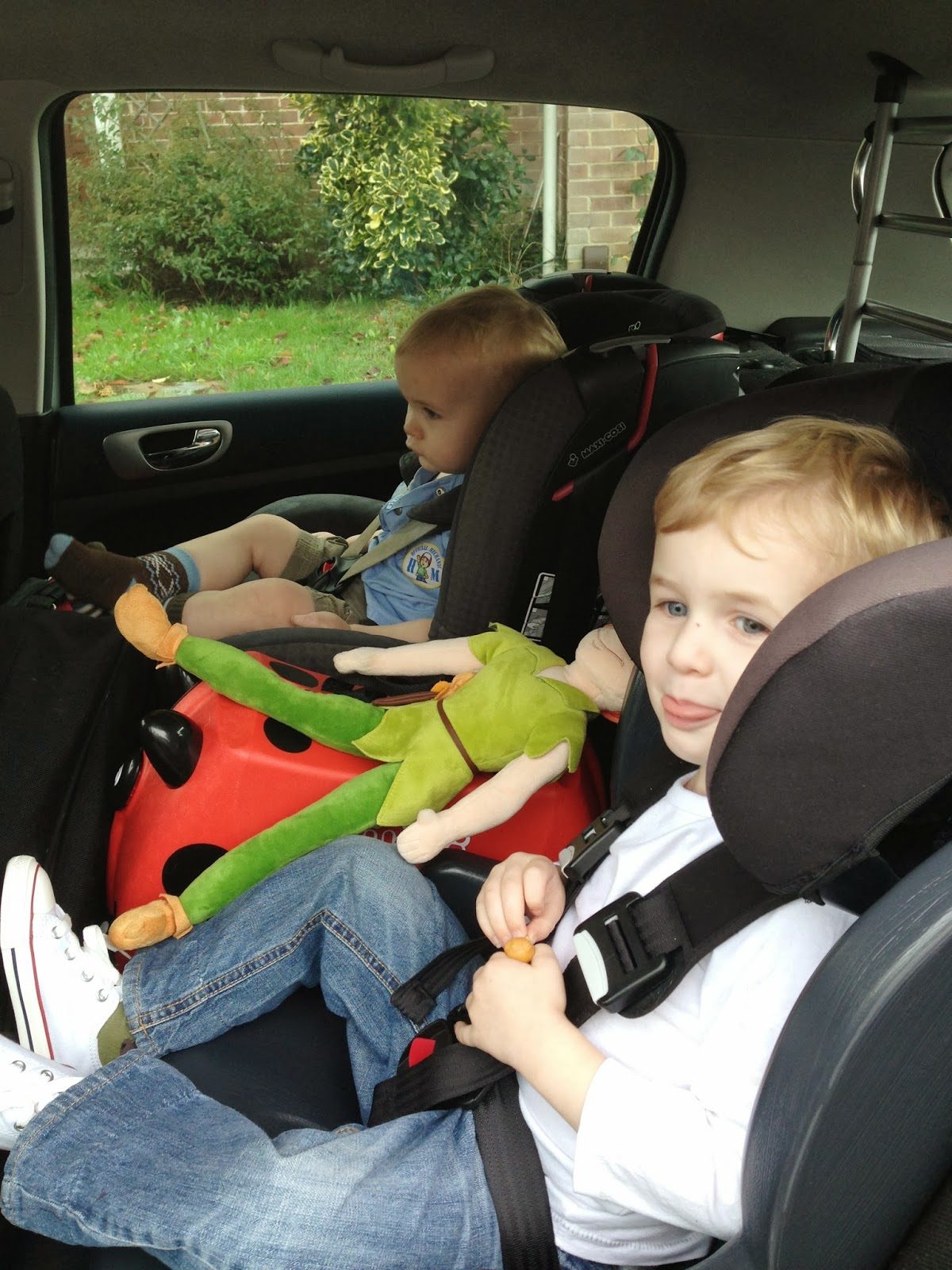