SUBSCRIBE TO OUR NEWSLETTER FOR SIX SECRETS TO AN EGG-CEPTIONALLY FUN EASTERTIME AT HOME!
You are here: Home / CELEBRATIONS / EASTER MEMORIES 2013: THE EASTER CANDY PARTY

0shares
It’s no secret that Our Little Adventurer likes to celebrate.  After the sacrifice of his own birthday party this year due to the cost of our upcoming Disney trip (which will be SO worth it when we get there!) we’ve tried to make it up to him in less expensive ways, scattered throughout the year.  With all of the candy around the house, we decided that Dadda would take the boys to the park for some much needed fresh air, whilst I frantically cobbled together a little party table.  In less than 30 minutes, a small party was assembled!

Not a husky was moving, Momma told them,”Or else!”… 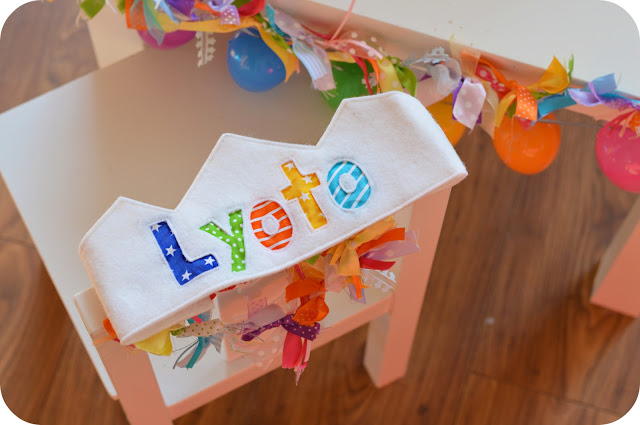 The eggshells were hung under the table with care, in hopes that two little boys would soon be there… 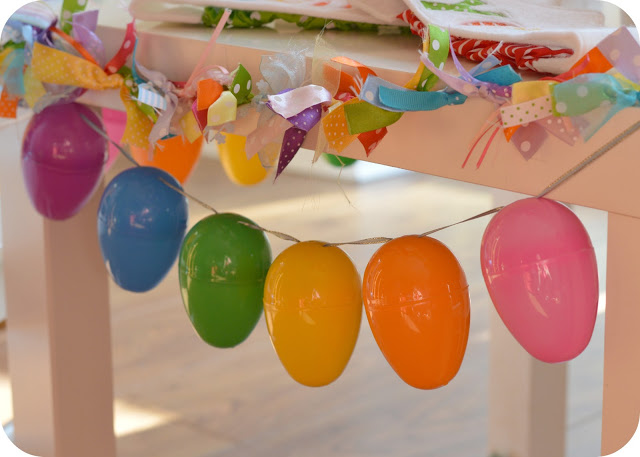 …and me in my PJs, no slippers or cap,

I was sat on the sofa after setting out the hats…

(Don’t worry, I’m stopping here before it gets worse) 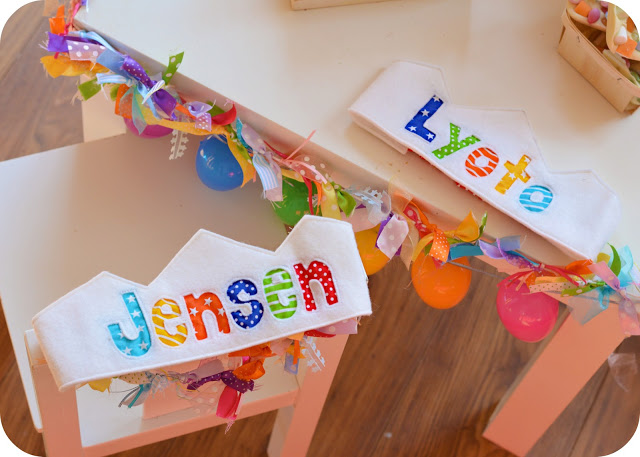 After setting up the tiny white table that the boys have, Excalibur coveted the candy from afar…and sometimes not afar enough for my liking. 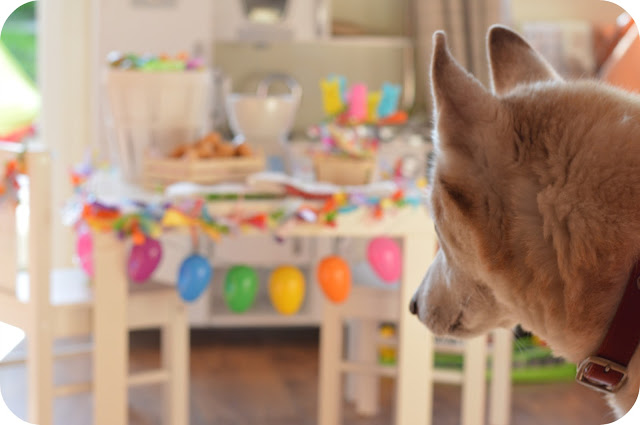 The table looked so pretty, I wanted to hold onto the memory of it, so I took about a million photos of it… Sorry. 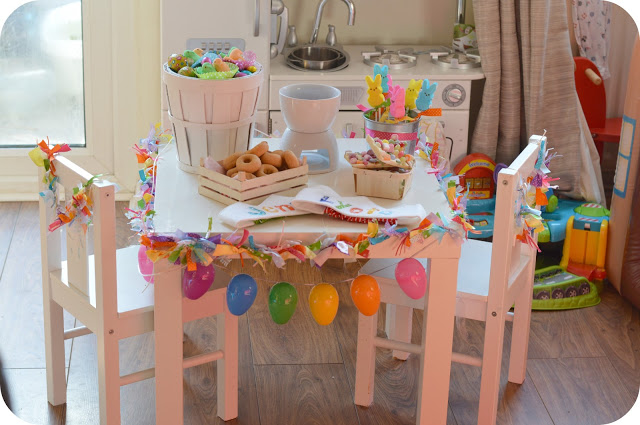 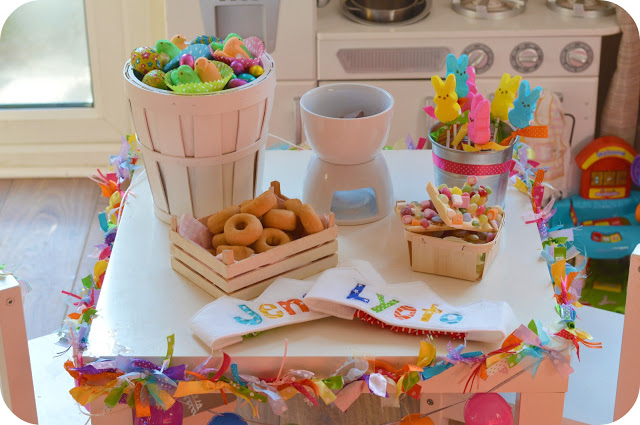 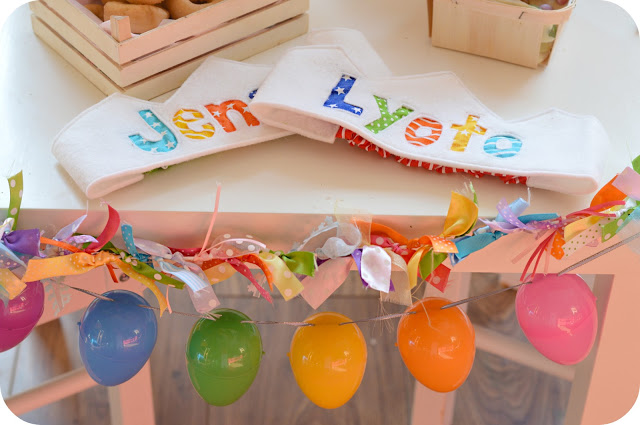 The Easter plates that we bought to add to our Easter tableware were still alive, no chipped chicks in sight (yet)! 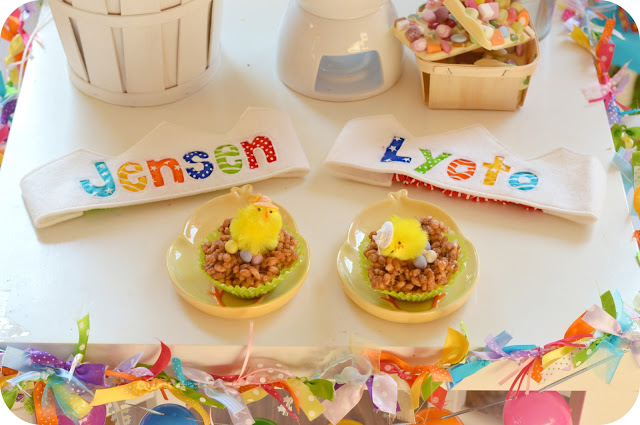 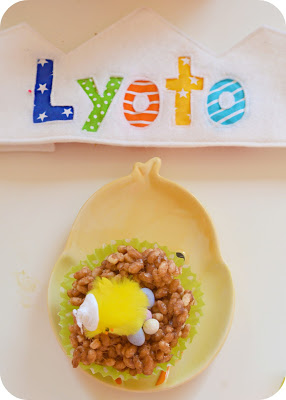 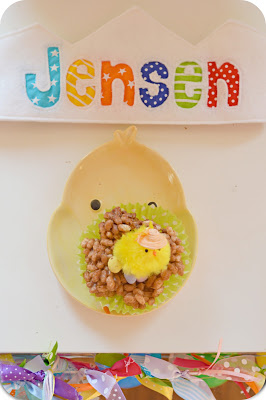 The beautifully crafted bunny bark made its debut on the table. 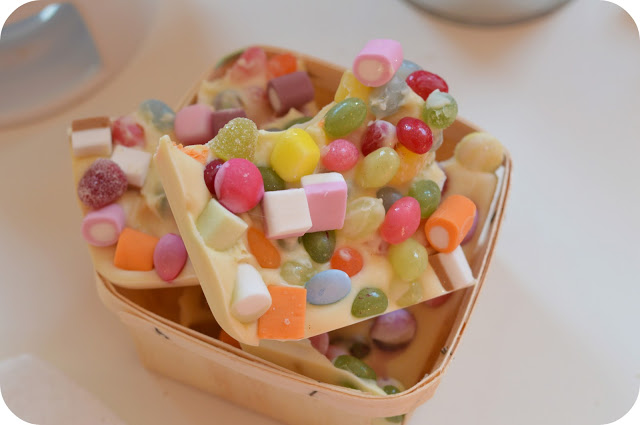 Until the boys returned from the park with Dadda (where poor Jensen had his fingers trapped in the door of the car) the huskies lay guard, you know, in case anyone tried to eat their the boys’ party food. “Anyone” being each other, of course. 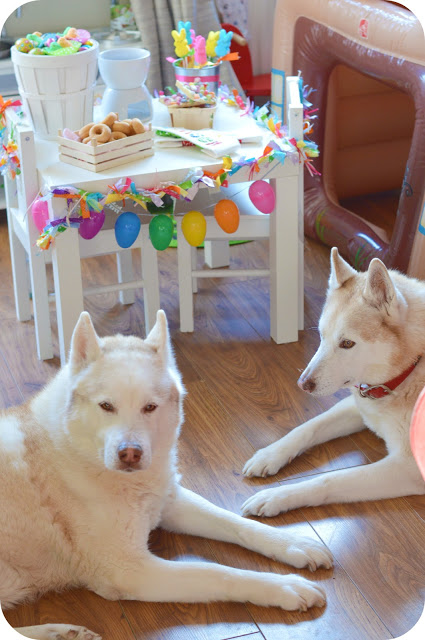 The boys arrived home soon after I put my bottom onto the sofa to relax and when Jensen’s poorly fingers were soothed with cold water, Calpol and Momma cuddles to kiss the hurt away, it was pyjamas on, and time to get the party started!

Looking back through my camera, I realised I lied in my earlier post (and have now dutifully rectified my untruth).  E.B handed out the medals for the Easter egg hunt… 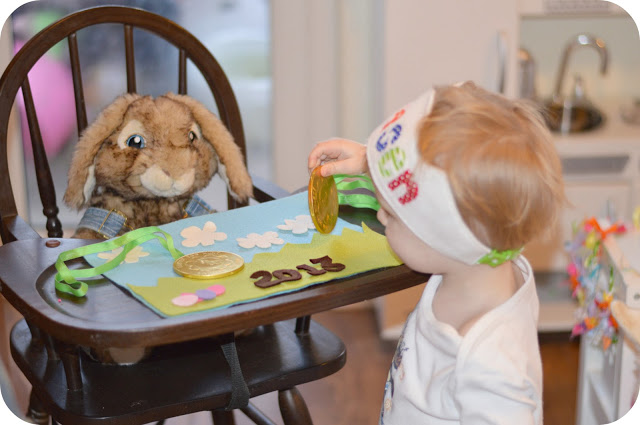 He was pretty impressed with his new found power.  Yet with great power comes great responsibility ~ Dadda and I decided that next year he can put Jensen and Lyoto to bed after they’ve eaten so much candy. 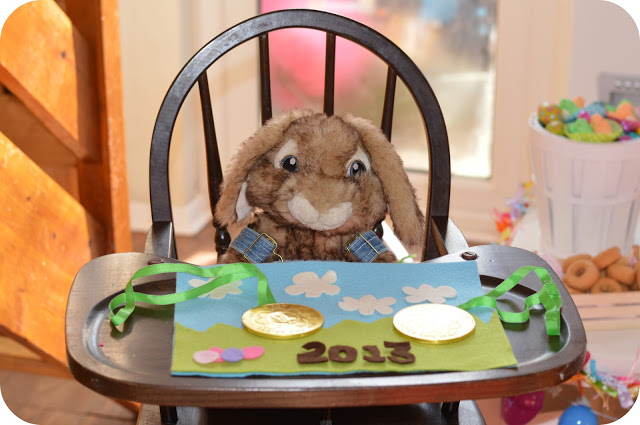 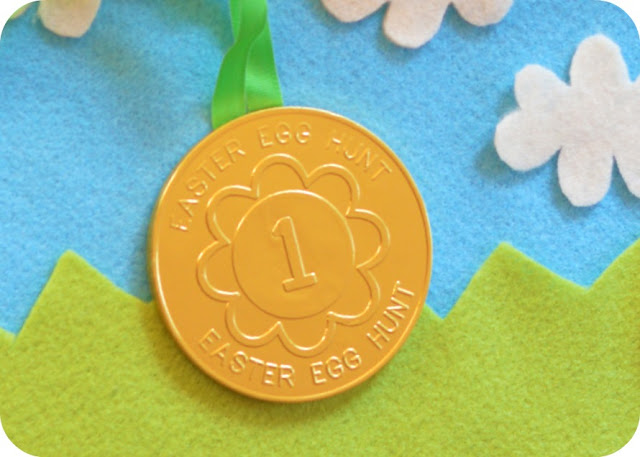 Our Little pyjama clad Adventurer was so happy with his chocolate bling. 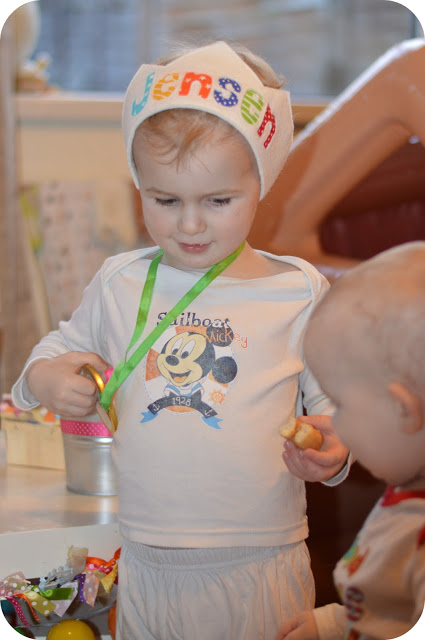 Baby Dragon was thoroughly impressed with the range of peeps within close, Dragony-grasp range. 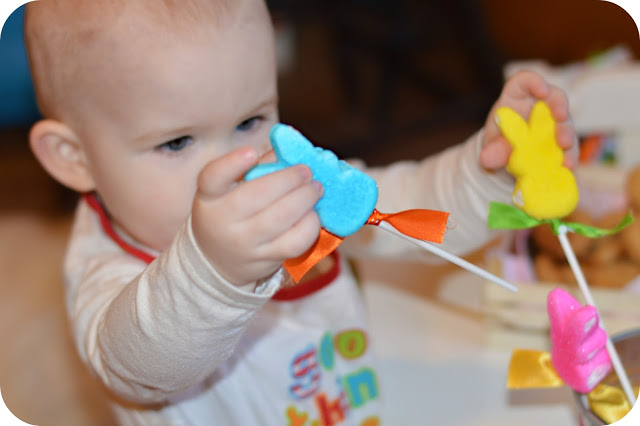 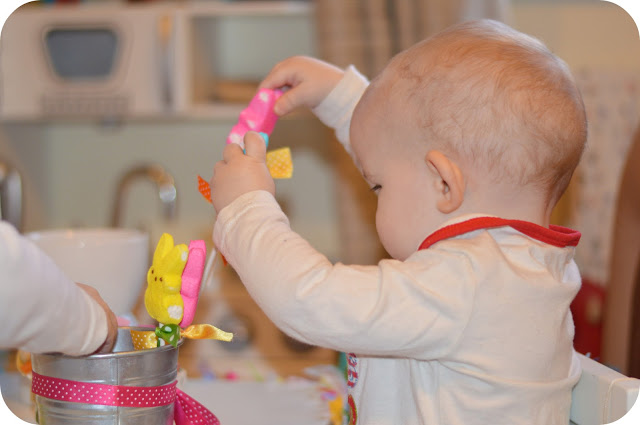 Taking them out, waving them like wands and poking their little sticks into the bucket amused our cutie patootie for quite a while. 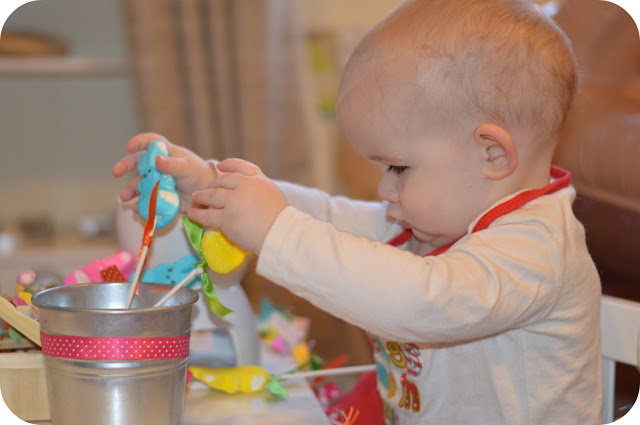 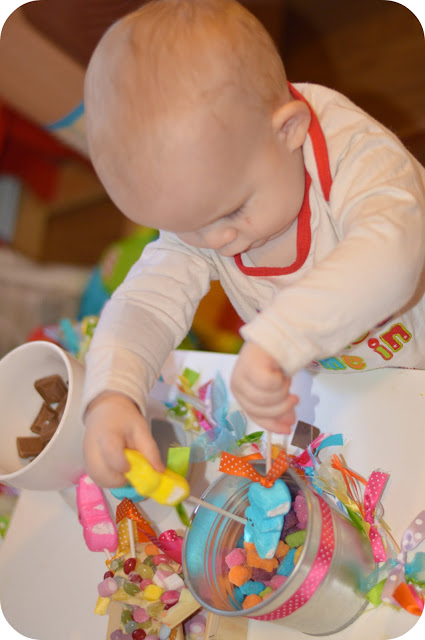 Baby Dragon wasn’t as impressed with the Bunny’s medal as Jensen had hoped and so he decided to crown Excalibur as Lyoto and award the medal to him instead. 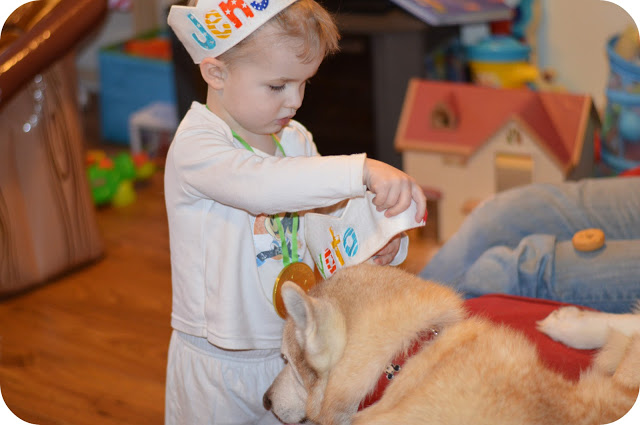 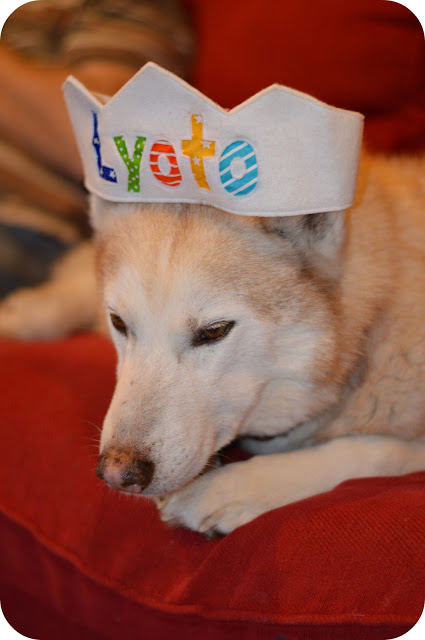 Even Lyoto realised that Excalibur was being used and gave him his Jane Eyre “Badly Done” glare. 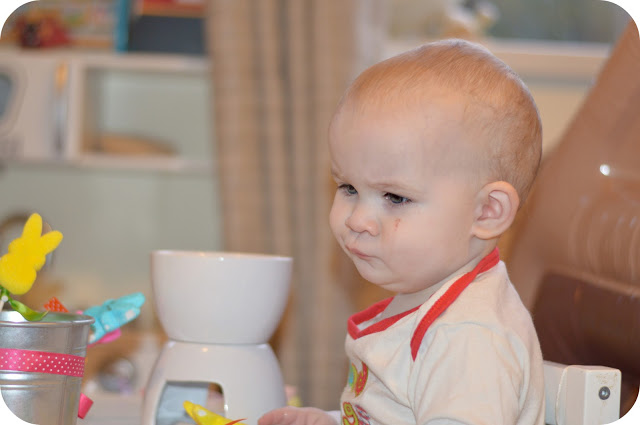 Fortunately for Jensen our huskies will suffer most things for a sneaky nibble of chocolate. If only Excalibur had known he wasn’t actually getting any closer than the ribbon around his collar. 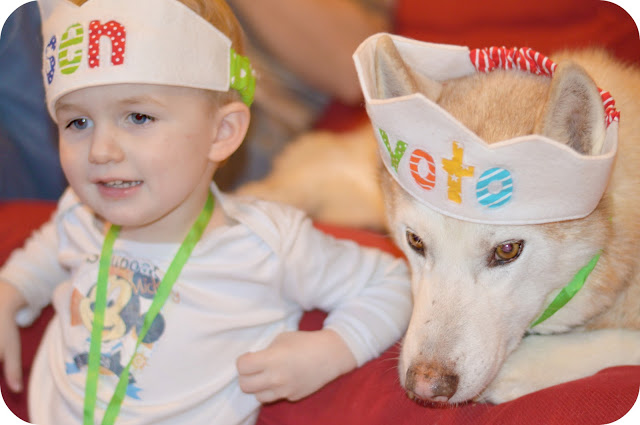 As it was close to bedtime, milk was drunk in cute little bottles with striped paper straws… 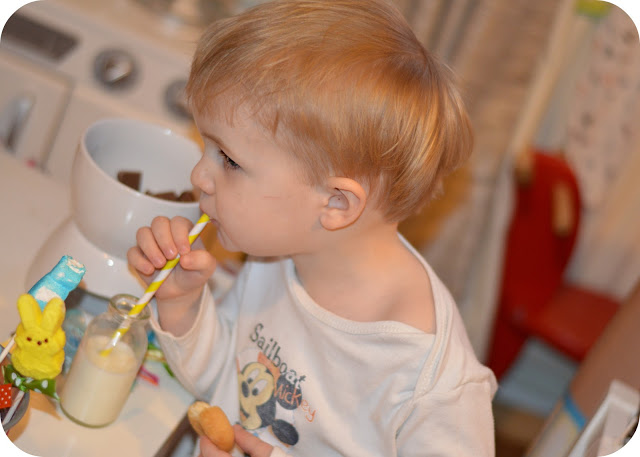 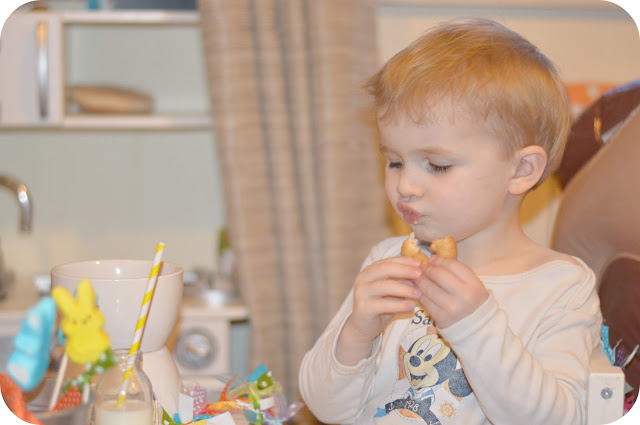 …and good manners were used in seating others before ourselves. 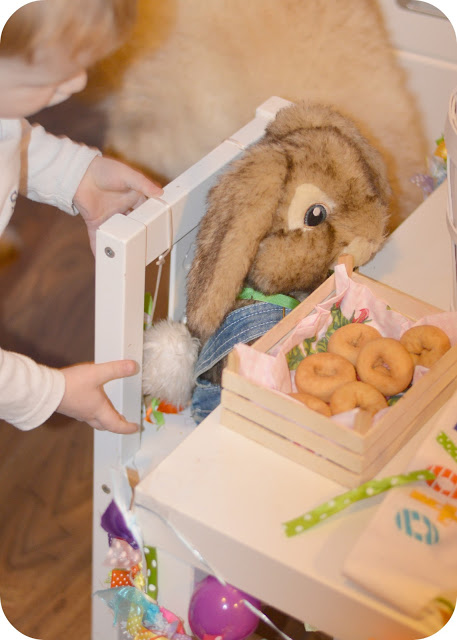 In Jensen Indiana’s words (and those of the recent Easter episode of Mickey Mouse Clubhouse), this was “The best Easter party ever!”  Coming from a 3 year old, you really can’t beat that for a compliment, can you?