SUBSCRIBE TO OUR NEWSLETTER FOR SIX SECRETS TO AN EGG-CEPTIONALLY FUN EASTERTIME AT HOME!
You are here: Home / CELEBRATIONS / Jensen Indiana’s 2nd Birthday Party (2012): Decoration

0shares
The illness in this house and constant bugs floating around combined with lack of sleep are making me crazy.  I just had to edit the title to read “2nd” instead of “1st”.  Thank you, Jane!
Well, even though Jensen Indiana turned 2 on 15th February this year, we decided way in advance that as his little brother Lyoto was due to arrive on nearly the same day as Jensen Indiana was (February 5th, Jensen was February 6th) we’d need to delay his party to ensure that I was there to firstly be at the party and secondly to co-ordinate the party.  I’m sure I’ve mentioned before my love of party organising, and so the thought of missing Jensen’s secondly only ever party was not something I wanted to entertain.  So, we made our calculations like this:
Step One: Due Date:  5th February
Step Two: Add 9 dates of lateness (like his brother): 14th February (Bingo!)
Step Three: Add a week of possible hospital stay (like his brother): 21st February
Step Four: Jump forward to next available weekend: 25th February
So, 25th February it was.  Sadly I was really poorly this time around and although I won’t bore you with it, this time we had several hospital stays in different departments, copious blood tests, neurological tests and a CAT Scan of my brain.  Ultimately no one gave me an answer and passed me around, and the opthamology team (who were investigating my lack of sight and altered vision) seemed to be my last port of call, and they decided that it was hormones.  I’m still on medication for my gestational hypertension though.  But let’s get back to the party.
The invitations were sent out, the hall and party equipment was hired, the menu cards printed and both our families offered to help with the food.  Everything was good, except for me.  However, maybe it was adrenaline, maybe it was just my luck, but my headache lifted for the day of his party and I got it together (with a lot of help in the kitchen from our families).
So, here it is.  The decoration for Jensen Indiana’s party.
Firstly, the cake that nearly never was.  Gav had decided that he would make the cake and was going to make a pirate ship (Bucky). However, with me so sick that never happened and on the day before, he made a rectangular cake.  We took the basic sponge cake with us to the party and decorated it there, 20 minutes before it made its entrance.  Using the frosting design that we bought on www.etsy.com and a it of glitter, Gav and I filled it with Hershey chocolate frosting and sliced strawberries. We popped the candles on top and voila.  The fastest, cutest cake we ever saw.  Jensen loved it.

Cupcakes!  These were the first set of cupcakes that Gavin made (I know, I am so lucky to have a husband like Gavin!)  They were pumpkin with cream cheese frosting topping, and I managed to enlist Chase (my eldest and highly trustworthy with details) niece to sprinkle three types of gold and bronze edible glitter on them, pop gold doubloons in the frosting and seat them in little treasure chest cupcake wrappers, monogrammed with number 2s courtesy of my favourite creator of kawaii cupcake wrappers, Cakeadoodledoo!  I seated them beneath the foil palm trees that we got on eBay and on the raffia mats that my friend Crystal sent me from Oriental Trading. 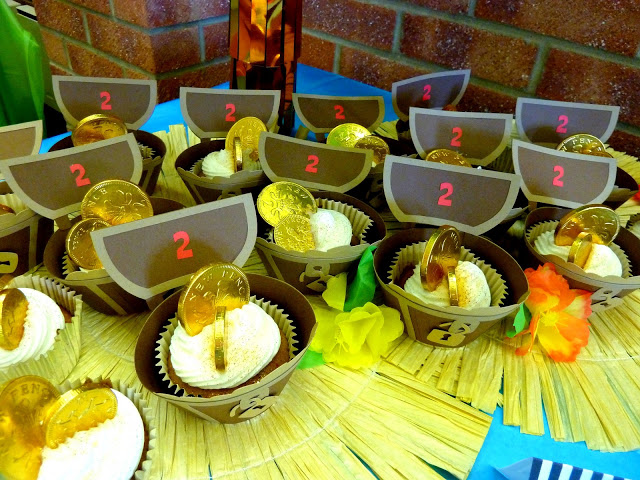 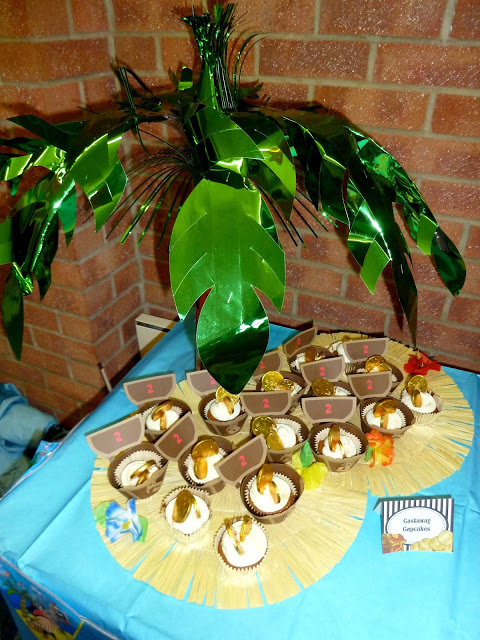 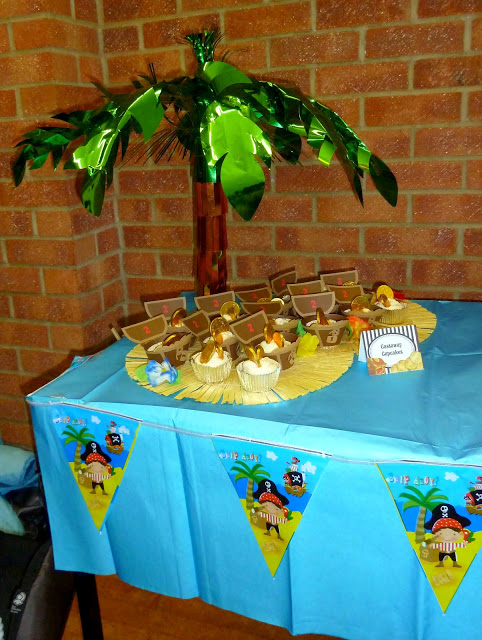 See the pirate bunting? My mum bought it with her on the morning of the party, I loved it!

My sister made me (amongst many more foody things) little jellies in pots too.  So sweet. 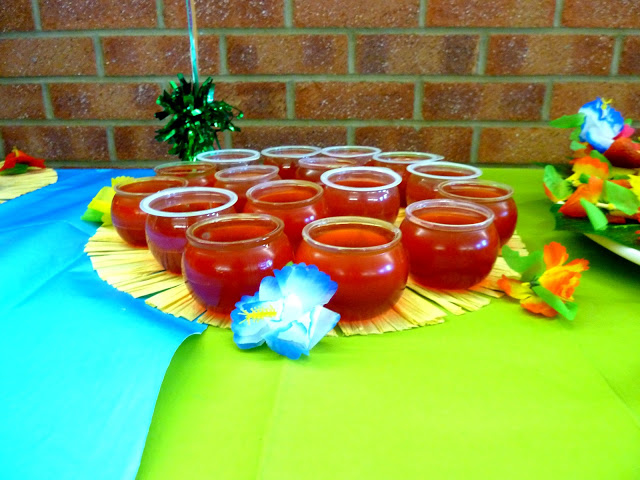 The night before the party, with Lyoto in sling, I ventured into the kitchen and made some chocolate dipped Rice Krispie lollipops.  I bagged them up to look cuter, and my sister assumed I bought them!  I think I ate one or two of these. 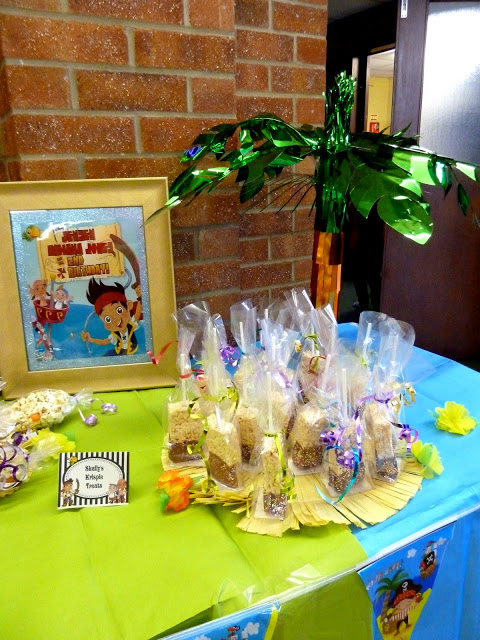 We had this graphic made by a very kind friend on the Disboards and printed it on a 10×8, like we did for Jensen’s 1st party.  It looked so cool and Jensen kept shouting, “JAKE!” at it. 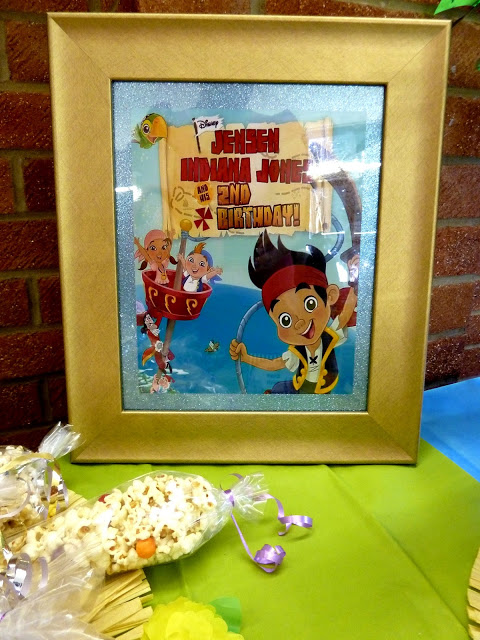 At the bottom there, is some of the popcorn and M&Ms I bagged, and showered Lyoto in during the process.

So I had a few tables set up this time.  This one below was for Pirate Island.  It was supposed to be colourful and like the tropical home that Jake and his friends live on.  There was of course the number 2 balloon.  I plan on getting Jensen these for every birthday. I love them.  I think I have a balloon addiction.  Lucky for Gav, he was with me when I ordered for this party or there would have been more… 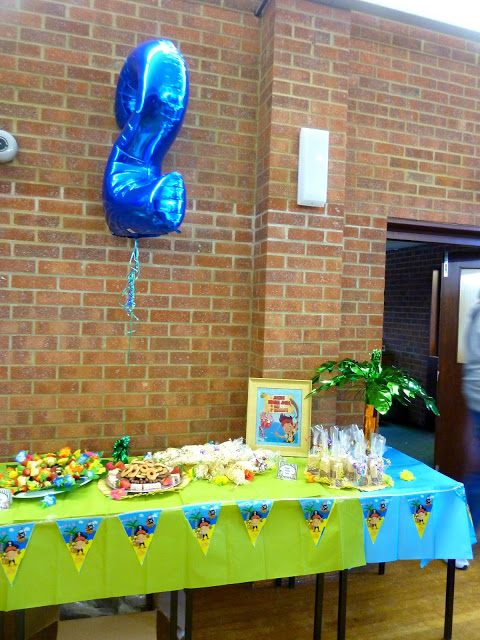 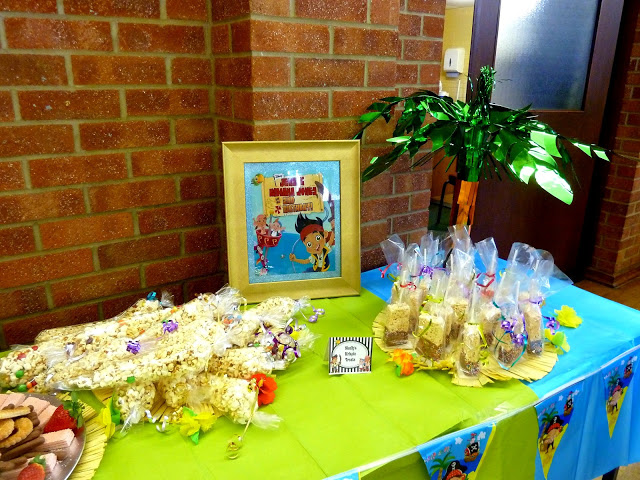 These below were my favourite food item I think.  Although, of course I never got to have one.  The “Neverland Fruit Skewers”.  My brother in law and other members of my family assembled these on my hibiscus skewers and I made sure they were done in rainbow order. Yes, I have that many problems.  I think they worked out so well.  I love rainbow things. 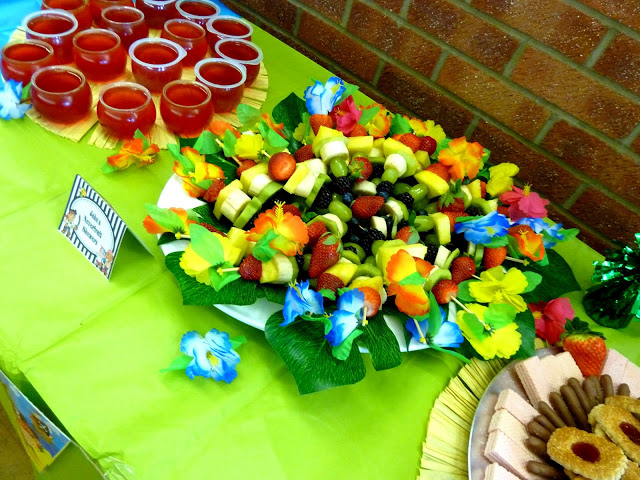 This is the table from far away.  As usual I had about two minutes to take the photos as everyone was already there and I was STILL assembling the party.  So apologies.  I wish they were better too. 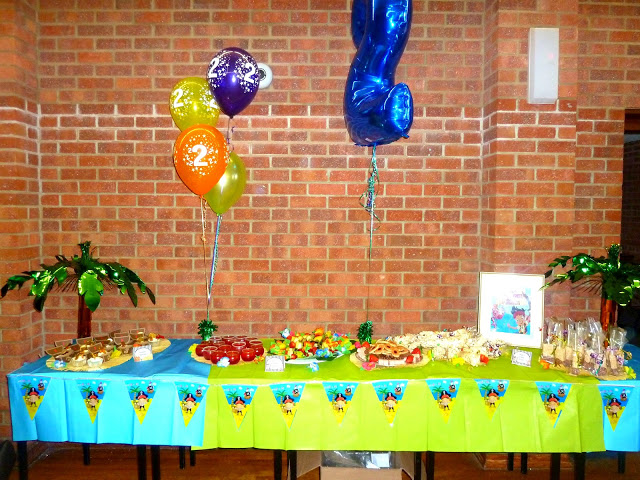 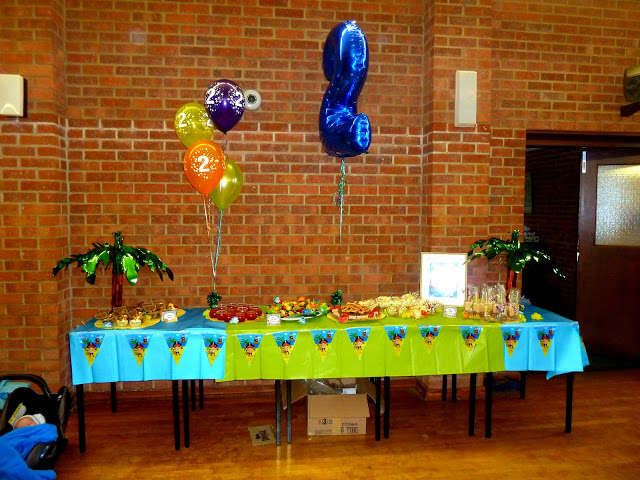 I set up a long red, gold and black table for the pirates to eat at.  Last year the children ran amok nibbling but this year I wanted to make it a little more civilised.  So they had a long red table (which should have been red and black but I wasn’t there to supervise that in time) with balloons and various bits on there. 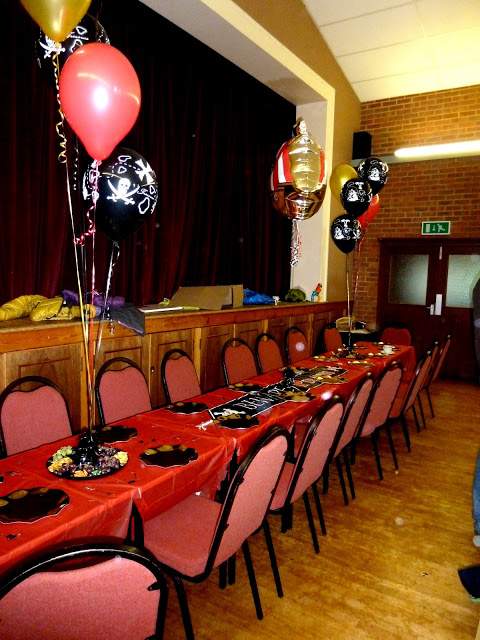 In the centre was a table runner saying “Pirates, Beware” and the table was sprinkled with pirate confetti of little swords and coins and flags.  There were balloons (of course, as Jensen would say), gold plates for the pirates to feast off and grapes, crackers and jelly crocs and skeletons in sectioned plates to nibble on whilst their food was fetched (or if they just fancied a nibble!). 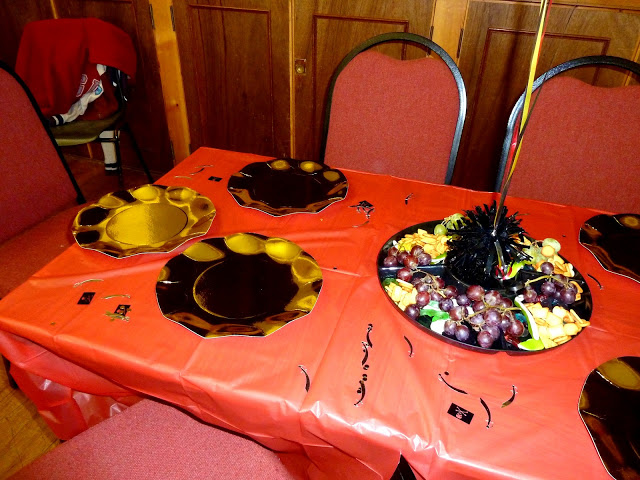 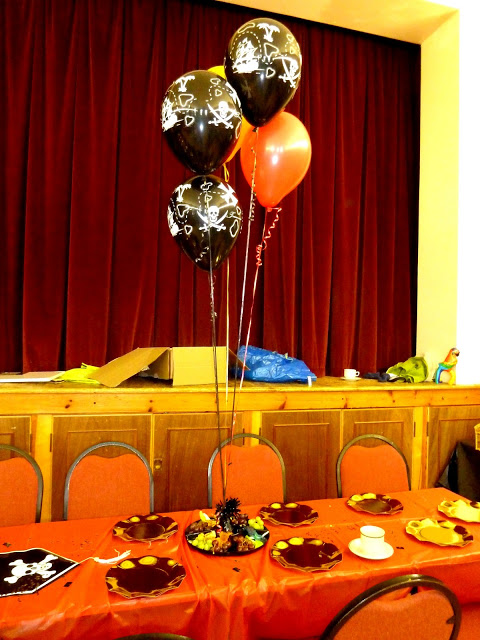 Please ignore the debris on the stage in the background…..  🙁 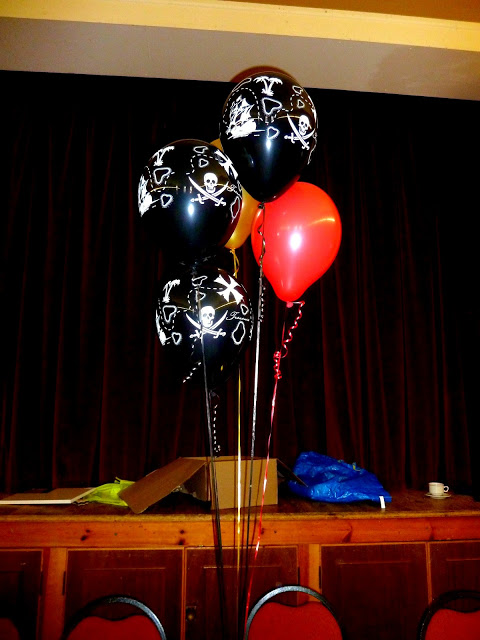 We had 18 children arriving at the party and so the table was pretty long! 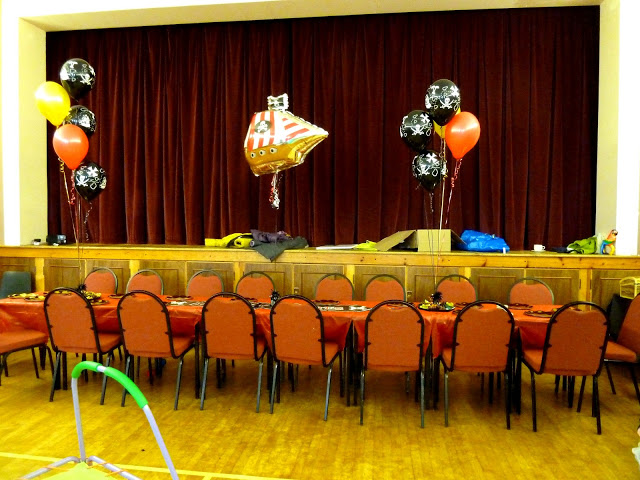 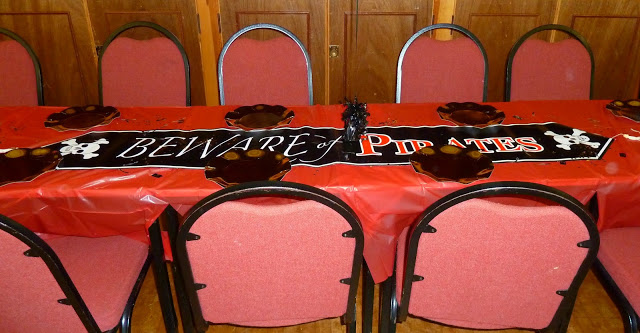 he second food table was the Captain Hook food table.  This had more savoury things on it as opposed to the Pirate Island one which was desserts primarily (and the cake later).

Of course, there were balloons.  BIG ones. 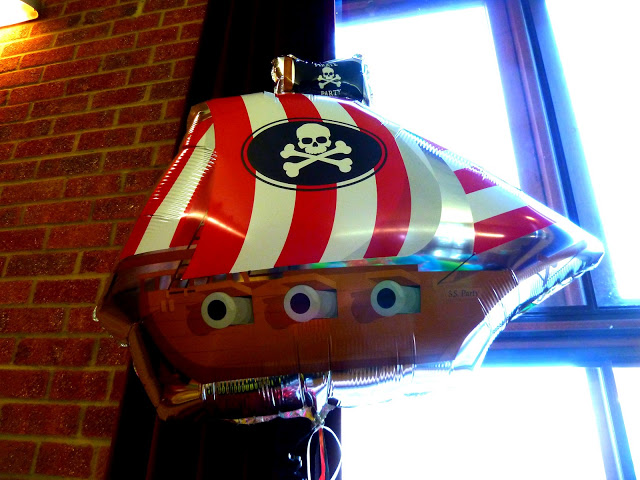 There was also the second set of cupcakes (again, made by Dadda).  These ones were red velvet with vanilla frosting, with pale blue and white dragee pearls (thank you, Chase!) to look like ocean froth.  And yes, again I shopped at Cakeadoodledoo for the cupcake wrappers, and she monogrammed they with a J for free! 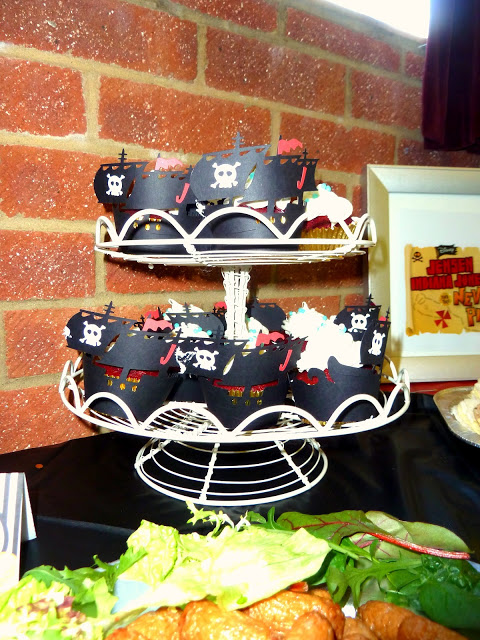 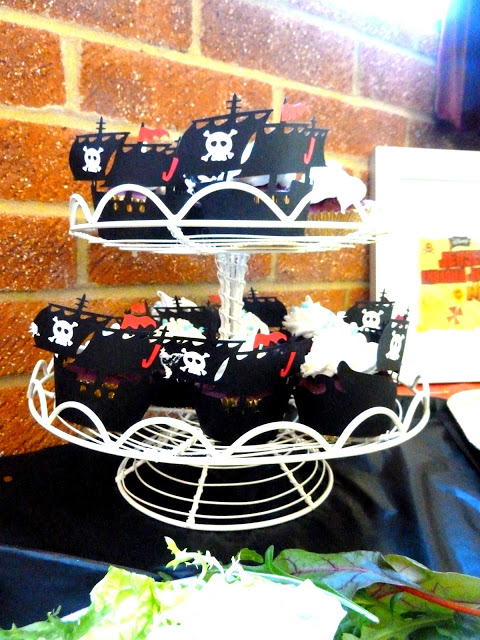 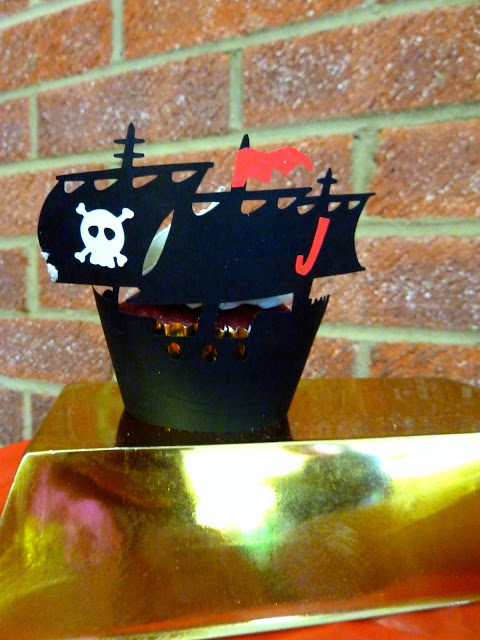 We had, “Shipshape Sandwiches”, “Hidden Treasure Sausage Rolls”, crackers and a whole host of other foodstuffs.  There was much more for the grown ups in the kitchen but I only wanted pretty food (as my sister will tell you I nearly had a fit that, “ugly grown up food” might have been on there.  What can I say? I was stressed). 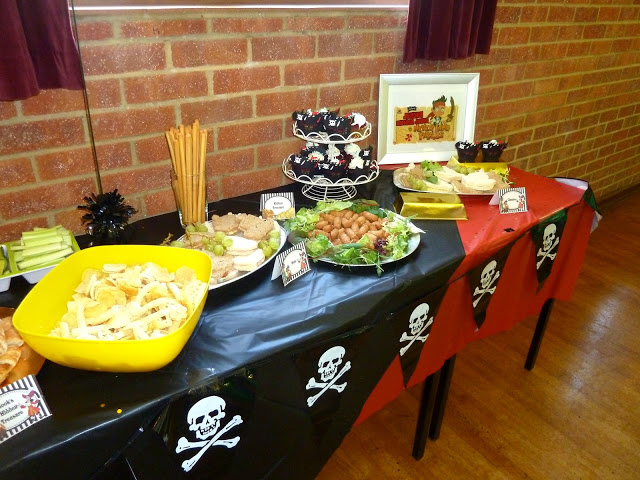 We had another graphic sign printed and some pirate bunting too. 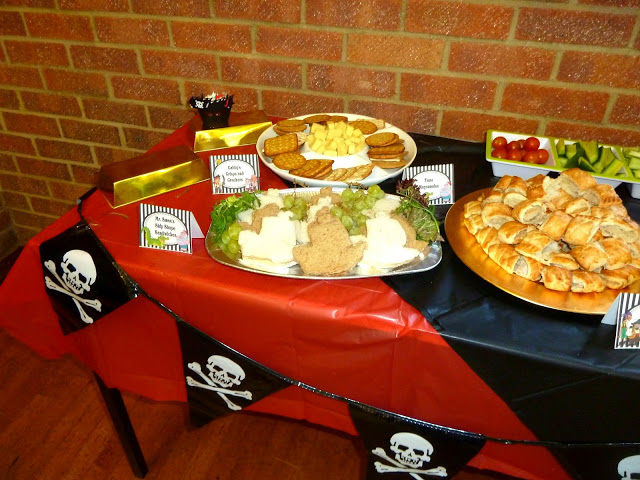 Here’s a photo from far away…. The light did me no favours of course. 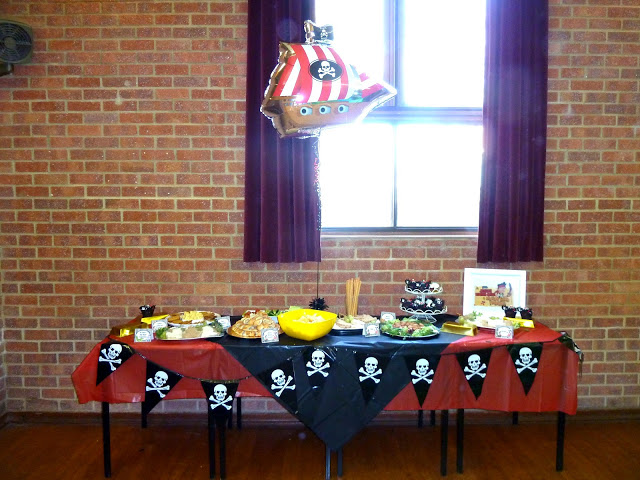 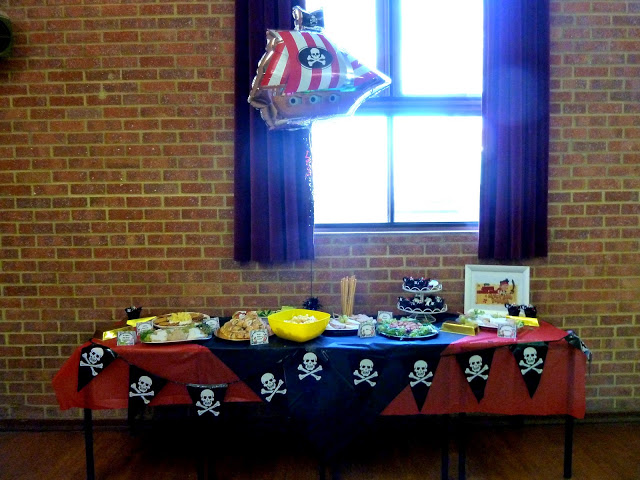 …and now looking at it, whomever put that yellow bowl there is in trouble!

We also had printed these cute little food signs but as luck has it there’s only a photograph of this one, which has none of the characters on.  The others had Tick Tock, Jake and friends on them. 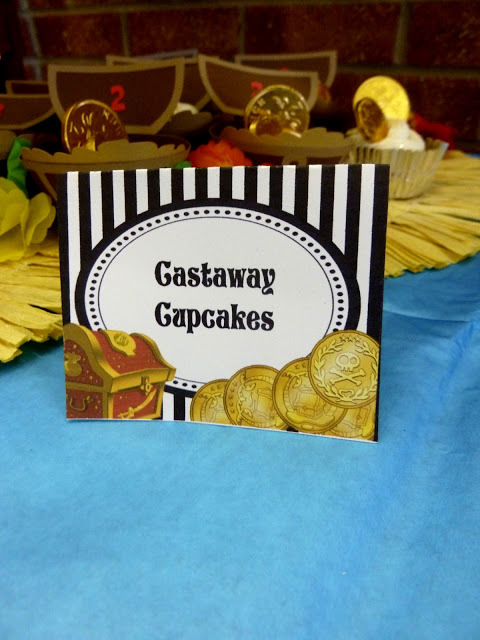 There were other tables that for some reason never got a photograph taken of them!  We had a table with hats and eyepatches for people to wear, a drinks table, and a table for the treasure maps and chest on.  But more on those later.
This was the sign on the eyepatch and hat table…. 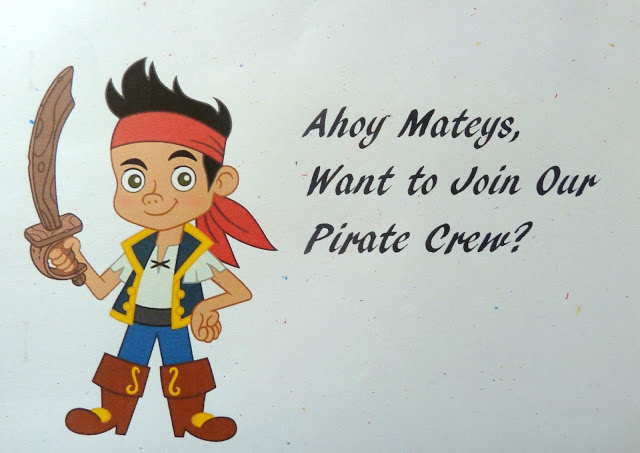 …and this was the one on the treasure map table… 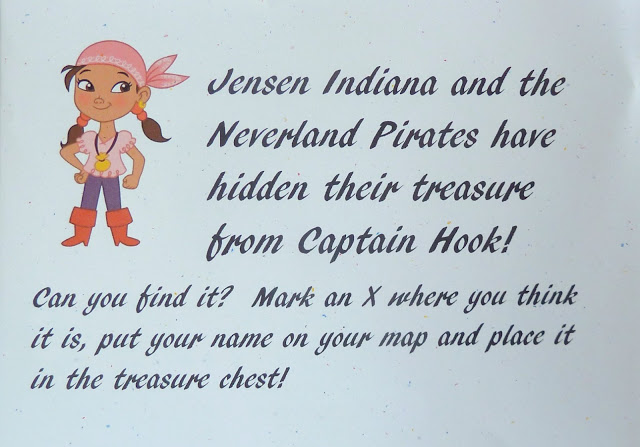 So that was all.  Not everything was how I wanted it and I never got to do most of the extra details I wanted, but Jensen had a great time, and everyone came and had fun.  I’m so grateful for everyone that lent a hand to make the party happen.  More on the party soon!