Today my eldest niece (I have three!) came joint first in her cross country running.  I’m so proud of her.  I love running now (okay, not now, I’m a little on the large side at 38 weeks pregnant, but normally I do), but at her age, a young teenager, I was terrible at it ~ or at least, terrible at running with speed.  I’d get entered in the 1500m on Sports Day at school, mainly because no one wanted to do it and also because I could.  Not fast, you understand ~ I never won it, but I could do it.  Cross country was the same for me.  Not fast, but I had endurance.  The highest position I ever came in at was 14th out of the 100 in our year.

University sparked an interest in sport that I never had before.  I moved to Wales to read Law and with the new postcode came a new sport; rugby.  We were surrounded by it in the valleys and after a few trips to see Pontypridd RFC play with my friends, it looked too fantastic to not try.  So in my second year I took up playing ~ first full back, then winger, then flanker, until I found where I wanted to be; tight head prop.  That was the position I finished my time playing at.  I loved it ~ the exertion, the pain, the nights out after the matches.  There were women of all shapes and sizes on the pitch, every one bringing something else to the game, and it was fantastic to find something I could DO.Sport is a strange thing for children at school.  Either you’re good at it and this sets you up for a school-lifetime of being hero-worshipped, picked for every team and feeling good about yourself every time PE or Games comes around, or you aren’t and you spend your time dreading the subject, forever being the last one to be picked and therefore spending a great amount of time looking at the floor and hoping your friend is a team captain and will take pity on you when it is time to get into teams.  You can guess what I did at school. I knew those carpet tiles like the back of my hand.

Then came running.  Training meant running and a great deal of it for me.  I hated it in the beginning.  Luckily I have an addictive personality (or a very good guilt section in my brain) and so every night without fail, no matter the weather (and in Wales, that would be bad some nights) I would get out there and run.  First of all I only made it to the bottom of the road, and then night by night I built it up until at the end of the year I was running 5 miles a day at night, and 2 miles in the morning, first thing before Law School.  I felt so alive.  I ran for me and everything in my life seemed better.

When I’m with Jensen, if we’re out in an open space (or even in Hobbycraft), I love to see him run.  Run, and laugh, and run until he can’t (or isn’t allowed to) run any more.  He too runs for himself.  He runs because he loves it and he feels great doing it.

I started to wonder when we lose the love of it.  Because I’m sure that all toddlers love the feeling of going fast and crazy ~ but yet my class of seven and eight year olds is already clearly divided into the two camps.  I worry that those who don’t like it, won’t like it for the rest of their school life most probably.  That upsets me so much.  I try to imagine what happens to stop them loving the feeling of the wind rushing past them, the giddyness of going too fast and the relief of catching your breath and pretending to collapse in a heap when you stop.

At what time and why does it stop being fun and start being a “talented-only” remit of the sports elite?  Is it our doing as parents?  Do we dampen their desire to run by restricting them from doing it, or by projecting our own insecurities and feelings onto them?  Let’s face it, with full time jobs and children to raise, not many of us can find the time or energy to go for a jog at night; most of us are grateful for a spare five minutes to sit down and take a breather.

I started to think more about how much of our attitudes our children absorb.  I thought about all the little boys I see going to football matches with their fathers at the weekend ~ all of those little individuals being indoctrinated into watching the sport, the majority of whom will become lifelong fans and do as their fathers are doing when they have children of their own.  Babies obviously aren’t born with a love of watching football, but they learn to love it because of their exposure to it, and because of the attitude of their parent to the sport.

In July 2010, when Jensen Indiana was just 5 months old, I entered the Race for Life.  I strapped Jensen to me in his BabyHawk and off I set on the 3.1 mile race for charity.  I’d ran this race several times before, mainly when I was training for Officer Selection in Her Majesty’s Armed Services, and a couple of times just for fun. 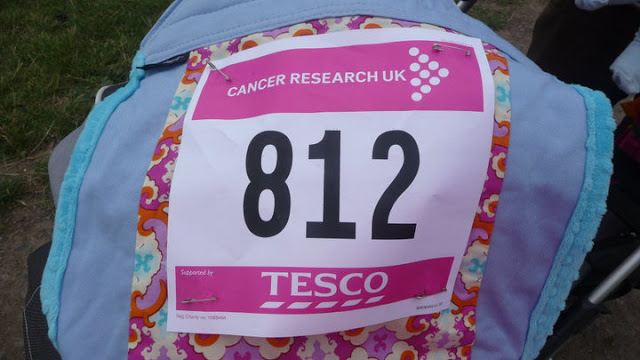 On the day, my eldest niece ran with us (or rather, ahead of us) and my Mum ran with me.  I am incredibly proud of my mum for running ~ with extremely high blood pressure (which is controlled) and having had a brain haemorrhage whilst I was at University, it wasn’t easy for her.  However, we had a blast, we laughed, we had a great time.

I was by no means fit, having given birth a few months earlier, and so after the race I looked like this… 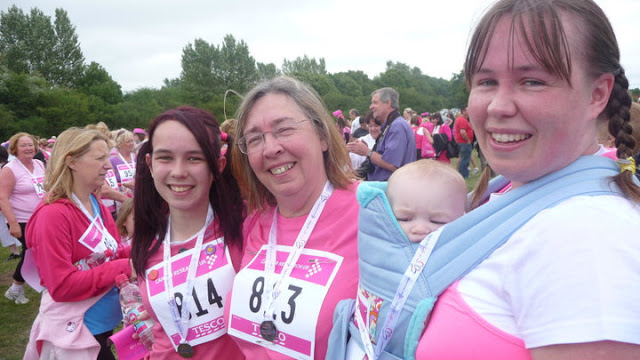 Someone had a good day though…and got his first medal! 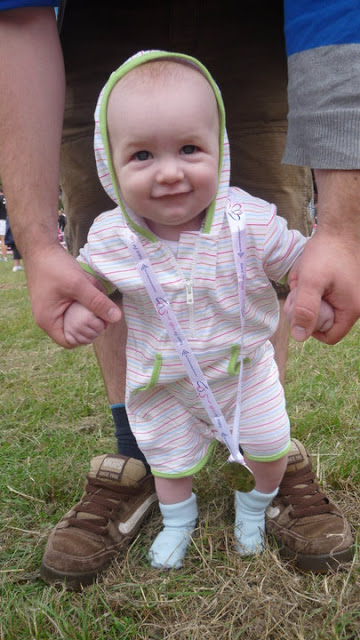 We had a fantastic day, and even though Jensen had no idea what was going on, he saw everyone there with us doing the same thing and having fun. 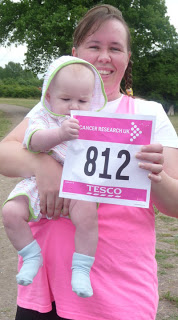 I want Jensen to appreciate that taking part IS all that matters.  I want him to see that Mamma always takes part, but she will never win (unless she happens to be the only one running).  I want him to appreciate that just because I’m not the best at it, it doesn’t mean I shouldn’t do it, try hard and be cheered for my efforts.  And most of all, I want him to know that it’s fun, and that he can do it.  So in that vein, Gavin and I have taken him on several other races (beware, I look more terrible in each race…but remember, it’s the taking part) since he was born. 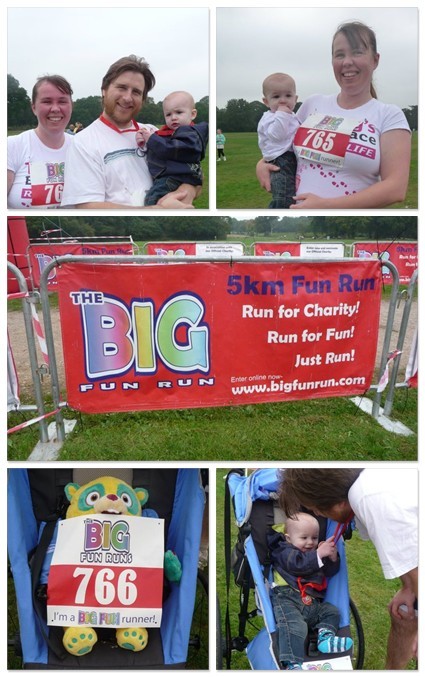 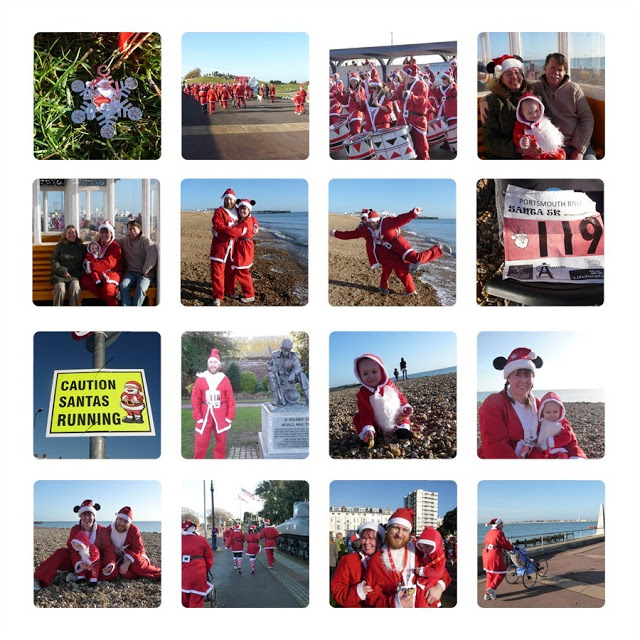 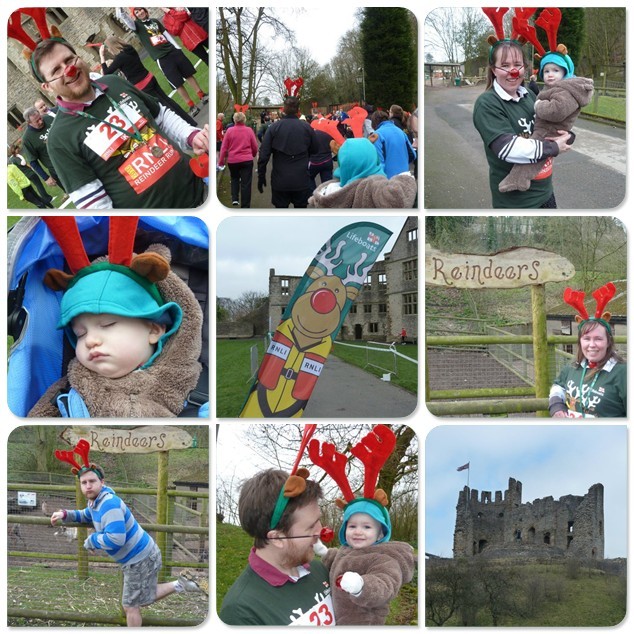 and the Tommys Baby Race 8k… 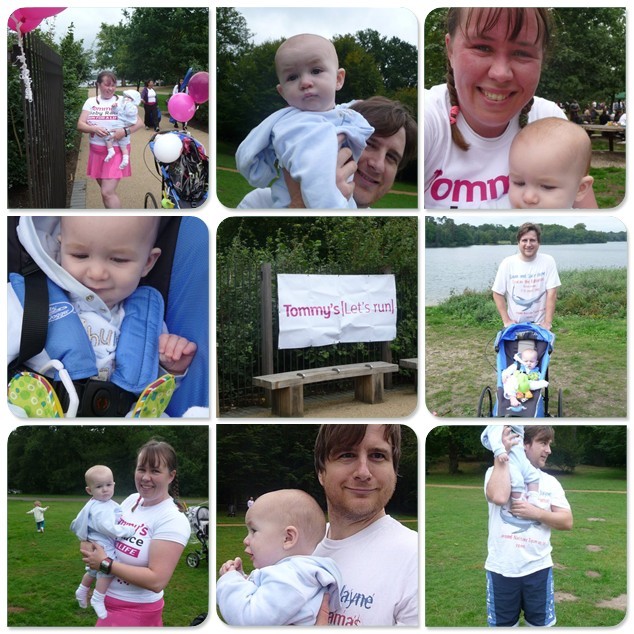 No matter how many races I run though, Jensen will never see Mamma turn down a Parents Race on Sports Day, no matter how slow I am…and I’ll always finish with a smile.